Although agtech promises to make farming more efficient, it is often pitched as a replacement for farmworkers, who are usually left out of its development.

Robots, drones, sensors, autonomous tractors, and other digital technology are appearing like never before in the fruit and vegetable fields of the U.S. Tech startups are quick to make marketing claims about the technology’s ability to do everything from reducing the quantity of pesticides used to addressing global warming.

Take, for example, Mineral, the effort from Google’s parent company Alphabet, which has been in the works at its X “moonshot” lab for the last half decade. Mineral hopes to cover U.S. farmland with solar-powered rovers that use advanced perceptual learning to document and gather data about an unimaginable number of plants.

“With the necessary support and tools, farmworkers can think creatively, find ways to improve the quality of today’s farm work, and redesign farms as better, safer, and more dignified workplaces.”

Mineral is just the latest in a series of companies making big promises about the benefits to farmers and the environment. But they also fail to acknowledge how automation could impact growers, farmworkers, and rural communities.

An alarming number of these innovations are openly targeting farmworkers for replacement. If left to their own devices, these startups would eliminate tens of thousands of jobs across rural America. The wages these workers earn are used to reinvest in the local economy—buying groceries, renting homes, buying clothes, and going out at night—would disappear. Thousands of mom-and-pop stores would lose their customer bases and go out of business.

Today’s agriculture, especially on farms where farmworkers are employed, is in desperate need of innovation to create safer, more dignified work, and technology can certainly play an important role in making this happen. But imagine what would happen if, rather than passively depending on Silicon Valley startups funded by venture capital and private equity firms, we instead put farmworkers themselves at center of this urgently needed change?

The investment sector is clear that their overarching interest in funding ag startups is to have a stake in the next unicorn. Much like Facebook isn’t so much about connecting friends and family but collecting and monetizing large amounts of free data from its users, the current direction in ag tech is about generating a return for investors and harvesting growers’ data.

Instead, why not instead invest in farmworkers, their families, and communities? With the necessary support and tools, farmworkers can think creatively, find ways to improve the quality of today’s farm work, and redesign farms as better, safer, and more dignified workplaces. This approach would increase the integrity of the food supply chain. And finally, such an investment will build the economic resilience of rural communities.

This vision isn’t a pipe dream. It’s one grounded in reality and knowledge that farmworkers know more about what happens in the fields than anyone else in agriculture.

The Deep Roots of Farmworkers’ Knowledge and Expertise

Several years back, Alexia spent the summer working in the apple orchards in Wallula, Washington. She arrived at 4 a.m., spoke to a crew boss, and was sent to thin the fruit on the trees. The farm management gave her no instructions, but she was paired up with another worker, Doña Tere. Tere was in her 50s, had been working in the fields for decades, and taught Alexia everything she needed to know about thinning apples. 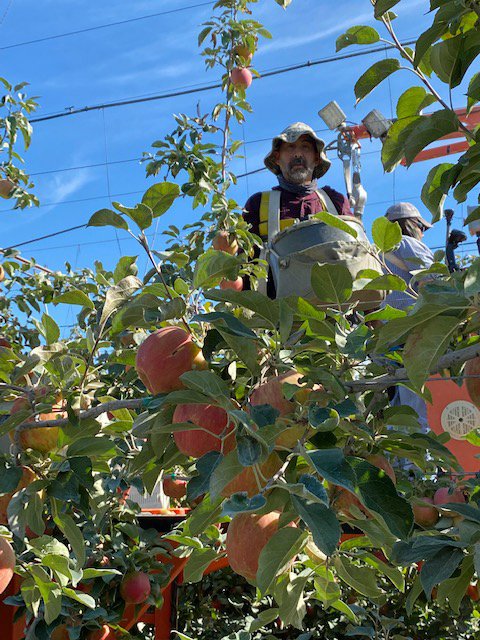 A farmworker picks apples in an orchard in the Washington’s Columbia basin. (Photo credit: Erik Nicholson)

The amount of skill and knowledge that Tere bestowed upon Alexia only confirmed the expertise and talent in their wider community. When Alexia returned to university that fall, she felt transformed. And she has used that experience in her current role working to create makerspaces for farmworkers at a nascent organization called Semillero de Ideas.

Farmworkers see the technology being built around them and many are eager to have a role in shaping it. Take Josefina Luciano, who, like Tere, has spent much of her adult life working in the fields in eastern Washington. She points out agricultural workers are experts in their work and have broad knowledge and understanding to recognize what can improve and function better. She sees a path forward that involves using machines to help make the job less grueling and physically demanding—such as the existing harvesting platforms and conveyor belts seen throughout today’s orchards and strawberry fields—especially in extreme temperatures.

“There have been people who are engineers in robotic mechanics, and they know how to make machines, but they do not have the connection with nature that we do,” Luciano told us. “We’re the people they should be taking into consideration to ensure technology is properly deployed while avoiding replacing farmworkers. These large corporations may be able to replace us where we work, but they’ll never replace our human touch, sacrifice, and essence.”

As the amount of investment capital into digital technology balloons into the tens of billions of dollars, the sheer number of startups and related products has skyrocketed. Investment in ag tech startups has increased 370 percent since 2013, with startups raising $4.7 billion in 2019. Amazon, Microsoft, Google, Syngenta, and others all have agricultural-focused tech startups. There are currently no fewer than 10 different efforts across the globe to create a viable robotic apple harvester, with companies and universities in Australia, Israel, Italy, the Netherlands, and the U.S. all vying for market share.

“I’ve spoken to my co-workers and others in the farmworker community, and they have many ideas to make work better.”

Almost all of these new companies openly market their technologies as labor savings; one company goes so far as to claim its intent “to automate from seed to fork.” Their marketing material discusses the increasing cost of farmworkers, pointing to recent farmworker victories such as their winning the right to paid overtime in California, New York, Oregon, and Washington as a selling point for their technology.

Rather than partnering with farmworkers like Luciano or Tere to increase the quality of work, some tech startups are looking to reduce if not eliminate farmworkers altogether. Farmworkers were called “essential” just two years ago, but that now increasingly feels like a distant memory.

Some will say that full adoption of this technology is still years away. Yet today’s fields have been populated by a small but growing number of robots and autonomous vehicles. And much like a tsunami that is hardly noticeable because it’s in deep water, Silicon Valley’s “disruption” of agriculture is poised to move quickly as it grows into a highly destructive force.

The wages farmworkers earn and the revenue growers generate are the economic lifeblood of hundreds, if not thousands of rural communities across the U.S., Canada, and Mexico. As farmworkers are replaced by robots, the wages and profits they once earned will be redirected to the robot manufacturers, often located thousands of miles away.

In order to deploy digital technology, farmers will need the capital to purchase these products and they’ll also need to modify their growing practices to accommodate them. Securing this increasingly scarce and expensive capital is just the beginning for farmers, as continued use of this technology will also come at a cost.

“I live in an agricultural area surrounded by fields of corn and alfalfa. In less than five minutes, I can drive myself to dairy farms, apple, cherry, peach orchards, and fields of asparagus and squash,” Luciano told us. “There is a small strip mall, restaurants, and a variety of stores. It’s a small town in danger of being wiped out as a result of digital technology.”

Now is the time to reckon honestly with this impending change and to acknowledge that farmworkers have been silenced due in part to a racist system that has chosen profit over people for too long. How do we reconcile the damage that has been done? We can start by giving them a voice in this changing industry.

“I’ve spoken to my co-workers and others in the farmworker community, and they have many ideas to make work better,” Luciano said. “Although in the systems we work in, we are not encouraged to share our innovations, and even if ideas are shared, most of us live in places where we don’t have access to the tools and resources to make our idea come to life. We can help to create a more equitable and cleaner supply chain without fear of being disappeared.”

An important first step is to establish safe spaces that allow farmworkers, their families, and their communities to safely and proudly share their ideas—a space where innovators are recognized by name and reap the economic rewards of their creativity. It could also be a space where growers can connect, recognize, and invest in farmworkers, bridging the historical divide.

Giving workers more of a sense of belonging and value would have a ripple effect on everyone around them and transform the ag community at large. Redefining farmworkers as experts would also create healthier communities and more active participation from them in other realms such as civil participation.

Technology doesn’t have to be a destructive force in agriculture. But with the focus on replacing farmworkers and extracting data from  farmers and wealth from rural communities,  the current trajectory could be devastating. Technology, combined with active worker participation and economic reward, can fast-track the transformation of our food system, making it into dignified work for all.

Erik Nicholson has spent the last 30-plus years advocating on behalf of farmworkers, including 12 years as an elected officer for the United Farm Workers. He is a founding partner at Pandion Strategy. Read more >

Alexia Estrada is a community organizer and daughter of immigrants. She has spent most of her life living in rural Eastern Washington. She currently works to create makerspaces for farmworkers Semillero de Ideas. Read more >