In the face of intensifying weather patterns like the series of storms pounding the West, regenerative organic farms are demonstrating that the key to resilience is working with nature.

In an aerial view, water floods a vineyard on January 09, 2023 in Santa Rosa, California. (Photo by Justin Sullivan/Getty Images)

As California experiences a historic succession of winter storms, most of us will see extensive reporting on power outages, flooding, and mudslides. But amidst the destruction, there is a story of resilience and preparedness that will get less attention. A small but growing contingent of farmers is poised to not only rebound from the deluge of water, but to benefit from it. These farmers have a valuable lesson to share: ecologically-minded, regenerative organic agriculture that prioritizes soil health is critical to our future.

In a region parched by megadrought and greatly affected by human alteration, the landscape cannot absorb rapid, uninterrupted rainfall. Agriculture has overworked much of this state—heavy tillage, lack of crop diversity, and agrochemical use have turned living, absorptive soils into easily eroded dirt.

We have also redirected rivers and waterways that once transected the landscape and built on top of floodplains. And through clearcutting and the deprivation of healthy fire cycles, we have destroyed our forests’ natural adaptation to heavy precipitation. Despite our desperate need for this water, we have greatly diminished our ability to receive it.

This is particularly bad news in a state that produces over two-thirds of the nation’s fruits and nuts and one-third of its vegetables. Though they are suffering from prolonged water scarcity, most of the farms here will see limited direct benefits to their land from the atmospheric rivers hitting the state this season. Many will also suffer crop losses as their fields are flooded and crops in compacted soils drown. And, come summer, they will likely be back to overpumping underground aquifers and overreliance on surface water (as the Sierra snowpack is now melting earlier than it once did).

Despite our desperate need for this water, we have greatly diminished our ability to receive it.

I teach professionals from all backgrounds about regenerative agriculture through experiential education and the farmers I work with are excited about capturing a significant share of this rain on their land. Of course, they would prefer that it come more gently and not all at once, but that is not the reality here.

Elizabeth and Paul Kaiser at Singing Frogs Farm in Sonoma County, widely known for their leadership in ecological farming, have seen their lower lying fields flood 11 out of the last 15 winters due to the hydrology of their land. But instead of causing serious damage, their regenerative methods mean that “the water that hits [their] farm goes into the soil and ground below,” says Elizabeth. That’s because their organic no-till practices, regular compost applications, and diverse crop rotations have added a significant amount of organic matter to the soil, causing it to act as a sponge that absorbs water faster and retains it for longer. So, despite the fact that the soil has taken in over 13 inches since December 26th, Elizabeth says they have been able to start planting their spring crops. 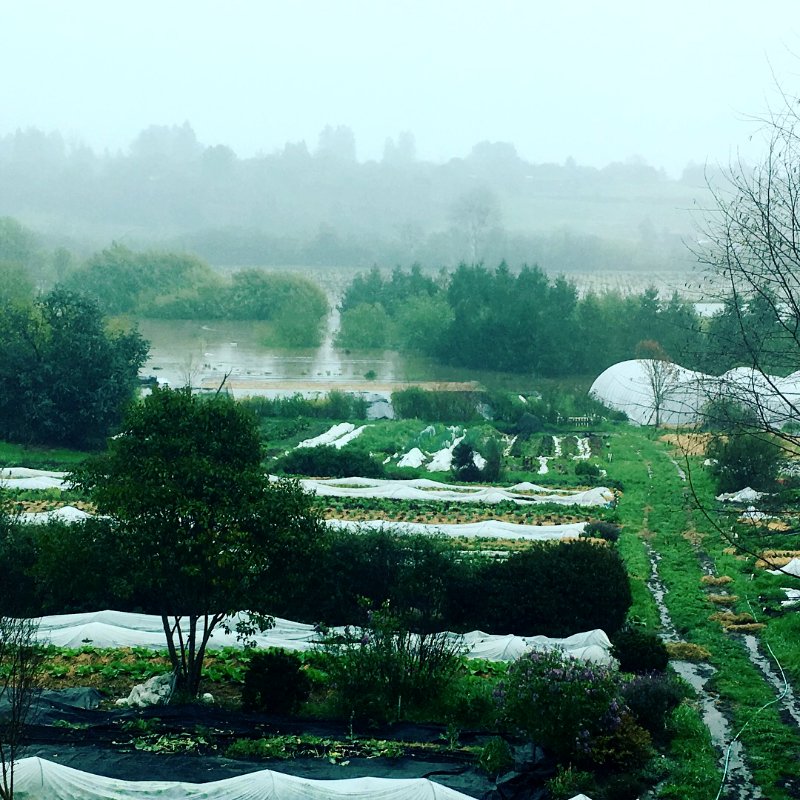 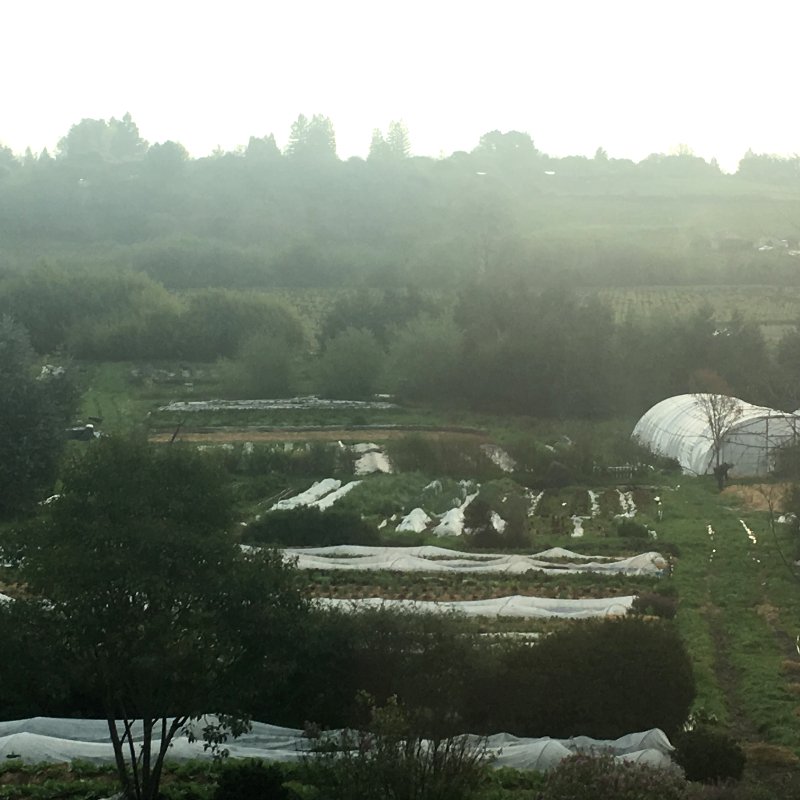 Left: Singing Frogs Farm during a flooding event in 2023; right: 24 hours later, the floodwaters have drained away.

Paicines Ranch, further south in San Benito County, is another leader in regenerative agriculture. Paicines integrates livestock into their vineyards year-round in imitation of natural ecosystems, cultivates biodiversity, and also avoids tilling. Paicines has experienced “no runoff from our vineyard since we began managing it regeneratively in 2017, despite being situated atop a hill, and I am eager to see how our soils perform with more rain coming,” said Kelly Mulville, the ranch’s vineyard director. “The vineyard soils are now capable of holding all the water this past series of storms has poured on it.” (Disclosure: The owner of Paicines Ranch is a financial supporter of Civil Eats.)

Regenerative organic farmers understand that extreme weather patterns are not novel. California’s history is one of drought, flood, and fire that cannot be conquered. Nor should they be; these forces have shaped an abundant landscape, one which has supported human civilization for millennia. But as climate change increases the severity and variability of these forces, adaptation is as important as ever.

Ecologically minded farmers are keen observers of nature. Instead of fighting against it, they harness its natural processes to grow food. Instead of simplifying landscapes, they cultivate biodiversity above and belowground, which creates resilience. The healthy soils on these farms are full of life and decaying matter, commonly referred to as soil organic matter. This life creates soil pores (up to 50 percent of total soil volume) and glues particles together, allowing water to infiltrate rapidly without washing it away or drowning plants.

No one is immune from damage from these storms, but these regenerative farm systems are far more capable of bouncing back.

Every 1 percent increase in soil organic matter equates to 20,000 gallons of additional water holding capacity per acre in the top 12 inches of soil, meaning much of this rainfall will be retained on ecological farms well into the dry season. It is important to note that this organic matter is comprised largely of carbon, meaning these soils are also acting as carbon sinks.

Many are also mimicking the varied vegetation of natural ecosystems with perennial shrubs, hedgerows, and trees that create windbreaks to shelter more vulnerable crops, slow rainfall in canopies to a more easily absorbed pace, protect the soil surface, hold soil in place with varied and deeper root structures, and create shelter for many creatures that contribute to healthy ecosystems.

These farmers may suffer some losses from the severity of this weather. No one is immune. But their systems are far more capable of bouncing back. We have seen this time and time again around the world after extreme weather events. After Hurricane Mitch devastated Nicaragua in 1998, for example, an extensive study of 880 paired plots revealed “better conservation and higher economic resilience” among farms using ecological practices versus their conventional peers.

And when Hurricane Maria hit Puerto Rico in 2017, causing major food shortages, some ecological farms were able to weather the storm and provide food to others in need while many industrial farms were completely destroyed. In California, ecologically-minded farmers will retain much of the water from these storms, freeing up more resources for the rest of the drought-stricken state. 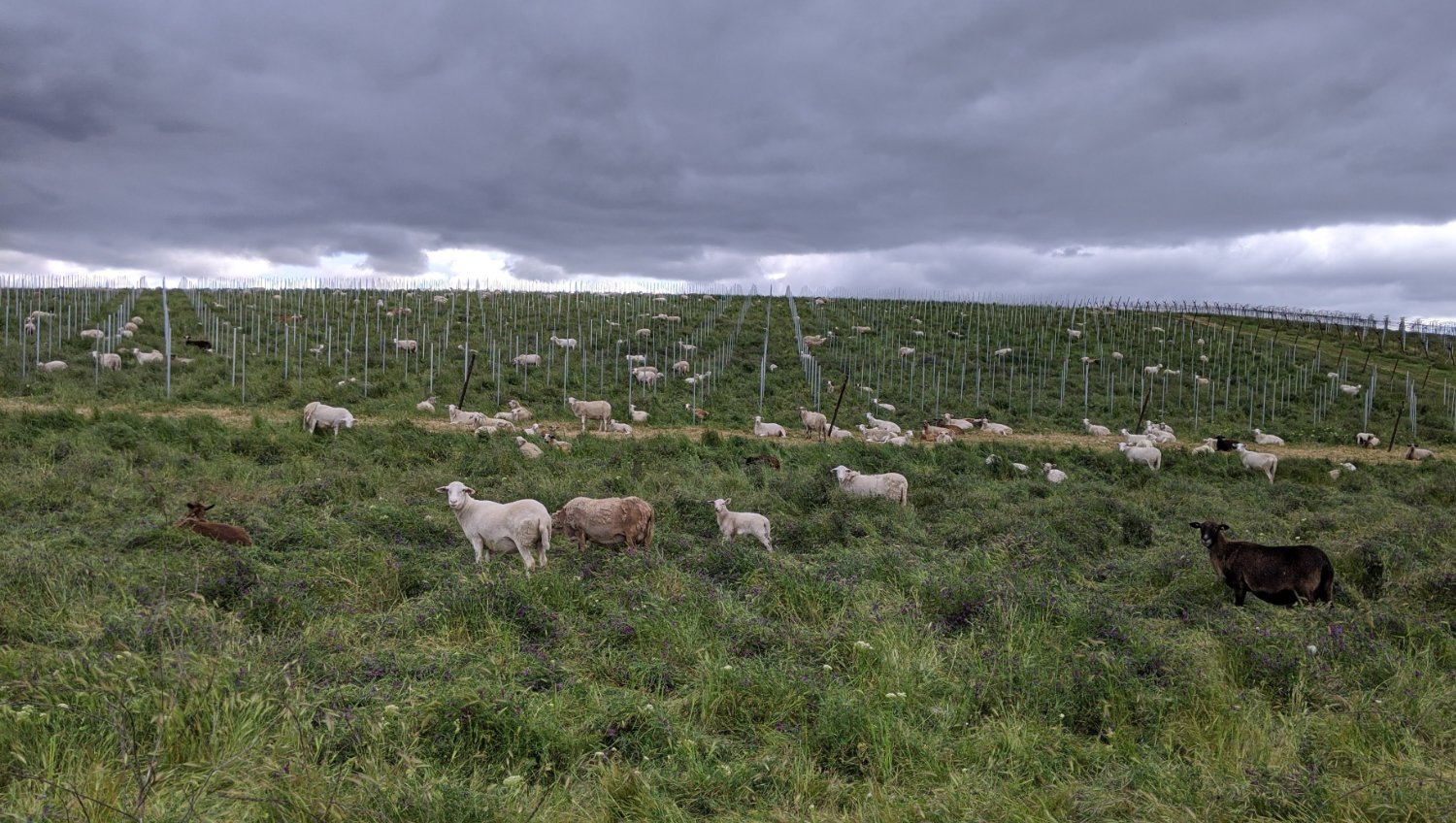 Sheep on Paicines Ranch during a recent storm.

In the face of intensifying weather patterns, regenerative organic farms are demonstrating that the key to resilience is working with nature. Restoring natural processes and regenerating ecosystems, especially healthy soils, is critical to our future. The state has important programs in place to support the adoption of regenerative practices on farms through financial assistance, such as the Healthy Soils Program (HSP) and State Water Efficiency and Enhancement Program (SWEEP).

These programs and the farmers working on the front lines of climate change must be a central part of California’s climate strategy. Unfortunately, in the Governor’s latest proposed budget, HSP, SWEEP, other programs supporting regenerative practices, and composting programs will see significant cuts. This is the wrong direction. We should be increasing funding in these areas instead.

As we strive to cut a collective path toward resilience, it’s important that we take notice of the places that are still flourishing after extreme events and learn from them. Let’s invest in the people and practices showing us the way forward.

Ryan Peterson is an instructor for Climate Farm School at Terra.do and a regenerative agriculture advocate. He received a Master’s Degree from UC Berkeley’s College of Natural Resources, trained as a farm-to-table cook at Chez Panisse, and has collaborated with ecological farms across the country around food systems education. Read more >