“We can look at ourselves as seeds,” said Elena Terry, while chopping a Hubbard winter squash in front of a live crowd at the Smithsonian’s National Museum of American History in the nation’s capital. “How we interact with these ingredients is the way we really should be caring for each other.” Terry is a seed saver, member of the Ho-Chunk Nation, and founder of Wild Bearies, a Wisconsin Dells-based catering nonprofit dedicated to feeding ancestral foods to Indigenous communities and preserving those same flavors for future generations.

It was the first Friday in November—Native American History Month—Terry and her daughter Zoe Fess had been invited to share their family’s signature dish: Seedy SassSquash. The audience watched in awe as the dynamic mother-daughter duo pureed the squash with coconut milk, egg yolks, and maple syrup, stirred the resulting custard over a low flame, and poured it into a series of muffin-sized crusts made with seeds and blue corn before topping it with fresh berries.

The pair were participating in the American Food History Project’s Cooking Up History—a project that has welcomed nearly 100 guest chefs to showcase their heritage through cultural cuisine since it began in 2015.

Museumgoers crammed into open seats during November’s ‘Cooking Up History’ demo at the Walter H. Coulter Performance Plaza inside the Smithsonian National Museum of American History. (Photo by Gabriel Pietrorazio)

Dr. Ashley Rose Young, a Smithsonian food historian overseeing the Cooking Up History Program, said it isn’t “something you’d see on the Food Network,” but rather the cooking demos are designed to be history lessons shared through the lens of food. She eagerly awaited the arrival of Terry and Fess, whose demo marked a defining moment at the museum. “It’s an important milestone to have their voices and stories on our stage,” said Young.

The Smithsonian’s network of guest chefs and community advocates have recently pressed the museum to reimagine Cooking Up History as an educational platform, telling stories about food through advocacy and activism. And Terry’s grassroots work with Wild Bearies—which began as a catering company within the Ho-Chunk Nation focused on serving traditional foods, and has recently expanded to include education and community outreach—fits the bill.

“There is so much healing in truth. Reconciliation comes when you take a stand and say, ‘We are going to share this narrative differently, and we are going to recognize the history more appropriately.’”

Inviting the chefs to share an alternative take on the month of November is an important part of that cultural shift at the Smithsonian: A handful of previous demos spotlighted meals from Turkey Day without any acknowledgement of Indigenous perspectives surrounding the federal holiday.

“Our Native chef colleagues said they don’t celebrate Thanksgiving. This is a challenging marker in their history. It’s a symbol of the Western occupation of their lands,” said Young. “We want to adapt, listen, and change our programs. We’re not doing Thanksgiving-themed programs anymore. I can’t imagine we would ever want to do one again.”

Terry said that unexpected shift has made her feel seen: “It’s incredible. . . . There is so much healing in truth. Reconciliation comes when you take a stand and say, ‘We are going to share this narrative differently, and we are going to recognize the history more appropriately.’”

Although Terry didn’t use the word Thanksgiving during the recent cooking demonstration, she tackled other examples of grief and trauma, including the forced relocation and assimilation of Ho-Chunk peoples. In response, Wild Bearies offers culinary mentorship programming for those suffering from emotional trauma as well as drug and alcohol addiction. And Terry spoke candidly about how seeing food as medicine can provide a pathway for coping with internalized, intergenerational pain through mentorship.

“The medicine is in this—being in the kitchen with my child or saving these seeds,” said Terry. “I am not ashamed to say that I was the first one that needed to come back to my community, and food led the way.”

Mikaila Way, the Indigenous Peoples’ liaison at the U.N. Food and Agriculture Organization‘s (FAO) North American office, said she has been following Terry and is “impressed by her work, but also her strong focus on mentorship and young training.” During the early days of the pandemic, Way partnered with Slow Food USA and Slow Food Turtle Island to publish a cookbook, curating the tastes of seven Indigenous chefs from North America, including Terry.

And that’s why she encouraged the American Food History Project to consider Terry and Fess for Cooking Up History from a list of the nation’s most preeminent Indigenous chefs. “Every Indigenous chef on that list, they’re incredible people and all have stories like this, but the energy and the enthusiasm that Elena and Zoe both bring comes together, and the connection of food and community health is central for her,” said Way.

Terry and Fess are part of the Eagle Clan, one of 12 patrilineal clans within the Ho-Chunk Nation. A few years back, they added four more family members—a collection of teenage and young adult half-siblings and cousins, who had lost members of their family, and were all part of the Bear Clan. Since then, Terry has opened her household to these “bears” as a special space to cook and share meals together. She chose the name Wild Bearies to honor them, and the nonprofit emerged out of her work to nurture a safe, precious space for them all to heal.

“To me, they are all my children, regardless of how they entered my life, and I don’t categorize them any differently,” Terry said. “There’s no distinction now for us, and so it is about them.” 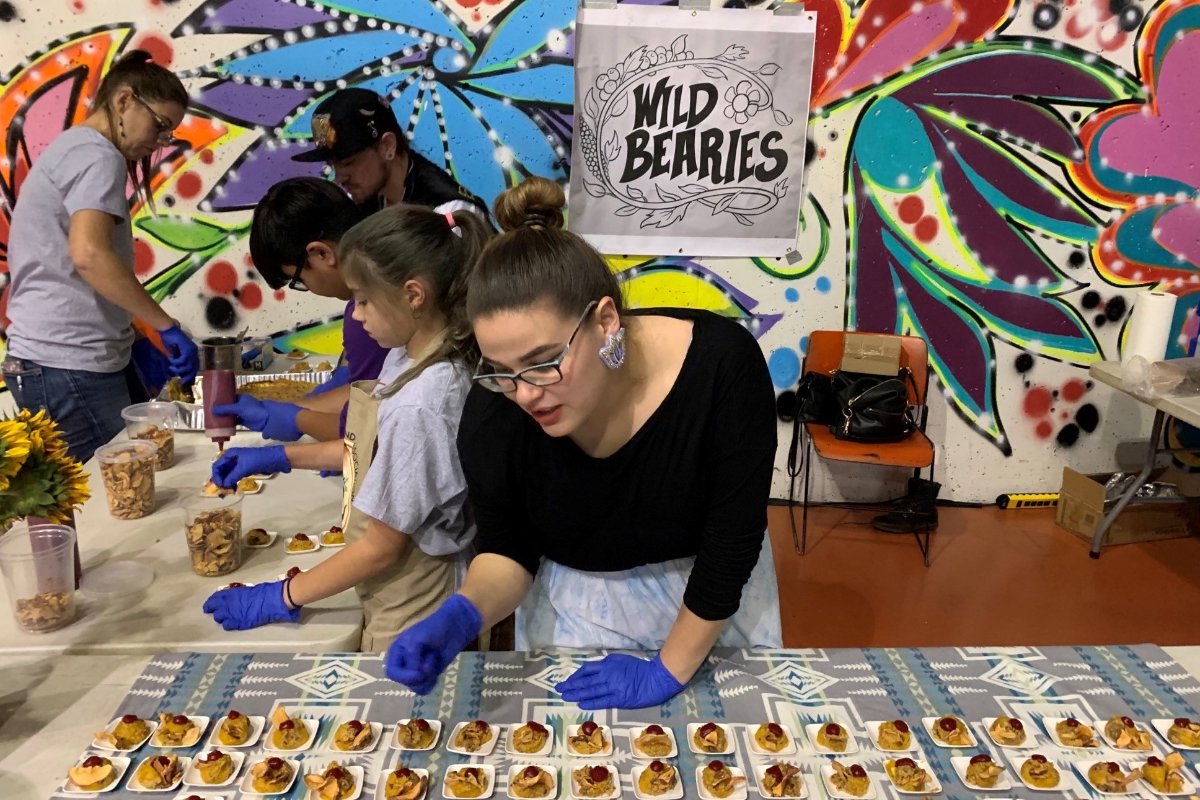 The Wild Bearies began cooking and gardening together in 2018, even though their self-funded operation didn’t officially open until a year later. Thus far, it has been funded through catering gigs, speaking engagements, fellowships, and donations. For example, Anthem Blue Cross Blue Shield has been financially supporting the group’s culinary mentorship and holistic wellness programming. Last year, the NDN Collective named her one of 21 Changemaker fellows from across Turtle Island, affording her the capital needed to earn nonprofit status earlier this year. Wild Bearies in November also received a $10,000 cash prize from a Wisconsin-based social entrepreneurship competition. Now, Terry has begun to apply for additional funding in order to create a permanent space for all of her children.

Terry comes from a long lineage of matriarchs; her great-grandmother Rose Whiterabbit Miner solely communicated in the Ho-Chunk language and exchanged stories while cooking over open fires. When she considered creating the nonprofit, Terry leaned heavily on her grandmother, aunt, sister, and daughter for consultation; and they all became board members once Wild Bearies had fully blossomed. She’s still trying to protect that cultural legacy by centering her daughter as the driving motivation to keep their traditions alive.

Fess is a 21-year-old seedkeeper apprentice learning under her relative Jessika Greendeer at the Minneapolis-based Dream of Wild Health. She’s also a senior at Northern Michigan University and dreams of one day working for the U.S. National Park Service to protect Native lands. At the museum, Fess confessed that she briefly got caught up in the enormity of that live cooking environment but quickly found her footing on the stage—by focusing on her mother. 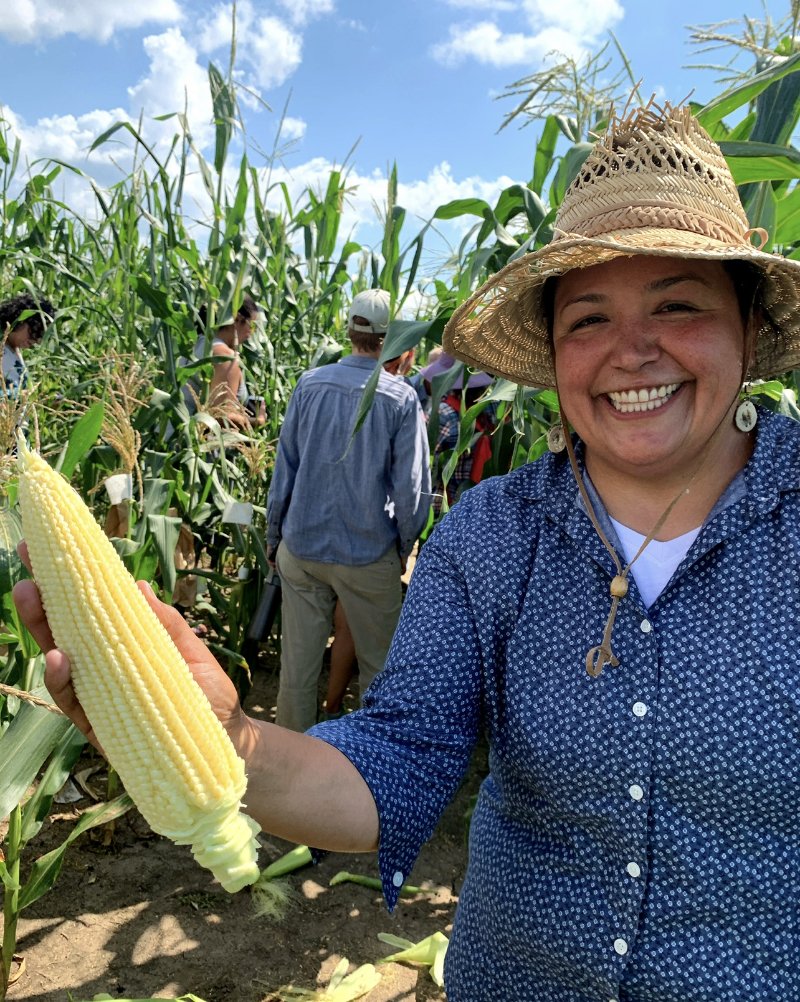 “If I got overwhelmed by the size of what we’re doing, I just looked at her,” said Fess. “I felt comfortable knowing this is our food; this is what we do. It’s no different than us cooking at home.”

Rowen White, the founder of the Indigenous Seed Keepers Network, who is originally from the Mohawk community of Akwesasne, said Wild Bearies’ increased visibility is a testament to the value of intergenerational seed-saving and knowledge-keeping.

“Her work also embodies a commitment not only to our ancestors but a commitment to our living descendants and those yet to come,” said White. “Continuing to build out that legacy and intergenerational mentorship is key.”

Terry filled a temporary role as the food and culinary coordinator at the Native American Food Sovereignty Alliance (NAFSA), staying connected over Zoom through the early days of the pandemic. She sought to “nourish connective tissue between Indigenous chefs from different communities,” said White, who worked closely with Terry during that challenging time.

“[Terry’s] work embodies a commitment not only to our ancestors but to our living descendants and those yet to come.”

Shifting to online mentorship wasn’t easy. Still, Terry kept up with her responsibilities virtually. She even suggested, and successfully implemented, the reallocation of NAFSA’s funds to disperse micro-grants used to “provide healing meals in that time of need,” said White, since in-person culinary programming was no longer possible.

Latashia Redhouse, an enrolled member of the Diné Nation and the American Indian Foods director at the Intertribal Agriculture Council (IAC), said Terry is “humble, genuine, and friendly,” traits that she has used to help introduce her audience to the farmers and ranchers IAC represents. More than 200 IAC-affiliated tribal producers rely on traditional retail venues, farmers’ markets and food stands, but these businesses had to pivot to online sales in 2020.

The Council had launched a certified “Made/Produced by American Indians” trademark food directory in late 2019, to help consumers find trusted Indigenous products. Terry, an ardent believer in the value of Native-made products, has become an ambassador for the directory by spotlighting Native-made foods and ingredients in her cooking demos and through her popular social media presence.

“She really understands our producers,” said Redhouse. “We knew there had to be a way to encourage the next generation of Native American chefs to think about how they can support the inclusivity of our products and use these traditional foods. And it’s great to work with her in that space.”

All these national partnerships and affiliations have meant that although Wild Bearies is a relatively new and small community-based nonprofit, it’s poised to grow beyond the boundaries of the Ho-Chunk Nation. And Terry has lofty ambitions: She hopes to undertake a cross-country tour of Native communities to build on her network of support, expand on their existing gardening projects, and even possibly open their own restaurant one day.

For now, she said that cooking beside her daughter at the Smithsonian was both humbling and rewarding—and a memory that she’ll cherish for the rest of her life.

“I love it when the younger kids, adults even, come up [to talk to us]. Those are the seeds that we’re planting, the literal seeds of intention and healing within communities,” said Terry. “Maybe they don’t grow or manifest until years down the road, but they’re there. I am so very grateful.” 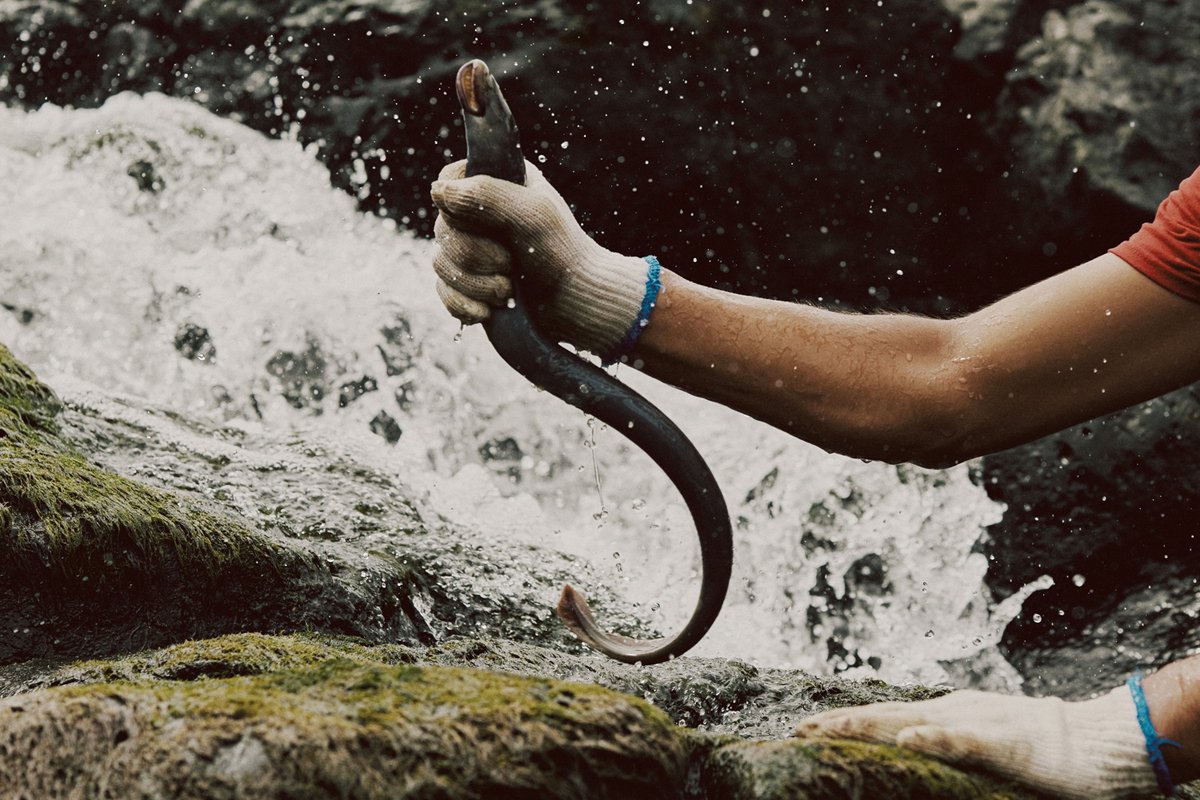