Year-Round Farming in Massachusetts? How the State Is Investing in Solutions. | Civil Eats

The state has funded 487 projects, including geothermal-powered greenhouses and electric tractors, to strengthen its food system and make local production more efficient.

The ability to cram urban permaculture farms into improbable spots and transform these forgotten spaces into vibrant, welcoming, community education and food distribution centers is the genius of Eastie Farm, which Civil Eats first covered in 2019. On an early fall day, the site buzzes with activity. A dozen or so residents with young children line up for their community supported agriculture (CSA) shares while staff quickly sort through boxes of green beans, apples, pumpkins, and corn purchased from local farms. Inside the greenhouse, electricians complete the circuitry for the geothermal energy system that will pump heat, from 450 feet below the surface, to keep plants warm during cooler months.

Season extension—providing fresh, local, nutritious food throughout the winter months—is an overarching goal, as is adapting to a changing climate reality, which is rare for this type of program.

Eastie Farm’s greenhouse will enable the urban farm, which manages three mini-farms and four school-based gardens in East Boston, to extend its growing season and provide a winter classroom for its environmental education program. It expands the organization’s ability to increase food security in the largely immigrant community, with a median household income below the rest of Boston and the furthest average distance to a grocery store.

It is one of 20 greenhouses built at Massachusetts farms over the past two years to increase the availability of locally produced food in underserved communities. A state-funded food security infrastructure grant program, launched at the height of the pandemic, helped pay for the greenhouses, along with 487 other infrastructure projects, ranging from food delivery trucks and freezers to farm equipment to a public housing authority’s vertical farming initiative. The $58 million program aims to make local, fresh food production more efficient and accessible and to mitigate future crises by better connecting local producers and harvesters to a resilient food system.

Ashley Randle, deputy commissioner of the Massachusetts Department of Agricultural Resources, says the program is a national model for “how to shore up infrastructure to build a more robust, resilient food system and local economy.” While it’s too early to measure the program’s impact, she says, “It truly has been transformational to our local food system in Massachusetts.”

Season extension—providing fresh, local, nutritious food throughout the winter months—is an overarching goal, Randle says, as is adapting to a changing climate reality, which is rare for this type of program.

“We’re hearing more and more,” she says, “especially after the last two years with the two weather extremes, that the crops that typically used to survive or thrive in the region may have shorter growing seasons now, or shorter time to harvest, and so farmers have to adapt to those changes.”

Climate resiliency is core to Eastie Farm’s mission, in part because it’s located in a neighborhood that’s vulnerable to flooding and sea level rise. When the urban farm got the idea to build the greenhouse, it resolved to power it entirely with renewable energy, said Kannan Thiruvengadam, Eastie Farm’s director. “We wanted to do something that’s good for the community, but without compromising what’s good for future generations.”

Commercial greenhouses rely on a heat source, such as propane gas, to keep crops warm in winter and grow seedlings in early spring in cooler climates. Greenhouses also use electricity to power large fans for air circulation and ventilation and grow lights during winter. Energy use varies by size, design, and location, but fuel costs are generally greenhouses’ third highest cost behind labor and plant materials.

Geothermal-powered greenhouses are more common in regions with hot springs, but they’re rare in the East, which only has “low temperature” geothermal resources—that is the earth’s constant heat of about 55 degrees Fahrenheit at a depth of 10 feet or more. Eastie Farm’s geothermal system will harness this heat year-round, keeping plants warm in winter and cooling the space in summer when temperatures outside can top 100 degrees. Providing that natural cooling will reduce the need to run fans in the summer. 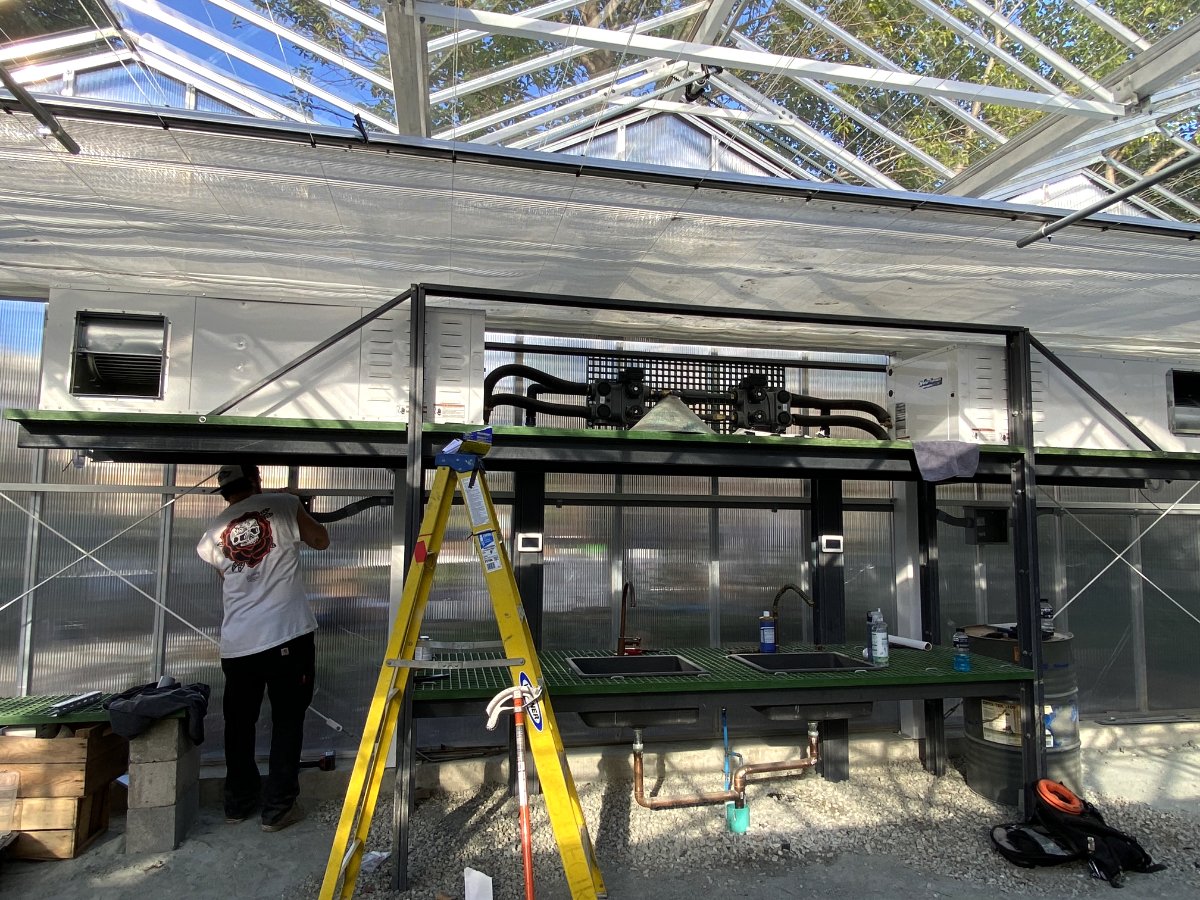 An electrician works on the connection to the geothermal hydraulic system at Eastie Farm. Above is one layer of solar shades and the roof that opens. (Photo credit: Meg Wilcox)

Eastie will grow its own seedlings and greens like kale, arugula, and spinach in winter, Thiruvengadam says. It’ll also eventually grow subtropical and tropical fruits, such as Zapote and avocado, and tree saplings in response to community requests.

The environmental and community education programs being planned at the greenhouse are equally important, says Sebastian Tabares, manager of one of the urban farm’s sites. Tabares says he teaches East Boston elementary school children how to “come back in tune with earth” when they’re feeling stress. “I’ve seen the change that it has on kids.”

Built of glass, polycarbonate, and metal, the elegant 1,500-square-foot greenhouse was designed by Dutch company Gakon Netafim. Its energy and water management features include a roof that opens to let hot air out in the summer; two layers of shades for passive heat management, including blocking solar energy on hot days or retaining the sun’s heat on cold days; and gutters that run across the roof’s ridges to channel rain or snow into a 500-gallon, black rain barrel tank inside the greenhouse. The tank provides irrigation water and acts as a thermal mass, radiating solar heat absorbed during the day at nighttime.

Water overflow will be diverted into a mini-aquifer Eastie created by excavating and replacing impermeable clay underlying the site with a fill that allows water to percolate downward. “We won’t be sending water into the city’s storm drains,” Thiruvengadam says.

Winter grow lights and the geothermal pumps will be powered with 100 percent renewable energy through the city’s Community Choice program.

“We don’t really have a lot of fossil fuel input. We don’t have a tractor . . . so getting a greenhouse that we would be heating with propane throughout winter just felt not in line with what we are doing.”

Farm co-owner Laura Tupper-Palches plans to grow salad mix, bunching greens such as kale, and radishes and turnips in the metal and double-insulated poly-roofing greenhouse. The fresh vegetables will supplement the root vegetables in their winter CSA, which is available regardless of income in collaboration with local organizations. The farm also delivers to low-income residents and sells at the North Adams farmers’ market, which has a SNAP matching program.

“Customers are very excited to have fresh local stuff in the winter,” she said. “North Adams doesn’t have a ton of local shopping.”

Tupper-Palches also installed a simpler type of geothermal system in the greenhouse called a “climate battery.” It draws warm air from the soil about eight feet down, heating the greenhouse above freezing during the winter, trimming its propane use.

“We did it to reduce propane,” she said. “We don’t really have a lot of fossil fuel input. We don’t have a tractor . . . so getting a greenhouse that we would be heating with propane throughout winter just felt not in line with what we are doing.” 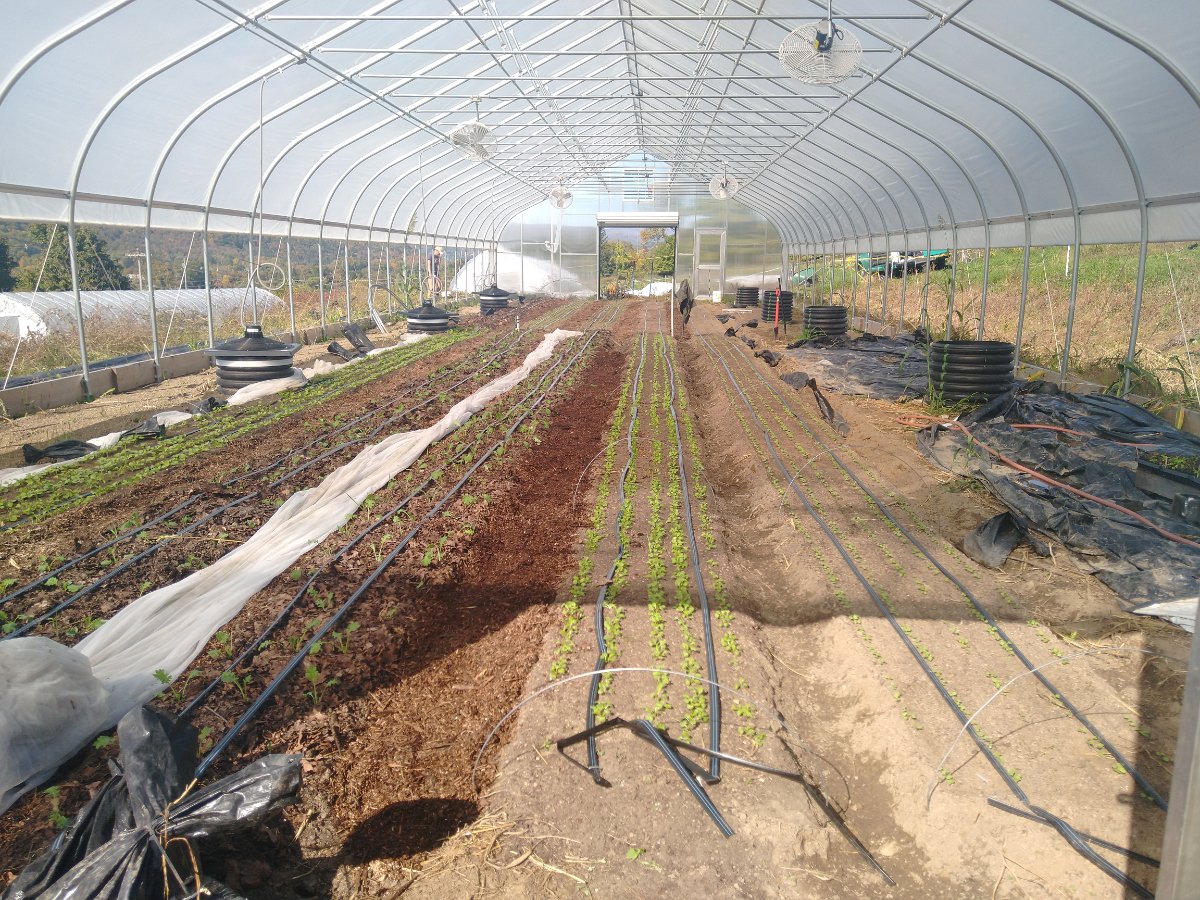 Full Well Farm’s climate-battery greenhouse. The black coiled structures along the sides are where the heat comes up from the ground. (Photo credit: Full Well Farm)

In the summer, fans push the hot air down into the soil, “recharging the battery,” or reservoir of warm air in the soil. 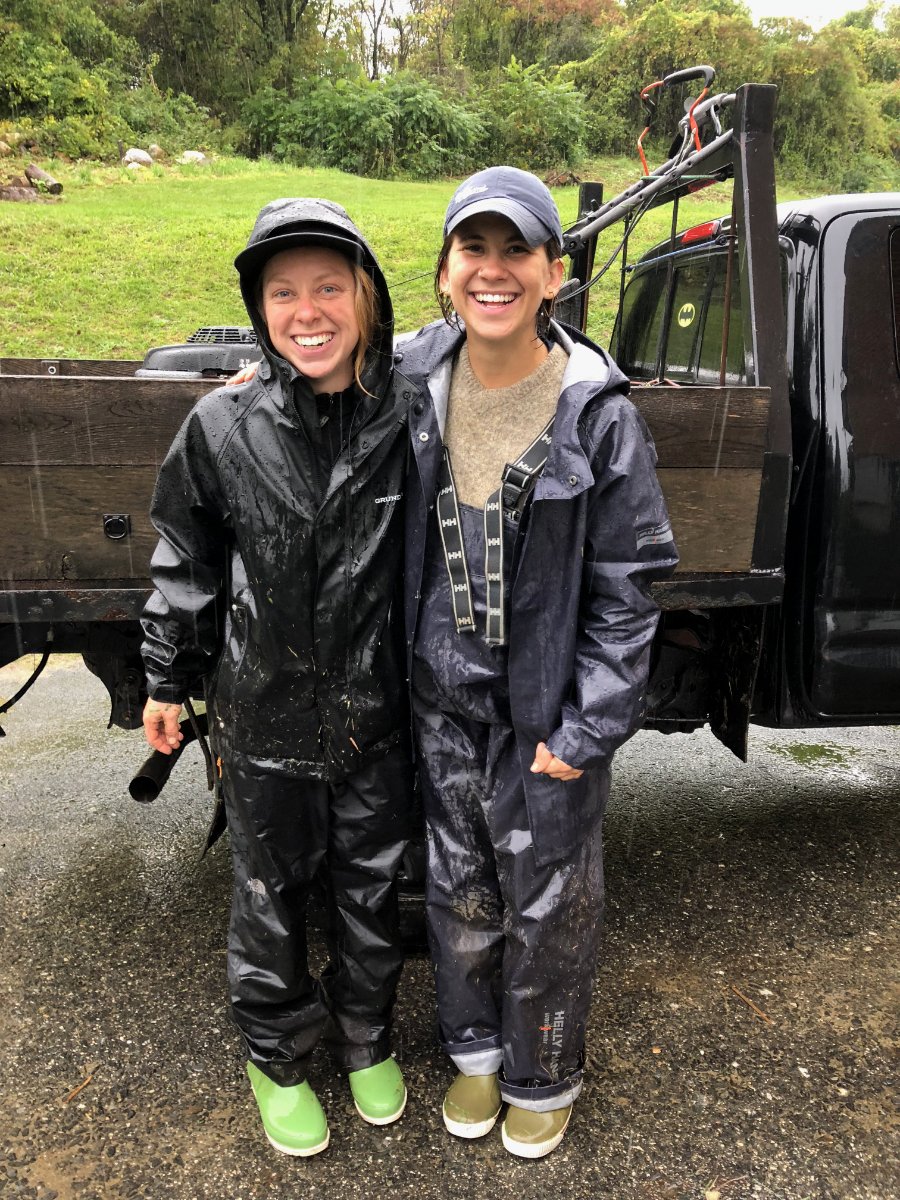 “It’s going to be a big learning curve,” said Tupper-Palches. “You turn the fans on when you want to force the hot air back up, so we control how quickly we draw down what has been stored. You can turn it off on nights that are really cold and use propane instead [to avoid using stored heat so quickly].”

Eventually, she’d like to install solar on her farm as its electricity source.

The state grants funded more than just greenhouse projects. Although The Food Project has operated a 10,000-square-foot greenhouse in Boston for the last 20 years, the group used a state grant to purchase farm equipment for its Reynold’s Farm in Wenham to improve soil health, protect crops from extreme weather, and expand food production and access.

Reynold’s Farm purchased an electric tractor, irrigation equipment, soil fertility amendments, and a farm truck for transporting fresh produce to neighboring communities. The purchases will expand the organization’s ability to provide fresh produce to food-insecure families. For example, it created a mobile market with the new truck, making numerous stops around downtown Lynn for people who do not live close to a grocery store. 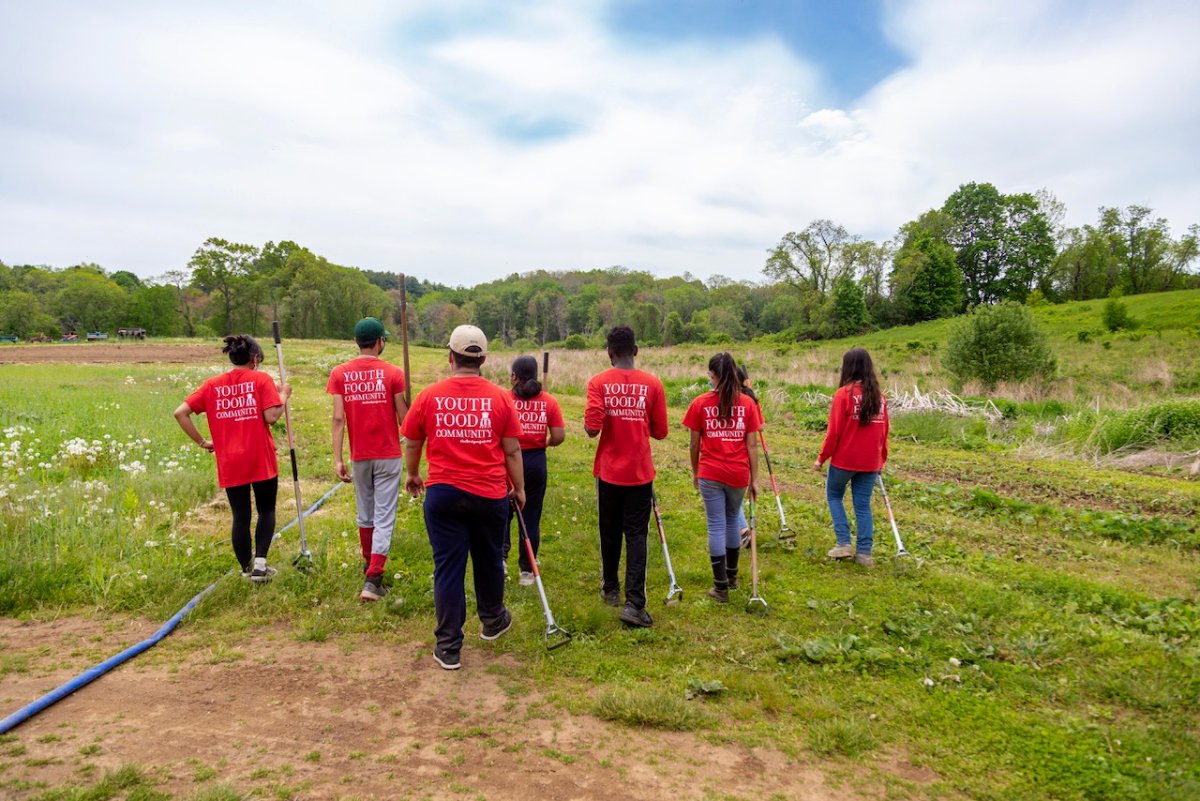 Young farmers in the field at Reynold’s Farm in Wenham. The Food Project’s mission is to empower young people to grow and distribute fresh, healthy, affordable food to members of their communities. (Photo credit: The Food Project)

Despite the summer’s extremely difficult growing season—marked by severe drought and unrelenting heat—the farm increased its production capacity and is still on track to grow its overall production 75 percent by 2025, they said. The farm grew enough produce to sustain its CSA shares and farmers markets while increasing its donations to hunger relief organizations.

The electric tractor will help the farm manage invasive weeds that pull water away from crops and block sunlight with their broad tall leaves, and also contribute to the organization’s long-term goal of building a sustainable farm system by reducing the amount of fossil fuels burned.

Both Eastie and Full Well farms struggled to find other farms in New England powering their greenhouses with renewable energy. Tupper-Palches found one farm in New Hampshire with a climate battery system and a grower-engineer in Pennsylvania who designs the systems through Atmos Greenhouse Systems.

Thiruvengadam found a geothermal-powered greenhouse at a Pennsylvania university, and said he had to “crowdsource” the information on building the system in such a tight urban spot, piecing together information from different organizations in a process he likens to quilting. 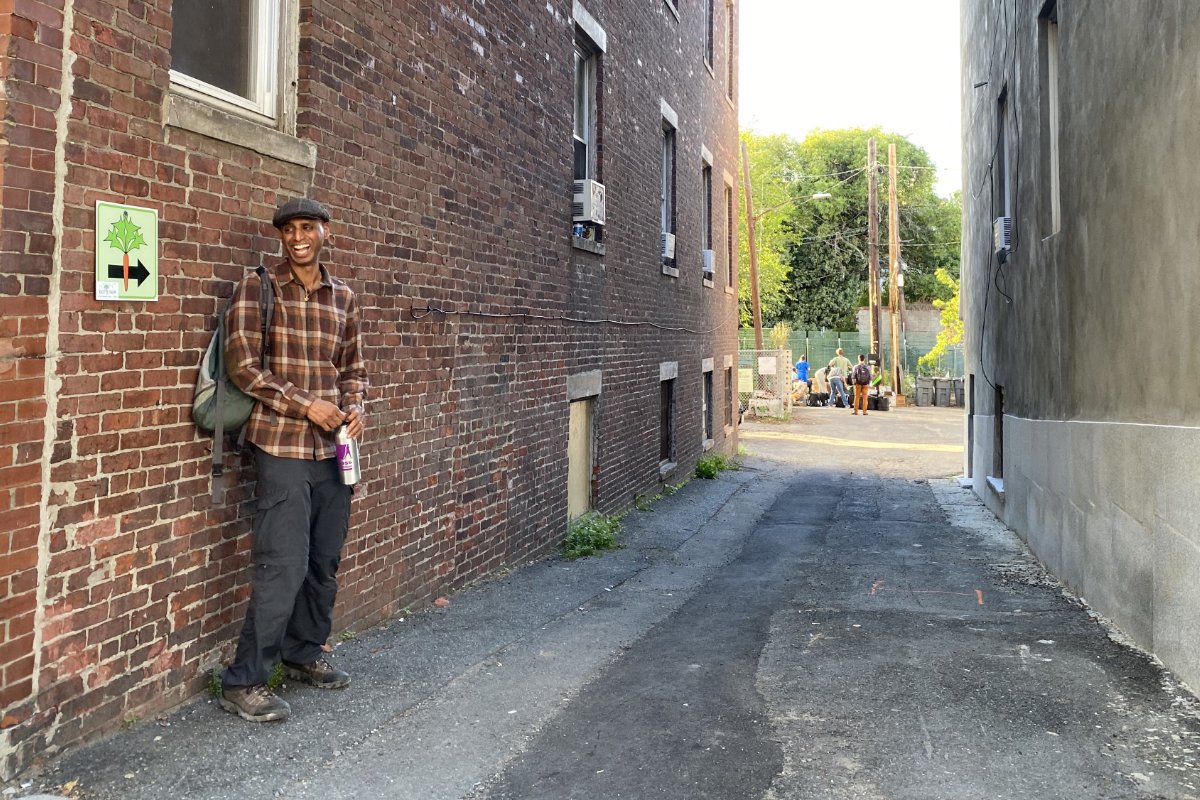 Now both farms are deluged with calls from other growers or organizations who want to learn how to create a geothermal-powered greenhouse. “There’s definitely a lot of buzz about this kind of technology,” said Tupper-Palches, adding that a group of middle-school students recently visited the farm, some from as far away as California.

Many Massachusetts farms are looking at those technologies, Randle agreed. The grant program expects another $25 million round of funding, she added.

Boston-area farms are also taking note. “It’s a beautiful structure,” said Danielle Andrews, who manages The Food Project’s greenhouse in Boston, which relies on natural-gas during the winter months. “Kannan is a leader in climate resiliency in the city of Boston, so to see them bringing this technology online, and being able to learn from it, is really exciting.”

This article has been updated to correct the spelling of Sebastian Tabares’ name and tanamá varas’ pronouns.