Students Are Building the Next Generation of Farmworker Advocates | Civil Eats

Students Are Building the Next Generation of Farmworker Advocates 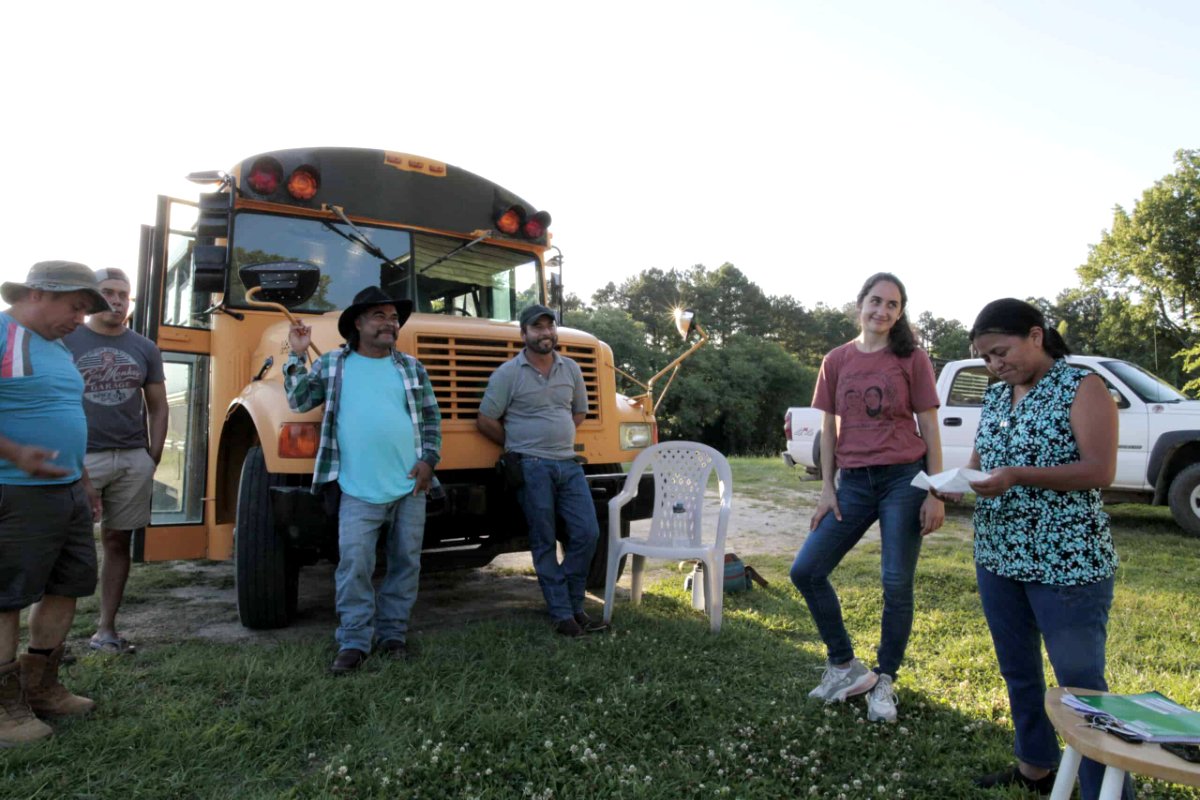 An excerpt of this article originally appeared in The Deep Dish, our members-only email newsletter. Become a member today to get the next issue in your inbox.

As the sun dipped in the sky in late July, a group of students and migrant farmworkers gathered just outside a farmworker labor camp in Sanford, North Carolina. The students quickly began chatting and laughing with the workers, who they visited earlier to perform a play they wrote called “Dichos del Campo” (Sayings From the Fields) that riffs off the popular Mexican soap opera “Como Dice el Dicho” (As the Saying Goes).

The play covers some of the most pressing health topics facing migrant farmworkers in North Carolina: extreme heat, the ongoing COVID-19 pandemic, acute nicotine poisoning (known as green tobacco sickness), and the isolation and mental health impacts of living in rural migrant camps. They’ve returned a month later to play games that spark discussions on these same topics, with platters of beans, rice, and tamales to share.

These students have performed the play, relying on a few props and a lot of improvisation, across farmworker labor camps in North Carolina, as a part of the Student Action with Farmworkers’ (SAF) Into the Field summer internship program. Every year, around 25 students—many of whom are from farmworker families themselves—participate in SAF’s program, working at a range of advocacy organizations, while producing documentaries and performing plays. The program unofficially began in 1976, with a group of Duke University students that was investigating migrant camps, and it has continued to bring young farmworker advocates into the fields ever since.

Civil Eats spoke with Yadira Paz-Martinez, a 19-year-old Duke student and recent participant, about what she learned about effective farmworker advocacy from SAF.

What prompted you to apply to SAF’s Into the Field program?

I’m originally from Sampson County, North Carolina, and a lot of my family are farmworkers. Before coming to Duke, my life revolved around this world—a rural community closely connected to farmworkers—and I utilized my summers to work in the fields. After I started attending Duke, I shifted away from that community. So, I wanted to figure out a way to reconnect, and I looked for programs that focused on engaging student advocacy within farmworker communities.

How has this work shaped your advocacy?

When I was younger, I remember hearing the contractors and bossmen yell at other workers, disrespecting them, and treating people as if they were only assets for profit instead of humans. I never understood why farmworkers were treated in such inhumane ways. Not only did I grow up seeing how these farmworker families do not receive the income they deserve doing the kind of work they do—but on top of that, their human rights are stripped away. These experiences really made me want to ensure that farmworker families have the income and the human rights they deserve.

What has been the most meaningful part of the program for you?

There were so many meaningful moments. In the program, there is this theater component. When I first got accepted into the program, I was like, “I don’t understand how this is going to be effective.” At Duke, you learn the importance of quantifying work, statistics, and change. But theater is nothing like that [and yet it was] just as valuable as any data point. Just sitting there and communicating about their lives, their history, learning their stories—that was all so valuable, not only as nonprofit workers but as humans, really being able to connect with one another.

Could you talk more about the issues described in the play–isolation, heat illness, green tobacco sickness, and COVID–and how they affect farmworkers in North Carolina?

Something I’ve been heavily interested in is how climate change contributes to a lot of these issues. Heat is increasing, especially during the times that farmworkers work. [We’re] hearing stories of farmworkers that have passed away being in fields because of the intense heat. Whenever we are actually out in the fields, doing theater night or outreach, farmworkers will tell us about their stories of green tobacco sickness. [After] working in tobacco [fields], the next day they feel awful, sick; they have to be in bed. A lot of these farmworkers don’t have health insurance or healthcare accessibility. And this all ties in with COVID. The probability of encountering COVID-19 was high [for farmworkers]. They were in confined spaces working with one another. This contributes to the isolation. They have no connection with the community surrounding them. For a lot of these farmworkers, the closest thing they have to interacting with other people is Walmart. These injustices are all intertwined.

Are there any changes you’d like to see at the policy level to help address any of the issues you’ve been working directly on?

There are a lot of [policies] that enable all these injustices to continue. One of the biggest issues that I saw, at least working with the North Carolina Justice Center and SAF, is that a lot of growers and contractors get away with injustices, despite there being laws that protect farmworkers. Of course, these laws only protect to a certain extent. They don’t protect in a profound way.

What else have you learned about how to be an effective farmworker advocate?

A lot of people confuse “working for” and “working with.” You come into these communities and your mindset is, “Okay, I’m going to work for them.” But a lot of it is working with them. You need to be able to build relationships and trust with farmworkers. SAF cannot create the change they want to make by themselves. It really taught me the importance of building relationships and how actually going out there—hearing them out, hearing their demands, seeing what they need and want—is so crucial.