“She wanted to be a part of history,” said her son, Dennis Hutson, who was in his mid-20s at the time.

The town had a distinctive past. It was founded in 1908 by Allen Allensworth, a man born into slavery who became the first African American to reach the rank of lieutenant colonel in the U.S. Army. About 3 square miles in size, Allensworth was the first town in California founded and governed by Black people—and it served as a beacon of possibility for Black people all over the nation, its population growing to around 1,200 people.

“The company that sold the land to Col. Allensworth didn’t fulfill its promise to build an adequate water system, leaving the growing population with debt and dry wells.”

But the community soon fell on hard times.

In 1914, the Santa Fe Railroad Company moved its rail stop from Allensworth to nearby Alpaugh, a majority-White town, dealing a major blow to Allensworth’s economy. That same year, Col. Allensworth died after being struck by a motorcycle during a visit to Los Angeles.

It was access to water, however, that proved the most challenging.

According to California’s water regulatory agency, “The company that sold the land to Col. Allensworth,” the Pacific Farming Company, “didn’t fulfill its promise to build an adequate water system, leaving the growing population with debt and dry wells. Drought struck the Central Valley soon after the town was founded, which led to poor crop yields and further decreased vital water supplies.”

In 1966, the town suffered another blow when officials discovered arsenic in the drinking water. By the 1970s, Allensworth no longer appeared on most maps.

The town’s storied past and ongoing challenges were what drew Morrison there, Hutson said of his mother. She dedicated the rest of her life, until her death in 2018, to Allensworth, where she joined church efforts and nonprofit campaigns against local polluters and rallied to secure clean drinking water for the community. On weekends, her five grown children joined her in her efforts. 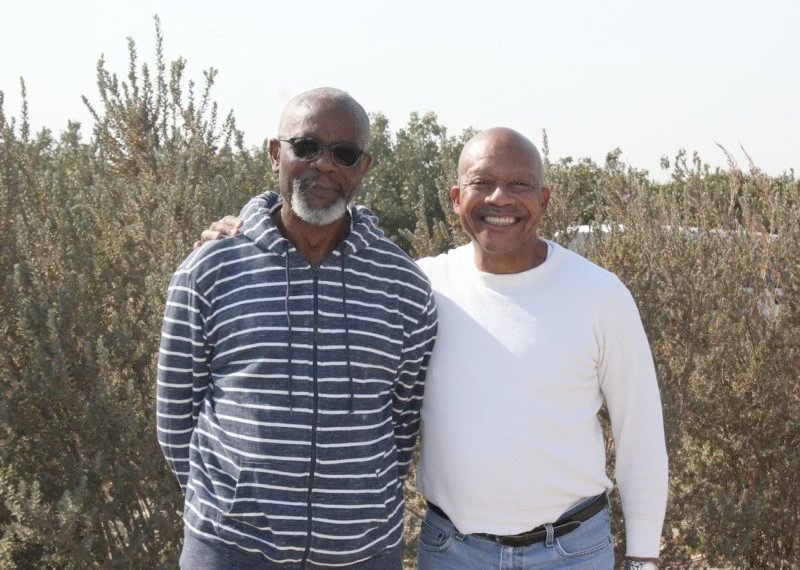 Decades later, two of her children—twins Dennis Hutson and Denise Kadara, then in their 50s—felt a similar calling to Allensworth. Hutson, a Methodist preacher and Air Force chaplain living in Las Vegas at the time, remembered his frustration that little seemed to have improved for local residents despite his mother’s many efforts. As recently as 2020, nearly one-third of the population still lived below the poverty line.

So in 2007, Hutson, Kadara, and Kadara’s husband, Kayode Kadara, decided to buy 60 acres from a retiring farmer in Allensworth, calling it the TAC Farm (TAC originally stood for The Allensworth Corporation, an entity that has since been dissolved). Kadara moved to Allensworth from Half Moon Bay in 2010.

Their goal was to create a Black-owned, Black-operated farm that would honor Allensworth’s legacy and boost the local economy in the Valley. They began to farm a mix of collards, okra, mustard greens, watermelon, and black-eyed peas, because, as Hutson said, “I’m going to grow food that I know Black people want to eat.”

The Central Valley is sometimes called the nation’s breadbasket, producing about 8 percent of total agricultural output and nearly 40 percent of the country’s fruits and nuts. But climate change poses a serious threat to the region’s farms. Annual average maximum temperatures in Allensworth, and the surrounding San Joaquin Valley, which is part of the Central Valley, increased by 1 degree Fahrenheit from 1950 to 2020. That figure is projected to increase another 4 or 5 degrees in the next 30 years, according to a state-commissioned report released earlier this year. The region is also experiencing its most severe drought in a millennium, according to a separate study published earlier this year in the journal Nature.

The extreme heat and drought don’t just threaten crops. These conditions make farm work more dangerous for workers and pose critical health risks for surrounding communities, according to Chantelise Pells, a water-systems researcher at the University of California, Merced, and the co-author of the state-commissioned report.

“When you compound the expenses of air conditioning, poor air quality, and limited access to water, [the climate crisis] is a huge economic burden for low-income communities,” Pells said. “They have to make a choice of whether to suffer in the heat or not have enough money to meet their basic needs.”

“When you are in the midst of a drought in a state that is having severe water challenges, it seems to me that you would rethink how you do your farming.”

According to the same report, hundreds of thousands of residents in the San Joaquin Valley—many of whom are farmworkers—do not have access to clean drinking water and instead rely on store-bought bottled water. More frequent heat waves, which are often accompanied by poor air quality, increase the economic burden on low-income communities in the region that already experience disproportionate rates of asthma and heat-related illnesses.

Lack of rainfall and snowmelt runoff also means farmers rely more heavily on groundwater, a practice that has become unsustainable, experts say. And amid the water scarcity, small-scale farmers like the Hutson-Kadaras are struggling to compete with larger farms.

“Most small-scale farmers don’t have the means to dig deeper wells and compete with large farms for access to groundwater,” said Angel Santiago Fernandez-Bou, a researcher at the University of California, Merced, and another co-author of the state-commissioned report. “During a drought, this can be a big problem for small or disadvantaged farmers.”

In 2007, for example, Hutson dug a 720-foot well on his family’s property, only to discover that his neighbors, who operate larger-scale operations, have wells thousands of feet deep. He realized that meant his well—and the farm’s lifeline—would be at risk of drying up long before his well-financed neighbors’ water sources would. (Around 42 percent of public wells in the San Joaquin Valley are at risk of drying up due to current drought conditions, according to the state-commissioned report.)

“When you are in the midst of a drought in a state that is having severe water challenges, it seems to me that you would rethink how you do your farming,” Hutson said. “That it would encourage you to consider other ways to provide for your livestock [while] at the same time trying to provide for your environment.”

In 2011, the Hutson-Kadaras participated in an organic farming training program, where they learned adaptive practices, such as enriching their soil with organic compost and installing windbreaks—hedges of trees to protect crops against wind—that would limit their reliance on synthetic fertilizers, reduce soil erosion, and conserve water.

In the past decade, the TAC Farm has adopted other climate-friendly practices, including closed-loop agriculture—a technique in which farmers recycle nutrients and organic matter back to the soil. The Hutson-Kadaras also raise rabbits, feeding them organic alfalfa and using their nutrient-dense manure as fertilizer.

Hedgerows and windbreaks reduce soil erosion, minimizing soil disturbance, which in turn leads to less dust and fewer pollutants in the air. Healthy soil increases water retention, leaving more water in the aquifers. The cover crops add fertility to the soil, reducing the need for agrochemicals that pollute the air and water. The benefits of these farming practices, if adopted widely, reverberate throughout the surrounding community, according to Pells.

“Using regenerative practices [like cover cropping and reducing tillage] is a win-win,” Pells said. “It improves water and air quality, while lessening the economic burden on the farmers themselves.”

Their experiences over the past 15 years have convinced the Hutson-Kadaras of the importance of small-scale and cooperative farming. The benefits aren’t just environmental, Hutson said. Surrounding communities have been shown to benefit economically as small farms generate jobs and circulate income among local establishments.

Drought and extreme heat notwithstanding, Hutson said his dream—to make Allensworth once again a beacon of hope for Americans of color—is slowly becoming a reality.

State officials are now looking to the Hutson-Kadaras’ farm as a model for developing a new generation of small-scale, sustainable farmers. Earlier this summer, state lawmakers earmarked $10 million in funding to help Hutson and Kadara develop a farmer-training program that focuses on sustainable practices and cooperative methods that can help fight the tides of climate change and transform the Central Valley into a more economically and environmentally sustainable region.

The program will primarily recruit burgeoning Black farmers, Indigenous farmers, and other farmers of color in an effort to close some of the racial disparities that are rampant in food and agriculture. After seven months of training, participants can lease a small plot of land on the Hutson-Kadara’s farm for the next 2½ years and sell their goods to local cooperatives. (While land access has been, and continues to be, an issue for many beginner farmers, organizations like Minnow exist to facilitate the transfer of land into the hands of California’s farmers of color while advancing Indigenous sovereignty.)

Drought and extreme heat notwithstanding, Hutson said his dream—to make Allensworth once again a beacon of hope for Americans of color—is slowly becoming a reality. In June 2022, California Gov. Gavin Newsom set aside an additional $32 million dollars in the state budget for Allensworth—a majority of which will go to building a new visitor center that will connect the town’s history of Black self-determination with its future as a sustainable and equitable farming hub.

“I want Allensworth to be known for training and producing the next generations of cooperative, small-scale, sustainable farmers—whether they are Black, Latinx, Indigenous, or Asian,” Hutson said. “That’s what I hope for, and that’s what we are working toward.”

This article appeared in Nexus Media News with editing help from YES! Magazine and was made possible by a grant from the Open Society Foundations. Nexus Media News is an editorially independent, nonprofit news service covering climate change.