Agrihoods Promise Fresh Food and Community. Can They Add Equity to the List? | Civil Eats

Agrihoods promise to save farmland by turning it into a residential amenity. Can this effort to bridge housing and farmland support environmental justice?

Like many agrihoods, the Santa Clara Agrihood bills itself as a “sustainable community.” The master-planned neighborhood centered around a farm, which is slated to be completed in 2024, will include modern townhomes and apartments with sharp, geometric angles and large balconies, overlooking a fruit orchard and an organic farm enclosed by native hedgerows. There will be a cafe, plenty of outdoor seating, and vines crawling up carefully placed trellises.

But unlike many agrihoods, the community isn’t just designed for sustainability. It’s also designed for an aging, disabled population that often struggles to find housing in the Silicon Valley, where the average home costs more than a million dollars. Of the agrihood’s 361 homes, 165 will be for low-income seniors and veterans and 16 for working families. The farm was designed with this population in mind, including wide pathways and garden beds raised on stilts, so residents can garden in their wheelchairs.

“Everyone in America was at one time either a farmer themselves or their neighbors were the farmers. Then we separated farm production from farm consumption, and nobody knew where their food came from.”

Lara Hermanson, the co-founder of Farmscape, the company that will manage the farm, notes that residents with mobility issues are still able to do tasks like bundling herbs or seeding trays. “It’s providing meaningful work at all ages and ability levels,” she added. The crops will be adapted to the climate and the cultures of the residents, drawing from Santa Clara’s immigrant senior population.

The Santa Clara development will be the latest in a growing number of agrihoods that function not just as a site of food production but also a source of community building. Ed McMahon, a senior fellow of sustainable development at the Urban Land Institute, a network of cross-disciplinary real estate and land use experts across the world, estimates that there are more than 200 agrihoods across the United States, spanning at least 30 states, from rural communities to major cities. And it’s easy to see why. As McMahon put it, “walkable, charming neighborhoods—that’s a scarce resource.” Beyond that, agrihoods also harken back to an earlier way of living.

“Everyone in America was at one time either a farmer themselves or their neighbors were the farmers. Then we separated farm production from farm consumption, and nobody knew where their food came from,” said McMahon. “This is a way to restore that balance, at least to a small extent.”

As a model, agrihoods have the potential to address fundamental food system challenges, such as food miles and possible supply chain disruptions. “In principle, it makes sense to more strategically integrate agricultural production into wherever we live,” said Joshua Sbicca, associate professor of sociology at Colorado State University and author of A Recipe for Gentrification. “It makes sense to have greater connection to the land and makes sense to have more immediate access to food, which is a fundamental need.”

Yet Sbicca cautions that agrihoods could also cause harm by being poorly integrated into an existing neighborhood, or even displacing residents. A question he tends to ask when evaluating “green gentrification” is: Who ultimately benefits?

So far, the answer to Sbicca’s question is the well-heeled. The term “agrihood” was popularized by 2014 New York Times article about a popular development in Arizona called Agritopia. The article noted at the time that homes in the community sold for “no more than similar houses in the area.” But since then, they have risen to a median price of over a million dollars, while homes in the surrounding community go for about half that price. Other agrihoods are similarly pricey, often treating the farm as an “amenity” that adds to its marketability and cost. 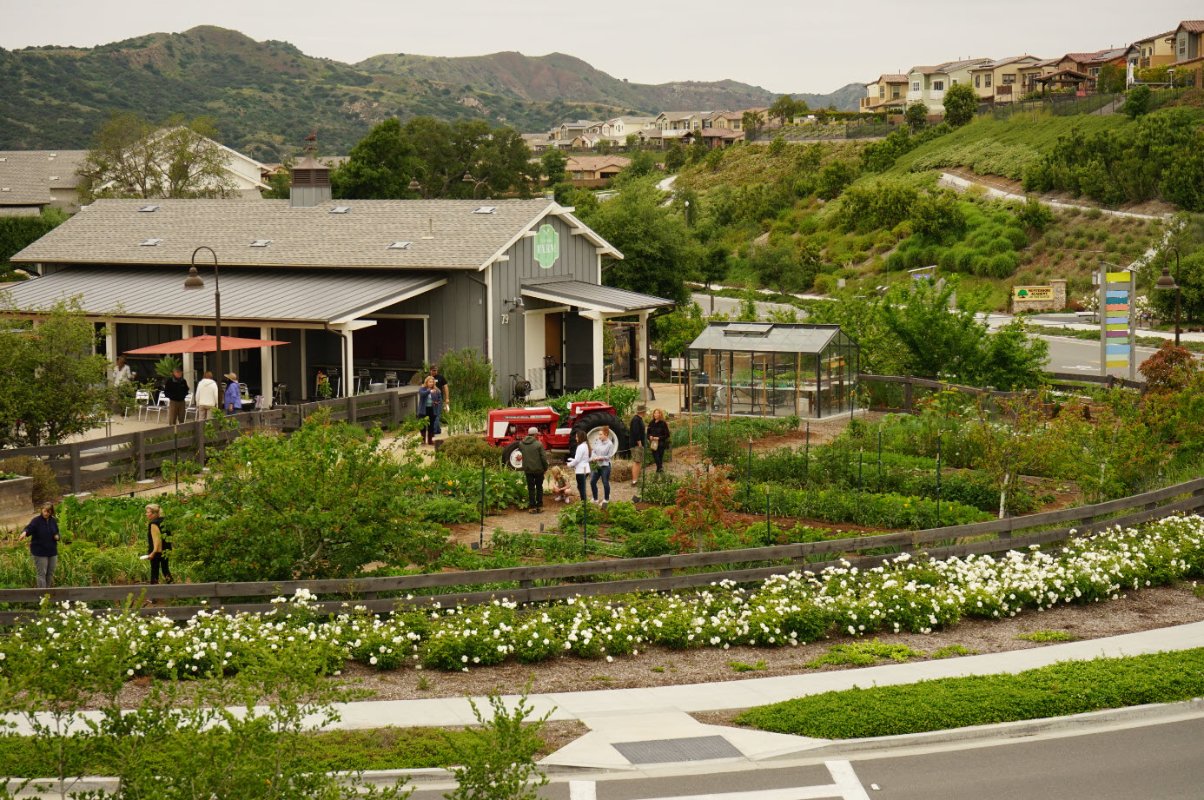 “Instead of building golf courses and tennis courts . . . they decided, ‘Let’s get connected to a farm and make that the feature for young professionals,”’ said Alrie Middlebrook, the president of the California Native Garden Foundation, which helped design the Santa Clara Agrihood’s landscape.

Funded in part by an affordable housing bond, the Santa Clara project represents an effort to break from the mold and make the agrihood model more accessible. It is designed to benefit the broader community, too. Those involved plan to host regenerative agriculture workshops and offer volunteer opportunities for the public, while the food will be sold at a farm stand using the honor system, like many rural farm stands. In this case, customers will pay with a QR code, or by drop box. Middlebrook hopes to create a model for similar communities.

“We can maximize stability in local communities by having them manage their own food,” said Middlebrook. “I see it as a way to not only deal with the climate crisis, but with a lot of other crises that are happening in America today.”

Other new agrihoods have also been making an effort to build environmental justice into their model. In Wisconsin, for instance, the grassroots group Save the Farm has been pushing to turn 65 acres of farmland into “a radically inclusive community that creates housing, food, and economic security for all.” They originally sought to buy the land but a developer has put in an offer that remains pending, according to Colleen Robinson of Save the Farm. So far, however, the developer has been receptive to the group’s vision.

“Building a community with economic and ethnic diversity has been tough. We’ve made progress, but we could do better.”

“We’re hopeful that they see us as a very strong asset and a partner,” said Robinson. “This could really be a national model of developers working with the community towards something sustainable and affordable.”

As agrihoods take on more forms, Benjamin Breger, a municipal planner who has researched agrihoods, sees the need for a clearer definition of the term. “The best thing would be a certification,” he said. “So, people aren’t duped into moving to an agrihood and land-use planners aren’t supporting this idea and not really getting the benefits out of it.”

He points to how this definition could include permanently protected land and a way to include more middle- and low-income residents.

Many of the earliest agrihoods, such as Prairie Crossing in Illinois, emerged as a compromise between housing developers and agricultural conservationists.

In the 1970s, a major developer announced plans to tear up 677 acres of tiled soy and corn fields to build 2,000 houses. After a lengthy court battle, conservationists purchased the land in a bid to restore its original swales, tall grass prairies, and wetlands. They placed 180 acres under a conservation easement. Midwestern-style housing is nestled throughout about 135 acres, nearby an organic farm.

Developed before the term agrihood was popularized, the founders generally refer to it as a “conservation community.” And it’s an example of just how successful this style of development can be at conserving farmland, habitats, and wildlife. Earlier this month, a resident encountered a bobolink—one of the migratory birds that travels the farthest—perched in a hayfield late in the season, considering nesting.  They’ve built a community that trusts each other to conduct prescribed burns, periodically setting fire to the prairie to encourage native grasses. 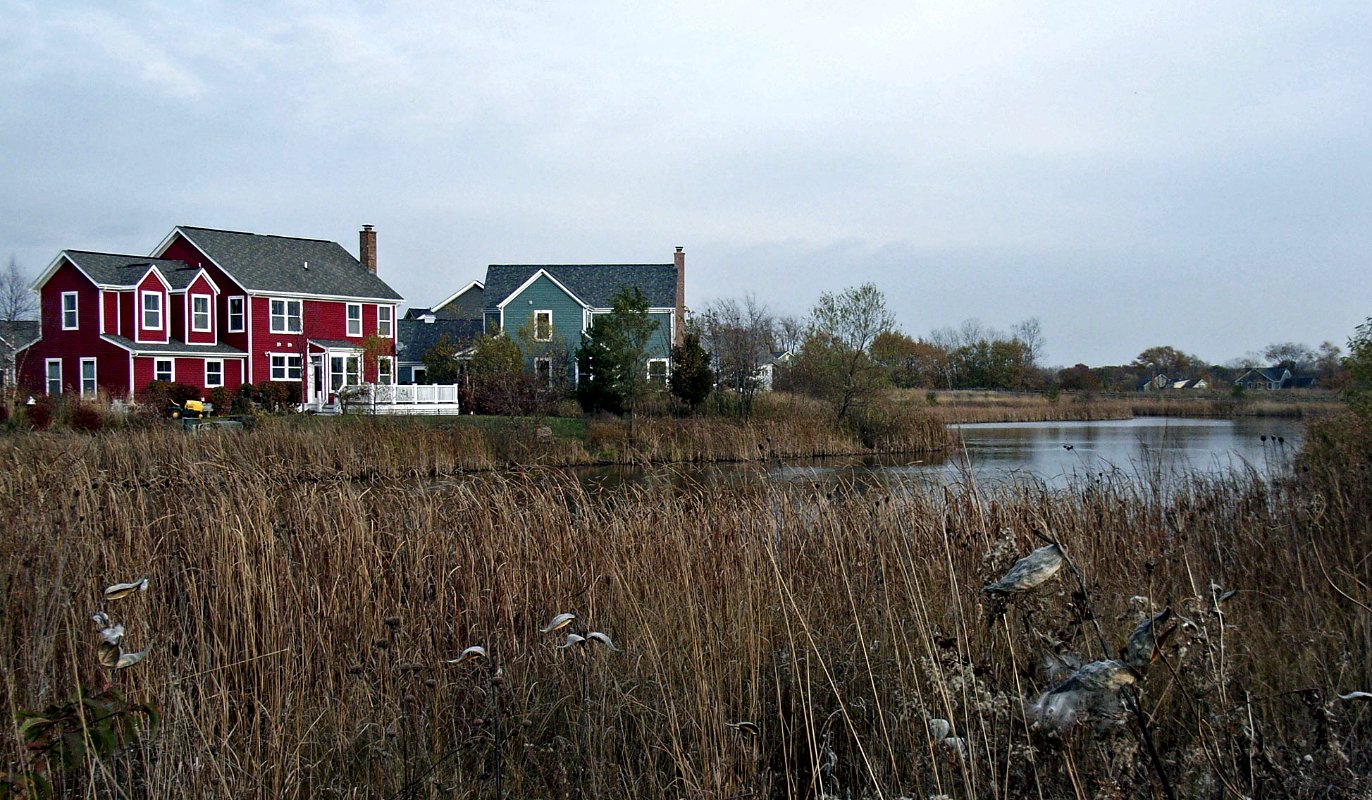 Wetlands and housing at Prairie Crossing in Illinois. (Photo CC-licensed by Payton Chung)

But while it’s a hotbed of biodiversity and a land preservation success story, Prairie Crossing is still mostly home to middle- and high-income white people (the median home cost is $400,000, according to realtor.com). “Building a community with economic and ethnic diversity has been tough. We’ve made progress, but we could do better,” the community’s website states. Karen Wilkes, the president of the Liberty Prairie Foundation, which owns the farm and receives some funding from the sale of resident homes, hopes to see this done through community partnerships. But it’s unclear whether that will be enough.