Free, high-quality produce donations are so rare in Tahlequah, Oklahoma that Stacy Serrano, vice president of the Rural Community Initiative Foundation (RCIF), thought it was too good to be true when she first received a call offering a free truckload of fresh fruits and vegetables from the California-based advocacy group Vegan Outreach. “Honestly, I thought he was fibbing,” laughs Serrano.

Yuri Mitzkewich, the Vegan Outreach program leader who made the call, was shocked when he visited Tahlequah, home to the largest number of native Cherokee speakers in the country. Fresh food was hard to find, and dollar stores were the only places to buy groceries for miles around.

The costs of transporting fresh fruits and vegetables into the region are high, Mitzkewich says. A combination of inflationary price spikes for fresh produce and a pandemic-driven shortage of transport options have made prices even steeper.

Since 2020, Cherokee Nation residents have been able to access produce at two Talequah community centers that receive fruits and vegetables from Vegan Outreach and its partner, Food Forward, a Los Angeles-based nonprofit that aggregates pallets and truckloads of surplus produce from growers and shippers in Southern California that might otherwise go to waste.

“Food Forward helped us get nutritious, fresh whole foods to these communities that would rarely be able to access it to begin with,” says Mitzkewich. “They’d be priced out of it, even if they were able to get some.”

Based in the region that receives and ships the most food in the U.S., Food Forward has built an extensive recovery network that enables it to support food distribution partners on a local and a nationwide scale. Founded in 2009, Food Forward reached a milestone in June of 250 million pounds, or 1 billion servings, of fresh produce recovered and donated to food insecure communities.

That achievement is both a sign of how the organization has mastered the flow of produce distribution in Southern California and the degree to which the pandemic has intensified needs among communities that were already facing dire food insecurity. 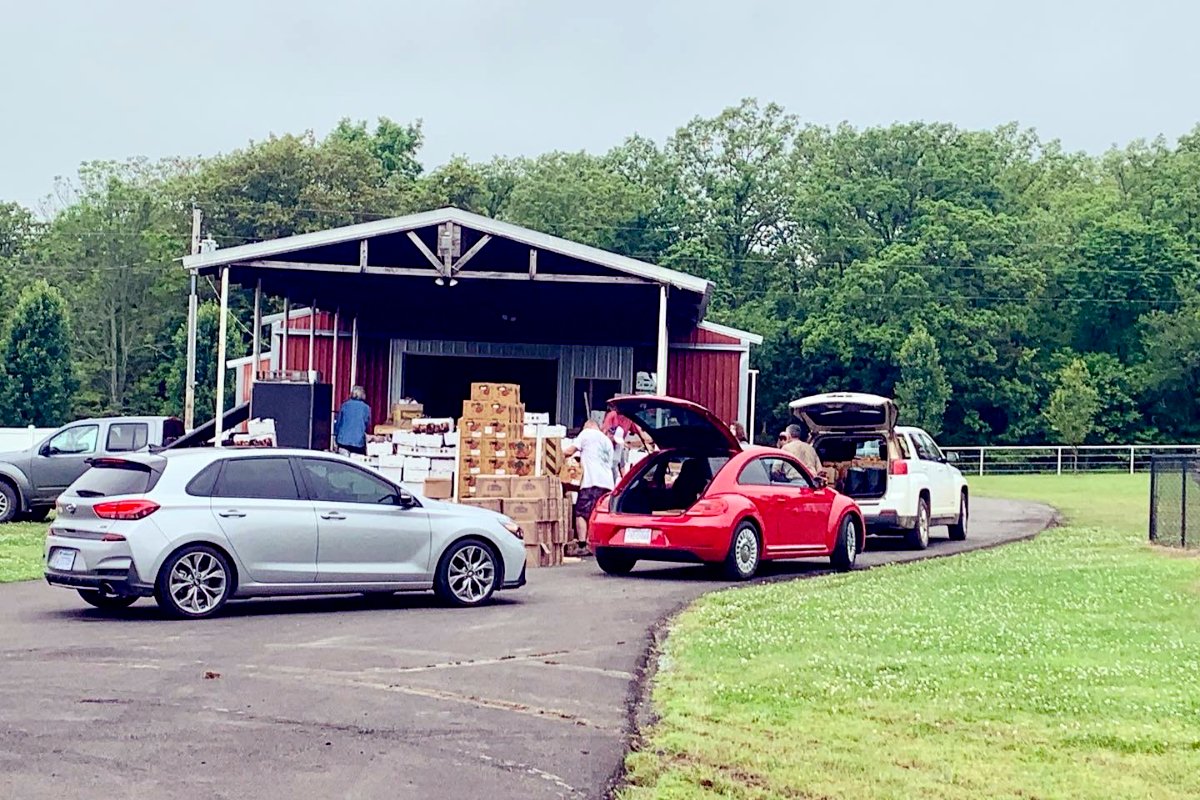 “We’re all kind of under this umbrella, feeling like the last 10 years for Food Forward were a dress rehearsal for the pandemic,” says CEO Rick Nahmias. “[Now], we’ve got kind of an internal feeling of growing into the suit of clothes that we needed to put on for the pandemic.”

Food Forward focuses on recovering fresh produce, the bulk of which it collects from a wholesale recovery program. After collection, the organization stores the fruits and vegetables at its refrigerated Produce Pit Stop in southeastern L.A. before transporting it to hunger relief programs that distribute the food to low access communities. It has worked with more than 350 direct partners to coordinate food donations to 12 California counties, six other states, and two Tribal nations.

The needs in food-insecure communities intensified in lockstep with the early days of pandemic, fueled by rising unemployment and supply chain disruptions. In 2020, 15 percent of households were food insecure, up from 11 percent before the pandemic. That put pressure on food recovery organizations like Food Forward to act quickly. Nahmias believes that being “nimble and reactive” was already inherent to their ability to quickly move perishable food that is neither frozen nor shelf-stable.

“We understood workflows well enough, we understood efficiencies, we understood the network and how food flows through the L.A. area, the contiguous county, and the region,” Nahmias says. “We saw we were at a point of really being able to make an impact that, if we didn’t step up to, I don’t know that we really could have legitimized staying around afterwards.”

That knowledge proved crucial. Christine Tran, executive director of the Los Angeles Food Policy Council, remembers constant mismatches between the food consumers could buy and the traditional routes of food supply. Growers, restaurants, and other food suppliers ended up with surpluses that were no longer wanted at their original destinations.

“One thing to think about when we consider food production is there are primary uses, secondary uses, and beyond,” Tran says. “When we think about food, the process from point A to point B doesn’t always happen in the way we anticipate.” Organizations like Food Forward turn these situations into opportunities to redirect food toward people who need it, she says. 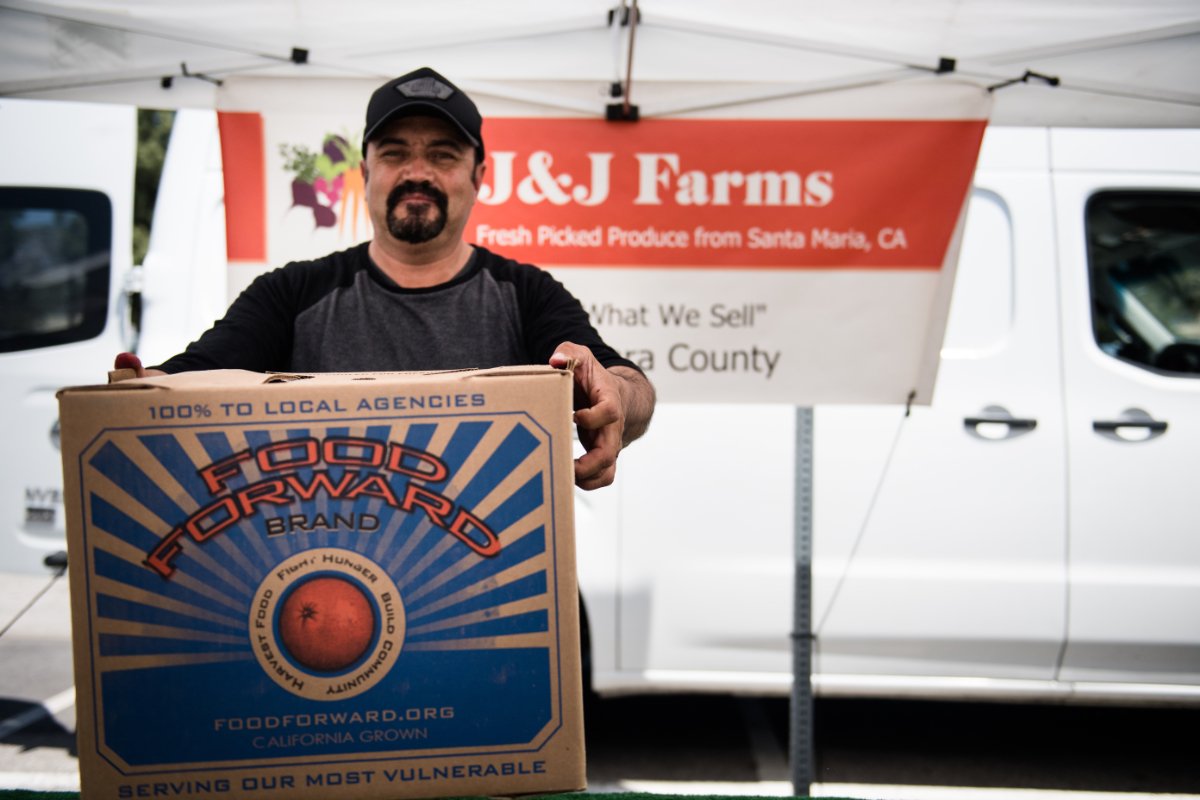 As multiple stakeholders, including the government, determined how to triage food access needs, it became clear that low-income communities of color that were already experiencing food insecurity were disproportionately affected by pandemic disruptions. A lack of grocery stores and a prevalence of fast-food restaurants have been well documented in Black and Latinx communities. The pandemic also highlighted food insecurity patterns in Asian American and Pacific Islander and Indigenous communities.

“Coming out of the pandemic, one of the things that got exposed along racial lines is a disparity of who has access to healthy fresh produce on a consistent basis,” says Nahmias. “It’s become even more undeniable and compelling in a way that we need to act on it.”

As part of its pandemic-driven acceleration, Food Forward expanded its reach to Indigenous communities through its partnership with Vegan Outreach. When the pandemic hit, Vegan Outreach started a food aid program to fund deliveries of nutritious, plant-based food to low-income communities of color. One of Mitzkewich’s coworkers, Victor Flores, heard about Food Forward and contacted the organization to facilitate produce deliveries to areas within the Cherokee and Navajo Nations.

That marked the beginning of a two-year relationship that has supported at least 10,000 people in RCIF’s community, according to Serrano.

The deliveries from Southern California to Northeastern Oklahoma require substantial coordination. Vegan Outreach waits for word from Food Forward that both the produce and a truck are available. Once confirmed, Vegan Outreach sponsors the cost of the truck and notifies RCIF to verify that it has capacity for the donations. Two to three days later, the truck arrives. Serrano and her team unload 250 to 300 boxes of produce to distribute through pick-up days and drop-offs for elders or those without cars. Any excess produce is given to nearby homeless shelters or is pickled and canned. The deliveries take place once or twice per month, depending on how much produce Food Forward can access at a given time.

“It was really the illustration of the phrase, ‘Keeping you on your toes,’” says Mitzkewich. 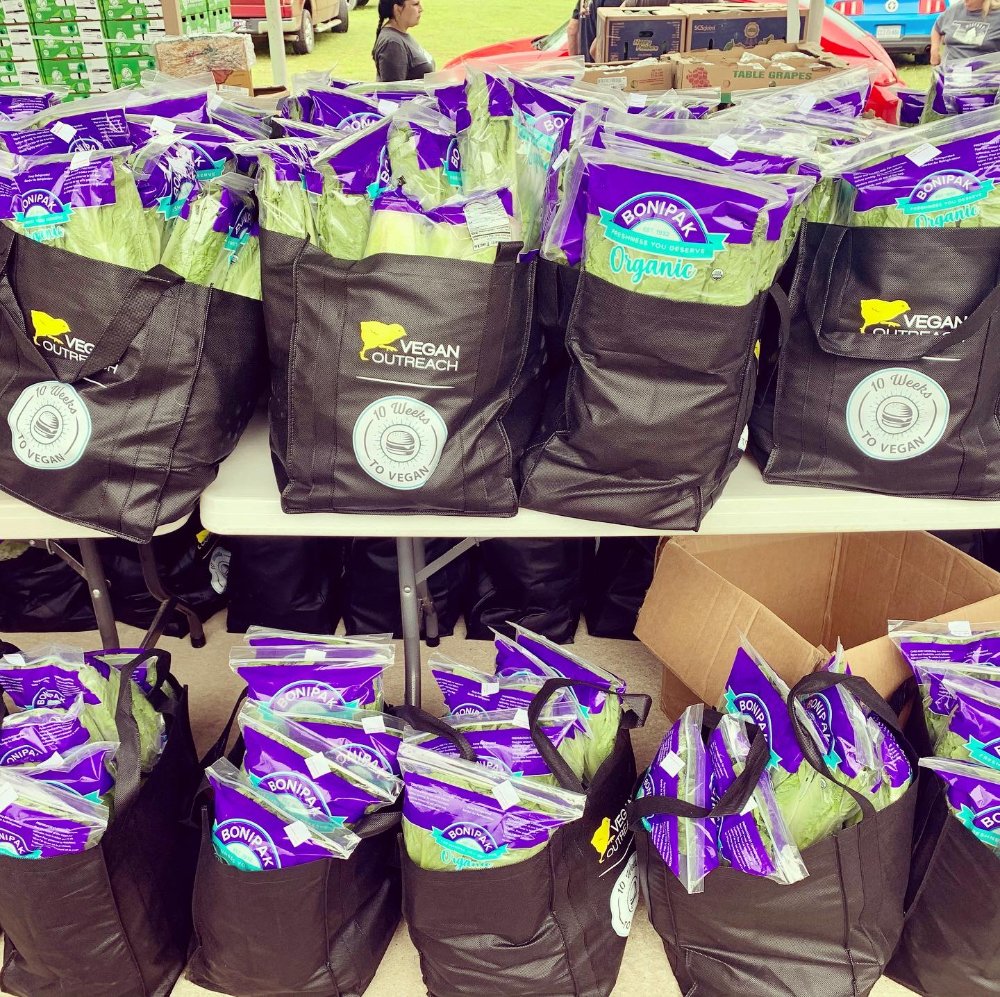 Despite the temporary chaos, Serrano says that thinking about the fresh produce provided to RCIF recipients brings her to tears. Mitzkewich still cherishes numerous thank-you notes from those who received the donations through the Tahlequah community centers.

Before the Food Forward donations, the only comparable scale of food deliveries to RCIF were boxes from the USDA’s Farmers to Family program, a Trump Administration effort to address rising hunger.

But the USDA boxes didn’t reliably provide nutritious food, and the program was rife with other problems; it ended in May 2021. Each box included a mandated source of protein, dairy, and produce. RCIF often received boxes with hot dogs, milk, or yogurt, and apples, oranges, or tomatoes. “If you’re hungry, you’re certainly going to eat it, but everybody got tired of eating hot dogs,” Serrano says.

Food Forward had a similar experience when it briefly helped distribute the government boxes in Los Angeles County. While they started out nutritionally balanced, the quality and variety went downhill after the program hit the three-month mark.

“We stepped away from it because we couldn’t stand behind the quality of the food that was being put out there. And as much of an emergency as it was, it kind of reached that tipping point of, ‘Maybe we’re doing more harm than good here,’” says Nahmias.

Tran sees the lack of community involvement and consideration in many government procurement practices as part of a larger pattern in how systemic food insecurity is treated. “Oftentimes, unfortunately, our communities see themselves as an afterthought in the supply chain, which is sad because when you think about the last mile of food for low-income communities, they should be the priority and not an afterthought, right?” Tran says.

The shortcomings of the USDA boxes speak directly to the gap that Food Forward fills and provides some insight into what’s next on the agenda for food rescue organizations: doubling down on fresh produce and moving away from a reactive mindset. Nahmias says his organization is not looking to grow this year but will instead focus on the 250-million-pound milestone as an opportunity to “level up everything.”

Having had to move fast in a time of crisis, many hunger relief organizations are now feeling the need to focus on consistency and firm up processes that were created very quickly out of need. Tran and Nahmias hope that community-based infrastructure and engagement can be prioritized to make their work easier.

Now that the initial stage of the pandemic is over, Food Forward has reached a phase “where we are managing [the need], instead of totally reactive to it,” Nahmias says. The organization has hit a point “where we can get consistent high-grade deliveries of produce to these communities that we really dug in with during the last two and a half years.”

This article has been updated to credit Victor Flores for helping to start the food deliveries to the Cherokee and Navajo Nations.

Lindsey Margaret Allen is the founder of Elemmay Productions, LLC and the Creative Producer and Host of POINT OF ORIGIN. Lindsey’s work is grounded in expanding awareness about supply chains as a means to help people make informed decisions about what they eat - in support of their own health as well as the health and well-being of our global communities and the environment. Read more >