Op-ed: Farmworkers Face Stress and Depression. The Pandemic Made It Worse. | Civil Eats

A new study underscores the multitude of stresses faced by farmworkers, including the ongoing impact of COVID-19, increasing heat and climate crises, as well as challenging working and living conditions.

It’s a very hard time to be a farmworker. Across the nation, these essential workers have faced increased risk of COVID-19 infection and mortality. In California, farmworkers have been among the most impacted—2021 research found that they were four times more likely to test positive than the general population.

Yet, while COVID and other health impacts—including increasing the dangers of heat stress as the climate crisis ramps up—have received national attention, the mental health challenges faced by agricultural workers are less visible. This is particularly problematic because even before the pandemic, agricultural workers nation-wide were vulnerable to very high stress levels, as well as higher than average rates of depression and anxiety. All of that is also linked to poor physical health, substance abuse, and high injury rates.

“Adding to the stresses for agricultural workers, temperatures often average well above 100 degrees during the summer and the air quality is some of the poorest in the state.”

According to our recent study, 40 percent of agricultural workers in Imperial County, a farming community along California’s southern border, experience high enough levels of stress to pose significant mental health risks. Imperial County is home to massive farms that produce more than half the nation’s winter vegetables, and many workers commute daily from Mexico to work in the fields. Despite the successes of the agricultural industry, Imperial County ranks highest in the state for income inequality, unemployment, and children living in poverty and has the highest proportion of non-white residents in California. There are well-documented housing shortages in the county and access to healthcare is limited. Adding to the stresses for agricultural workers, temperatures often average well above 100 degrees during the summer and the air quality is some of the poorest in the state.

As a joint effort between San Diego State University and the Imperial Valley Equity and Justice Coalition, our findings point to the intersections between workplace conditions, access to healthcare, and mental well-being among agricultural workers. We conducted 199 surveys and 12 interviews with Latinx agricultural workers who are employed in Imperial County and reside on both sides of the U.S.-Mexico border. We found similarly high levels of stress in both groups, despite the fact that workers who cross the border daily often start their commutes at 2am. Instead, we found that foreign-born and older agricultural workers were more likely to report elevated stress than their younger and U.S.-born co-workers. This means that regardless of residing on the Mexican or U.S. side of the border, those born outside the U.S. reported higher stress levels. 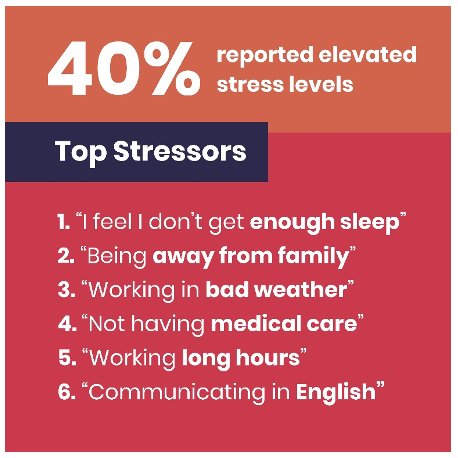 Many workers reported stresses endemic to agricultural labor, but other stressors may be directly connected to COVID. For example, workers reported high stress from English-language communication and lack of access to clean restrooms and medical care.

Language-related stress was often seen as a barrier to accessing COVID relief, testing, and vaccines; these often required not only English proficiency but also computer literacy. Lack of access to clean restrooms made hand washing difficult on the job. Meanwhile, lack of accessible medical care could mean the difference between life and death.

Essential to harvesting the nation’s food supply, agricultural workers in California have been targeted with an influx of federal, state, and local resources meant to mitigate the impact of COVID over the last two years. These included mobile testing sites, priority for vaccinations, eviction protections, health and sanitation guidelines and resources, and state-sponsored programs such as Governor Gavin Newsom’s Housing for the Harvest program and paid sick leave.

But it’s not clear that these programs helped reduce levels among farmworkers or improved their access to health resources. While many employers in Imperial County followed health and safety guidelines, several larger agricultural processing companies have been fined for negligence in protecting workers. The Housing for the Harvest program was marred with underutilization, and in Imperial County alone, $900,000 of available funding went unspent. Workers in our study were quick to mention poor bathroom quality and how hard it is to maintain a distance from co-workers in the field, in crowded housing, and while commuting to and from work.

In addition to the factors we’ve mentioned, inequity in the location of COVID testing and vaccine sites often leads many agricultural workers to seek health care in Mexico from more accessible and trusted—though pricier—sites. One agricultural worker we spoke to said, “Going to Mexicali was easier for me, since I don’t know how to read or write. They gave my test results to me in six hours.”

While government programs had mixed success, community-based approaches from trusted, local, Spanish-speaking organizations have been shown to be critical to connecting farmworkers with needed resources.

Workers told us that these organizations linked them with resources while also mitigating stressors having to do with work hours, literacy, and a lack of familiarity with U.S. healthcare services. For example, one local health center hosted Spanish-language, 2 a.m. vaccination clinics near the U.S.-Mexico border crossing. Those hours were accessible for agricultural workers who cross early in the morning to U.S.-based transit sites, but do not return from work until after the close of most other clinics. One agricultural worker praised these community-based approaches as, “always being attentive, always calling us, always being aware of when there are going to be vaccines, notifying us. So, in that moment I feel less stressed.”

“Medical and mental health provision must meet farmworkers in their places of residence, at daily transit points, and at the workplace.”

For many migrant farmworkers, COVID-19 housing, testing, and vaccine programs were among their first experiences with affordable healthcare in the United States. But our research suggests that free services are not enough to make care accessible. Stressors from workplace conditions, English-language communication, and long work hours means that healthcare must travel to farmworkers. Medical and mental health provision must meet farmworkers in their places of residence, at daily transit points, and at the workplace.

This means that trusted, Spanish-speaking community organizations are not ancillary, but  central to what a truly accessible system of farmworker healthcare must look like. Yet while local governments across California have largely used American Recovery Plan Act funds for public safety and bonuses for government staff, community-based organizations struggle to find financial support and often rely on volunteers and underpaid staff members. 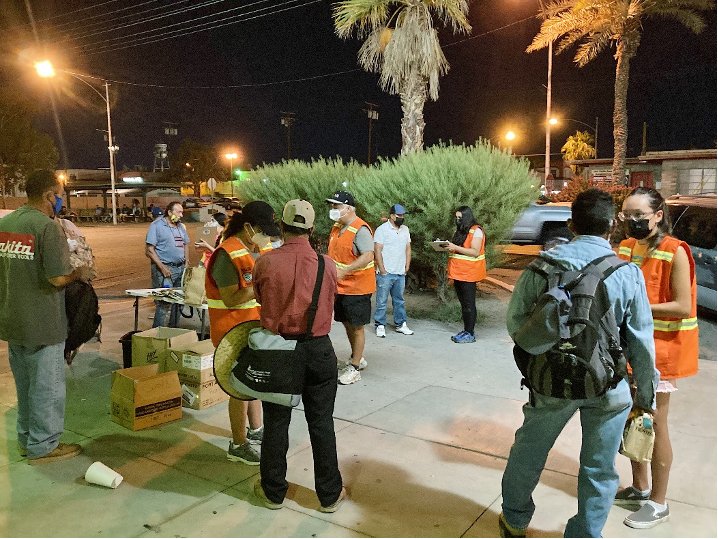 If we want to ensure a continued workforce for our farms and prevent a massive ongoing mental health crisis among farmworkers, funding programs must recognize the critical role of trusted community-based organizations in providing critical resources to our burdened agricultural workers. Nationally, these types of resources and efforts can address inequities in access to mental health services, as well as other vital services such as education. Federal, state, and local governments must see community organizations as key providers of localized care and invest to bring more mental health care workers to these communities.

Amy Quandt is an environmental social scientist and human ecologist in the Department of Geography at San Diego State University. Her work addresses issues surrounding agroforestry and natural resource management, particularly in East Africa. She explores the use of mobile technology in agricultural development and study local perceptions of drought and climate change. She spent five years living and working in East Africa working with international organizations that place an importance on grassroots movements and local participation, including the World Agroforestry Centre, Kenya Red Cross Society, Peace Corps Tanzania, and USAID. Read more >

Luis Flores, raised in Calexico, is co-organizer of the Imperial Valley Equity and Justice Coalition (IVEJC), a community group that advocates for health equity, environmental health, and social justice. He is a doctoral candidate in sociology at the University of Michigan and received his BA in political economy from UC Berkeley. With his sister, Daniela, he writes a monthly opinion column for their hometown paper, the Calexico Chronicle. Read more >