Without Congressional action, the pandemic-era waivers will expire on June 30.

June 27, 2022 update: On June 25, President Biden signed an extension of school meal waivers passed by Congress. The bill includes free meals for all students through the summer and extends some flexibilities through the 2022–23 school year. However, Democrats were forced to remove a provision that would have extended free meals to students in the reduced-price category in order to get enough Republican support for passage.

Since March 2020, despite unprecedented labor and financial constraints, school nutrition directors have largely been able to adapt their meal programs to meet the ongoing pandemic-driven challenges of getting healthy meals to the nearly 30 million children who depend on them. They’ve been able to swap ingredients to manage shortages of certain foods; package meals and send them home when necessary; and offer free meals to all students. But none of it would have been possible without U.S. Department of Agriculture (USDA) waivers that were authorized by Congress—and those are now set to expire on June 30.

“All of those flexibilities, collectively, will disappear on July 1,” said Jillien Meier, director of partnerships and campaign strategies for Share Our Strength’s No Kid Hungry campaign. She worries that the shift could be, “absolutely catastrophic for schools, but even more catastrophic for kids and their families.”

With the waivers in place, schools served more than double the number of summer meals in July 2020 and 2021 compared to previous years. Share Our Strength estimates that the expiration could mean that children will miss out on 95 million meals this summer and that schools will struggle to feed children during the 2022–2023 school year. And it’s one of thousands of organizations—including the powerful School Nutrition Association—that have been pushing Congress to extend the waivers for months.

In March, Republicans prevented the provision from being included in a spending bill, and they have since (with some exceptions) opposed new measures introduced by Democrats and championed by Senator Debbie Stabenow (D-Michigan). Agriculture Secretary Tom Vilsack has expressed support for extending the waivers, but the USDA’s authority is constrained by Congress. “This has become a partisan issue. We are not hearing [of] any compromises,” Meier said. 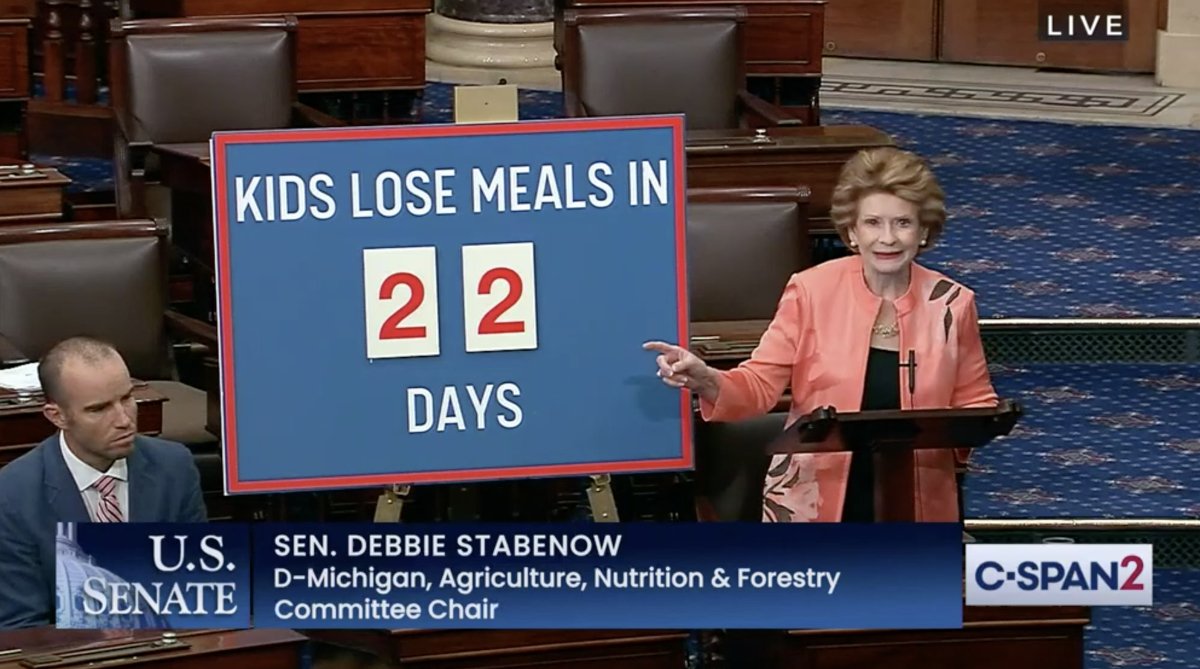 While those who oppose the extensions point to the fact that children are back in school, many parents are back to work, and meal programs should be able to go back to pre-pandemic operations, Meier said that in No Kid Hungry listening sessions, school nutrition directors are reporting that in some ways, they are facing even tougher challenges compared to two years ago. While quarantines and delivery meals have ended, COVID absences have meant lower participation in meal programs, which tightens budgets. Directors still can’t find many ingredients, and deliveries are inconsistent. With inflation soaring, they’re paying significantly more for food. According to a recent report from the Food Research & Action Center, more than half of districts surveyed identified supply chain disruptions, rising food prices, and labor shortages as significant challenges during the 2021–2022 school year. “There is nothing normal about the situation they’re operating under right now,” Meier said.

As the deadline approaches, many groups are turning to state policy advocacy as a pathway to expand school meal flexibilities in the absence of federal action. California, Maine, and Vermont have already passed laws guaranteeing universal school meals, while similar bills are moving forward in New York, Colorado, Minnesota, and Massachusetts.

Meier said those efforts are commendable but in the end, state action alone will likely just result in inequality. “Particularly in the South, where hunger is most acute in rural communities of color, they’re not going to get the benefits,” she said. “That’s my biggest concern: In the places where we already had a hunger crisis pre-COVID, we’re only going to see inequities get exacerbated.”

Read More:
The Pandemic Reveals Racial Gaps in School Meal Access
As School Meal Programs Go Broke, a Renewed Call for Universal School Meals
The People Behind School Meals Are Pushing for Free Access for All

A Standard for Salmon Welfare? While a wide range of animal welfare certifications exist for chickens, pigs, and cattle, fish farmed for food have not been afforded the same attention over the years. Now, Global Animal Partnership (GAP) is wading into new waters with its first certification program for farmed Atlantic salmon. GAP, which works closely with Whole Foods Market, is known for its five-step certification system that covers more than 400 million land-based farm animals around the world, from turkeys and laying hens to beef cattle and bison. It is a well-respected certification in the industry but has also been accused of “humanewashing” by some advocacy groups. The new salmon standard has three levels that include requirements such as minimum stocking density, water quality monitoring, and enrichments to the environment. In a press release, Ben Williamson, the U.S. Director of Compassion in World Farming, said, “The new GAP standards for Atlantic salmon are now the highest and most comprehensive available.”

Read More:
Will Fish Get Their Animal Rights Moment?
What the History of Salmon Can Tell Us About the Future of the Planet

Fighting for Farmworkers. To show his solidarity with immigrant farmworkers, Senator Alex Padilla (D-California) recently headed to the fields, harvesting and packing parsley and radishes alongside workers in Southern California. But the event once again resurfaced previous disagreements over immigration reform in the conversation around farm labor and justice. Padilla used the media opportunity to express his support for the Farm Workforce Modernization Act, a bill that would create a pathway to legal status for some undocumented farmworkers, expand the controversial H-2A guestworker program, and require employers to use an electronic verification system to certify immigration status. It’s supported by the United Farm Workers, who hosted Padilla in the fields, and by Farmworker Justice. But other food and farm labor groups firmly oppose the legislation, and this week, the Food Chain Worker Alliance reiterated its position on Twitter. “The Farm Workforce Modernization Act has not changed, it’s still a deportation and anti-labor bill that will hurt farmworkers for generations,” the group wrote.

Read More:
A Path to Citizenship is on the Horizon for Undocumented Farmworkers
The H-2A Guest Worker Program Has Ballooned in Size; Farmers and Workers Want it Fixed