People gather for a rally held in support of street vendors targeted by NYPD in Manhattan on May 07, 2021 in New York City. (Photo by Michael M. Santiago/Getty Images)

María Falcon has been a street vendor in New York City for 14 years. During the summer she sells mangos and other fruit to commuters passing through Broadway Junction. During the winter, it’s churros. Late last month, Falcon was arrested by the NYPD as part of a crackdown of alleged quality-of-life violations by the [Eric] Adams administration. She was brought to the NYPD station in handcuffs, and then strip-searched, while all of her belongings were destroyed. She was released a few hours later with a summons.

“I would get hassled by the police, sometimes they would throw out all my products, but I had to fight for my daughters.”

Falcon says that she sells fruit in the subway station out of necessity. After a video of her arrest, taken by her daughter, went viral over the weekend, Mayor Adams told reporters that New Yorkers must “follow the rules,” and that people might start “barbecuing on the subway system,” if vendors like Falcon weren’t criminalized.

Hell Gate spoke in Spanish with Falcon by phone on Monday night. The interview has been translated and edited for clarity.

When did you come to New York? And why did you migrate to the United States? 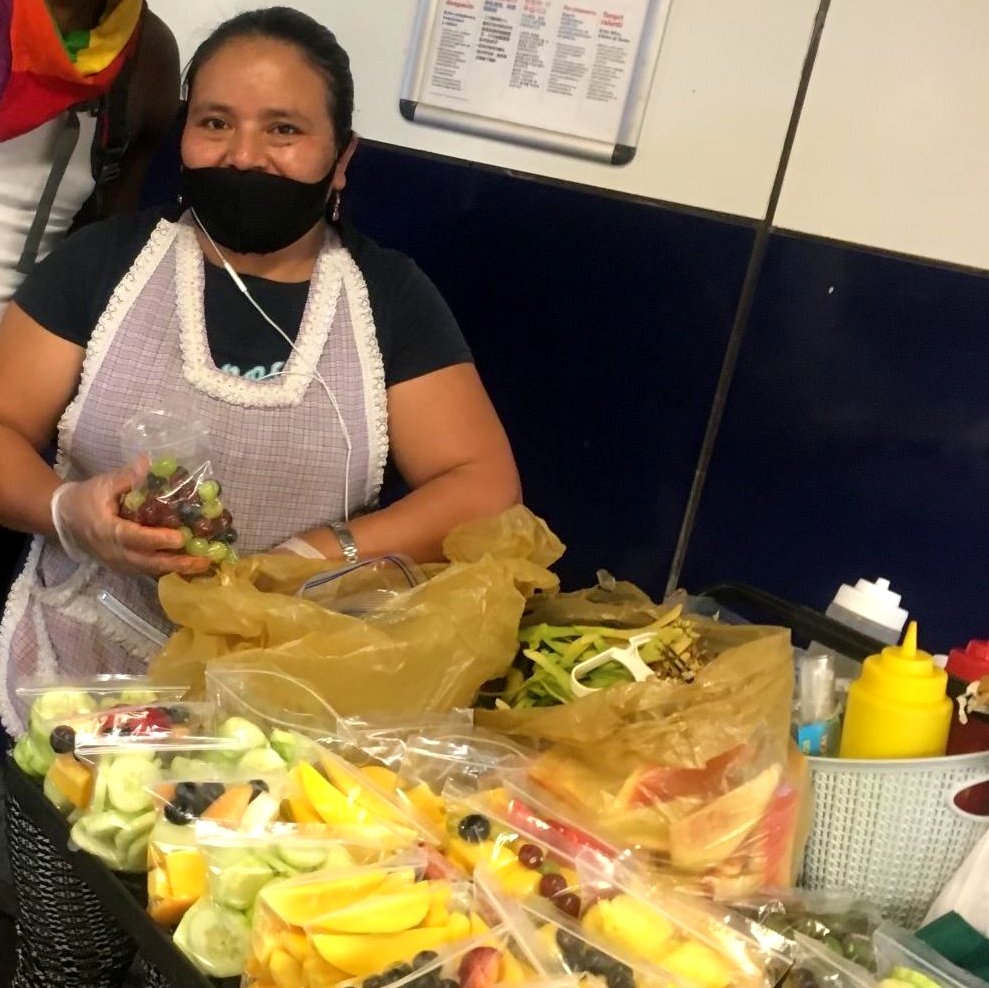 I came in September of 2007. I’m from Ecuador. The truth is that I came to work and fight for my life. Back home, I was suffering from extraordinary poverty. We had nothing. My husband, he left me—and we had two daughters. I had to migrate. If you worked all day in my country, you’d make around $5 a day. My two daughters needed to eat, needed clothes. We had to come to the United States.

One of my daughters is now 27. The other is 23. I have another daughter that’s 13. I also have four grandchildren now.

When did you start selling fruit on the subway?

I started in 2008, selling ice cream in the street in Brooklyn. On Eastern Parkway, also in Prospect Park. Wherever I could. In 2009, I started selling fruits in the train stations, and during the winter I would sell churros. I would get hassled by the police, sometimes they would throw out all my products, but I had to fight for my daughters. I had to keep fighting.

How much do you make on a good day?

What’s the best part of your job?

I love to be a vendor because I have a daughter that I need to take to school and that I have to pick up. I also have three grandchildren now that I help take care of. I’m able to take them to school, then I can go work, then I can pick them up. For that reason—the flexible hours—I’m able to help my children and grandchildren. One of my daughters doesn’t have a husband. She has a 3-year-old and she needs to work—sometimes until three in the morning. So I have to be there for them.

What’s the worst part of your job?

When the police come. The other day, they took everything. Chocolates, mangoes, my cart, absolutely everything. They left me with nothing. Then I need to go buy everything again. A cart, all the fruits, everything.

I want them to understand that we can’t stop working, we’re not hurting anyone. I’m poor—but I work. I can’t go back home to Ecuador. My family needs me here. For this reason, I keep working.

What have your experiences with the police been like?

I’ve been given notices to appear in court, tickets, things like that. I need a lawyer to go to court, which I will have to get.

What happened when you were last arrested, on April 29th?

“I don’t like relying on government programs. We come from a town of workers. We need to work.”

I was taken to the police station this time. They took everything from me. But then I got checked by a female police officer, they inspected my body to see if I had a weapon, other things you’re not allowed to have in jail. If you have drugs or something like that, but I had nothing! Nothing! They made me take off all my clothes. Take off my shoes. I was in a cell for two hours. And then they let me go with a court date in 20 days after that.

Do you have a license to be a street vendor?

Yes, I have a license. I pay each year.

But the problem is that the license doesn’t let you sell in the subway.

This is the problem. I can’t use my cart. And honestly, it’s not the police who notice us. It’s the MTA.

Where do you live?

In Woodhaven, Queens. Near the A and the J train.

How long have you been a vendor at Broadway Junction?

Since 2010, and that’s where I do almost all of my work now. It’s busy in the station all day. But on the street, it’s too competitive—people are underselling you. You can’t live like that. I need to pay rent. I pay $2,200 for four rooms. That’s just for a home! That’s not counting food. And I don’t like relying on government programs. We come from a town of workers. We need to work. The only thing we rely on is Medicaid for my daughter. We don’t ask for handouts or anything like that. We’re fighters.

What’s your favorite food that you sell?

Oh, I don’t have a favorite, they’re all equal to me. But people love the mango during the summer, with the spice on it. And it’s all very sanitary—we change gloves each time we touch the fruit. We have Clorox, the whole thing is very clean. People love how clean and well-presented my fruit is. People want the fruit, I’m not obligating them to eat it!

Did you see what the mayor said on Monday about your arrest?

No. I haven’t heard anything.

He said that you had to be arrested because if you weren’t, then people would feel like they could do things like grill on subway platforms, have gas tanks, things like that.

No. No. No. No. I’m in agreement about that. In truth, there are people taking advantage of the situation. Sometimes, there’s vendors with two or three people working at a table they’ve set up—that gets the attention of the police. That’s totally different from what I sell. These are people abusing what we have.

For me, it’s just me and my cart. I don’t bring that much stuff, but there are people that abuse it. I agree with the mayor here. I care about safety, you can’t have people cooking on the platforms. We are very, very careful selling on the platforms, we are a very small operation. You don’t need much to sell fruit. We respect the space—we’re from this neighborhood. When school lets out, it gets too crowded, and we leave the platforms.

What would you tell the mayor about street vendors like yourself?

We sell out of necessity. We need to work, to fight. He needs to understand us, please let us just sell in the train stations. If it’s just two or three people per station, that’s fine. We can pay for the license if we have to. We’re not going to barbecue or anything like that.

Max Rivlin-Nadler is a co-publisher of Hell Gate. He's reported for Gothamist, The New York Times, Village Voice, and NPR. You can find him walking his dog, Stiva, or surfing in the Rockaways. Read more >