‘To save ourselves, we have to save the bees’: Caroline Yelle is breeding queen honey bees to survive the changing climate and multiple other threats.

When the lightning-sparked Hennessey Fire, part of the LNU Lightning Complex Fire, swept through rural Vacaville, California, in August 2020, queen bee breeder and beekeeper Caroline Yelle thought she had lost her entire business.

“The fire destroyed everything in its path: the bees, my hives, the whole farm,” says the 29-year-old owner of Pope Canyon Queens (PCQ), who lost more than 400 hives. But out of the ashes, Yelle—and a new set of bees—have risen. “It was a huge bump in the road for us, but it has allowed us to do better.” 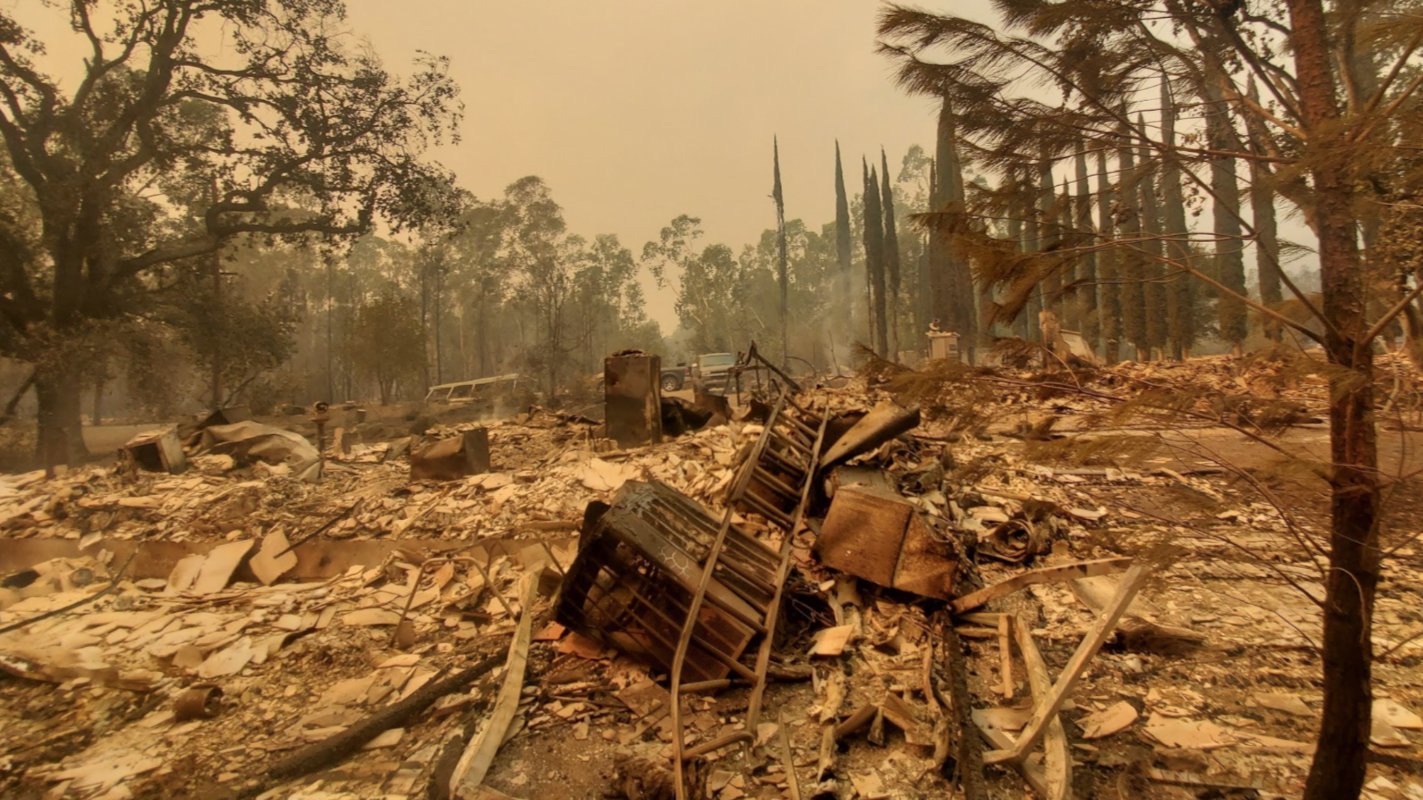 The aftermath of the LNU Complex Fire. (Photo courtesy of Caroline Yelle)

Now, almost two years later, and thanks to the support of her community, Yelle is back to breeding queens. She works with Carniolans, or Apis mellifera carnica, a hybrid she selected back home in Canada and reproduces in California in hopes that their genetic strengths can make them resilient to the many challenges facing honey bees today. Today, she has about 580 hives.

Pollinators, most often honey bees, are responsible for one in every three bites of food we take, and they help increase U.S. crop values by more than $15 billion each year. However, critical honey bee populations have been in serious decline for more than three decades in the U.S. due to high rates of colony loss, which stems from many factors, including habitat loss, decreasing crop diversity, increased use of pesticides and other toxins, climate change, and pests and pathogens. Other factors include industrial beekeeping practices—particularly in the large-scale almond industry.

This year alone, 2 million beehives—containing about 42 billion bees—were brought into the state to pollinate almond blossoms.

“If there are no bees, there is no food,” says Yelle. “To save ourselves, we have to save the bees.”

The U.S. Department of Agriculture considers commercial honeybees to be livestock, due to their crucial role in food production. However, more bees die every year in the U.S. than all other animals raised for slaughter combined; during the winter of 2020–21, an estimated 32 percent of managed colonies in the U.S. were lost.

‘Give Bees a Chance’

In 2018, Yelle purchased PCQ from her mentor and business partner, veteran beekeeper Rick Schubert, for whom she began working in 2012. She had studied to be a lawyer in Canada, but after receiving her degree, moved to California to follow her dreams to help the bees. Between March and June every year, Yelle breeds roughly 25,000 queen bees. Since building back her business, she says the number of requests for her queens has been on the rise, and beekeepers who’ve received them tell her that their hives are now thriving.

Bee breeder-geneticist Susan Cobey, who has worked with Yelle, is a former manager of the Harry H. Laidlaw, Jr. Honey Bee Research Facility at U.C. Davis. She has worked with Carniolan honey bees for more than 40 years, and has run one of the longest-running breeding programs in the world. Numerous studies clearly show that genetic diversity improves bee colony survival, and Cobey now incorporates honey bee germplasm from several European subspecies into U.S. breeding stocks to increase colony vitality and resistance to pests and diseases.

“Bees are probably one of the most complex animals to work with because they mate in flight, which is difficult to control,” says Cobey, noting that honey bees are sensitive to inbreeding and also at risk of population loss through the breeding process. 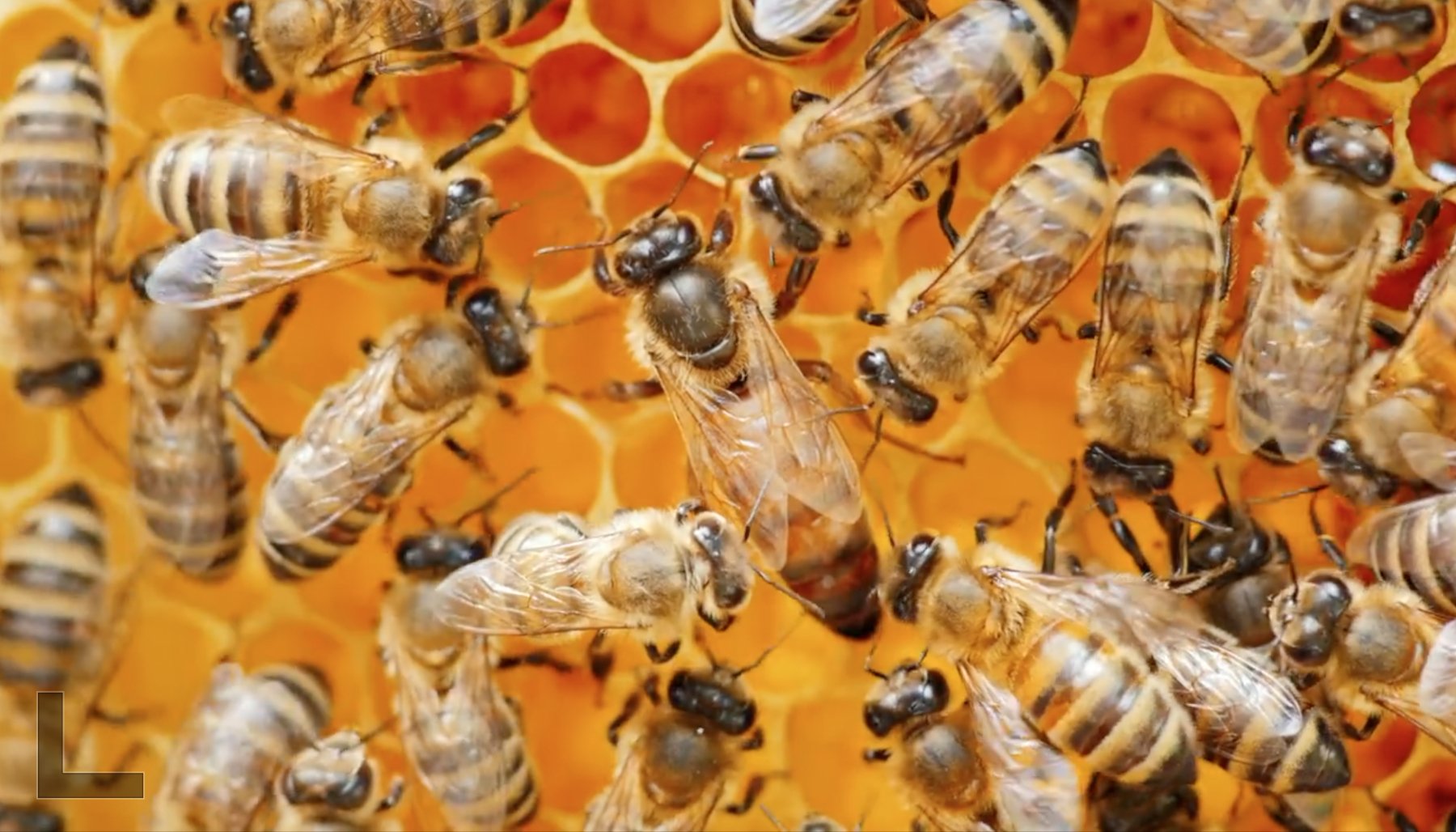 Queen bees mate with an average of 15 to 20 drones (male honey bees), so breeders like Yelle and Cobey mate the bees artificially under a microscope by anesthetizing the queens with carbon dioxide. They use a pool of genetic material from numerous drones to provide diversity.

The Carniolan honey bee, originally from Slovenia, a hotbed of successful beekeeping, holds a special place in the hearts of many beekeepers. Also known as a spring bee for its activity early in the season, it is also sought after for its gentleness and productivity, and is also considered highly resistant to the Varroa mite, which has become a major contributor to the demise of bee colonies worldwide.

California’s ever-expanding almond industry is worth $6 billion, and produces roughly 80 percent of the world’s almonds. Almonds are the state’s top agricultural export, hitting a record export high of $1.1 billion in 2020, with most of the crop sent to India and China. Demand nationally is also at an all-time high, in part because of sales of almond milk climbing each year.

And the need for pollination of hundreds of thousands of almond trees has created a monoculture of sorts for the honey bee: This year alone, 2 million beehives—containing about 42 billion bees—were brought into the state to pollinate almond blossoms.

“Almond production is the economic stabilizer of the bee industry,” says Cobey. “If you’re a commercial beekeeper, you pretty much cannot afford not to go to that crop. But at the same time, you’re bringing bees all together in a really crowded situation and diseases are easily exchanged; pests and parasites are easily exchanged. And you have all different levels of beekeeping [experience].”

Poor beekeeping practices have also led to more bee deaths, and recently, hive thefts. Around 600 hives were stolen across California last year and more than 800 have been taken so far this year, according to Butte County Sheriff’s Deputy Rowdy Freeman, a beekeeper, a law enforcement liaison to the California State Beekeepers Association, and president of the California Rural Crime Prevention Task Force.

The rapid growth of the almond industry and the speed at which millions of trees need to be pollinated every spring has taken a toll on the bees. “There is so much pressure [on the bees—from] being moved from one location to another to the stress from the trucks, and then they get to a new location and they have to reorient to where the food and water is. Then they pollinate the same flowers for weeks,” says Yelle. “As soon as they begin to adapt to that environment, we put them back on a truck and start all over again.” 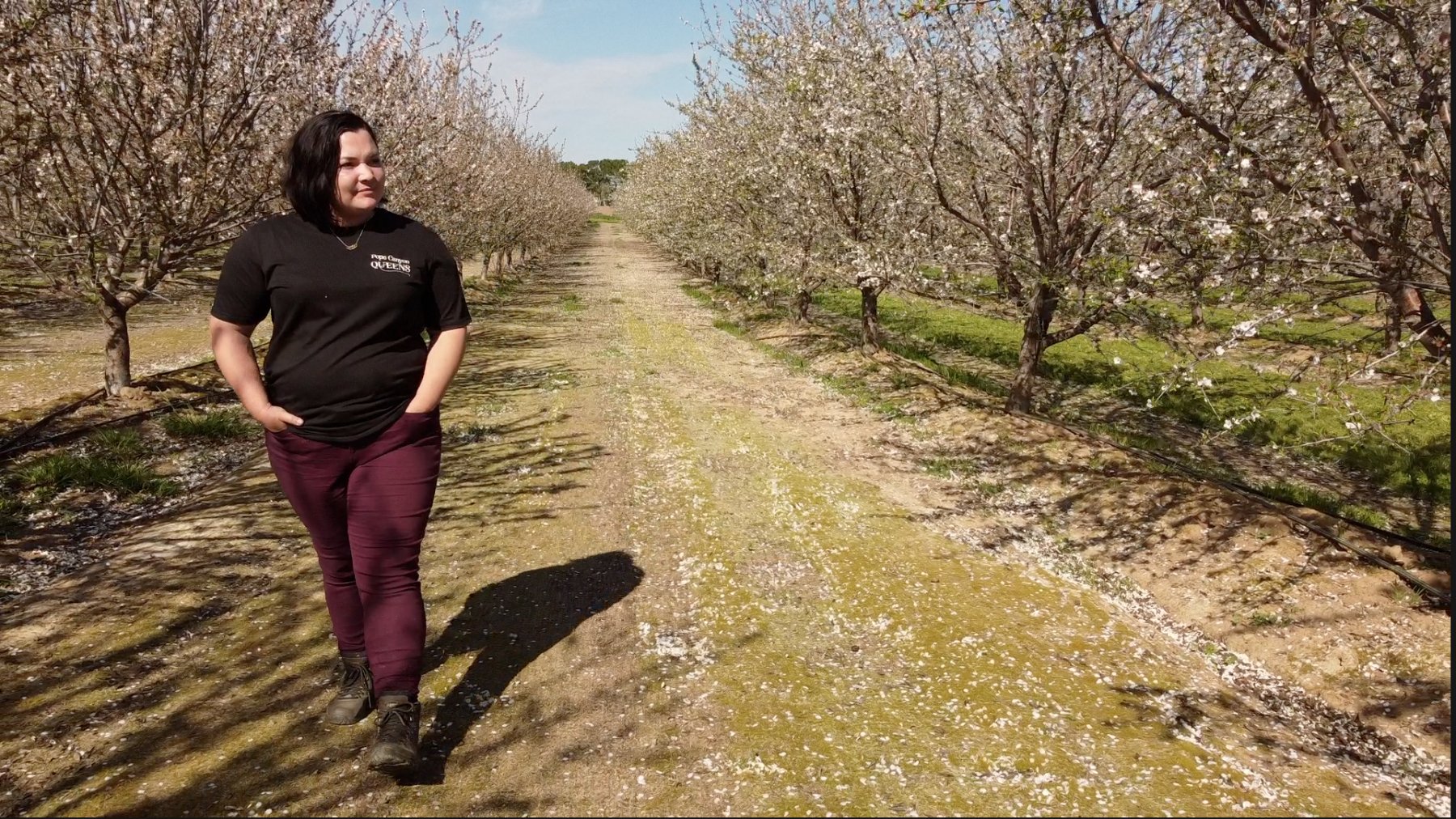 After the almond pollination period comes to an end, Yelle takes her bees to diverse, organic farms—she calls them “spas” for the bees—to recuperate.

PCQ is one of the nation’s few women-owned queen bee breeding businesses, and Yelle’s team is mostly female. She believes women are especially adept at beekeeping and breeding. Cobey agrees.

“The women in this industry are very persistent, and I think they have to be overly so to prove themselves. It may be less so now than 10 or 15 years ago, but queen bee rearing is really attractive for women because it’s a little more specialized; it takes a lot more knowledge of the bees,” Cobey says. “I call it ‘bee sense’—you just have a sense of the smells and the sounds and the activity and behaviors. It takes a lot to learn all that. And I think women are maybe more sensitive.” 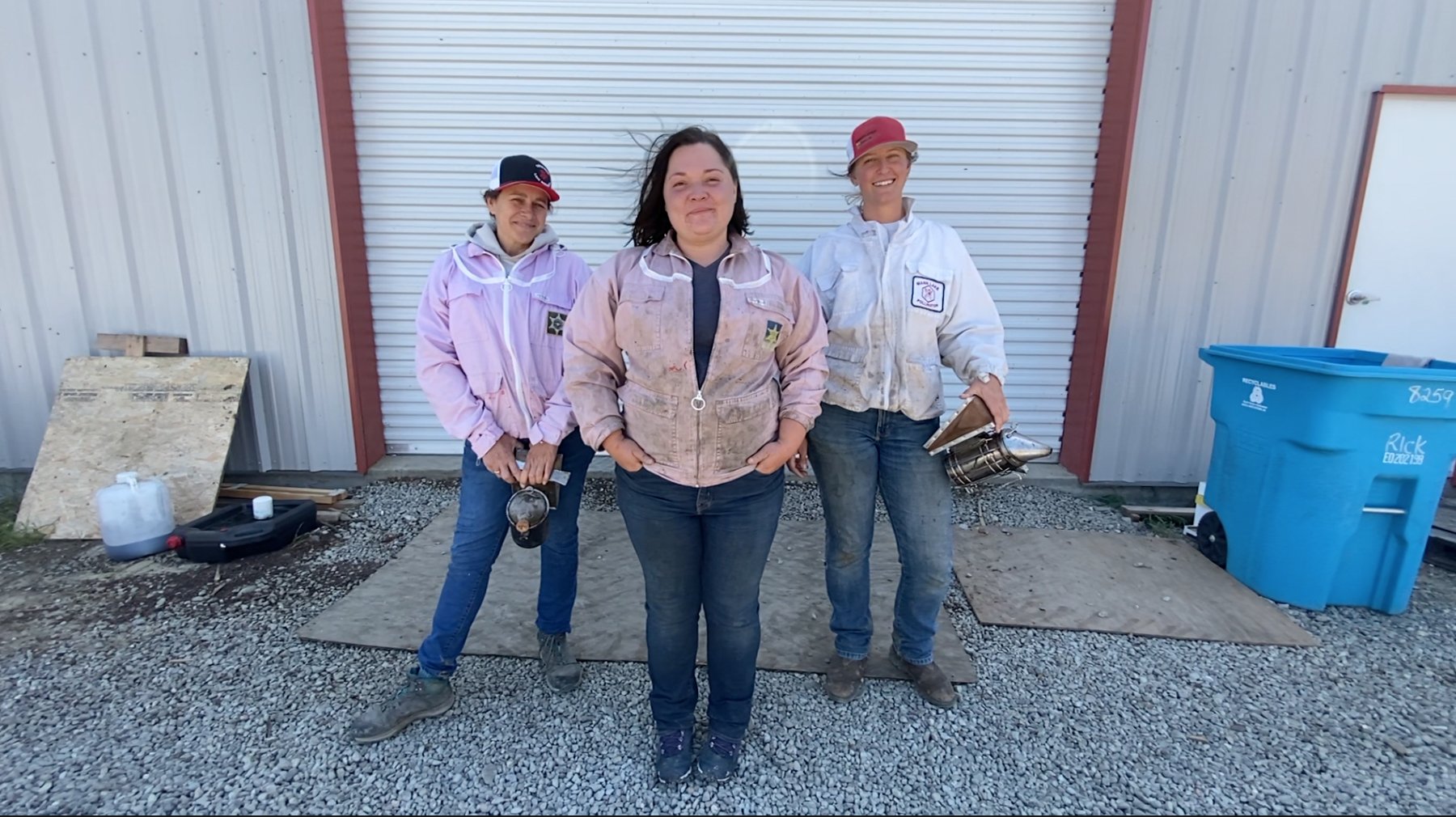 Caroline Yelle (center) with members of her beekeeping team.

Yelle’s business is still on the rebound, but as California prepares for another hot, dry summer, she intends to continue breeding better, more robust queens. “A queen bee is a reflection of the health of the hive. The bees will follow her habits, so, it might increase the resistance to pests and disease, and help them adapt to a changing environment,” she says.

“My goal is to help the bees survive. When your queen is healthy, it’s a huge accomplishment,” Yelle says. “Let them do their work, and bees will bring food to your table.” 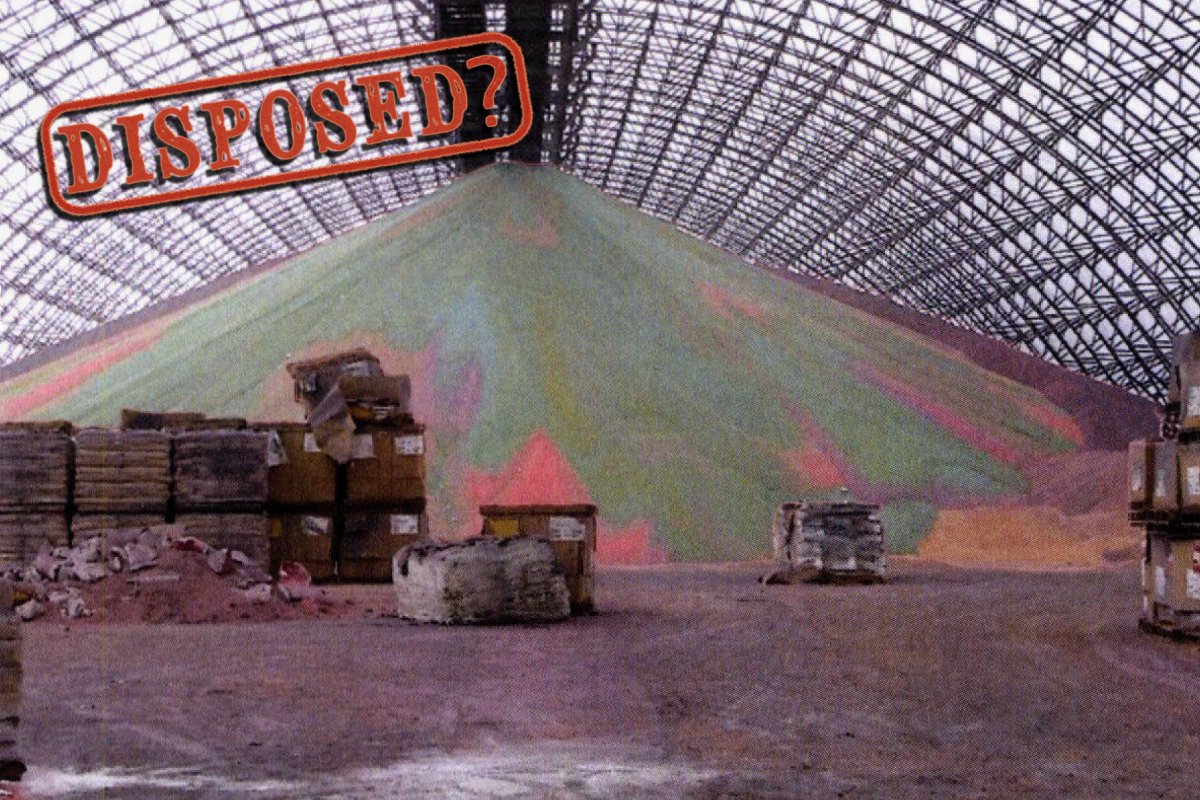