The latest report from the IPCC notes that, while eliminating fossil fuels is the first priority, land- and diet-based solutions could provide a quarter of world’s urgently needed emissions cuts. 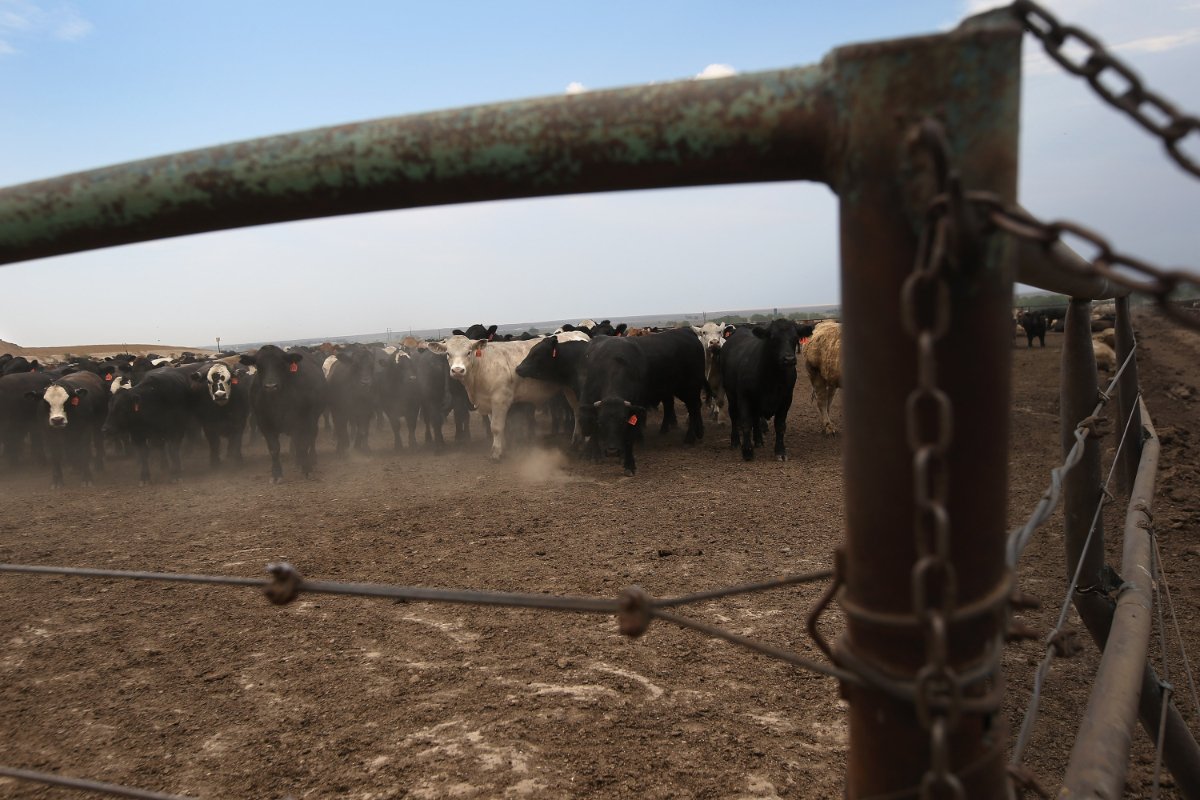 According to the world’s top climate scientists, greenhouse gas emissions continued to rise over the last decade, and that trend must be stopped by 2025 in order to limit warming to 1.5°C and avoid catastrophic impacts.

Released today, the latest installment of the United Nations’ Intergovernmental Panel on Climate Change (IPCC) Sixth Assessment Report charts a path toward cutting emissions and reducing warming. As the panel makes abundantly clear: While an immediate, rapid phase-out of fossil fuels remains paramount, agriculture, forestry, and food systems solutions are a non-negotiable piece of the puzzle. In fact, the report authors estimate that the sector can provide nearly one-third of the greenhouse gas reductions needed.

“This sector can not only provide large-scale reductions of emissions but can also remove and store CO2 at scale,” said lead author Mercedes Bustamante. “Well-designed, land-based mitigation options to remove carbon can also benefit biodiversity and ecosystems, help us adapt to climate change, secure livelihoods, improve food and water security.”

The Working Group III Report is dedicated to climate change mitigation, or strategies for making it less severe, and it closely followed the second report in the series, which assessed the scale and nature of threats to the planet’s landscape and people and strategies for adaptation. The first report, released last August, relayed the most up-to-date physical science on climate change, including the rate of warming; U.N. Secretary-General António Guterres called it “a code red for humanity.”

Overall, this week’s report found that while the rate of emissions decreased between 2010 and 2019, average annual emissions were still higher than during the previous decade due to rising global activity from industry, energy, transportation, building, and agriculture. In the “agriculture, forestry, and other land use” sector, the rate of deforestation (which is a major source of emissions) decreased—but methane emissions primarily from cow burps and nitrous oxide emissions from fertilization of cropland continued to increase. And the report zeroed in on methane across all sectors: For a 1.5°C pathway, methane emissions must come down by 34 percent by 2030 and 44 percent by 2040.

Implementing solutions is equally urgent: The authors found that the current commitments countries have made to emissions reductions and energy transition would fall short of what’s necessary to achieve that goal—even if countries were on track to meet those commitments, which they currently are not. The report calls for a bolder, immediate transition to renewable energy across all sectors, which could be facilitated by the fact that the cost of renewable energy technologies like wind, solar, and batteries for electric vehicles has fallen consistently since the IPCC’s last assessment in 2014. And simply ending fossil fuel subsidies could by itself reduce emissions by 10 percent by 2030.

Many of the food-system and forestry solutions laid out in the report are also ready to be deployed right now at a low cost, the authors note. Preserving and restoring forests, peatlands, wetlands, and other land ecosystems have the greatest potential to make an impact followed by agricultural strategies including soil carbon management through grasslands and cropland, agroforestry, improved rice cultivation, and livestock and nutrient management. Demand-side solutions including shifting to diets higher in plants and lower in animal products and reducing food waste round out the list.

Of course, the authors note that many of these solutions have been understood for decades, but due to political realities, they have been deployed way too slowly. (The powerful global meat industry, for example, has been fighting all regulation and any messaging around reducing meat consumption for years.)

Across all sectors, “Politics and status-quo interests—not science, money, or technology —remain the primary barriers to meeting climate targets,” the authors write. And time is running out: For agriculture and forestry to deliver the full 30 percent share of emissions reductions it’s capable of, an estimated $400 billion will need to be invested globally, the authors say. And while that sounds like a huge number, “This estimate of the global funding requirement is smaller than the current subsidies provided to [farmers engaged in conventional] agriculture and forestry. A gradual redirection of existing agriculture and forestry subsidies would greatly advance mitigation,” they say.

Last week, in advance of the IPCC release, multiple organizations published their own reports on specific ways in which climate mitigation is linked to food and agriculture. Here are highlights from a few.

How Climate Solutions Can Alleviate Hunger. Purported negative impacts on the economy and working people are often cited as a reason not to implement aggressive climate change mitigation measures, but a new report from Project Drawdown outlines how climate mitigation measures can improve outcomes for people living in extreme poverty.

The report looks at Sub-Saharan Africa and South Asia, where rates of poverty and food insecurity are high and communities are already disproportionately experiencing the impacts of climate change. It identifies “win-win” solutions—including agroforestry, protecting and restoring ecosystems, and adopting clean cooking—that can reduce greenhouse gas emissions while also providing health and well-being benefits such as increasing income and food security for people in poverty.

“Improving the well-being of people experiencing extreme poverty and addressing climate change can and must be complementary,” the report’s authors write. “There should be no trade-offs between human well-being and climate action.”

Indigenous Lands as Carbon Sinks. Researchers from Climate Focus and the World Resources Institute (WRI) released a report through the Forest Declaration Platform that underscored the importance of preserving Indigenous lands to meet global climate targets. According to the report, 92 percent of forested Indigenous peoples and local communities’ (IPLC) lands in Brazil, Columbia, Mexico, and Peru are net sinks of carbon dioxide. And, on average, those lands sequester more than twice as much carbon as is sequestered in lands managed by other actors.

“The emissions sequestered in IPLC lands each year have the potential to play a major role in helping countries meet their NDCs [Nationally Determined Contributions]. These lands currently sequester amounts equivalent to an average of 30 percent of our focus countries’ unconditional NDC targets for 2030, despite constantly being invaded by ranchers, loggers, and miners,” said Juan Carlos Altamirano, a WRI economist, in a press release. The report authors said existing policies in all four countries “fall far short of what is needed to realize the mitigation potential offered by IPLC lands.” Leaving that carbon in place—by preventing development in these regions—is therefore more valuable to the climate than many other forms of mitigation.

More Attention to Methane. The Global Alliance for Incinerator Alternatives, the Changing Markets Foundation, and the Environmental Investigation Agency (EIA) also released a report outlining the action necessary to reduce methane emissions enough to limit warming to 1.5°C. The authors note that while more than 100 countries committed to reducing methane emissions 30 percent by 2030 at COP26, the U.N.’s Global Methane Assessment found emissions of the powerful greenhouse gas actually need to be cut by 45 percent within that timeline. They look at the most effective strategies in the energy sector and at the powerful impact of eliminating food waste, first by preventing it, but also by diverting more of it to compost or anaerobic digestion rather than sending it to landfills.

Most importantly, they point to agriculture as the largest source of methane emissions and as the sector most often exempt from government regulation. And many of their recommendations overlap with the IPCC report: Rice paddy interventions that reduce the amount of time fields are flooded can make a big difference, they say, and technical solutions to livestock emissions like feed additives and better manure management may also help move the needle.

But while those fixes still come with limitations and uncertainties, they wrote that “reducing the number of animals remains the most significant solution to reduce absolute emissions from the livestock sector.” They group also argued that governments should be taking action to promote and incentivize plant-rich diets. In a press release, Changing Markets Foundation Campaigns Director Nusa Urbancic summed up the sentiment: “Governments must find renewed energy to drive the adoption of healthier diets and more resilient food production systems and make this a central part of their methane reduction plans.”

Read More:
Methane from Agriculture is a Big Problem: We Explain Why
Could Changing the Way We Farm Rice Be a Climate Solution?

Where Does Organic Farming Fit In? The climate crisis was front and center at the Organic Trade Association’s annual conference in Washington, D.C. last week, where the industry’s biggest players came together to discuss a range of issues including trust in the organic label and diversity and equity in the industry and to lobby lawmakers on the Hill. During one panel focused on “models for effective climate action,” a USDA undersecretary continued the agency’s ongoing emphasis on “voluntary, incentive-based” programs for farmers, rather than the kinds of mandatory requirements that climate experts are urgently calling for.

And it appeared that organic’s position in policy discussions around climate at the USDA remained fraught. During a keynote address, Jenny Lester Moffitt, undersecretary of agriculture for marketing and regulatory programs, said that “It is important that organic is at the table on all of the work we do on climate-smart agriculture,” and referred to the fact that organic projects are eligible for the new climate-smart commodity project grants as an example.

But Kathleen Merrigan, who worked under Secretary Vilsack as the deputy ag secretary during his first term under President Obama and has spoken out about her disappointment with his emphasis on fertilizer- and chemical-dependent systems, followed Moffitt and was harsh regarding the USDA’s treatment of organic within climate initiatives.

“I’m really anxious about all the climate stuff going on, and I don’t necessarily see organic seated at that table in a meaningful way,” she said. “I just want us to be very loud and very demanding because our health and our planet depends on it.”

Read More:
Can Organic Farming Solve the Climate Crisis?
What Is the Future of Organic?