By Claire Child and Stephanie Clark 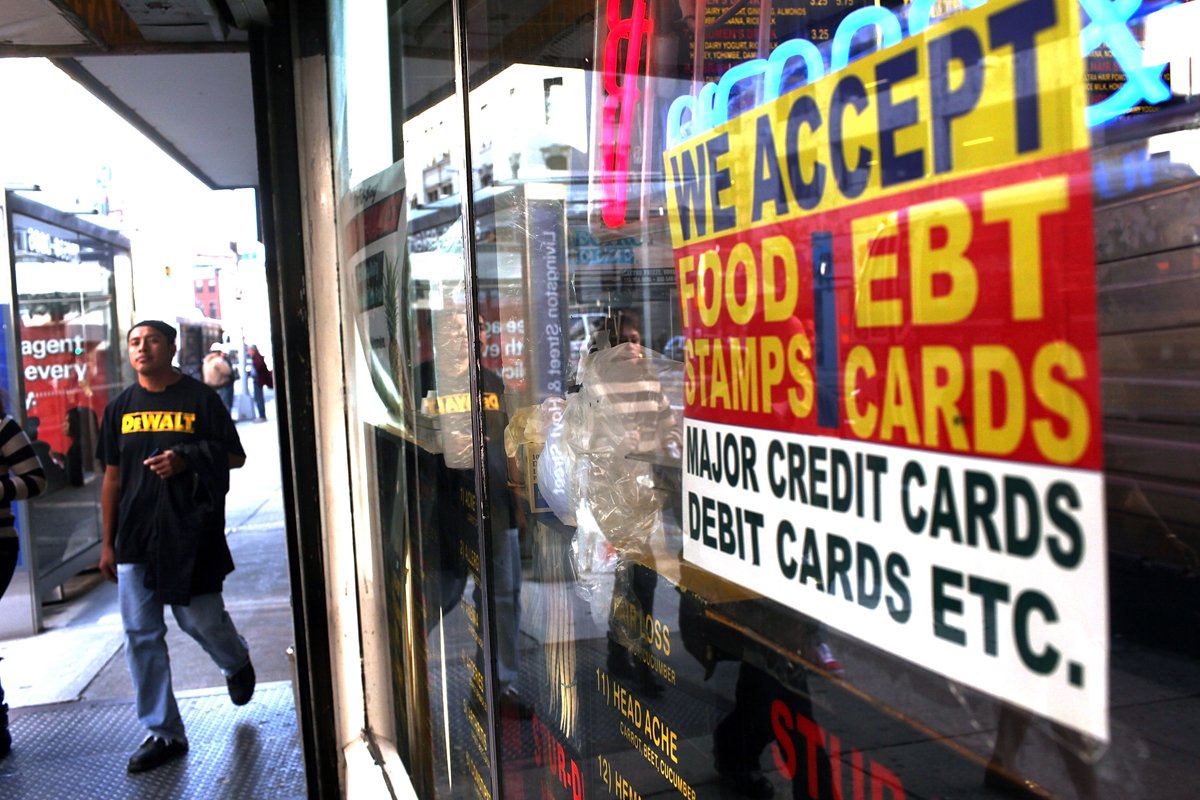 After spending years caught in a cycle of addiction and incarceration, Tracy Jividen found that one of the biggest barriers to getting back on her feet was hunger. Due to a law that was active in her home state of West Virginia at the time, Jividen’s criminal record barred her from receiving help from the Supplemental Nutrition Assistance Program (SNAP). Her kids were eligible, but she faced a terrible choice—eat the food she was buying for them through the program or go hungry.

When she was caught forging a check in a grocery store in 2017, she was sent back to jail. “If they just gave me food stamps, I would not have to do this,” Jividen told NPR in 2018. The following year, she helped lobby to get the law in the state changed, but the fight isn’t over.

“In two states, people with a felony drug conviction are barred from accessing SNAP for life, although this is only enforced in one: South Carolina.”

First established 60 years ago as “food stamps,” SNAP has done an impressive job of reducing food insecurity among low-income households. Millions of the most vulnerable Americans access food through SNAP each month, and it generates between $1.50 and $1.80 in economic activity for every dollar spent.

But rules like the one that Jividen faced prevent tens of thousands of Americans—if not many more—from accessing assistance when they need it most.

In two states, people with a felony drug conviction are barred from accessing SNAP for life, although this is only enforced in one: South Carolina. In many other states, additional barriers can discourage or complicate participation for people with a felony drug conviction. That has sweeping consequences, particularly among Black Americans who face higher incarceration rates and unemployment.

As the U.S. faces the fallout from its overuse of incarceration during the decades-long war on drugs and the families that have been the most impacted by the last two years of the pandemic struggle to get back on their feet, it is past time to repeal this rule, which exacerbates poverty and hunger and contributes to systemic racial inequity.

Punished for a Lifetime

Congress passed the Personal Responsibility and Work Opportunity Reconciliation Act (PRWORA) in 1996, requiring employment for public assistance recipients and restricting when they are eligible to receive benefits. Buried in the bill was Section 115, introduced by former Senator Phil Gramm (R-Texas), which imposed a lifetime ban on SNAP and Temporary Assistance for Needy Families for those convicted of state or federal felony drug crimes. Section 115 was debated on the floor for just two minutes—but for individuals with felony convictions, the implications can last a lifetime.

Section 115 embodied the prevailing perspective of the war on drugs, which is that strict punishments and policies were necessary to eradicate the illegal drug market. In retrospect, we now know that this outlook did more harm than good. It contributed to the opioid crisis and escalated mass incarceration. Although many drug offenses that once carried criminal penalties are today being decriminalized, many people still suffer collateral consequences from the harsh sentences they were dealt.

People understand a sentence is the direct consequence of a conviction. The collateral consequences that follow are less known or understood—from court fees and probation conditions to barriers to safe and secure housing, employment, and education. For people leaving prison, social support is crucial. One study found that 91 percent of formerly incarcerated participants reported being food insecure upon release—unsurprising given that three-quarters struggle to find work. The problem is worse among people of color; formerly incarcerated Black women have a staggering unemployment rate of 43.6 percent, followed by Black men at 35.2 percent. (Formerly incarcerated white women and men trail behind at 23.2 and 18.4 percent, respectively.) The impact trickles down, affecting children and families, becoming intergenerational and systemic.

A Patchwork of Policies

Fortunately, states have some discretion for administering their own SNAP programs. A welfare reform bill, the Personal Responsibility and Work Opportunity Reconciliation Act of 1996 (PRWORA), allows states to opt out of Section 115 if they pass legislation to do so; they can choose not to participate altogether, limit a person’s period of SNAP ineligibility, or narrow the population the rule applies to.

“People experiencing hunger are more likely to reoffend to support themselves and their families, worsening a systemic revolving door to prison.”

Since PRWORA was passed in 1996, 22 states plus Washington, D.C., have fully opted out of Section 115. Twenty-six states have modified it, expanding access to SNAP for more individuals with felony convictions. In addition to South Carolina, New York has no law addressing the ban, but it doesn’t appear to enforce it.

While it’s good news that most states have taken action to limit Section 115’s impact, modifications fall short. The most common modification, enacted in 15 states including Alabama, California, Connecticut, and Hawaii, requires that individuals complete a drug treatment program—yet studies indicate that less than one-fifth of Americans who need substance use disorder treatment are able to access it.

Another common modification, enacted in 11 states, requires that individuals comply with the terms of their probation or parole to access SNAP; six states—Alabama, Alaska, Arizona, California, Missouri, and Pennsylvania—enforce both restrictions. But these policies have it backwards; research shows that living in hunger or poverty limits an individual’s ability to comply with their parole or probation requirements. People experiencing hunger are more likely to reoffend to support themselves and their families, worsening a systemic revolving door to prison. And rearrest rates are disproportionately higher among those from historically marginalized populations—meaning the modification exacerbates racial disparities in access to SNAP. At the same time, research also shows that eligibility for financial and food assistance at the time of release from prison significantly reduces the risk of returning within one year by up to 10 percent.

A federal repeal of Section 115 is long overdue. President Biden’s American Families Plan—predecessor to the Build Back Better Act—originally included one. But with this type of sweeping legislation now a long shot in Congress, the next best solution is for states to opt out of Section 115, with explicit, durable laws codified into SNAP eligibility requirements. In addition to opting out, states should adopt policies that proactively provide social services and economic opportunities at the outset to help with reentry when people get out of prison.

Decades of research shows that the collateral consequences of felony drug convictions, including lack of access to nutrition assistance, make it much harder for people to reenter society and therefore contribute to systemic inequity. The impulse to restrict aid to those deemed “worthy” is a dark undercurrent of public assistance programs, twisting policies aimed to help into policies that punish. Let’s ensure that the people who have faced the most hurdles in our society have access to food at the moment when it could make the most difference in their lives.

Claire Child is assistant director of the Center for Agriculture and Food Systems at Vermont Law School. Her paper, “SNAP Judgments: Collateral Consequences of Felony Drug Convictions for Federal Food Assistance,” which she co-authored with Stephanie Clark, appeared in the Berkeley Journal of Criminal Law in January 2022. Read more >

Stephanie Clark is a Vermont Law School professor and director of the Center for Justice Reform and the National Center on Restorative Justice. Her paper, “SNAP Judgments: Collateral Consequences of Felony Drug Convictions for Federal Food Assistance,” which she co-authored with Claire Child, appeared in the Berkeley Journal of Criminal Law in January 2022. Read more >