Transitioning from foster care can leave young adults without the life skills or tools to fend for themselves. Advocates are proposing changes to keep them from going hungry. 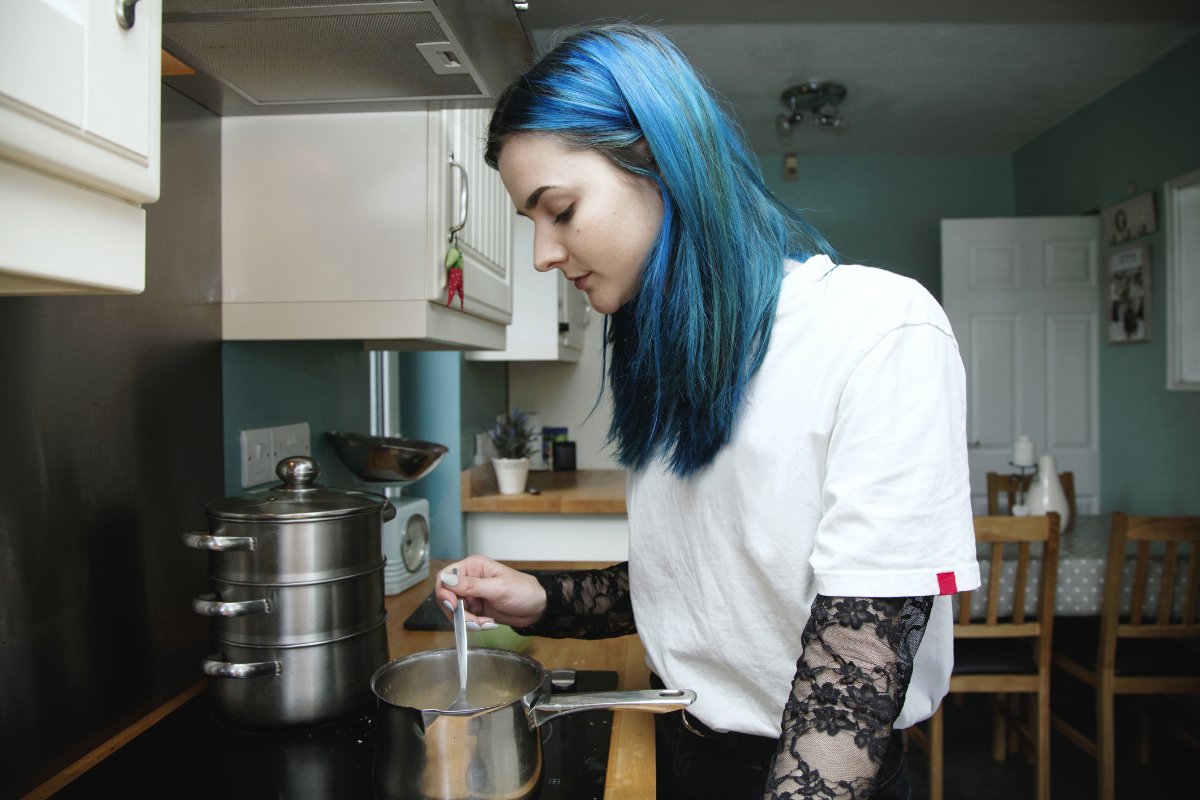 At the age of 7, Santos Amigon entered the foster care system in his home state of California. After stays with foster families didn’t work out, he spent most of the years until he turned 18 in group homes with other foster kids. Now 25, Amigon has been couch surfing for years and says being able to afford food, and knowing how to prepare it, prove to be continuous challenges—just two of the ways the foster system failed to prepare him for an independent life.

Even though he’s managed to earn income from warehouse jobs and sign up for CalFresh— California’s version of Supplemental Nutrition Assistance Program (SNAP) benefits—this is insufficient to feed him for a full month. On occasion, he has ordered hot food at a grocery store counter and stuffed it into his backpack. “I don’t like to steal,” he says. “But I know what it’s like to be hungry.”

Amigon is not alone. According to nonprofit National Foster Youth Institute (NFYI), where he is now an intern, 33 percent of surveyed former foster youth in California said they experienced food insecurity when they left the system. A report from the Center for the Study of Social Policy (CSSP) estimates that this number is potentially much higher nationwide; it found that 30 percent of former foster youth receive SNAP and other food assistance, but that as many as 71 percent might actually need it, based on Medicaid-funded program enrollments that indicate broader financial insecurity.

Some 23,000 adolescents in the U.S. transition out of the foster system every year. Whether they’re 18 when that happens—or a few years older in states with extended programs—they receive little education in caring for themselves as “grown-ups.” What they need, says Jacqueline Burbank, NYFI’s director of communications, are “training wheels so that when [they] have a setback or fail, they’re not just hitting rock bottom.”

The question is: What would that sort of safety provision look like?

The root cause of food insecurity is poverty. But poverty’s drivers and exacerbators can vary among populations; college students may find themselves food insecure after purchasing books and school supplies, while seniors can experience an income nosedive when they retire, leaving them short on grocery money.

Kids entering the foster system have likely started their lives in low-income Black, brown, or Indigenous households. Foster care doesn’t necessarily change their status; in fact, kids removed from their own family homes may be living with foster families (including so-called “kinship” caregivers like grandparents) whose incomes are below the federal poverty line and who are therefore vulnerable to food insecurity, too.

Because of all the challenges they face, youth who’ve spent time in foster care are more likely to experience homelessness, criminal justice involvement, low rates of timely high school and college graduation, and incomes below the poverty line. They are “disproportionately drawn from families living in poverty. And we typically stay in poverty,” says Burbank, who spent her childhood in kinship care. She considers herself fortunate that, upon aging out, she had access to CalFresh and a computer she could use to locate food pantries. And so the narrative comes full circle—from poverty, back to poverty and the ways in which it encourages and reinforces food insecurity.

The Elusive Home Base

There’s evidence to suggest that having a literal home base can mitigate against food insecurity. An adolescent who’s living in her car or sleeping on friends’ couches is in a poor position to shop for food or cook meals. The U.S. Department of Agriculture (USDA) issues waivers so states can allow SNAP recipients to buy hot food rather than groceries, but they tend to be sought after disasters and other emergencies and are temporary.

College, for those who find their way there, can provide some stability. But Mauriell Amechi, a senior policy analyst at New America and social scientist who researches educational pathways among former foster youth, points out that 6 in 10 foster kids matriculate in community colleges, which don’t usually provide housing. Even when they do, “housing instability is a very complex issue for these students,” Amechi says. The homes of former foster parents are no longer available to them to return to during holiday breaks, and lacking family support, “they don’t have anywhere to go, so they end up sleeping in their cars.” This became an all-too-common scenario when the pandemic began and closed down campuses in March 2020.

For former foster youth to succeed, Amechi says, colleges must “take a critical approach to serving all the needs of students beyond just providing instruction. We have to make sure students don’t have to [choose between] going to class or working their job in order to put food on the table.” That starts with identifying students with foster care backgrounds on their campuses—potentially as easy as adding a question to a student survey—then reaching out to make sure they’re receiving all the financial supports they’re qualified for.

“We have to make sure students don’t have to [choose between] going to class or working their job in order to put food on the table.”

Federally funded, state-administered Chafee Education and Training Vouchers, for example, give former foster youth $5,000 a year for five years to spend on post-secondary education, up to the age of 26. States may offer education monies of their own. For example, California’s Educational Opportunity Program offers financial and other supports, such as advising and mentoring, to disadvantaged students including those who have spent time in the foster system.

Also important is figuring out how to provide housing for students over holidays and summers. Even community colleges, Amechi says, could reach out to housing and residential life departments at nearby four-year colleges and say, “We have 25 students that need housing over winter break. Is there any way we can work with your institution to provide that?”

Some experts say that reducing food insecurity among former foster youth requires a similar approach to reducing it among any other population: namely, increasing the amount of monthly SNAP benefits to actually reflect what groceries cost, so recipients like Amigon don’t have to resort to more desperate approaches to feeding themselves.

However, there are some extra barriers to SNAP access experienced by former foster youth. One of the most significant is the Time Limit for Able-Bodied Adults Without Dependents (ABAWDs). Under this restriction, a single, healthy person between the ages of 18 and 49 who is not working at least 80 hours a month can only receive three months’ worth of SNAP benefits within a three-year period.

“This is a very harsh penalty for youth aging out of foster care,” write the authors of the CSSP report, noting that unemployment rates among this population run high; only three-fifths are employed by age 24, and their wages also tend to be much lower than others their age. Exacerbating the issue, the report notes, “Youth transitioning to adulthood can easily fall into a gap—supports . . . have traditionally ended at age 18, but many federal services and benefits for adults were designed for older individuals or parents.” The USDA granted ABAWD waivers to states during the pandemic; CSSP and other advocates would like to see former foster youth up to age 26 permanently exempted from ABAWD.

Offering youth who are about to age out mentorship that includes information on applying for SNAP and other benefits would also help them transition to independence. Amigon says he wishes he’d been connected with a professional with lived experience similar to his, “Somebody I can relate to who’s like, ‘Hey, I’ve been there, I know what it’s like, this is what worked for me, and this is what didn’t,’” he says. Burbank says adult foster youth who are aging out also need a caseworker to help ease them into independence.

Both Burbank and Amigon would like to see more attention given to setting up life skills programs that include teaching foster youth how to do things like feed themselves. “Someone should take you to the supermarket to show you how much food actually costs and not sugarcoat it. The reality is, it’s not always going to be three square meals a day,” says Amigon.

“We’re raising a generation that doesn’t know how to prepare meals because no one [in the system] teaches you how to cook.”

Erika Shira, a clinician in private practice who works with the Massachusetts Department of Children and Families and has also served as a foster parent, says this kind of skills-building doesn’t currently happen within the system at all “unless the foster parent is teaching it—and foster parents who kick kids out when they’re 18 are not the kind of people who are like, ‘I’m going to teach you to grocery shop.’”

Adds Burbank, “We’re raising a generation that doesn’t know how to prepare meals because no one [in the system] teaches you how to cook.”

“We’re taking their children from them because they’re poor, then placing them with other families, and giving those families financial assistance that still might not be enough to take care of these kids. It’s beyond ironic, and where does it end? Just give [parents] money.”

Shira likens the foster care system to “the proverbial town where people are jumping off a cliff, so they park an ambulance at the bottom of it.” Shira describes the U.S.’s approach to kids aging out of foster care as a “massive societal and policy flaw.” Much more beneficial, both Shira and Burbank argue, is for every state to offer extended care, which is currently available in only 26 states, plus Washington, D.C. Or, better still, starting way back at the beginning, would be to make much more concerted efforts to keep kids with their parents, or returning them as quickly as possible.

While reunification of parents and children is almost always the goal of foster care, certain unfortunate nuances exist. Burbank says the system offers training and support to parents struggling with mental health challenges and substance abuse. But some cases of “neglect,” such as lack of consistent meals or housing, “have to do with the family’s lack of resources to pay for those things,” she says. “We’re taking their children from them because they’re poor, then placing them with other families, and giving those families financial assistance that still might not be enough to take care of these kids. It’s beyond ironic, and where does it end? Just give [parents] money.”