‘Half of America’s farmers [are] under the thumb and control of John Deere.’

January 10, 2023 update: John Deere this week announced that it had signed a memorandum of understanding with the American Farm Bureau Federation to allow independent mechanics access to tools and software documentation to repair their equipment. In exchange, the Farm Bureau agreed to not advocate for any state or federal right-to-repair legislation—a caveat that has advocacy groups like PIRG calling for continued efforts to pass right-to-repair laws.

Update: On March 21, John Deere announced that it has made additional software available for farmers. However, farmers we spoke to said it costs around $4,000 and still doesn’t include a lot of what they would need to troubleshoot repairs.

Many U.S. farmers say they are locked into an increasingly costly, dependent relationship with John Deere, the $100 billion company that manufacturers about more than half the farm equipment in the U.S.

“To put that in perspective, that’s half of America’s farmers under the thumb and control of John Deere,” said Joe Maxwell, the co-founder of Farm Action and former Lieutenant Governor of Missouri, at a recent press conference. Yet farmers’ relationship with the corporation extends long after buying a tractor or combine—for the lifespan of their equipment when it inevitably needs repair.

Along with the equipment itself, John Deere controls the market for repairing that equipment, and in recent years it has actively prevented farmers and many independent dealers from diagnosing malfunctions or making many repairs. As we have previously reported, farmers and advocates have been increasingly calling for the “right to repair” their equipment as part of a larger movement that spans industries. They’ve often singled out John Deere’s restrictive practices.

Today, farmers and advocacy groups took their resistance a step further, filing a 40-page complaint with the Federal Trade Commission (FTC), asking federal regulators to take enforcement action and investigate John Deere for engaging in “unfair methods of competition and unfair and deceptive trade practices.” The National Farmers Union, along with local farmer unions in some of the largest agricultural states—Missouri, Nebraska, Montana, Wisconsin, and Iowa—are petitioners, alongside Farm Action and repair advocacy nonprofits.

“Hundreds of thousands of farmers cross our proverbial fingers that nothing breaks because we can’t fix it, and we know it’ll take the dealership days or even weeks to get us running again.”

“After the investigation, there are a number of steps FTC can take but the biggest one would be to issue an order requiring them to do essentially what state and federal ‘right to repair’ legislation would require them to do: Make freely available the necessary diagnostic codes and software to diagnose problems, fix issues, and pair replacement parts,” Jamie Crooks, the lead petition author and an attorney with Fairmark Partners, told Civil Eats.

The complaint is the first to be filed against John Deere in response to the FTC’s call last July for complaints about this issue—as part of the commission’s broader pledge to ramp up enforcement of restrictive repair practices. This came shortly after the Biden Administration’s sweeping executive order aimed at breaking up monopolies, including within agriculture, and ordering the FTC to initiate a rulemaking process to improve access to repair across manufacturing industries. (The FTC has yet to publicly initiate this process.)

“There are hundreds of thousands of farmers growing our food and every time we get into this equipment, we literally cross our proverbial fingers that nothing breaks because we can’t fix it, and we know it’ll take the dealership days or even weeks to get us running again,” said Jared Wilson, a Missouri farmer at the press conference. Wilson described how it took him 28 days to have his John Deere fertilizer spreader fixed, while begging the dealer to repair it.

If the petition is successful, it could potentially make a big difference for the many farmers, like Wilson, who say that John Deere’s restrictive policies cost them both money and time during harvest season, undercutting farm businesses across the country. “Over the past five years, I have collectively lost months of time during those important parts of the years. I have no doubt that has cost my farm hundreds of thousands of dollars,” said Wilson.

Along with farmers, the restrictive repairs also put dealers in a position of being dependent on John Deere, while driving out independent dealers as John Deere expands its ownership of dealers. Case in point: Walter Schweitzer, the president of the Montana Farmers Union, recalled how he once could easily get his equipment fixed at one of the three family-owned dealers within an hour from his ranch. Now, there’s only one option in town and the next closest is nearly four hours away. 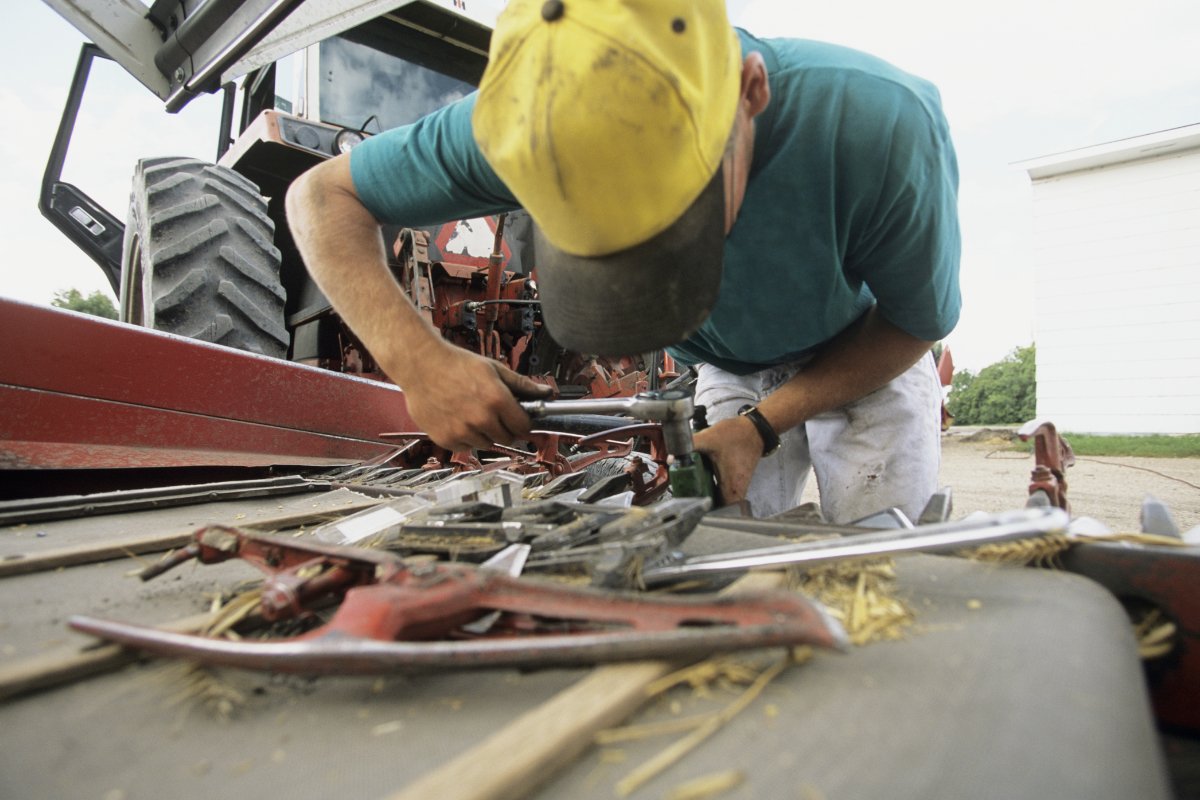 “The people that are managing and owning these dealerships are my friends. It’s not their fault. The equipment manufacturer is holding them hostage, too,” said Schweitzer, at the press conference.

John Deere’s dealership concentration is documented in a February report by U.S. PIRG, one of the petitioning organizations, which found that, “82 percent of Deere’s 1,357 agricultural equipment dealerships are a part of a large chain with seven or more locations,” which “further erodes farmers’ repair choices.”

If the FTC decides to investigate John Deere, then it would have the power to subpoena the company, accessing internal documents to understand the basis of its practices and licensing agreements that accompany its various high-tech machines. John Deere has maintained that the agreements are for the safety of farmers and environmental concerns. In a company statement last July 2021 it said, “When customers buy from John Deere, they own the equipment and can choose to personally maintain or repair the product.” It also maintained that less than 2 percent of all repairs require software updates, which means the majority of repairs farmers need to make, can be made themselves.”

Advocates say that the restrictive practices simply add to John Deere’s bottom line. “For the past several years, Deere’s margins on repairs have been three to six times more profitable than its margins on equipment,” said Crooks. “So, this is really a profit-driven decision. And we allege unfair method of competition under long standing very well-established Supreme Court and FTC precedent.”

Unlike the proposed legislation related to the broader “right to repair” movement, this order would only apply to John Deere.

In 2021, John Deere’s net profit margins reached a peak of 13 percent—as the upfront costs of farming continue to climb, requiring significantly steeper investments in both equipment and farmland.

The petition points to a Supreme Court case which determined that Kodak Cameras violated the Sherman Act, the nation’s oldest antitrust law, by making equipment that only Kodak could repair. “Our case is even a little bit stronger than Kodak because the company faced significant competition. It did not have a significant market power in the market for the copiers themselves,” said Crooks, in an interview.

Unlike the proposed rulemaking process and legislation on the table related to the broader “right to repair,” which would extend to a range of electronics makers, this order would only apply to John Deere. But the petitioners include many of the leading advocates and farmers in the broader movement, which has gained ground in recent years. They are also pushing for state and federal legislation, recently introduced by Senator Jon Tester (D-Montana). And they are supportive of a string of recent class-action lawsuits against John Deere for monopolizing repair services.

“There’s a realistic chance for this [petition] to lead to some timely relief for farmers,” said Kevin O’Reilly, director of the Right to Repair Campaign at U.S. PIRG.

Advocates and farmers intend to continue pushing across many avenues. “Every minute counts when it comes to raising your crop or bringing up livestock,” said O’Reilly. “We need to continue to push on all fronts until a solution is reached.”