As a National Seafood Council Takes Shape, Whose Interests Will It Serve? | Civil Eats 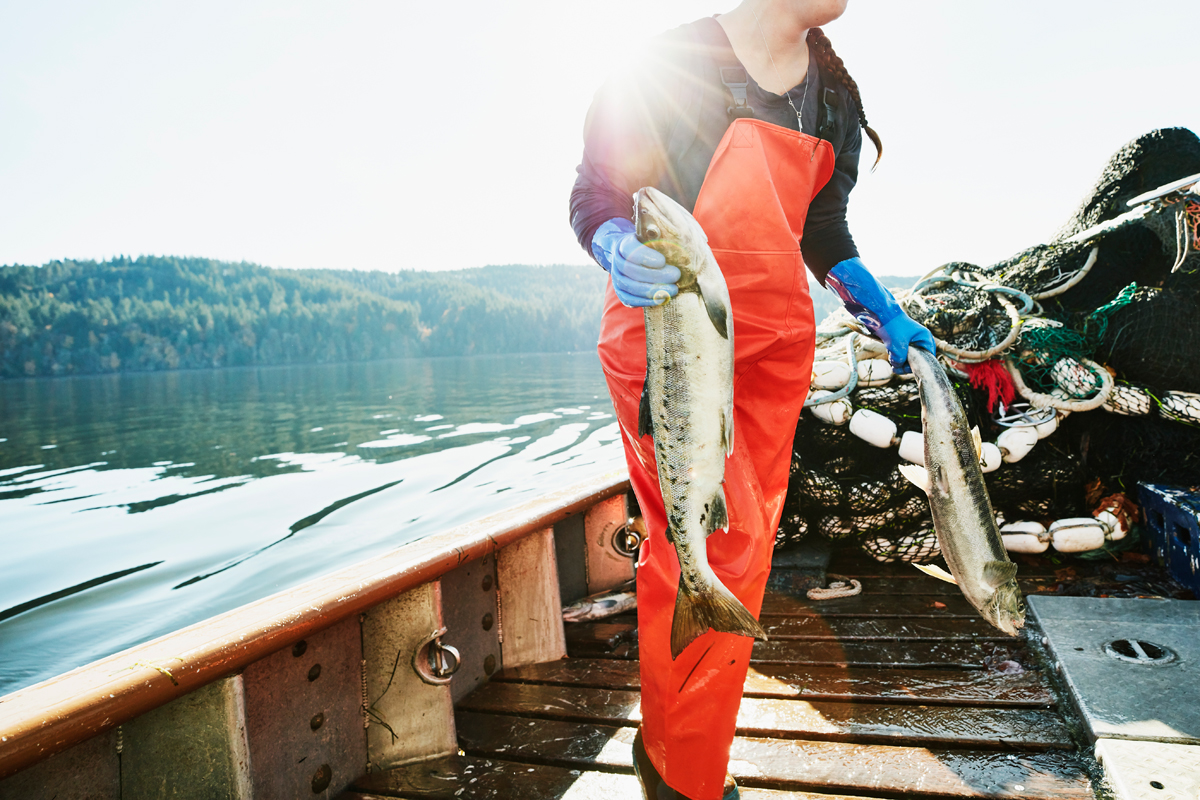 In 1993, the California Milk Processor Board approached a San Francisco advertising firm with a challenge: rev up the sales of milk, which for years had been on a slow, downhill slide. The board’s leadership hoped that a fresh ad campaign could rehabilitate milk’s image—boring, forgettable, mostly for kids—and had convinced its members to contribute 3 cents for every gallon they processed to fund one.

The result was a slogan to rival “Just Do It” and “Think Different”—“Got Milk?” The California campaign made such a big splash that it was eventually licensed by milk processors nationally as part of the National Dairy Research and Promotion program overseen by the U.S. Department of Agriculture (USDA). Glossy portraits of celebrities from Naomi Campbell to Bart Simpson sporting milk mustaches became iconic, up there with Friends and Doc Martens as totems of 1990s pop culture. And, in 1994, the slump was broken: Milk sales in California notched up by 2 percent.

Milk isn’t the only agricultural commodity to have benefitted from an outrageously successful marketing strategy. Witness beef (“Where’s the beef?”), pork (“The other white meat”), cotton (“The fabric of our lives”), California Raisins, and the “incredible, edible egg.” Commodity marketing programs tend to be surprisingly effective. According to the USDA’s Agricultural Marketing Service (AMS), which is tasked with helping farmers sell what they grow, every $1 spent on promoting the likes of avocados, pecans, or lamb can result in as much as $18 in additional sales for American producers. Today, AMS has an annual operating budget of $1.8 billion and oversees research and promotion boards, more commonly called “checkoff programs,” for 22 different agricultural commodities, from Christmas trees to peanuts.

Then there is American seafood, which has long languished in a kind of marketing dead zone. As a product of our waterways rather than our farms, seafood does not fall within the USDA’s purview, and therefore doesn’t benefit from that marketing machine. Fisheries are overseen by the National Oceanic and Atmospheric Administration (NOAA), which is best known for issuing weather forecasts. While some fisheries have clubbed together to burnish the image of a particular species—think Maine lobster, Gulf shrimp, Alaska wild salmon—American seafood has never had the benefit of a slick, big-budget, Got-Milk-style marketing effort.

Perhaps as a result, Americans consume just 19 pounds of seafood per capita per year, compared to 97 pounds of poultry and 59 pounds of beef. Trading some of that land food for seafood would be a positive change, not just for the livelihoods of American fishermen, but because of the health benefits of eating fish and its relatively slim carbon footprint.

Now, though, a glimmer of hope may be on the horizon for U.S. fisheries, as an effort to stand up a National Seafood Council tasked with marketing all those fine finned foods is at long last underway. But who ends up controlling such a council—and what seafood gets plugged on your social media feed—could have a major impact on which segments of the global seafood industry stand to benefit.

When it comes to American buying habits, U.S. fisheries could use a helping hand. Almost 90 percent of the fish and shellfish we eat in this country is imported, despite the fact that the U.S. controls more ocean than any nation on Earth. This is partly because seafood caught in the U.S. is often processed overseas, where it becomes indistinguishable from imported seafood. And imported seafood—sometimes caught in ways that violate human rights or deplete wild populations, or raised on polluting fish farms—is usually far cheaper than what we catch in the U.S., where fish populations are stringently managed and slave ships can’t operate.

Inexpensive imports undercut the price that American fisherman must charge in order to fish ethically and legally, and still make a living. Market dynamics that favor corporations and the globalization of seafood worsen these issues and have been putting small-scale fishermen out of business in the same way that Big Ag has supplanted a small farm economy.

So, in 2018, NOAA’s Marine Fisheries Advisory Committee (MAFAC) set out to study what the government could do to help encourage consumers to buy more American seafood. The group issued a report in July 2020 laying out its recommendations: NOAA should take the lead on creating a National Seafood Council, financed with government funds, to pay for research, education, and marketing to benefit U.S. seafood.

It’s tough to get the seafood industry—a diverse collection of dayboat fishermen, industrial fishing fleets, importers, processors, distributors, wholesalers, and multinational conglomerates—to agree on much of anything, but MAFAC’s recommendations were met with broad support. “We feel this is needed to benefit small- and medium-scale fisheries, but the big folks want it, too,” said Brett Tolley, national program coordinator at the Northwest Atlantic Marine Alliance (NAMA), which advocates for the interests of community-based fisheries. “It’s a huge need, and we’ve been flagging it for a while.”

And yet, by the summer of 2021, a year after MAFAC first issued its report, NOAA still hadn’t taken the bait. Industry groups were growing restless; Linda Cornish, the president and founder of Seafood Nutrition Partnership (SNP), a nonprofit that raises awareness about the nutritional benefits of seafood, was particularly eager to get the show on the road. The SNP’s donor list includes companies like Bumble Bee Seafoods, StarKist, and Gorton’s—a who’s who of Big Seafood with vested interest in encouraging Americans to eat more fish.

The organization had recently launched its own small but effective digital marketing campaign (“Eat Seafood, America!”), and wondered if a National Seafood Council could be the ticket to taking that message mainstream. “We didn’t want the report to sit on a shelf, or to take a while to get it going,” Cornish said. “So, we began plans to see if we could incubate a National Seafood Council task force to nudge the process along.”

Last September, Cornish and the SNP assembled a group of 30 seafood industry players—at least 18 of which are SNP donors—and convened them for a meeting at its offices in Arlington, Virginia, to revive progress toward National Seafood Council. In December 2021, the task force issued a report with one conspicuous difference from MAFAC’s original recommendations: the focus on promoting domestic seafood had been dropped.

‘The People Who Fish Really Matter’

The Seafood Nutrition Partnership has a single stated goal: to get Americans eating more seafood, of any kind, by promoting its health benefits. When it comes to marketing seafood, Cornish’s view is that the seafood industry’s mistake has been to make buying fish too confusing for the consumer. On top of all the different species to choose from, there are sustainability ratings and information about where and how it was caught. Shoppers become overwhelmed, give up, and head for the meat case.

“Our focus is to help consumers get to the seafood section of the supermarket, and once they’re there, all the other campaigns still need to tell their story about the seafood they’re bringing to the table,” Cornish said. “We’re the front line of helping consumers get into the category, so that’s why we’re focused on the whole seafood category.” For Cornish, any qualifier—local, sustainable, line-caught, domestic—detracts from the goal of increasing seafood consumption. It’s worth noting that many of SNP’s largest donors—CenSea, Cooke Seafood, Trident Seafoods, High Liner Foods, and others—sell imported fish, so a message that promotes domestic seafood would run counter to their interests.

Supporters of small-scale, community fisheries are quick to point out that, in the absence of messaging that explains the value of American-caught seafood, the average consumer is very likely to respond to an ad encouraging them to eat more seafood by eating larger quantities of cheap, imported seafood, playing right into the hands of predatory Chinese fleets, at the expense of America’s struggling fishing communities.

“When you’re looking at it through the eyes of the budget-strapped consumer, it’s really hard to find good, wild American fish for less than $10 per pound,” said Paul Greenberg, the author of three best-selling books on seafood and the host of the podcast Fish Talk. “When you compare it to chicken, how can you compete?”

Wired this way, advocates for small-scale fishing say the campaign won’t support American fishers or fishing communities in the way it first sought to. And those communities—from cod towns like Gloucester, Massachusetts, to crabbing strongholds like Kodiak, Alaska—struggle to remain vital as an increasing share of the fishing economy is captured by corporations.

For the time being, the debate is hypothetical; the National Seafood Council is not yet a reality, and the task force’s next major challenge will be to secure funding. Erika Feller, the Americas regional director for the Marine Stewardship Council and a former chair of MAFAC, says that she’s supportive of SNP’s leadership, but that it’s likely that government participation and buy-in—both in terms of funding and oversight—will be needed to get it off the ground. (The task force meeting was attended by two NOAA Fisheries representatives, but the agency did not respond to requests for comment.)

“One of the things that comes up in the MAFAC report is that the U.S. seafood industry is really diverse,” said Feller, who also attended the National Seafood Council task force meeting. “Given such a diverse industry, whatever goes forward will have to be a partnership between government and key industry players.”

The question of who controls the promotion for the seafood industry may also have wider implications, as there has often been a slippery slope between promotion and lobbying. Or as author Marion Nestle put it, “Some of the [checkoff] boards are so closely affiliated with lobbying groups that they share office space.” They have also on occasion been known to share the same finances—as was the case in 2010, when an audit revealed that the Cattleman’s Beef Board had spent promotion dollars to fund the work of the National Cattleman’s Beef Association, the arm that lobbies congress on everything from the National Dietary Guidelines to the farm bill.

For all these reasons, Brett Tolley, of NAMA, argues that “key industry players” involved in the task force must include truly small-scale fishing interests, which he says are not sufficiently represented on SNP’s task force. This includes people who still fish off the shores of America in their own vessels, who clean and ice their own catch, and who haul it to shore and sell it directly to consumers and restaurants or small distributors, without a web of corporate actors in between. And, at a bare minimum, Tolley insists, a National Seafood Council should promote only U.S. seafood, in line with MAFAC’s recommendations.

“The people who fish really matter, and they matter for the sake of our marine ecosystem and for our local and regional economies,” Tolley said. “Simple and sustainable supply chains matter. Thinking about seasonality matters. Paying a fair price matters. Community-based approaches to managing the fish matter. And the current direction of the National Seafood Council task force is invisibilizing all of those values.”

Elizabeth G. Dunn is a New York City-based journalist who reports at the intersection of food, business, ecology, and culture for publications including The Wall Street Journal, Bloomberg Businessweek, The New York Times, and The New Yorker. Read more >