The latest IPCC climate report notes that rapid, transformational change to food systems is necessary and possible, but countries are not doing enough—yet. 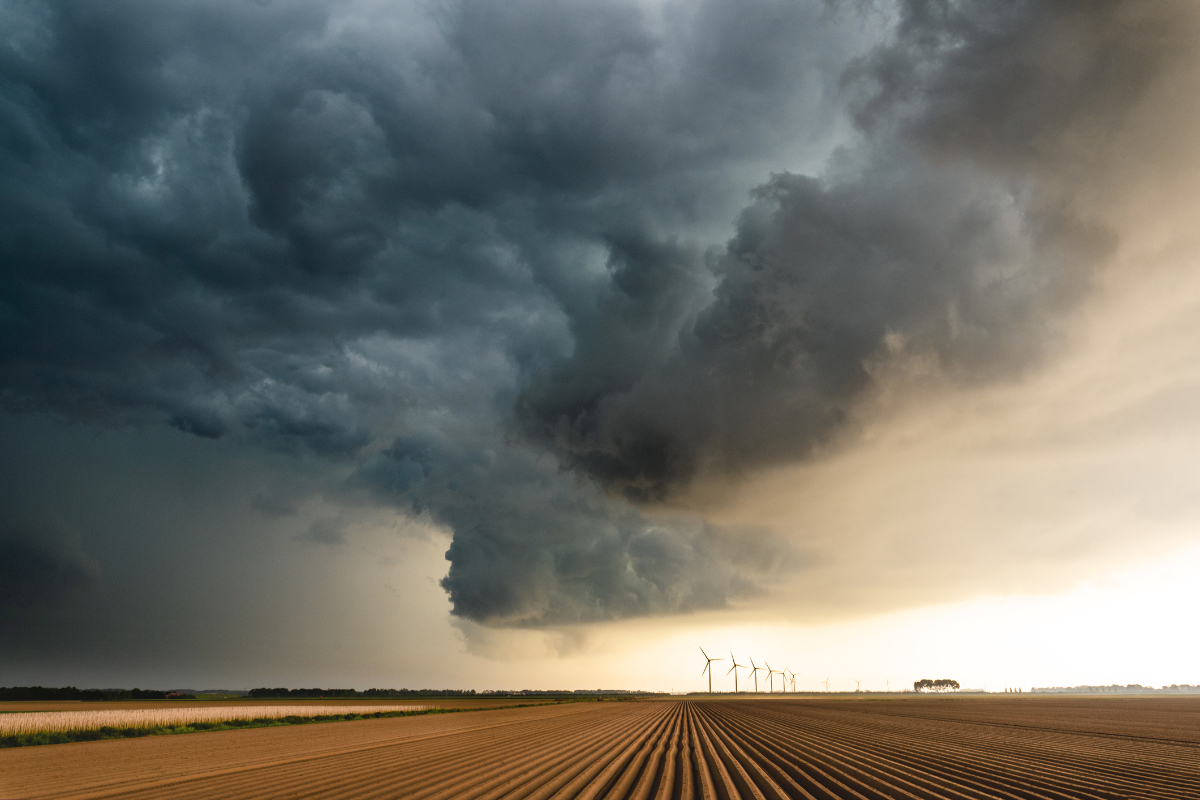 Welcome to The Field Report, our weekly roundup of easy-to-digest stories. Each week, we’ll provide you with the perspective, analysis, and context you need to make sense of the most important food system news coming out of Washington, D.C. and around the country. Email lisa@civileats.com with tips.

The latest extensive report from the world’s top climate scientists confirms what many of us have observed in recent years: climate change is already disrupting the world’s supply of food and water more significantly than previously thought, and those disruptions will get worse. While the majority of countries are not doing enough to adapt and build resilience, experts say solutions within agriculture and the broader food system have real potential to both mitigate the crisis and benefit people and the planet in other ways—if implemented quickly and decisively.

The Intergovernmental Panel on Climate Change (IPCC) report is the latest installment in a series split between three working groups. The first report, released last August, focused on the most up-to-date physical science on climate change, including the rate of warming; U.N. Secretary-General António Guterres called it “a code red for humanity.” The one released today focused on the scale and nature of threats to the planet’s landscape and people. In April, a third report will cover how much progress has been made to reduce greenhouse gas emissions and opportunities for accelerating those reductions.

Overall, the scientists behind the new report found that “the extent and magnitude” of the impacts are larger than the IPCC had previously determined and that they touch all aspects of life on Earth, from diminishing kelp forests to irreversible permafrost thaw to a growing mental health crisis.

Impacts on food and water were front and center. “Overall, the picture is stark for food systems. No one is left unaffected by climate change,” said Rachel Bezner Kerr, a professor at Cornell College of Agriculture and Life Sciences who was the lead author on the report’s food chapter. “At the same time, we find that every increased amount of warming will increase the risk of severe impacts. So, the more rapid we can take strong action to reduce greenhouse gas emissions, the less severe the impacts will be.”

That’s because there’s a pile-on effect, and various risks are compounding each other over time.

If countries fail to keep temperature rise within the 1.5°C range, crop losses due to droughts, flooding, and other extreme weather events will increase, along with food safety risks from food- and waterborne diseases, including zoonotic diseases that can be passed between animals and humans. (Two current disease threats the world is facing—COVID-19 and avian influenza—are zoonotic.)

Over time, global warming will also progressively make it harder for farmers to grow food, as water becomes more scarce and natural processes get disrupted, affecting soil health, pollination, and threats from pests.

While some impacts like sea level rise and extinctions are already irreversible, the report authors emphasized that “near-term actions that limit global warming to close to 1.5°C would substantially reduce projected losses and damages.” (Last week in a Washington Post op-ed, climate scientists also argued that despite old models that showed warming would continue for several decades after carbon emissions stop, new science suggests swift action could actually halt temperature rise within three to five years.)

And in the food system, Bezner Kerr said she and her colleagues found “a rich, extensive literature” on solutions.

The key is acting within “a brief and rapidly closing window” and avoiding what the report calls “maladaptive” responses that provide short-term solutions to the effects of warming while decreasing biodiversity and resilience, reinforcing inequities, and preventing investment in more transformational action. That point is particularly relevant to current policy considerations, since within the food system, many experts and activists have been sounding the alarm on “false climate solutions” that they’d likely say fit that criteria, from biogas subsidies that incentivize increased industrial meat production to carbon markets that lock in chemical-intensive, monoculture crop production.

More than any IPCC report that has come before, the experts emphasized that action taken to adapt would not be effective unless it considered the overlapping interactions between climate, biodiversity in ecosystems, and the health and well-being of people. Food sits at the nexus of all three, with production potentially producing emissions and absorbing carbon, agriculture driving extensive land and water use, and the world’s population dependent on its nutrients. The report also emphasized a need to include Indigenous knowledge and solutions.

Bezner Kerr said the approaches that stood out in terms of their potential to really move the needle—including agroecology, agroforestry, and more agricultural diversification—were designed to work with natural processes to both safeguard resilient ecosystems and support food security, nutrition, and livelihoods.

“This is one of the overarching messages of our assessment—that risks to people can be reduced and biodiversity improved by working with nature,” she said.

Meanwhile, in Washington . . . the U.S. Department of Agriculture (USDA) held its annual Agricultural Outlook Forum, with climate-smart farming dominating the conference’s agenda. “The game used to be . . . about production,” Secretary of Agriculture Tom Vilsack said in his initial address. “The market was sending the message to producers in the United States that production was valued, and farmers in America responded [with]…extraordinary increases in production. The game is changing though: It’s not just production. It’s also sustainability, and we need to be in a position to lead that change.” Vilsack talked about USDA’s recent investment in developing climate-smart commodities and prioritizing climate-smart practices within conservation programs.

But many of the other efforts he highlighted are controversial for their emphasis on small changes that many experts believe maintain the status quo instead of reaching for the kind of transformational changes the IPCC report pointed out are necessary. For example, he talked about his industry-aligned AIM for Climate program, ecosystem markets, and increased support for biofuels. Other sessions at the conference addressed climate in the context of market opportunities such as feed additives for livestock and methane digesters on dairy farms, crop insurance, more resilient local and regional food systems, and “climate-smart innovations” including indoor vertical farming and agrivoltaic systems that combine food and solar production on the same land.

All told, after two days sitting in on this event followed by a weekend enmeshed in the IPCC findings, it seemed clear that despite some meaningful investments and progress, the USDA is not moving nearly as fast as the IPCC report suggests is necessary—or considering many solutions that rise to the level of “transformational.”

Climate in California. News out of the country’s largest agriculture state also supported multiple conclusions made in the IPCC report. Due to a devastating ongoing drought, federal officials who control one local water system said that they will not allocate any irrigation water to farmers in the Central Valley this year. That decision will undoubtedly mean farmers will plant fewer crops in the region, which produces the majority of the fruits, vegetables, and nuts sold in the U.S. A new report prepared by the state’s Department of Food and Agriculture found that in 2021 alone, the drought led to $1.2 billion in costs and lost revenue and 8,750 lost jobs. And at the University of California, Davis, researchers published a study that found while farmers are often pressured to remove trees and bushes that attract birds to their farms due to food safety risks, conserving biodiversity (i.e., leaving more trees and hedgerows) around strawberry fields can actually reduce food safety risks and decrease crop damage, while supporting important ecosystems.

Down with Deforestation. Food-and-climate activists celebrated a victory when a powerful international investment bank decided not to move forward with loaning $43 million to Marfrig Global Foods, a Brazilian beef company. The loan was intended to support the company’s sustainability plans, but more than 280 activist groups opposed the funding due to Marfrig’s links to ongoing deforestation and Indigenous land grabbing in South America. “We hope the IDB Invest’s decision to drop the Marfrig loan sends a loud signal to other banks: Animal agribusiness investments are incompatible with commitments to reduce emissions and align their lending with the Paris Climate Agreement,” Kari Hamerschlag, deputy director of food and agriculture at Friends of the Earth U.S, said in a press release.

Read More:
Can an Industrial-Scale Meat Company Be Carbon Neutral?
The Food System’s Carbon Footprint Has Been Vastly Underestimated