Can an Illinois Bill Counteract the Decline of Black Farmers? | Civil Eats

Can an Illinois Bill Counteract the Decline of Black Farmers? 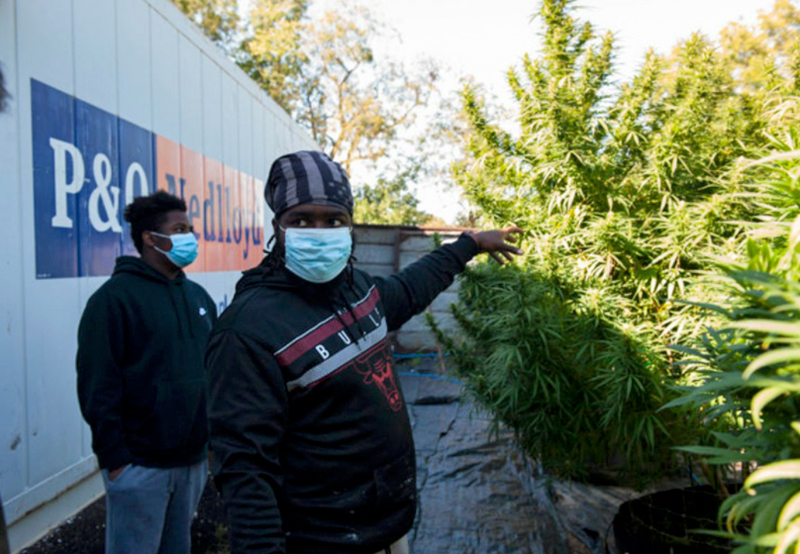 Included in a letter denying financial support from an agency of the U.S. Department of Agriculture (USDA), they showed his four-acre farm plot in Galesburg, Illinois. But he hadn’t been there when they’d been taken. The USDA agent had visited his property without him, he said, and then denied his application.

“Why would she do this and why would she just deny me without even talking to me?” asked Medley, 36, the owner of Greenlords Inc. “I started feeling they discriminated against me for whatever reason.”

The USDA has a history of discriminating against Black farmers like Medley, according to government reports, and their number has dwindled over the past century as they’ve lost their land.

But a bill in the Illinois General Assembly—which mirrors efforts in Congress and other states—seeks to redress racial disparities in farming in the state. The Black Farmer Restoration Program Act aims to support producers by, in part, granting Black producers farmland.

“When you take a look at what Black farmers have gone through throughout history, when you take a look at the issue that they had around land access and even access to federal programs, you will see that there has been a big disparity there,” said state Rep. Sonya Harper, a Chicago Democrat who introduced the bill last year. “While we’re in the time of recognizing disparities in the time of COVID, we can also note that there are also disparities in the agriculture industry.”

For decades, Black farmers have accused the federal government of unfair treatment when they apply for farm loans and assistance. The USDA in 1997 reached a settlement with Black farmers in a class action lawsuit—known as the Pigford case—accusing the department of denying them funds due to discrimination.

In recent years, too, the USDA has denied loans to farmers of color, especially Black farmers, at a higher clip than they’ve denied loans to white farmers, according to a recent CNN analysis of government data. CNN found the rejections increased in former President Donald Trump’s last year and the first year of President Joe Biden’s administration.

Harper’s bill “helps to address the historic discrimination and an unfair advantage that other groups of farmers have had over Black farmers,” said Kathleen Mueller, senior policy organizer at the Illinois Stewardship Alliance, an advocacy group supporting the legislation.

The bill calls for the Illinois Department of Agriculture to create a fund to purchase farmland and offer land grants of up to 100 acres to eligible individuals, prioritizing “socially disadvantaged farmers” and applicants “with a family history of land dispossession.” It would also establish a Farm Conservation Corps to provide training to Illinois residents between 18 and 29 years of age from socially disadvantaged groups to pursue careers in agriculture.

At an early February listening session on Harper’s bill, Medley and other Black farmers shared hurdles they’d experienced about land access and loan applications. But one influential group didn’t attend.

Like in many states, the Illinois Farm Bureau is seen as a voice of farmers and a powerful lobbying group for agricultural issues. But it hasn’t taken a public position on Harper’s bill.

“In regard to the bill itself, we are currently reading through the language,” Casali said in an email.

In January, representatives of state farm bureaus, including Illinois, convened to vote on the national organization’s political positions for the year. Most pertain directly to farms, but some illustrate the group’s collective stance on racial issues.

The American Farm Bureau Federation—the umbrella organization state farm bureaus belong to—opposes “any program which tends to separate, isolate, segregate or divide the people of our country under the guise of emphasizing ethnic diversity,” the 2022 Policy Book states.

It also opposes expanding remedies for victims of civil right violations, the use of quotas meant to diversify hiring practices, and the distribution of federal aid based on race, gender, or religious belief.

Asked if the policy book’s language conflicted with the goal of Harper’s bill, the Illinois Farm Bureau did not answer directly.

“We anticipate there will be several different versions and changes coming in the coming spring session on this bill,” spokeswoman DeAnne Bloomberg said in an email. “We appreciate the open door that Rep. Harper has shown in explaining her visions on this bill, and we also thank her for the commitment in committee to include us and the Illinois Department of Agriculture in her development of the bill.”

The bill was voted out of committee Feb. 10.

Medley applied in 2019 to a program from the USDA’s Natural Resources Conservation Service, which aims to help farmers develop environmentally friendly practices. He wanted financial assistance to build a high tunnel, a hoop structure that protects plants from severe weather.

But it wasn’t a smooth process. He arrived at his appointment to go over his application, and, when he was about to enter the agency employee’s office, he overheard him on the phone.

“He was talking about me,” Medley remembered, “saying he was going to give me a hard time.”

Buck, the spokeswoman for the NRCS’s Illinois office, said she couldn’t comment on the incident. She said she hopes Medley reaches out to “see if we can help him out.”

The application process dragged on for several months. Later, a different NRCS agent scheduled a time to visit his aquaponics and hemp operation, but Medley contracted COVID-19. He couldn’t make it.

In January 2021, he received the letter denying the financial aid. When he emailed the agent asking what happened, she apologized for “dropping in,” according to the emails. She told him she was out “doing investigation” and had time to stop by.

He had better luck with a different USDA agency, the Farm Service Agency, which is in charge of most government payments to farmers. He successfully received one of its loans around 2019, he said.

Harper described her bill as part of “a nationwide effort to help Black farmers.”

Lawmakers in states such as North Carolina and South Carolina have presented similar legislation, and a federal bill introduced by Sen. Cory Booker, D-N.J., aims to provide debt relief and create a land grant program for Black producers.

Land access is one challenge faced by urban farmer Natasha Nicholes, who runs We Sow We Grow in Chicago’s West Pullman neighborhood.

Nicholes, 41, started growing produce on a lot across the street from her home after receiving the OK from the community’s alderman. She’s hoping to acquire the land in the future through her nonprofit, but the process “is insanely long,” she said.

“Just being able to get a plot sometimes changes the course of a neighborhood fully because you can grow enough food to be able to support 100 or more families in that one acre,” Nicholes said.

Last year, the USDA announced debt relief payments to “socially disadvantaged” farmers or ranchers—defined as Black, Hispanic or Latino, Asian, Native Indian or Native Alaskan and Hawaiian or Pacific Islander producers—in an effort to mend historic discrimination. The money was part of the American Rescue Plan Act, passed by Congress in March 2021, and estimated to be worth about $4 billion.

But white farmers across the country sued to prevent the payments from going out.

“I was eligible to have my loan forgiven,” Medley said, referring to his FSA loan. “I signed the paperwork, I sent it in. I was excited. Then, they blocked it.”

White farmers are challenging the debt relief program in court, arguing the program discriminates against them on the basis of race. Harper said she expects some push back on the bill based on the same arguments.

Medley hopes the Black Farmer Restoration Program Act will be passed. Although, he noted, this isn’t the first time the government has made promises to Black producers.

“I don’t want to put too much hope in the government,” he said. “I just kind of depend on myself like I’ve been doing to try to get by, but I’m hopeful.”

“The community of Black farmers is going to shrink ‘til it’s nothing,” he said. “This bill could help usher in a new generation of African American farmers. But, if it fails, it’s gonna continue to dwindle.”

Madison McVan contributed to this story.

Amanda Pérez Pintado is a corps member with Report for America, a national service program that places journalists into local newsrooms. Read more >