Op-ed: What I Learned from White Oak Pastures—and What Other Farms Can, Too | Civil Eats

Op-ed: What I Learned from White Oak Pastures—and What Other Farms Can, Too

I saw first-hand the difference intentional, human-powered farming can make for the land—and for the vibrancy of rural communities. 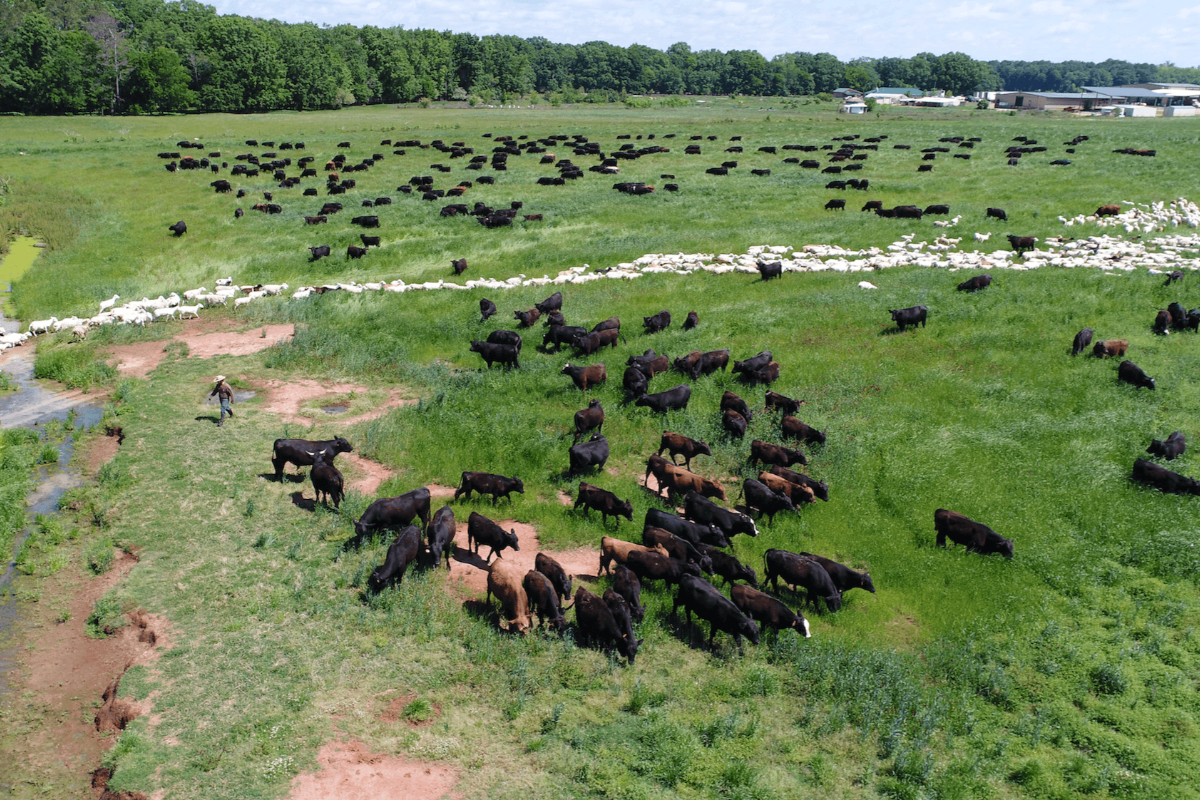 I got my butt whooped playing corn hole at White Oak Pastures. It wasn’t the quick beating that made the game memorable. That could happen anywhere. It was the fact that I was standing in the street in Bluffton, Georgia, a town of 113 people, drinking beer and playing in an organized tournament with at least 20 people.

My husband John and I moved from San Francisco to Iowa in 2019 to take over his family’s fifth-generation, 540-acre farm, raising cattle and goats on pasture through rotational grazing. What drew us to Southern Georgia was a four-day retreat with the Center for Agricultural Resilience (CFAR), an offshoot of White Oak Pastures (WOP), a large farm known for its commitment to regenerative agriculture. About eight attendees—including a few professors, a tech employee, a veteran-turned-farmer, a U.S. Department of Agriculture (USDA) employee, an organic pesticide salesman, and my cattle-rancher husband and I—toured every part of the operation, from the fields to the kill floor, and listened to talks by those at the forefront of the business as well as those in the farthest back office.

The goal of the $2,000 event (which my husband and I attended as guests of the farm) was to talk at length about the endeavor—about the financial, ecological, and social successes and challenges White Oak has experienced over its 30 years—and to give attendees a peek into the business decisions that have made the farm what it is today.

After generations of growing corn, cotton, and peanuts and raising cattle on the land in a “centralized, commoditized, and industrialized” fashion, said Will Harris, the owner of White Oak Pastures, “we spent 25 years figuring out how to make a successful exit. We learned a lot.”

Harris and his family transitioned the farm to a more environmentally sound and resilient system slowly and often haphazardly, they told us. The 3,000-acre operation—while certainly not perfect (and not claiming to be)—is today home to more than 30,000 animals, including cows, sheep, rabbits, and ducks who graze and browse on the farm’s heavily managed fields. Progress in improving the land is monitored using the Savory Institute’s Ecological Outcome Verification system, and the farm has worked with researchers to determine how much carbon, if any, is being captured by their system. 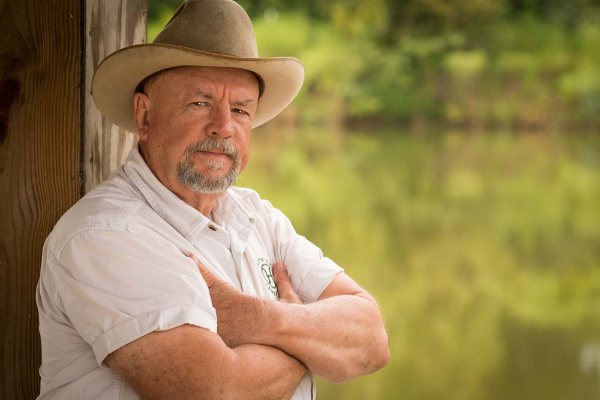 But the farm also took on large financial risks to capitalize on the business opportunities it felt were available to them. WOP built its own multi-million-dollar slaughter facility and manufacturing areas to utilize every part of the animal. Some hides are tanned (off-site) and made into wallets at WOP, while others are dried into dog chews. Tallow is repurposed into lines of branded lotion and foaming hand soap, and the farm runs a store on site to sell its wares. The farm also serves breakfast, lunch, and dinner daily at its own restaurant (largely made with their own meat and vegetables), runs an e-commerce site, holds events, and rents cabins.

The business model at White Oak Pastures has morphed over the years, from one highly dependent upon grocery store orders to today’s emphasis on direct-to-consumer sales. Because of the remoteness of the farm, the company had to find outside places to sell their products, delivering to Whole Food Markets and Krogers around the Southeast. Now, WOP has shifted its focus to marketing and shipping orders to people around the country as a way to cut out the middleman.

Our days at the farm were overwhelming at times. After visiting the processing facility and the order fulfillment center where WOP employees pick and package products, it was clear to us that a smaller farm like ours would never be able to accomplish a fraction of what they have over the years. My husband and I would never have the time or money to invest in a business as WOP did, and both of us are too risk adverse to take on the kind of debt Will Harris did to grow his farm.

But by the last day, our attitudes had shifted. Instead of comparing our operation to WOP, we saw the components of their business that we could grow on our own. White Oak Pastures had made decisions based on their priorities, skills, and focus: We could do the same. CFAR was not a “do-it-like-us” course; WOP gave us insight into what regenerative agriculture could look like on the ground and a menu of ideas to pick from. The staff modeled true transparency in the food chain—an honest sharing about a company’s challenges and successes, including a close look at exactly how their soil is improving and a rundown of the challenges of processing and marketing enough poultry to make a separate facility worthwhile.

“Most farms have $3 million in equipment and three employees. We [at White Oak Pastures] have 164 people, and $10 of equipment.”

Yet, even more importantly, I realized while at WOP that “regenerative agriculture” requires generations; there can be no lasting change in agriculture without people to take over and to carry on the improvements we have made. While Will Harris focused on improving the soil and the lives of his animals in his 30-year transition of the farm, he also inadvertently created jobs and invested in his community. Not long ago, the only thing you could buy in Bluffton was a stamp at the post office. Now, the town is actually increasing in size (and holding corn hole tournaments) in a place that was long ago rendered inconsequential by the conventional agricultural system.

“Most farms have $3 million in equipment and three employees,” WOP’s director of operations, Brian Sapp, told us. “We have 164 people, and $10 of equipment.”

While that is clearly an exaggeration—the processing plant alone at WOP is worth several million dollars—the point was not lost on us. A new John Deere combine to harvest corn can run a farmer $500,000, in addition to the cost of the seeds, sprays pesticides, and semi-trucks to get the product to market. At WOP, the Harrises made that same kind of investment, but it was into a system that kept people at the core of the business—using humans to move cattle, process meat, cook and serve food from the farm, and even design wallets and backpacks.

Managers at WOP spoke of a commitment to the farm in ways I had never heard farmworkers speak about their job; they used the word “family” and referred to the farm as a place where they are allowed to make mistakes and take ownership of their work, be it in the garden, the pasture, or the pack house. “We all know that people will show up when you need help with your herd,” said Briget Hogan, the farm sheep manager. “To me, that is true resiliency.”

Many farmers around the world are convinced that our practices need to be more aligned with the needs of the planet and that working with nature—instead of using chemicals, machines, and seeds to battle against it—makes for healthier animals and land. You would also be hard pressed to find anyone in the U.S. who feels rural towns should go the way of the dodo; to many, they are the heart of the American Dream. But perhaps many of us have completely overlooked the power of job creation in agriculture—particularly sustainable agriculture that relies on humans to make a farm run—to revitalize our emptying rural communities. Putting as much food on people’s plates as cheaply as possible should not be our only goal in agriculture. It should be to nourish our nation along with the rural communities that grow it.

The community created by WOP is by no means perfect. While there are many Black employees at the company, there is a clear issue in the lack of managers of color at White Oak Pastures. And as CFAR participants, we also interacted mainly with those in management, giving us little understanding as to what an average employee at the farm feels about their position or the operation as a whole.

But as I stood in the street, throwing bean bags everywhere but in the corn hole and chatting with 20- and 30-somethings from around the country who have flocked to this tiny town in the middle of nowhere, I couldn’t help hope our own farm will be able to build a fraction of the community what WOP has. They have created true livelihoods in a place where none existed.

Beth Hoffman is an Iowa-based farmer and former journalist. She has reported on food and agriculture for NPR, The World, Latino USA, Living on Earth, and many others. She is the author of Bet the Farm: The Dollars and Sense of Growing Food in America, (Island Press, 2021). Read more >