Op-ed: The New York Times Took on the Food System. Here’s What They Missed. | Civil Eats

Op-ed: The New York Times Took on the Food System. Here’s What They Missed.

A trio of new videos offered a rare attempt to call out agribusiness and the factory farm system of meat and dairy production—but rural and farm voices working outside Big Ag were left unheard.

By Sophia Murphy and Ben Lilliston 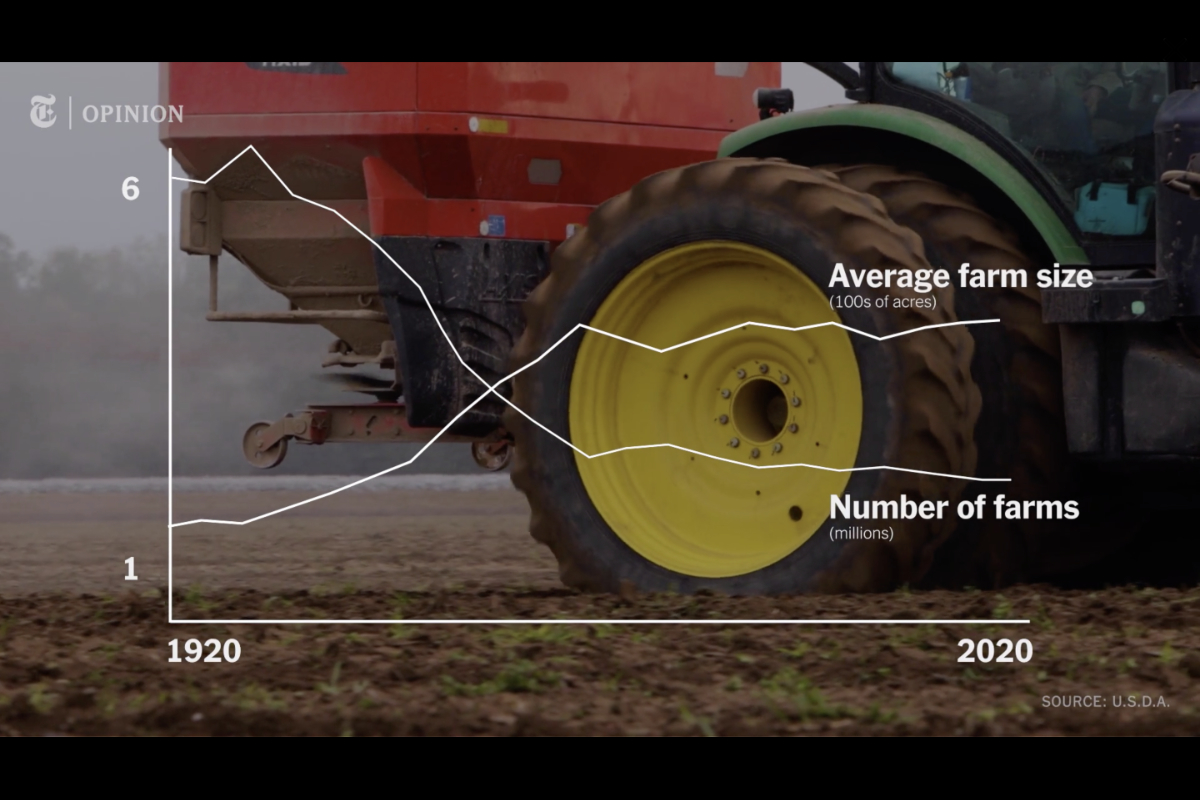 This week, The New York Times released the third in a series of provocative opinion videos called “We’re Cooked” that focus on “our broken food system,” with the idea that “you get three chances to help fix it—and save the planet—every day.” The videos make a rare attempt to call out agribusiness and the factory farm system of meat and dairy production from which the industry profits for a general U.S. audience and try to capture the attention of today’s online readers with polished visuals, gruesome insider footage, and expert testimony.

First off: Amen. The current food system is responsible for enormous harms, from inhumane treatment of animals and people to gross pollution of water and air quality and high levels of greenhouse gas emissions.

While the series hits hard and directly at agribusiness power, however, it misses a huge part of the story. And the core messages fall back on a framing of agriculture that furthers an already deep rural-urban divide when it comes to how we can transform damaging food systems. Primarily addressing urban consumers, the videos give the microphone to environmental lawyers, academics, an animal rights organizer and—in the final episode—clean-cut entrepreneurs promising their own brand of factory-produced protein in the form of crickets and other insects.

Absent from the series are the rural voices from North Carolina to Iowa to California who oppose factory farms because of the water and air pollution they face every day. Also missing are the rural-based environmental justice leaders who are important defenders of the country’s land and water. Absent, too, are the growing number of farmers in the U.S. and around the world who are raising animals within agroecological systems that protect the land’s adaptive capacity and mitigate greenhouse gas emissions.

“The videos fall back on a framing of agriculture that furthers an already deep rural-urban divide when it comes to how we can transform damaging food systems.”

The series’ first episode, “Meet the People Getting Paid to Kill Our Planet,” raises issues that merit debate, from the meat and dairy industry’s systematic evasion of responsibility for their emissions-intensive production systems, to the corruption of trade groups and lobbying organizations that claim to represent all farmers’ interests. But the deafening absence of rural people who have been fighting this fight for decades only grows louder in the subsequent episodes.

The lone farmer in the series appears in the second episode, “See the True Cost of Your Cheap Chicken”: A Georgia-based contract chicken farmer working for Pilgrim’s Pride who has been bankrupted and is a figure of despair. There’s not one word from farmers who have rejected the exploitation of the factory farm sector for decades or the new and beginning farmers who are trying to build a different kind of system grounded in fairness and ecological sustainability.

Our research has documented the rising greenhouse gas emissions of the world’s largest meat and dairy companies and detailed how those companies dodge accountability. Last year, we joined environmental justice, climate, and rural groups in calling for the U.S. Environmental Protection Agency (EPA) to begin regulating the potent greenhouse gas methane from the biggest hog and dairy operations and to launch a strategy to work with farmers to transition out of this damaging factory farm system. In November, at the United Nations Climate Change Conference (COP26), more than 110 governments signed a Global Methane Pledge that commits to reduce agriculture’s methane footprint. Factory farm animal production now accounts for 13 percent of total U.S. methane emissions.

The second video tells the story of how U.S. chicken producers are exploited by a handful of big poultry companies. And while it offers a close, insider look at the animals in a poultry barn and the inhumane way they are made to live (and often die prematurely), it doesn’t explain how a series of policy decisions—and policy failures—have allowed that system to become so entrenched.

The government has historically left farmers without protection from unfair contracts and retaliation by corporations; allowed the four large poultry firms to consolidate, eliminating effective competition; failed to aggressively enforce environmental laws; and provided federal backing for large loans that often trap poultry farmers in unescapable debt. The system did not come about by accident: It is the result of public policy choices that have favored consolidated corporate power at every turn. This abuse of power, too, must be called out.

The video series stands in stark contrast to reporting in the Times—and in its podcast—on consolidation in the beef industry. In that instance, a Montana rancher and his family get to tell their own story, to powerful effect. It also explained how U.S. regulators routinely ignored the impacts of beef company consolidation on ranchers, closed out local markets, and contributed to a situation that has left independent ranchers barely able to survive at a time of record-high consumer prices and record-high profits for the four controlling meatpackers.

All this brings us to one of the series’ biggest misses. While it points out the global damage wrought by the food system it depicts, it fails to drive home the fact that the system is dominated by global companies. The videos also miss the chance to point to transformative strategies that we can learn from around the world.

As global companies are promoting policies and investment that would export the factory farm system of animal production globally, smaller-scale farmers are learning from one another. They’re also adopting and advocating for agroecology—a system of food production that empowers farmers and Indigenous peoples, uses local knowledge to meet local needs, and integrates animals in biologically diverse systems that protect the land and water.

“The New York Times sets up a ridiculous false choice: Either we pollute the planet and treat animals inhumanely, or we eat crickets. Really?”

Some governments in Africa are following civil society calls to include agroecology in their National Adaptation Strategies, embracing agriculture’s potential to mitigate climate change and protecting the land’s adaptive capacity. Elsewhere, in Mexico, the government is developing concrete programs that respond to the calls of farmers’ organizations who have lowered costs and risks, while increasing biodiversity, by following agroecological practices.

Rather than follow these promising alternatives, the third episode takes us instead to an ancient solution to meeting protein needs when few alternatives exist: insects. And not insects raised in a barn but raised instead in a capital-intensive high-rise: a different kind of factory farm, one that is odorless and (we assume) less distressing.

The New York Times sets up a ridiculous false choice: Either we pollute the planet and treat animals inhumanely, or we eat crickets. Really?

We urgently need to stop the harm caused by factory farm systems. We need to protect our land’s adaptive capacity for the climate challenges ahead, not least the challenge of supplying a healthy diet to an ever-expanding global population. In turn, that requires that the government enforce existing laws: to protect the environment and ensure fair competition. It requires new climate and agriculture policies, too. We need a new vision for the farm bill that acknowledges the escalating climate crisis and advances critical solutions while acknowledging that all of us—urban consumers as well as farmers, rural communities—will all be affected.

Finally, and crucially, The New York Times and its readers, as well as U.S. policymakers, need to hear from farmers, farmworkers, and a diversity of other rural voices. Let’s not confuse agribusiness interests with the humans on the ground, many of whom are working hard to steward the land and rethink entrenched systems—all while keeping us fed.

The executive director of the Institute for Agriculture and Trade Policy (IATP), Sophia Murphy is a food systems and international economy expert with 30 years of professional experience, including as a board chair, program director, policy analyst, consultant and published writer. Sophia holds a BA from Oxford University, a MSc from the London School of Economics, and a PhD from the Institute for Resources, Environment and Sustainability at the University of British Columbia. Read more >

Ben Lilliston is the director of rural strategies and climate change at the Institute for Agriculture and Trade Policy, where he reports, analyzes, and writes about the intersection of climate, agriculture and trade policy. Read more >