What’s Next for Healthier School Meals? We Asked the USDA. | Civil Eats

Over a decade ago, the Obama Administration passed a revolutionary set of standards to improve nutrition in America’s public schools—changes that included requiring schools to serve more fresh fruits and vegetables, reduce sodium over time, and only serve pasta, bread, and crackers that were at least 50 percent whole grains.

Since then, multiple studies have found that school meals got much healthier, that kids didn’t throw more food in the trash, and that a significant number of children from low-income families became measurably healthier as a result.

Still, the standards continue to stir controversy, and over the past several years, debates over specific elements have been walked back by policy makers and complicated by the pandemic.

Under President Trump, Agriculture Secretary Sonny Perdue rolled back some of the standards by reducing requirements on whole grains, allowing schools to serve chocolate and strawberry flavored (i.e., sweetened) low-fat milk, and giving schools more time to meet sodium limits, which had been set to gradually decrease in phases. In the spring of 2020, a court ruled those changes were illegal.

Then COVID-19 arrived and school nutrition departments were in crisis. To help them provide meals to the many children who depended on them quickly, at home, and in the face of unprecedented challenges, the U.S. Department of Agriculture (USDA) loosened multiple requirements. Two years later, most kids are back in the cafeteria, but schools are still working with serious supply chain issues and continuously fluctuating attendance rates.

It’s within that context that, last week, Biden’s USDA issued its first announcement on nutrition standards. While many likely expected Ag Secretary Vilsack to be bullish about getting back to the rules he had put in place during his first term in the role, the agency instead issued “transitional standards” for the next two school years. The changes leave the prior administration’s decision on flavored milk intact, nudge the whole grain requirements back up slightly, and bring the sodium requirements down, but not as low as the original standards required.

The School Nutrition Association (SNA), which represents cafeteria workers and has long pushed for rollbacks, praised the USDA for recognizing the “tremendous challenges” that still exist. Health advocacy groups such as the American Heart Association and Center for Science in the Public Interest also issued statements of support for the temporary rules while urging the agency to move toward getting the standards back on track. 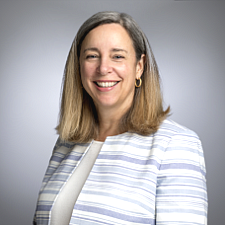 Stacy Dean, the deputy undersecretary for USDA’s Food, Nutrition, and Consumer Services, is at the center of this important discussion. And she sees the transitional standards as a first step in a “stakeholder process” intended to continue the momentum.

“We see USDA and our programs as having a key role to play in improving child health. It’s top of mind for us that we need to make progress there,” Dean explained in a recent interview with Civil Eats. Because the agency is aiming to issue a proposed rule on permanent changes to the standards by fall 2022, she said, “This engagement process is very timely and important. We’re asking all of our partners to use their convening power to pull folks together in conversation and in collaboration to talk about what the future of this program should look like.”

Dean—who was previously at the Office of Management and Budget and the nonpartisan think-tank The Center on Budget and Policy Priorities—has been in the role since January 2021. Here, she shares more details on how she’s eager to hear from parents and children—the people who will be most impacted—how the USDA is thinking about the practical implementation of nutrition standards, and how the work dovetails with the agency’s other priorities on climate and equity.

The USDA cited pandemic-related challenges in making this recent set of changes temporary. Does the agency believe these particular pieces need more work, in general?

When the standards were set in 2012, they were set to take place over many years . . . and [on sodium], they predicted an ability to move toward the sodium reduction levels. There was a lot of pushback from certain stakeholders around how feasible it was going to be to hit those. I don’t think there was debate about the target; there was debate about the feasibility of hitting the target. There was less back and forth around whole grains. And there have been Congressional riders that have overridden the standards with respect to flavored milk. I lump them all into one category, but there has been policy debate and intervention across the three, including the proposed rule from the prior administration and the lawsuits.

So, these standards provides some clarification on those debated elements while you work on more permanent standards. What can you tell me about the stakeholder process?

We’re planning to launch a variety of listening sessions. We’ll create opportunities for written comments, as well as work with our partners, whether it’s the school food operators themselves, the P.T.A. and other parents’ groups, chefs’ associations, or as public health groups. We want to hear from folks about what they believe the new standards ought to be. We are required under the law to update them to . . . reflect the 2020 Dietary Guidelines. Where they are out of sync with those, we need to refresh.

But the real conversation we want to have is about both what’s practical and feasible. And the way they’re constructed is important. For example, with sodium, the policy from 2012 was to basically stair-step down [every five years]. Is that the best way? Maybe it should be slow, steady reduction every year. If there’s a robust conversation to have on what the science-informed standards should be to get the best child health possible, then there’s also a robust conversation to have about how to do it and what help schools need—whether it’s advice about shifting to scratch cooking, procurement strategies, or staffing models. It’s also a conversation amongst industry about what it’s going to take for them to produce products that will meet the new standards.

What is so important to me is to hear from parents and kids. What do you want from your school food program and what’s tasty to children? We can only take it so far if we don’t have parents and kids involved in framing out the program.

Are things that go beyond simple nutrition facts, like sourcing and scratch cooking, really within the scope of what the agency can consider as you think about the future standards?

Absolutely, and we’re already working on it. For example, in the Build Back Better legislation, which is I hope [only] temporarily stalled in Congress, we had two proposals: one on kitchen equipment grants and then the other was on incentive grants to help districts improve the healthy food environment, which would have included shifting to scratch or making the journey to scratch . . . as well as sourcing locally. That’s one category.

My partners over at the Agricultural Marketing Service, another mission area of USDA, have just launched cooperative agreements that will probably largely go to state secretaries of agriculture but could also go to food hubs or local–regional grantees around sourcing food locally in order to offer it to school food programs. We’re doing that not just for school food, but also for food banks. That’s just an example of how our work on the Secretary’s goal of supporting local, regional, and much more sustainable and resilient food systems, how we’re using our purchasing on the demand side to drive some of the supply side.

You reimbursed schools at higher per-meal rates during the early days of the pandemic and you recently extended those reimbursements. When I talk to food service directors, they say that’s the real key to making food healthier. Is the agency planning on extending those increases over the long term?

We believe that the circumstances that warranted these waivers really persist, particularly in the supply chain. And so we’re talking with Congress about the idea of extending them for one additional year, so that school year 2022–23 will continue to have the flexibilities and supports the districts need to deal with the current conditions. That’s different from the longer-term. But I think you’re raising a really important question, and we hope to have a Child Nutrition Reauthorization that Congress will take up in the coming year. They’ve been talking about it and that’s a really great example where if, again, parents and districts and all of the interests who care about healthy food as well as local and regional food were lifting up their voices to talk about what will that take . . . that’s the conversation that we hope we can have.

The agency has repeatedly named climate and equity as its other big priorities. How do those priorities intersect with this process?

Equity is fundamental across the whole department and certainly for our work at Food and Nutrition Service. Even at its most basic level, when we look at who experiences food insecurity and who struggles with nutrition security, if you think about that with respect to childhood obesity or other diet-related health conditions, it is children—and families with children—of color. So we cannot tackle those problems without embedding equity in how we think about them and our solutions.

I would say another core priority for the USDA that’s outside of my mission area but is intrinsic to what we’re talking about here is introducing resiliency into local–regional food systems. So, of course we see ourselves as a part of that, and we can play a big role in that because our programs are buying food, and the way we buy food can support that effort. I do ultimately see us playing a role in climate too; there are lots of things we can do with respect to climate and food waste issues that are top of mind for me. All of these pieces fit together.