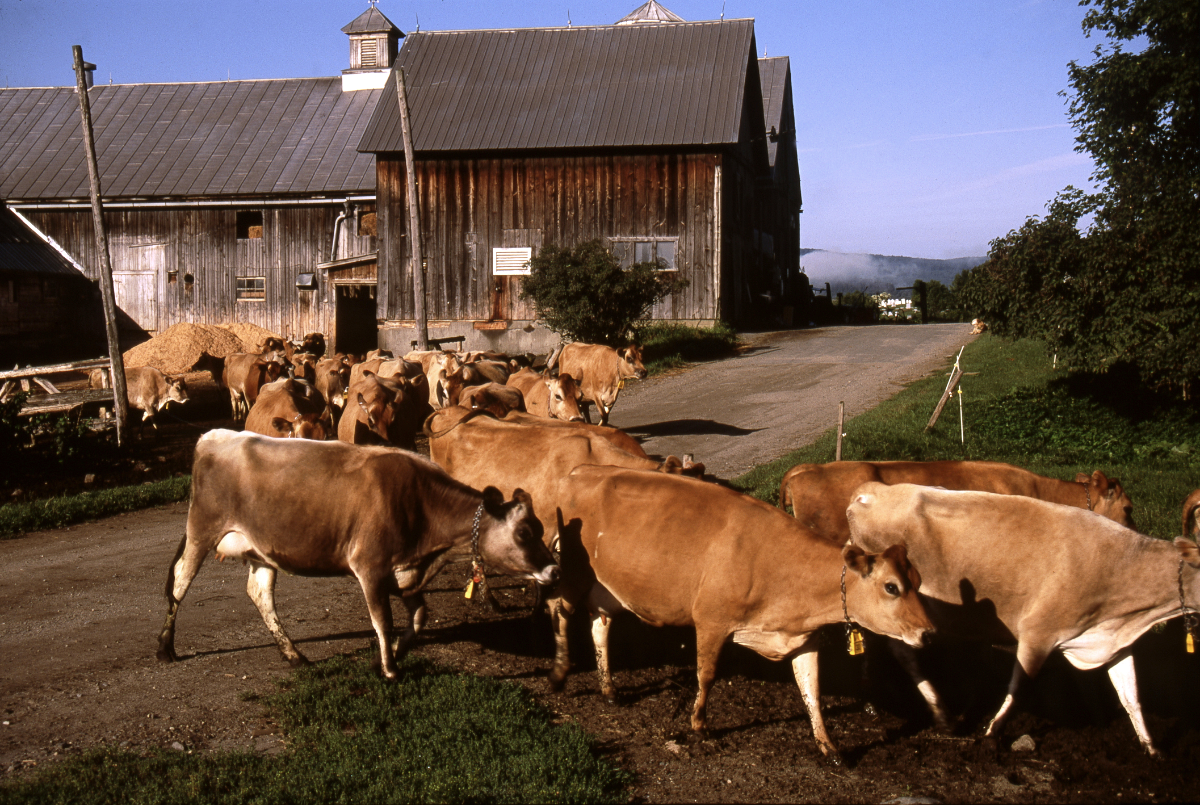 December 14, 2021 update: Danone today announced that it would offer these 89 farmers an optional six-month extension to their contracts, with a small increase in payments during that time, to give them more time to find new customers for their milk.

At the end of August, Danone, the global company that owns Horizon Organic, announced it was ending contracts with 89 small dairy farms in Maine, New Hampshire, Vermont, and New York. Farmers and residents in the Northeast were devastated, and the decision sparked outrage among organic advocates around the country.

Although the news represented just the latest blow for U.S. dairy farmers, who have been in crisis for years, it resonated within more recent national conversations around corporate consolidation and monopolies in agriculture. And, in late October, the issue reemerged in a bigger way, when a coalition of nine advocacy organizations delivered petitions with a combined 15,000 signatures demanding Danone “stand with Northeast organic dairy farmers.” At the same time, U.S. representatives from the affected states sent a pointed letter to the company asking its executives to reconsider the decision.

“By all accounts, your decision to sever the contracts of these 89 farms was one based solely on maximizing profits, regardless of the devastating consequences for the families and communities you cast aside and despite the reputational benefits and profit you gleaned from their work,” wrote the lawmakers. “Clearly, your 2020 corporate revenue of $27 billion was not enough.”

The situation struck a nerve because thousands of conventional farms in the four affected states have gone out of business over the past decade, and while opting for organic certification was once considered a surefire way to avoid losing the farm, that has changed since 2018. Organic, grass-fed upstart Maple Hill dropped 78 farms from its network in 2019, and Pennsylvania-based organic brand Trickling Springs went out of business in 2020. Among insiders in the industry, there are rumors circulating that more organic brands could be making cuts soon.

Organic milk still fetches a hefty premium compared to conventional—in 2020, Organic Valley paid farmers $31 per hundredweight compared to an average of $17 in conventional—but big organic dairies in the Western states such as Idaho and Arizona are able to produce cheaper milk compared to their tiny Northeast counterparts, and loopholes in organic certification have allowed some big farms to further cut their costs.

Because Danone works with large conventional farms for its other brands and its Horizon farms have had thousands of cows, advocates almost immediately linked the decision to a shift towards bigger farms in the West and companies taking advantage of those loopholes.

“They are replacing these farms with huge Western CAFOs capable of producing milk more cheaply,” the Real Organic Project reported in an email to supporters. In a letter New York Senator Chuck Schumer sent to Danone in late September, he used the opportunity to call on the U.S. Department of Agriculture (USDA) to close organic loopholes. In a blog post, prominent author and NYU Professor Emerita Marion Nestle (and member of Civil Eats advisory board) said she felt compelled to put it bluntly. “Organic milk in the Northeast costs more so Danone is cutting its losses,” she wrote.

But in an exclusive interview with Civil Eats, Chris Adamo, a Danone VP of Government Affairs, Policy, and Partnerships, countered those claims.

“This is not a move to bigger farms. It’s as simple as that,” Adamo said.

Instead, Adamo pinned the reason on the logistics challenges Horizon faced in getting milk from those farms to its processing plants, which he said involves a 400- to 600-mile one-way trip—a long haul for fresh milk, and a route that can be challenging to find drivers for, given ongoing nationwide trucking shortages.

“There are a number of things that potentially can go wrong at a plant in any given day, but that milk . . . can’t sit on the truck much longer,” Adamo said, noting that if something goes go wrong, “We try and reroute to other buyers, in which case we have to sell it at a significant discount. Oftentimes if we can’t find a new buyer for that milk, it gets to the plant and we have to discard it . . . and no one likes to talk about dumping milk.”

Adamo also disputed the narrative that Horizon is abandoning the Northeast and shifting its production to the West. The company currently processes milk from farms in the region in southwest New York, and the farms that are being cut are in a specific quadrant that is furthest east and north.

Adamo said that, while Horizon is ending contracts with farms in Maine, New Hampshire, and Vermont, the company is simultaneously bringing on 50 new small farms in Pennsylvania, New York, and Ohio that are closer to the plant, which will mean its Northeast production will support around 300 farms, and that its average herd size remains the roughly the same—from the current average of 97 cows to 100 cows after August 2022 when the current contracts end. Danone added that while it does have herds with between 1,000 and 3,000 cows, they represent 1 percent of its farms.

“Unfortunately, I realize that this does not help the 89 impacted farms, but from an industry standpoint, we’re continuing to invest in small farms,” Adamo said.

Ed Maltby, a former dairy farmer who is now the executive director of the Northeast Organic Dairy Producers Alliance (NODPA), believes that Danone has the resources to solve for those logistics, and it could have made the choice to invest in a new processing plant or other infrastructure to keep the farms onboard. “It’s a matter of just economics and costs and the bottom line; there was no thought of the damage they were doing to organic communities and the effect that they were having on these individual farms,” he said.

Adamo said Danone’s team has been in ongoing conversations with the farmers and was engaging with lawmakers, the USDA, and organic advocacy organizations to try to find solutions for the families. “This is a really hard decision for us, and we want to show these families courtesy and empathy and help them first and foremost,” he said.

The Supply and Demand Problem

Civil Eats contacted several of the farms that lost their contracts, but none were willing to talk about their experiences because they said Horizon required that they sign non-disclosure agreements, and they did not want to jeopardize their contracts before the official end date next August.

But Maltby and others in the industry said their options will be limited—they can either find new buyers, sell to the conventional market, or cull their herds. The ongoing dairy crisis, driven by consolidation as well as overall declines in U.S. dairy consumption, means that supply and demand are limiting factors for these organic dairy farmers.

“If these farms don’t find a buyer for their milk within that one year, then almost certainly they will have to sell their herds,” Maltby said, and doing so is usually financially devastating, since dairies typically carry operating debt and their capital is in their land, animals, and equipment.

“It’s not like losing a job and then you go out and find another job,” Maltby said. “If you lose your buyer, that is a significant part of your asset base, and your home and land is your collateral.”

In mid-October, Stonyfield announced it would invite “a number” of the farms to work with them, but did not provide concrete details. (Stonyfield was also owned by Danone until 2017, when the company sold the yogurt brand to another French dairy company, Lactalis.)

In an interview with Civil Eats, Stonyfield founder Gary Hirshberg said the company left details vague because Stonyfield does not want to over-promise while it’s still working out how many of the farms it can buy milk from, but he did confirm it will be in the “double digits.” Stonyfield’s processing plant is in Londonderry, New Hampshire, which is much closer to the affected farms.

“Our central position in relation to these farms does put us in a better position,” Hirshberg said. Still, he referred to the “delicate balance” between organic milk supply and demand, and especially with Horizon adding new farms to its supply chain, it’s not as simple as another company absorbing the supply. Stonyfield gets 80 percent of its milk from the Organic Valley cooperative, which has had limits on the amount of milk it will buy from each of its farms for several years. It sources the additional 20 percent directly but already has a waiting list of farms.

“We are going to take a significant amount [of milk], but nowhere near enough,” Hirshberg said. “We still felt it was important to make this announcement because there’s just been such gloom hanging over the organic family farm community . . . but also frankly to encourage others to do the same thing.”

Hirshberg said the real key to securing the future of all organic farms in the region is to increase demand for organic dairy from small family farms, creating new products to draw consumer demand away from conventional dairy and bring on new farms slowly to meet that demand.

While NODPA is part of the coalition fighting to convince Danone to change its mind and keep the farms on board, Maltby said that ultimately, a better long-term solution might change the bigger picture. It could mean rebuilding local infrastructure in Northeastern New England and thinking more creatively about sustaining small farms. A task force at Stonyfield, for example, is looking at ways to build processing that would allow the region’s small organic farms to sell milk powder or more bulk milk to institutions. Agriculture Secretary Tom Vilsack, who previously served as the CEO of the U.S. Dairy Council, also launched a task force to look for solutions.

“We will be looking for . . . help from the state governments and perhaps from the federal government to reassess the infrastructure needs of dairy in the Northeast,” Maltby said.

The goal is to assess the quantity of processing infrastructure that can appropriately support small, local dairies and build on the success of New England’s local purchasing campaigns. In other words, production might begin shifting toward its more regional roots and away from the current, highly-centralized model.

“Our hope” adds Maltby, “is that we can look not just at this crisis, but at what we need to take the industry into the future in the next 10 to 15 years.”