Pollinators Could Win When the Infrastructure Bill Passes | Civil Eats

A newly widened stretch of Interstate 5 in Washington has been planted with Wildflower Pollinator Mix. The blooms will change as the seasons change.
(Photo CC-licensed by the Washington Department of Transportation)

Americans are currently waiting for millions of dollars to be authorized for roads, railways, water infrastructure, and high-speed internet as a $1 trillion infrastructure bill approved by the Senate sits in limbo. As members of Congress haggle over companion legislation expanding the social safety net in the U.S., it’s unclear whether the infrastructure bill will get a vote by October 31 in the House of Representatives.

While the nation waits and Congress debates, it’s not just human futures that have been put on hold. Bees and butterflies are also left waiting for thousands of acres of habitat to be funded along the nation’s roadways.

The infrastructure bill authorizes the U.S. Department of Transportation (DOT) to make $2 million in total grants available each year over the next five years for states and other eligible entities to “carry out activities that benefit pollinators” along the roads and highways they oversee. This would include planting native flowers, adopting pollinator-friendly land management practices, and removing non-native vegetation.

Insect pollinators are essential to life on this planet; without them, entire ecosystems would collapse. They’re also vital to putting a wide variety of nutritious and affordable food on our tables. American farms widely deploy managed bees—honey bees and certain species of bumble bees—to pollinate fruits, vegetables, and nuts. Wild insect pollinators of all kinds also play a significant role.

There’s growing evidence that bees, butterflies, and other insects can be quite abundant in the minimally developed areas that run alongside the asphalt and pavement—especially when the land is managed with pollinators in mind.

Research has shown that wild bees provide levels of pollination comparable to managed honey bees, and insect pollinators generally have been found to improve fruit set twice as much as honey bees. As one recent study noted: “Honeybees may be imperfect substitutes for the loss of wild pollinators.” Combined, managed and wild pollinators contribute an estimated $24 billion to the U.S. economy.

This is why changes in pollinator populations are so concerning.

One-third of all North American bumble bee species have declined in the past few decades; some, like the endangered rusty patched bumble bee, have declined by up to 90 percent. And recent counts of monarch butterflies in California and Northern Baja show a dramatic decline of 99.9 percent since the 1980s. Insect populations as a whole are facing a crisis. American farms may already be suffering as a result: A recent study found that five out of seven crops in the U.S. are showing signs of what scientists call “pollinator limitation”—a lack of pollinators that restricts the full production of seeds and fruit.

One of the main causes of these declines is the loss, degradation, and fragmentation of native habitat where pollinators feed, nest, and reproduce. Urbanization and agriculture largely drive these land changes, but so do the nation’s 4 million miles of roads, which dissect the landscape, creating barriers to insect migration and isolating populations. Traffic and maintenance activities also pollute the landscape with heavy metals from gasoline additives, de-icing materials, and vehicle exhaust. And construction can destroy and degrade habitat.

Our roadways, however, have the potential to be part of the solution. There’s growing evidence that bees, butterflies, and other insects can be quite abundant in the minimally developed areas that run alongside the asphalt and pavement—especially when the land is managed with pollinators in mind. In Iowa, for instance, around 20 percent of the state’s butterfly species and sizable populations of bumble bees have been found living along roadways. In Kansas, wild bee diversity near roadways is comparable to remnant prairies. And one in 10 remaining milkweed plants—the only plant on which monarch butterflies will lay their eggs—is found along roads. 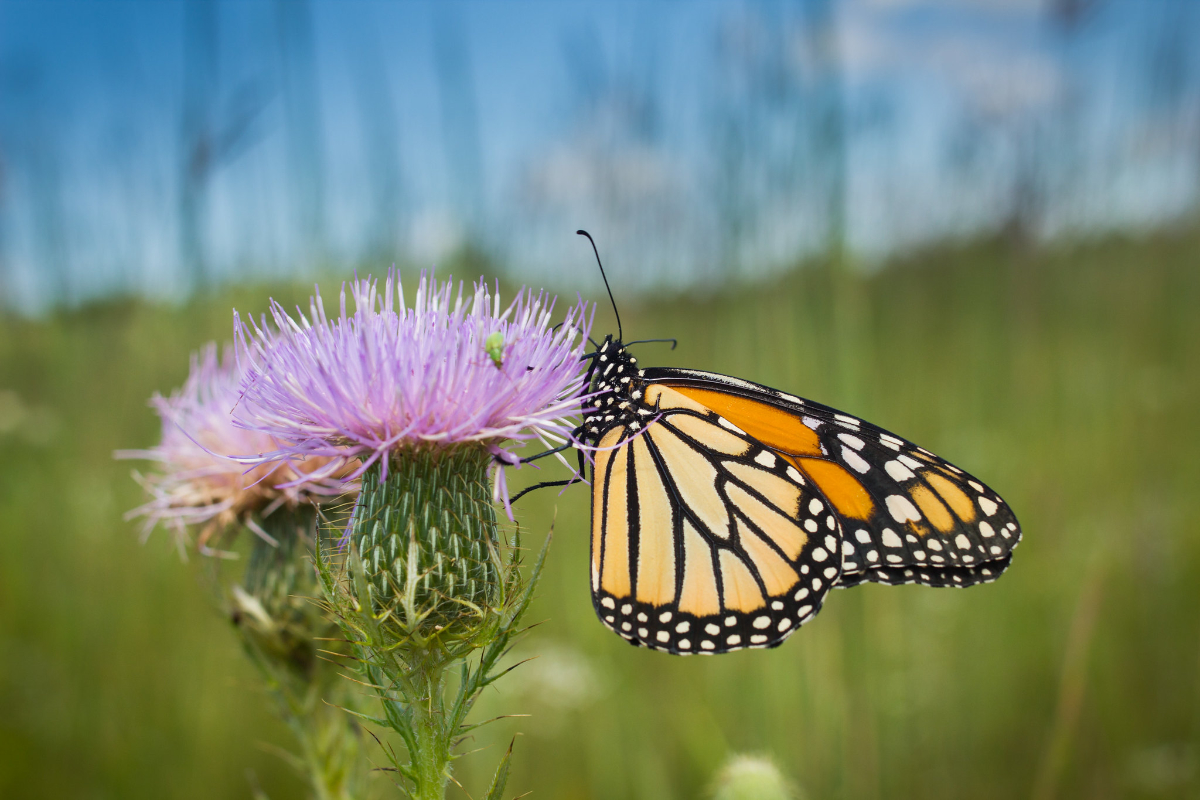 There are more than 10 million acres of state-managed roadsides in the U.S.—an area roughly the size of Switzerland. Much of it is already committed to vegetation and actively managed by state and local departments of transportation for driver safety, road quality, and aesthetic purposes. In highly developed areas—such as intensely farmed regions—roadsides may be the only “natural” space that remains.

“They’re these linear landscapes,” says Jennifer Hopwood, a senior pollinator conservation specialist for the Xerces Society and author of the aforementioned studies on bee habitats found along Iowa and Kansas roadways. “Some of them are incredibly beat-up with invasive plants or years of repeated mowing. But there are also some amazing, pristine habitats that you can still find on roadsides.”

Senator Jeff Merkley (D-Oregon) is the architect and main proponent of the infrastructure bill’s pollinator grant program, which was inspired by existing state programs, says Martina McLennan, a spokesperson for the senator.

Six states are part of the “Monarch Highway,” which runs the length of Interstate 35 from Texas to Minnesota, approximately following the butterfly’s eastern migration route.

“Senator Merkley’s proposed roadside pollinator program would complement and help to expand current state-level programs to increase pollinator habitat along roadways,” McLennan wrote in an email. The federal program would provide funds both to states with existing roadside habitat plans and those waiting to take the first step.

More than half of the state-level DOT websites in the U.S. list pollinator-friendly practices in their management routines. Some DOTs even have developed pollinator plans. For example, six states are part of the “Monarch Highway”—a series of habitat conservation projects along the length of Interstate 35 from Texas to Minnesota that approximately follows the butterfly’s eastern migration route.

In Iowa, the DOT has planted and maintained native vegetation along roadways for more than 30 years. In 1988, the Iowa state legislature officially adopted Integrated Roadway Vegetation Management (IRVM)—a toolkit of land management techniques and “sound ecological principles”—expressly for this purpose. The goal was to control erosion, reduce the costs of mowing, and reestablish Iowa’s native prairie, which had dwindled to just 0.1 percent of its original land area. The following year, the state created the Living Roadway Trust Fund (LRTF) to provide grants to counties and cities to do the same. Since then, 100,000 acres of roadsides have been planted with native vegetation, 46 of Iowa’s 99 counties have adopted IRVM, and 89 counties use native seed mixes.

Bees and butterflies were not part of the original vision for either program in Iowa. But they’ve become more of a focus over the years, especially since 2016, when the Obama administration released its national Pollinator Partnership Action Plan, says Tara Van Waus, who coordinates both the state’s LRTF and IRVM programs. Xerces Society’s Hopwood found that these programs have had a positive impact and underscore the potential of a national program.

The proposed federal program could potentially fund as many as 1,000 roadside pollinator projects each year.

But how many projects could actually be funded with $2 million set aside in the infrastructure bill? Iowa’s LRTF may provide a helpful reference point. For fiscal year 2021, the state awarded 36 grants totaling more than $600,000. The cost of projects can range from $2,000 to $150,000, according to Van Waus and the LRTF’s funding guidelines.

The proposed federal program could offer grants of up to $150,000; if the U.S. DOT were to approve project types that are similar to the LRTF, the new program could potentially fund as many as 1,000 projects each year. The amount of funding received would depend on the number of pollinator-friendly practices used in a project. This includes planting native flowers and grasses, removing non-native vegetation, modifications to mowing schedules and equipment, and judicious use of herbicides. The LRTF similarly requires that counties and cities must have an IRVM plan on file to be eligible for funding.

While $2 million a year won’t fund every project in every state, it could fund quite a few, and universal funding isn’t the point. The hope, says McLennan, is that states and other entities would also continue to access multiple additional funding sources.

Van Waus says it’s important to view the federal program “as a new player to the game.” She adds that a national roadside habitat program has value because pollinators, like roads, don’t stop at state lines.

“Roadway systems planning requires a big-picture view at all levels: city, county, state, and regional,” she says. “The same applies to planning for migrating pollinators.”

Matt Kelly is an independent journalist based in the Finger Lakes of New York. He is the creator and editor of the Bee Report. He is also the director and producer of the recently-released documentary film, the Bees of Grand Staircase-Escalante. Read more >