The program from the nonprofit Native Conservancy is helping cultivate food sovereignty, regenerate the marine environment, and boost the local economy.

Just east of the Kenai Peninsula in south central Alaska sits Prince William Sound, an inlet full of tidewater glaciers spanning 3,800 miles of coastline and flanked by the jagged Chugach Mountains. Home to several species of salmon and other fish, commercial fishing has been the main industry that has sustained its communities for decades. But warming waters caused by climate change has led to fewer fish stocks, making commercial fishing more challenging and less profitable.

“I never had any interest in buying a fishing permit or owning my own boat because I saw the changes happening,” says Rion Schmidt, a Sugpiaq Native who has worked in fishing and fish research his whole life. “Fewer and fewer fish, water warming up; I realized while I might be able to live a subsistence lifestyle and eat these foods, that making all my money off the fisheries might not be totally sustainable for someone like myself.”

Instead, he’s looking to another species that has supported Indigenous Alaskans for millennia: kelp. The nonprofit Native Conservancy has started a program to empower and equip young Indigenous people with the resources and training to start their own kelp farms. The goal is threefold: creating economic opportunities, supporting the health of the ocean, and connecting people to a traditional food source.

Schmidt is one of seven soon-to-be-kelp-farmers working with the Native Conservancy to build out his 22-acre kelp farm next year. Cultivating this traditional food in its natural environment is a prime example of food sovereignty, which Schmidt defines as “protecting Native people’s right to the resource.” 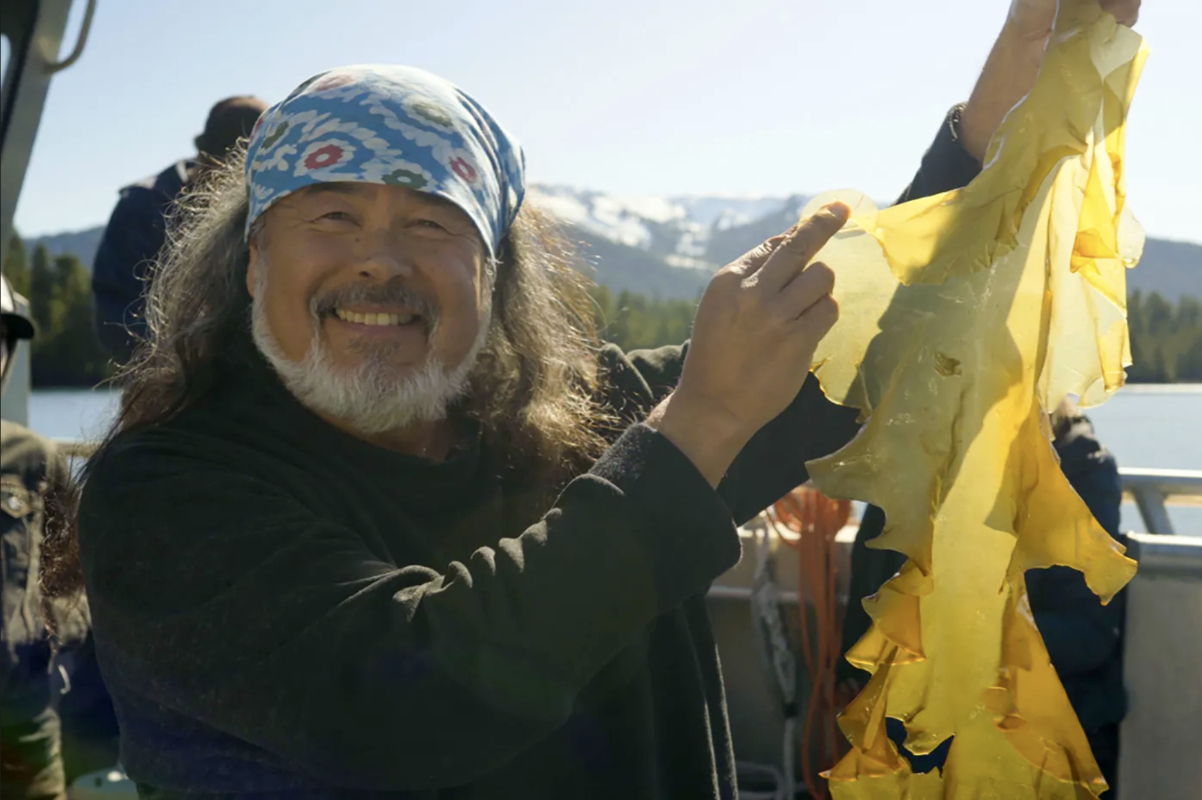 The Native Conservancy is the first Native-owned and Native-led land trust, which empowers Alaska Native peoples to permanently protect and preserve endangered habitats on their ancestral homelands.

The Conservancy was founded in 2003 by Dune Lankard, who grew up in the Copper River Delta and Prince William Sound. There, his family fished and hunted wild game and always had more than they could fit in their freezers. They regularly delivered their excess to friends and family who appreciated traditional foods and didn’t have the time, energy, or resources to hunt and fish themselves. He learned at an early age that sharing an abundant harvest was not only an act of philanthropy and good will, but also a responsibility.

When the 1989 Exxon Valdez spill left subsistence foods contaminated in oil, Lankard began to focus his life’s work on conservation and protection of the wild foods that had sustained his community for thousands of years. He started the Eyak Preservation Council the day of the spill, which then worked to successfully protect 765,000 acres of forest from clear-cutting in the spill zone in 1995. The Preservation Council became a nonprofit in 2001 and now focuses its efforts on salmon habitat protection and environmental justice.

Since its founding, the Native Conservancy has worked with the Preservation Council to preserve more than 1 million acres of wild salmon habitat along the Gulf of Alaska coastline. Many of the Native Conservancy’s current projects work to build resilience and food sovereignty by delivering traditional foods to elders, piloting a portable freezer model in the community, and training kelp farmers.

The ecologically restorative benefits of growing kelp are well documented: Kelp grows in the ocean and requires no land, fresh water, or fertilizer. In contrast, it takes 108 gallons of water to produce 1 pound of corn and 216 gallons to produce one pint of soybeans. Kelp can also sequester carbon up to 50 times faster than terrestrial forests, which means it’s a powerful tool in countering the impacts of climate change, such as ocean acidification and warming.

To Lankard’s second point, kelp is nutrient-rich, with high levels of potassium, magnesium, iron, and calcium, so it can support human health, too. Coastal tribes have harvested and dried kelp for generations, using it in a variety of dishes from soups to kelp cakes—a delicacy made by smoking and curing kelp and dried berries. Lankard remembers that during his childhood, his mother and grandmother harvested kelp in the spring during low tide and brought it home to dry and eat.

To Lankard’s final point, a regenerative economy is one that promotes cooperation and environmental sustainability rather than extraction. By supporting young Native kelp farmers, Lankard wants to empower communities to decide their own fate. He also hopes to get ahead of what could be a burgeoning kelp industry before it’s entirely profit-driven. The idea is to equip young Indigenous farmers with the skills and resources they need to successfully source, cultivate, harvest, process, and market kelp themselves.

“It’s not that easy with this operation because there is no established kelp industry; it’s a fledgling space,” Lankard says. “That’s why we felt that the only way Indigenous people can get in, let alone compete in this new kelp space, is if we address [potential] bottlenecks through our testing and our pilot programs.”

A New Generation of Farmers

The process of kelp cultivation begins with a Native Conservancy dive crew that sources specimens of fertile wild kelp, or sorus, to maintain genetic diversity within the crop. Then, harvested sorus is brought to the Conservancy’s partners at the Alutiiq Pride Marine Institute in Seward. Here, the spores are encouraged to settle onto spools made of string wrapped around large PVC pipes, and the kelp starts to grow.

Water is changed daily to support the young algae. After six to eight weeks, when the algae is 2 to 3 centimeters long, it is transferred, or outplanted, onto offshore test lines accessible by boat. The kelp then grows to its full size in the open ocean. 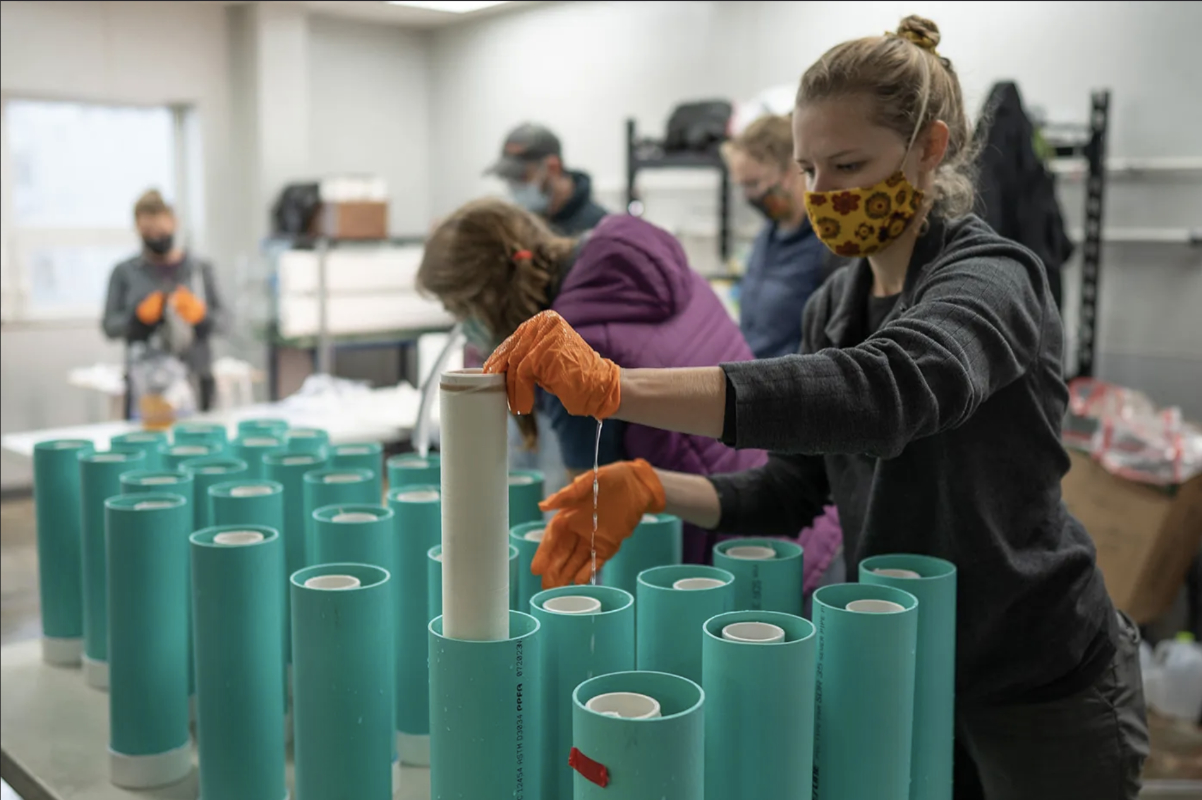 “Our aim is to collect and synthesize information that will be most useful to future farmers,” says Tesia Bobrycki, director of regenerative economy at the Native Conservancy. This includes “a landscape analysis of the best, proven places to grow kelp, array designs, species-specific modifications, and best practices for outplanting, monitoring, and harvesting,” Bobrycki says.

In addition to conducting research to inform future farmers, the Native Conservancy recently received funding from the Denali Commission, a federal agency providing infrastructure and economic support throughout Alaska, to design a portable kelp nursery. The Conservancy is now making this scaled-down model available to remote villages and communities around the state.

Startup costs can a be a big barrier to entry for new kelp farmers, with expenses for permits, anchors, buoys, and lines totaling tens of thousands of dollars. To address this, the Native Conservancy is working to help secure low-interest, long-term deferred loans for Indigenous farmers as they start their mariculture operations. The Conservancy now has commitments from several donors to jumpstart the loan program, and is in the process of interviewing tribal and non-Native community development financial institutions to house this loan product.

Questions for the Future

As Schmidt prepares to build his farm, and the Native Conservancy looks toward the future, many questions remain.

For kelp that is harvested for commercial purposes, marketing and creating a value-added product can be tricky. New farmers must figure out what their regional markets look like for kelp, and whether they want to sell their harvest wholesale or work with producers to create new, value-added products like the kelp popcorn, pastas, pickles, and salsas produced by companies including Blue Evolution and Barnacle Foods. If the quality of harvested kelp is not food-grade, farmers may have to sell it at a lower price to be used as fertilizer or compost. New farmers will have to grapple with these questions as they write their business plans, and they won’t always have answers.

Another concern is ensuring the carbon-sequestering power of kelp cultivation is not squandered. While harvesting kelp annually will certainly yield economic benefits, a major goal of the Native Conservancy is for every acre of kelp harvested, one acre of kelp will stay in the water year-round in order to sequester carbon long-term and support ocean health. Lankard is looking at creating a nonprofit with regional tribes to push for policy that would potentially allow the community to grow restorative kelp alongside commercial kelp.

Ultimately, Lankard is hopeful that Indigenous and non-Indigenous customers alike will be interested in his community’s products, not only for taste or quality but because these farmers are looking to live a new way on the planet—one that supports environmental restoration as well as a regenerative economy. While the coming months will surely present further questions and challenges, Lankard is not deterred. He says, “Let’s just see what we’re capable of accomplishing.” 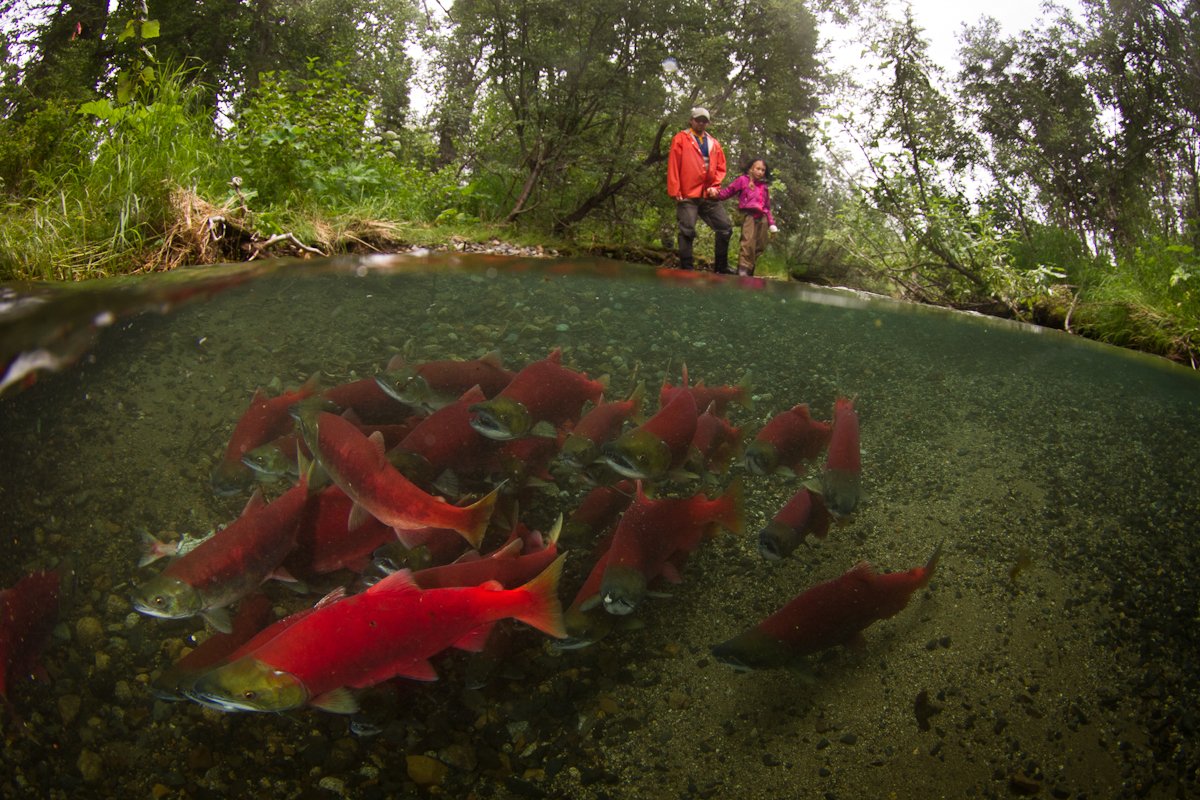