Research by the Karuk Tribe of Northern California aims to build resilient food systems in the face of droughts, wildfires, and extreme weather.

As fall arrives in Karuk country in the Klamath River Basin of Southern Oregon and Northern California, the nights grow cooler, and many families hunt for deer and elk and gather acorns, evergreen huckleberries, and tanoak mushrooms.

These traditional foods are key to food security on a family and community level, explains Lisa Hillman, a Karuk Tribe cultural practitioner and weaver. “Acorns and salmon are central to my culture, which is central to my identity,” says Hillman. “If you eat salmon and acorns, you don’t feel too full, you’re not hungry for a long time. It’s that feeling of not having any need for [any]thing . . . and you wonder, ‘Is it in my DNA?’”

And yet, many of these foods are in danger due to drought, wildfire, and other impacts of the rapidly accelerating climate crisis.

Today, Karuk people, almost 9,000 members and descendants, are fighting to revitalize the cultural foods in the area after more than a century of resource extraction and fire suppression, while dealing firsthand with the impacts of a climate that is becoming less conducive to food production and security.

This year, the skies cleared just in time for the opening day of deer hunting season in mid-September. But just four days prior, the air quality in the Klamath Basin communities topped 500 parts per million as several high-intensity forest fires burned throughout their territory, spurred by prolonged, historic drought and crowded forests thick with fuel. This type of fire negatively impacts the health of all species in the area and stifles summer activities and ceremonies. It is also extremely draining and defeating to endure year after year.

Kathy McCovey is a Karuk Tribal member with profound expertise about forests and Karuk food systems. She has been caring for Klamath Basin forests her whole life and says what she and others in her homeland are witnessing is unprecedented.

“We used to have rains that would start in September. And it would rain and rain and rain and then it would stall, and we’d have these really nice little misty spring rains, and then we’d have a summer,” she recalls. Now, the rains tend to arrive much later in the fall and peter out by early spring, making the conditions very dry even by June. Days when the temperature rises above 100 degrees were once rare in the region, but they have become increasingly common and weeks full of 90–100-degree days now occur as early as May.

Fire- and temperature-induced changes are severely impacting the quality and quantity of traditional Karuk foods.

McCovey says the region has also seen an increase in the number of days with an inversion layer, meaning wildfire smoke, dense with pollutants, becomes trapped near the ground by a layer of warmer air. “We’ve been 15 some-odd years caught in inversion layers for wildland fires, and that’s [had a] cumulative [impact] on the plants, the people, and the animals.”

Eight of the 10 largest wildfires in California’s history have burned in the last 10 years, and nearly every year the size of the fires have grown—as have the losses incurred by communities. Karuk territory has been no exception. In 2020, the Slater Fire devastated Happy Camp, the Karuk Tribal administrative headquarters, and more than 200 homes, many of which belonged to Tribal members. Family gathering areas were also burned severely.

Since August, the McCash Fire has been burning downriver, prompting evacuations. And by the end of the century, Karuk ancestral territory is expected to experience even more fire danger and warming trends with a projected 53 more days with highs over 86 degrees Fahrenheit. 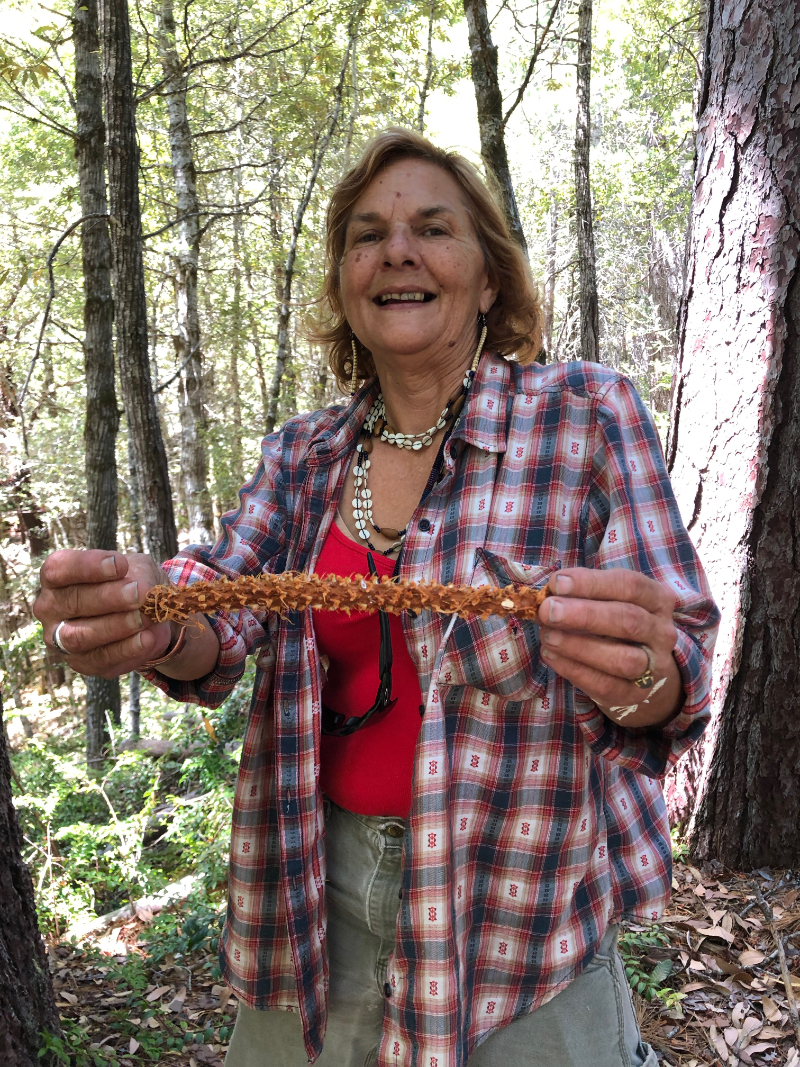 This has severe impacts on traditional Karuk foods. Fire- and temperature-induced changes are influencing the quality and quantity of forest and river foods, the timing of harvest for many wild foods, and the ability to harvest at all.

For almost 10 years, the authors have been part of a group of researchers from University of California, Berkeley and Frank Lake from the U.S. Forest Service who are working with the Karuk people to tackle these challenges. By integrating Karuk knowledge and methods in forestry and ecology, this collective aims to identify and track the impact of climate change and management on the plants and animals used by tribal members for food and fiber.

Together, U.C. Berkeley researchers and the Karuk Department of Natural Resources have created management monitoring methods to systematically measure and track the impact of climate change and Karuk restoration efforts in gathering areas.

Over the last three years, the team has visited and observed 31 different Karuk gathering areas, harvesting 20 food and fiber plant species throughout the seasons. During the 2019 and 2020 harvest seasons, 18 out of 31 gathering areas had failed harvests or no food production at all. Many others had very limited harvests or highly fluctuating harvests between the two years. The observations and data we collected suggest an urgent need for supporting and scaling up Tribal-led management to increase productivity and cultural use quality. We also found that it’s important to monitor the many species experiencing climate stress very closely. 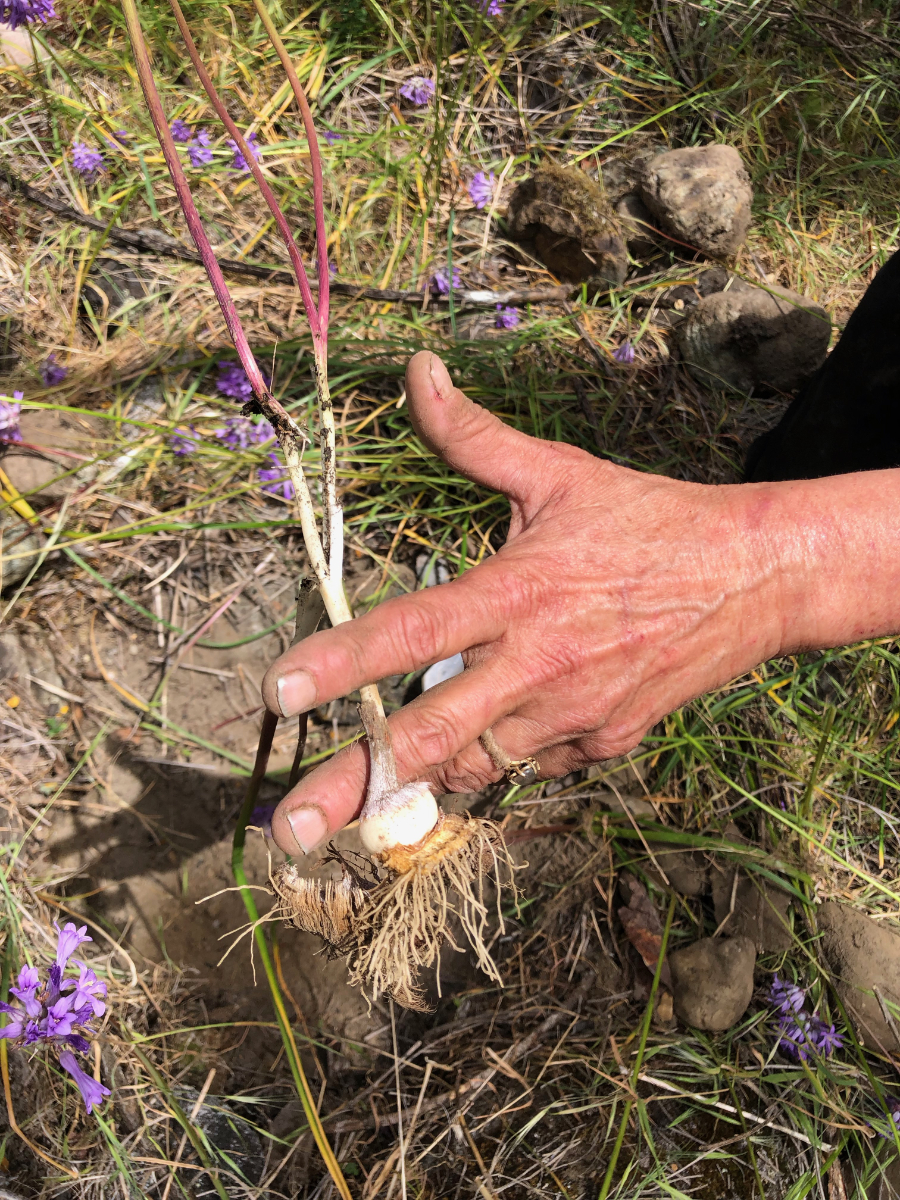 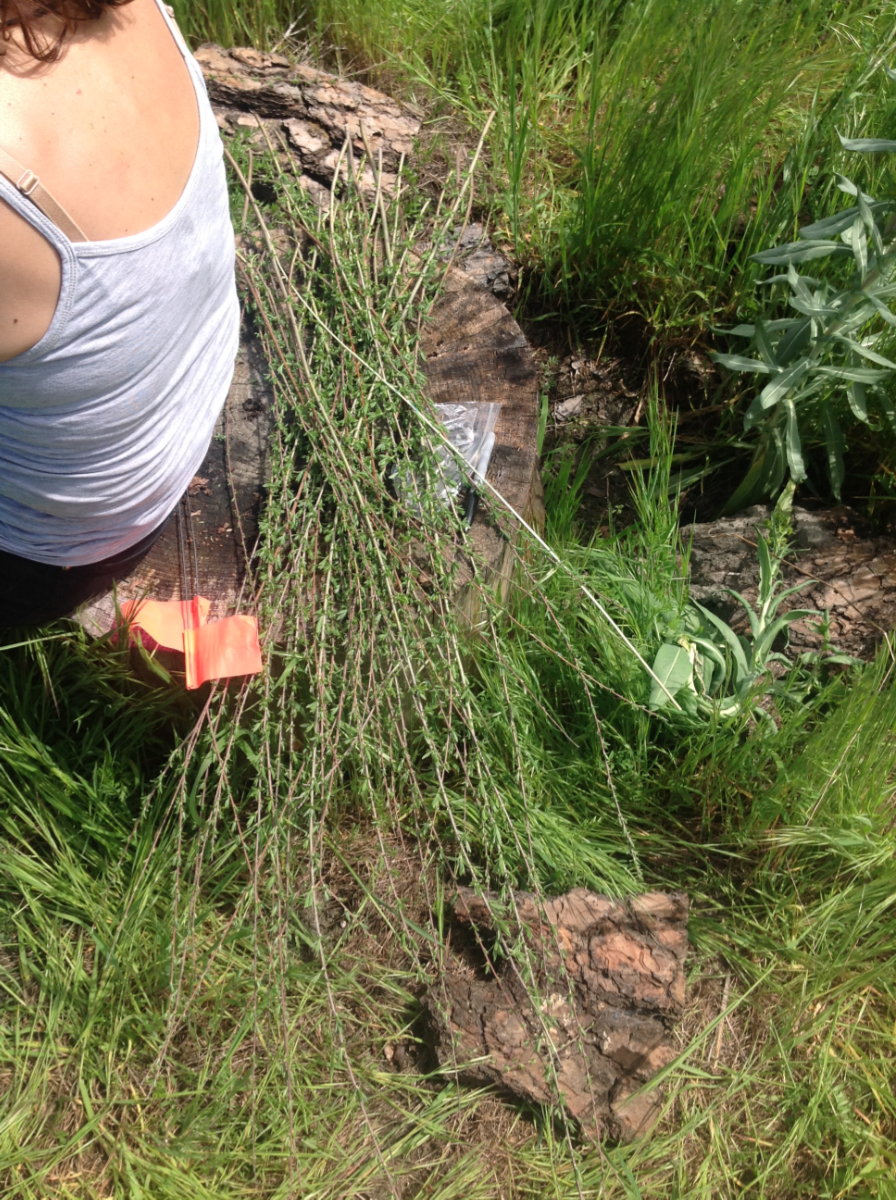 Families have been returning to these gathering areas for generations and they are still connected to the plants, animals, birds, and fungi there through continued cultural practices and forms of land management. They are also carrying forward a host of memories, stories, and methods.

For example, as McCovey was driving down the road to one of our study areas recently, she stopped on the side of the road to visit an oak tree that is important to her family. “This is a tree that my great-grandma used to pick acorns from, and it is starting to die,” she said, pointing to branches that were brown and lifeless. “It’s unfortunate because about two or three years ago, it was a really, really healthy tree.”

Acorns are a keystone food. Many of these kinds of old growth “legacy trees” are dying, and the people who rely on them have seen many consecutive years of poor acorn harvests, shrinking acorn caches for home use and ceremony. The loss of older, productive acorn trees to drought stress is particularly concerning as fewer acorns also mean fewer young oak trees to take their place.

There are also a number of plants that are key to hunting and gathering of foods, even if they are not edible themselves.

For instance, one gathering area we have visited for the last three years is home to one of the biggest Pacific yew trees anyone in the community has ever seen; the enormous 300-year-old branches, bark, and crown are all impeccable and inspiring. Yew wood is used to make bows, which are essential hunting tools.

Yews are extremely sensitive to even the slightest changes in climate and habitat. Even the falling of a neighboring tree can cause light exposure that leads to stress. Though catastrophic fire, prolonged drought, and disappearing riparian areas have put yews at great risk, their continual cultural use and stewardship by the Karuk people has so far counteracted those threats. The hope it that by monitoring changes to the climate and shifting their conservation practices accordingly, the Karuk people can ensure that species like the Pacific yew will be around for future generations. 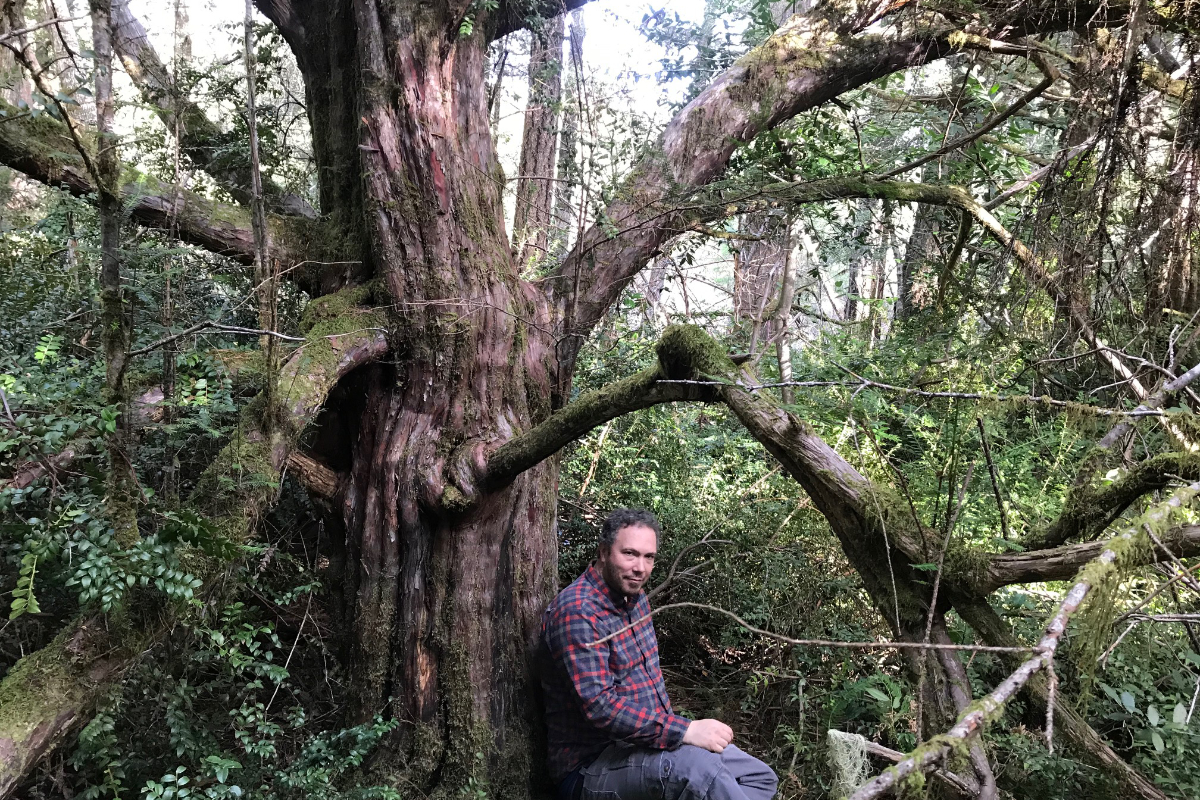 Sitting at the foot of a mother yew tree. (Photo courtesy of Megan Mucioki)

Basket weaving—using hazel sticks, beargrass, and red and black ferns—is another important component of food security, as plants provide the tools to make baskets for securing, processing, and cooking food. And yet the increased heat and long-term drought is evident in the health of these plants and others.

For example, entire clumps of beargrass in Karuk country are brown and dying. The leaves on the big leaf maple trees have begun curling and browning weeks before they begin to drop their leaves in the fall. Madrone trees have seen profuse, early flowering—a sign of cumulative stress. Yerba buena, a perennial herb used to make tea, has begun to turn purple later in the season, when the smoke inversion layers are the thickest. And the timing for peeling hazel sticks is increasingly unpredictable as spring weather fluctuates from unseasonably warm to cold.

“I feel like (hazel) growth is getting stunted,” a participant in a community discussion on climate change, led by U.C. Berkeley researchers, reported recently. “It seems to start budding out too early, because we get this weird shot of hot weather, but then they stop because it’ll snow after that, and then they’ll start growing again. They’re not as long and beautiful as they were 20 years ago.”

“[We’re] looking at survival and existence through thousands, and even a million, years. So knowing the processes and how our survival is dependent on our environment and ability to gather food. . . is going to be what helps us survive as people, period.”

The observations and experiences of climate change by Karuk people are rich and unparalleled. Karuk and U.C. Berkeley researchers launched a citizen science application for mobile devices to record observations of climate impacts by the Tribal community at large. The tool enables long-term monitoring of Karuk gathering areas and support of tribal sovereignty through the collection and application of data to inform climate adaptation.

It also supports the return of cultural fire and other Tribal-led management practices for culturally important species such as the pruning of huckleberry, willow, and California hazel nut or the tilling and aerating of Indian potato beds to enhance ecosystem and community resilience.

While Karuk people are observing changes and events on their landscape that have probably not been seen for thousands of years, they have been stewarding the land for much longer, sustaining themselves and their land through a number of colonial upheavals of their food systems.

Phil Albers Jr., the cultural activities director for the Karuk Tribal Temporary Assistance for Needy Families (TANF) program, emphasizes the need for sovereign, resilient food systems which include Tribal led monitoring and management of Tribal lands. When it comes to climate resilience, he says that the Tribe is looking seven generations into the future and beyond.

“[We’re] looking at survival and existence through thousands, and even a million, years,” he said. “So knowing the processes and how our survival is dependent on our environment and ability to gather food, and how we can maximize both to ensure future opportunities—that is going to be what helps us survive as people, period.”

Acknowledgements: Many people contributed expertise to the ideas shared in this piece, including Vikki Preston, Frankie Tripp, Frank Lake, Marit Doshi, Andy Lyons, and Lisa Hillman. The proceeds from this article were given to the Karuk Endowment for Eco-cultural Revitalization to support sustained management, use, and revitalization of Karuk food systems.

Megan Mucioki is an assistant research professor at the Social Sciences Research Institute at the Pennsylvania State University. She has worked alongside Indigenous communities in the United States, Canada, and abroad to support Indigenous foodways through research, outreach, education, and extension. Read more >