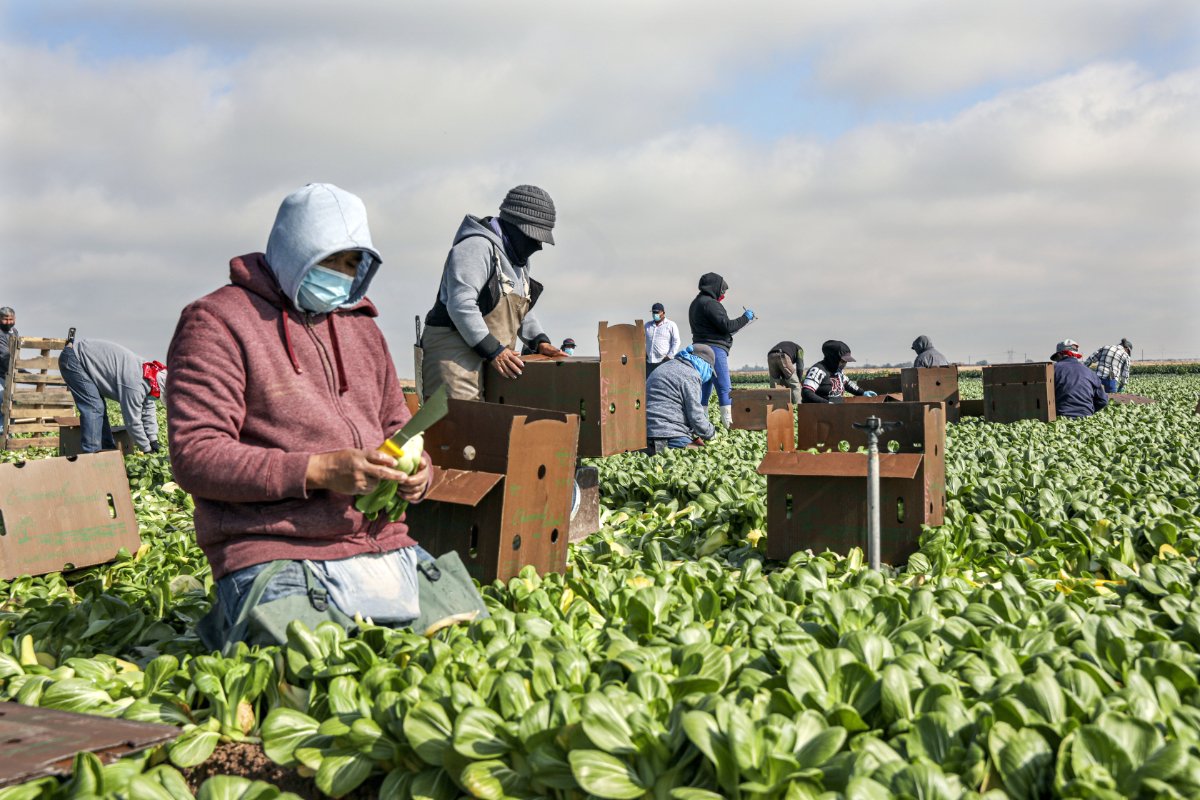 September 23, 2021 update: Governor Gavin Newsom yesterday vetoed the bill to allow farmworkers to vote by mail in union elections. A message issues alongside the veto noted “inconsistencies and procedural issues related to the collection and review of ballot cards” that might make it difficult to protect “both agricultural workers’ intent to be represented and the right to collectively bargain.”

When Baldomero Perez, a farmworker who lives in Bakersfield, voted in a union election in 2016, he saw many of his colleagues were fearful when they went to cast their ballots. Farmworker union elections often happen on the grower’s property. Perez, who works in the table grape, blueberry, and mandarin industries, thinks farmworkers should be afforded the same options as Californians voting in state elections—including the option to consider their ballots at home and then drop them off or send them back in the mail.

“I’ve seen how different it is when people cast their vote by mail,” Perez said via a United Farm Workers (UFW) translator. “The vote is safe, and they don’t receive pressure from anyone.”

California lawmakers are advancing a bill sponsored by UFW that would give farmworkers more ways to vote in union elections. AB 616 would allow workers to receive ballots and fill them out wherever they please, on their own time. Then, they could hand deliver or mail their ballots to the state board that oversees farmworker union elections, or give them to a union organizer to deliver in a signed and sealed envelope.

It’s headed to the Assembly for a final vote after clearing the Senate last Thursday.

The bill comes on the heels of a Supreme Court decision that dealt a blow to farmworker organizing. In June, the conservative court overturned a long-standing California rule that allowed organizers to meet with farmworkers at their place of work. Farmworkers often also live in housing provided by growers on the farm property, making them even more difficult for organizers to reach.

Business groups and legislators opposed to the bill argue that it leaves workers more vulnerable to pressure or coercion from union organizers or coworkers. But supporters say it’s not uncommon for employers to dissuade workers from forming unions, sometimes through illegal tactics.

Even before the Supreme Court ruling, few farmworkers in the state were unionized despite California’s status as the birthplace of farmworker organizing. Of the more than 407,000 farmworkers in California last year, just 6,626 were a part of UFW, the union founded by activists Cesar Chavez, Dolores Huerta, and others.

Right now, if a farmworker in California wants to organize their worksite they have to go through a couple of steps. Organizers must present a petition to a state board and the employer showing that a majority of employees are interested in having a union election. Then, an in-person secret ballot election is held, often at the worksite. If a majority of workers vote to form a union, the employer is required to recognize the union.

AB 616 would still allow in-person elections, but Assemblymember Mark Stone, who authored the bill, says the goal is to give farmworkers another way to vote—one that lines up with Californians’ option to vote at home in regular state elections.

“We found that being able to get ballots to people on their schedule, and (in) the way that they want to process it, increases participation,” said the Santa Cruz Democrat.

Under this measure, workers could cast their vote in the presence of another person. It’s important to note, however, if workers feel they have been coerced into voting a certain way—by a union representative, a colleague, or by their employer—they can bring complaints to the Agricultural Labor Relations Board, which oversees farmworker union elections, and potentially get the election overturned.

The California Chamber of Commerce, which has tagged the measure as a “job killer,” says it effectively eliminates secret ballot elections, which help protect workers from undue influence. “The benefit of a secret ballot election is it allows [workers] to go in and—in secret—write down what their choice is,” said Chamber lobbyist Ashley Hoffman.

The Western Growers Association, which also opposes the measure, makes similar points about the possibility of worker coercion and argues that if the bill were passed, organizers wouldn’t be required to give ballot cards to every worker. Once more than 50 percent of workers sign ballots expressing their desire to be represented by a union, the process can end. Stone disputes that workers who want a ballot might not get one.

Employers sometimes use legal and illegal tactics to deter workers from forming unions, says Kent Wong, director of the UCLA Labor Center and vice president for the California Federation of Teachers. Managers might require workers to meet one on one with supervisors about the unionization drive, which is legal, or threaten to fire a worker if they vocally support the union, which is illegal.

Businesses usually don’t face steep penalties if they illegally coerce or retaliate against workers. If an employer fires a worker for organizing, for example, the board overseeing those complaints may force the company to reinstate the worker and pay back wages, but not hit them with a large fine for breaking the law.

“The penalty is so minimal that it’s a risk that many employers are willing to take,” Wong said.

The very nature of this bill—and how to describe it—is hotly contested.

Opponents of the bill have cast it as a “card check” provision. Card check is an alternate form of union election in which workers sign cards expressing interest in forming a union, and if a majority of workers sign cards, the employer must then recognize the union. This method is already used by public sector workers in California. Legalizing it for private sector union campaigns has historically been a priority for labor groups nationally and vigorously opposed by business groups, who say union organizers are more likely to coerce workers this way.

Stone says his bill does not involve a card check. It was modeled on California’s 2016 Voter’s Choice Act, which gives voters more options, such as casting their ballots by mail, drop box or at a voting center.

The bill is fundamentally different from a card check system, said Catherine Fisk, a professor at U.C. Berkeley School of Law focused on employment and labor law. In card check, Fisk said, the union or the employer or anyone can distribute the cards people sign to express interest. Under AB 616, it’s a ballot created by the ALRB. Furthermore, under a card check, no third party is really overseeing the process. But Stone’s bill has ALRB do it.

Ken Jacobs, who chairs the U.C. Berkeley Center for Labor Research and Education, says that while the bill has some similarities to card check policies—like the fact that ballots are considered valid for up to 12 months—there are important differences as well. For example, the fact that ballots are mailed or delivered in sealed envelopes provided by the ALRB, makes it different from card check policies.

Jacobs says the current union election system gives employers significant access to workers and this bill, he says, puts the decision in the hands of the farmworkers.

The Legislature has passed card check bills for farmworkers several times in the past only to have them vetoed, first by Gov. Arnold Schwarzenegger and later by Gov. Jerry Brown. Although AB 616 is expected to clear the Assembly for a final vote, Gov. Newsom’s office declined to comment on the bill.

This article was originally published by CalMatters, and is reprinted with permission.

Grace covers California’s economy for CalMatters. Previously, she was an editor at the Washington Monthly. She is a graduate of Pomona College. Read more >