With Native Americans experiencing the nation’s second highest risk of pregnancy-related mortality, a renewed focus on traditional foods is helping them achieve healthy births while addressing ongoing traumas of colonization and food apartheid.

When Maria Parra Cano became pregnant with her first child, she was weaning herself off the diet rich in cream, cheese, and butter that she had gotten used to while cooking and eating as a culinary student at Le Cordon Bleu in Scottsdale, Arizona.

She was diagnosed with gestational diabetes and struggled to change her diet, manage a healthy weight, and keep a healthy blood sugar level. She took the constant uneasiness in her gut as her body’s way of telling her that she needed to go back to the traditional foods she grew up eating in Mexico. Considering the health of her future child made the shift seem all the more important.

For some Native people, pregnancy is a driving force for reconnecting with traditional foods and jump starting their sometimes confusing and frustrating journey through understanding good nutrition, changing dietary habits, and realizing they’re on the outskirts of healthy food systems built without them in mind. 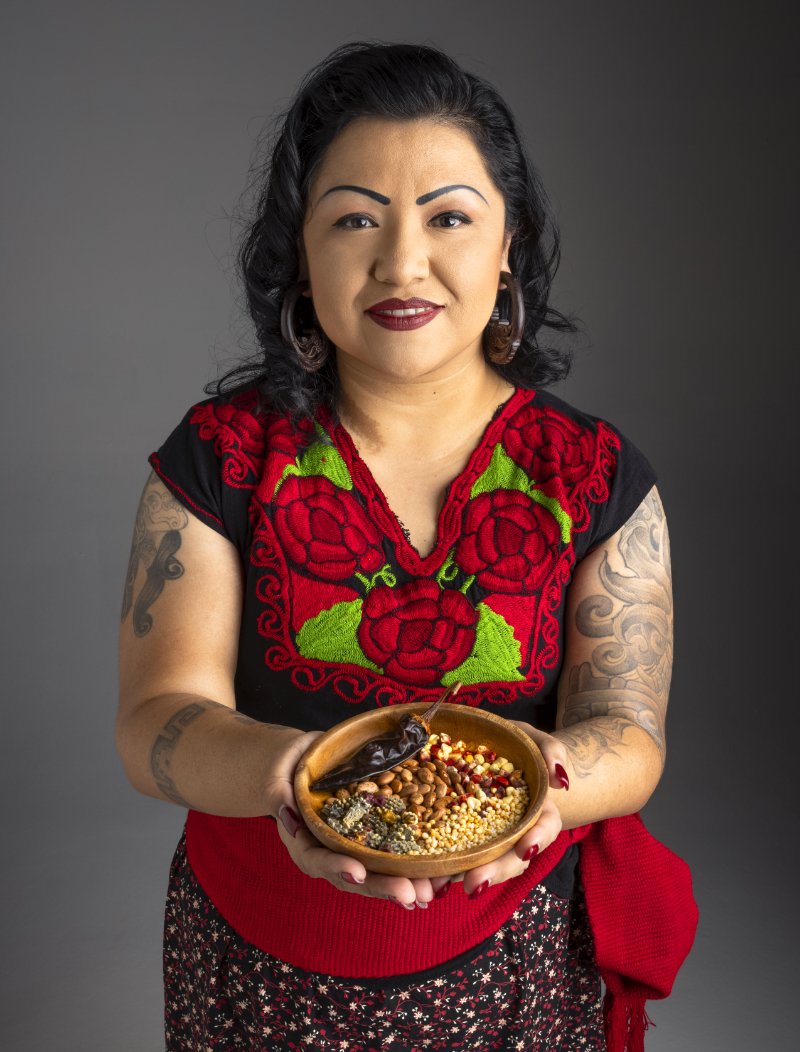 Cano started her journey by eating simple, ancestral foods including greens, nopales, mushrooms, and beans. She also started listening to the elders in her life; those who knew even more about traditional foods and traditional prenatal and postnatal foods and medicines.

“I want to make sure that what I put in my body is healing for me,” said Cano. “I know, as an Indigenous woman, anything can happen when I go into labor.” She’s familiar with the fact that American Indians face an elevated level of risk of mortality, second only to Black patients, when pregnant.

Her first birth took place without complication in 2012. And she’s now a mother of four and a founder of the Cihuapactli Collective (Cihuapactli means “women’s medicine” in Nahuatl), a group of women supporting and healing families and birth workers through story sharing, resource connecting, traditional Indigenous knowledge, and promotion of health and wellness. Cano hosts cooking workshops focused on food as medicine. She’s passing her knowledge to others who are pregnant because she recognizes that healthy food and traditional Indigenous food is extremely important during this time of life. But, just like herself, many Indigenous women and gender non-conforming people have had a wedge driven between these foods and their kitchens.

Through colonization, traditional foodways were erased from many parts of Indigenous life in North America. Poverty and food insecurity followed, as did diets dependent on processed, high-sugar, and high-fat foods.

On top of the other health disparities Native Americans experience, such as high rates of obesity and diabetes, pregnant Native Americans tend to have a poor-quality diet. That’s according to a 2019 study by the National Center for Chronic Disease Prevention and Health Promotion in which researchers observed the diets of 170 Native women in the Great Plains area. Researchers reported high levels of sodium and empty calories and a big deficiency in vegetable intake.

“Many times, you will see iron deficiency anemia in the mommas, a low hematocrit in our hemoglobin interbody, that’s what transports the nutrients through our bloodstream to all the individual cells,” said Suzanne England, a Great Plains-area maternal and child health consultant for the Indian Health Service (IHS), a division of the U.S. Department of Health and Human Services responsible for providing direct medical and public health services to Native people. “Women are fatigued, they’re tired; it puts them at risk of preterm labor, and most of us know about the consequences of being born prematurely.”

Those consequences can include long-term developmental and intellectual disabilities and physical problems with Indigenous children’s lungs, eyes, intestines, and teeth. While 10 percent of all babies are born prematurely in the U.S. (before 37 weeks of gestation), according to the National Center for Health Statistics, nearly 12 percent of Native American babies are born prematurely.

When a Native person becomes pregnant, England and other maternity caregivers offer them a healthy serving of nutrition education.

“Good prenatal nutrition is when women have access to food in [the U.S. dietary guidelines] and they’re meeting appropriate weight gain based on their individual health circumstances during pregnancy,” England said.

The IHS created “My Native Plate” in response to the USDA’s “My Plate,” the visual educational tool that uses a plate to illustrate recommended percentages of vegetables, fruits, grains, and protein. The Native version includes wild game, berries, corn bread, and squash and examples of other traditional foods such as wild rice, bison, and wild greens.

When vitamin supplements are needed, England says, they’re prescribed. If a person has health issues, like diabetes or high blood pressure, they’re referred to a nutritionist who can help with implementing a healthy diet.

“They come to us and we walk beside them,” England said. “We want to give them the control.”

Understanding this lack of access is key to helping pregnant people understand what they can do to make meaningful and attainable changes in their diets, England said. IHS also partners with nutrition supplement resources like Supplemental Nutrition Assistance Program (SNAP), the Women, Infants, Children (WIC) Nutrition Program, and the Food Distribution Program on Indian Reservations (FDPIR).

When it comes to accessing traditional Indigenous foods, England says, “People go hunting for deer, antelope, elk, prairie chicken; many people still gather the timpsila, which is a wild prairie turnip used in soups and stews; and make wasna with chokecherries, buffalo berries,” England said. “We try to incorporate that in the nutritional program.”

But like England, many nutritionists and dietitians who work within IHS are non-Native and not from the tribal areas they serve.

In a 2016 article by the Association of American Medical Colleges, Dr. Mary Owen, director of the Center of American Indian and Minority Health at the University of Minnesota Medical School, says she never saw Native American doctors and nurses while attending medical school. Natives were never in positions of power.

“We don’t own our own health care yet. We’re getting there, [but] we’re only going to effect change once we are at all levels of the hierarchy,” Owen added.

When it comes to food and nutrition, there’s a disconnect between Native patients and foreign specialists who may not understand the cultural and spiritual importance of some Indigenous foods.

Despite these systemic barriers, the choice to incorporate traditional foods into one’s diet is ultimately a personal decision and journey. Maria Parro Cano changed her diet for herself, her children, and her overall wellness. She sought out food knowledge from elders and others in her community. But not all Native American parents have access to that kind of knowledge, time, and culinary knowledge. 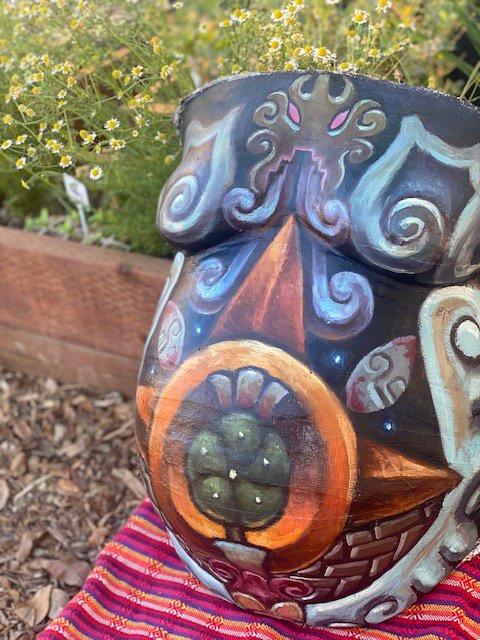 Nicolle Gonzales never wants to push a diet on the clients she sees through the Changing Woman Initiative, a nonprofit serving tribes in New Mexico that’s dedicated to renewing Indigenous cultural birth knowledge. She’s the founder and midwifery director; she’s also Navajo. She’d rather point to the need for larger systemic change.

“I just don’t want moms to feel ashamed if they’re obese, they don’t have access to [traditional and healthy] foods and they have to go to their provider and they’re breathing down their neck about how they need to lose weight or eat better,” Gonzales said. “Like many providers who serve our Native communities, they’re not from here. They are very unaware of some of these challenges of access and knowledge. I don’t think we need to be shaming our communities for not having the healthiest diets [or] perfect bodies, because this is all an impact of colonization and our resources being taken from us.”

Mental health issues and environmental impacts on Native life compound the problem—including lack of access to water and electricity in some places of rural Indian Country, Gonzales added.

Gonzales is actively learning about traditional Navajo foods and knows that the day when people in her community can easily implement a traditional diet are still a ways off. For one, knowledge keepers are not always accessible except when groups like the Changing Woman Initiative, Cihuapactli Collective, or other nonprofits or grassroots Native groups host traditional food classes or workshops.

Gonzales grew up on the Navajo Nation and ate many processed, convenient foods that were high in fat, sugar, and salt. As she made her way through college and midwifery school, she was introduced to a wide variety of fresh ingredients and flavors from other areas of the globe.

Now, her diet is made up of mainly fresh vegetables and proteins. She loves to cook and learn about Indigenous ingredients, like blue corn, and all the ways it can be used in breakfast, dinner, and dessert; a simple hot bowl of corn mush or as corn muffins, breads, or pancakes. And until there are meaningful and effective solutions that address the trauma caused by colonization around Indigenous food and nutrition, she hopes her midwives and prenatal clients will be inspired to cook and share knowledge about fresh, local, and traditional foods at the community level.

“We’re not going to change everybody at once, but we can make that change in ourselves one at a time,” Gonzales said.