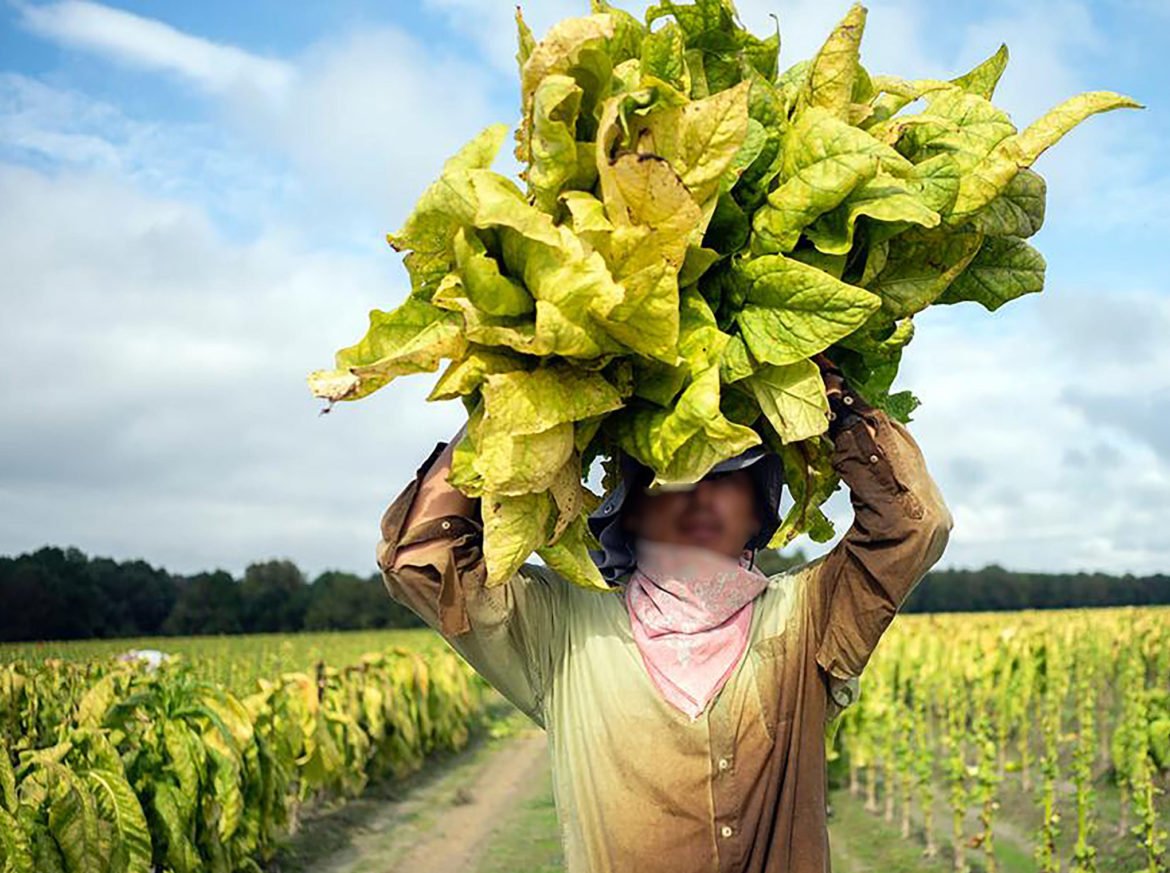 From 7 a.m. to 6 p.m. most summer days, the man battled the “green monster.” In the North Carolina heat and humidity, he and his fellow H-2A workers pulled large leaves off tobacco plants as tall as he was and deposited them in a truck bed. The workers risked absorbing the leaves’ nicotine into their skin, posing myriad health problems.

“I have seen my coworkers suffer from tobacco sickness. A lot of them get allergies, others get insomnia, vomiting, many get dehydrated,” said the Mexican worker, who asked to remain anonymous because he wants to continue being hired under the program, in Spanish. “There were times when the workers would need to go for IV drips at local clinics.”

More and more people have been exposed to the “green monster” in recent years. The total number of guest worker positions the federal government certified in the past five years almost doubled, from about 140,000 in 2015 to 275,000 in 2020. Many headed to North Carolina’s tobacco fields, according to U.S. Department of Labor data.

“I got to see a lot of (bad) things happening at that job,” the worker said about his three years in North Carolina tobacco fields. On top of the nicotine, pesticides sprayed on the plants pose health risks, too. “It is really not so much the work that exhausts you or tires you out, it is the chemical they put in the tobacco that makes you sick.”

North Carolina is one of the top-five employers of H-2A workers in the country. In 2015, the number of farmworkers who picked tobacco accounted for 21 percent of all guest worker positions in the state. In 2019, the latest year available, the figure was 48 percent.

Despite tobacco use decreasing, North Carolina grows more tobacco than any other state. After the 1998 master settlement with tobacco companies, the state’s industry consolidated, with fewer but larger farms, according to the Charlotte Observer. More farm workers were needed to keep up with production.

The H-2A worker from Mexico has handled different crops, but tobacco is its own beast, he said. “Me entabacose”—“I tobacco’d myself”—is a common phrase among farmworkers to describe the nicotine poisoning laboring in the fields can cause, he said.

Graham Boyd, executive vice president of the Tobacco Growers Association of North Carolina, described the sickness as unpredictable because it affects people differently. He said it’s similar to heat exhaustion.

“You might feel it today, you might not feel it again for a week or never again, or you could feel it multiple times in a row,” he said. “It has as much to do with the ambient temperature and dehydration as anything else. It might affect you, but some people are not bothered by it.”

Driving much of North Carolina’s tobacco industry is China, he said. During the COVID-19 pandemic, the country stopped buying tobacco, but its return to the marketplace will account for about a 30 percent increase in production volume this year, Boyd said.

As the state gears up for an increase in demand, more H-2A workers are expected to join North Carolina tobacco farms, he said.

The H-2A program has well-documented issues with exploitation and abuse of workers. Many H-2A workers are hired through labor contractors, who sponsor visas and then sell the labor to farms. Because workers’ time in the country is dependent on a single employer, workers don’t have much incentive to speak out about problems. Losing their visa status means losing their livelihoods.

FLOC has advocated for worker protections by filing lawsuits, but several years ago, the state took away one way it raised funds: A 2017 law outlawed farmers from voluntarily deducting union dues from workers’ paychecks. One of the main sponsors, Sen. Brent Jackson, owns a farm where two H-2A violations have been documented. (He didn’t return several requests for comment.)

If a problem arises, workers can complain to the authorities, said Lee Wicker, the deputy director of North Carolina Growers Association, a major H-2A employer. The government provides “tremendous oversight” to the H-2A program, and that means many workers are not afraid to complain, he said.

“This is not workers and farmers sneaking around in the dark hiding from the government,” he said. “Is it possible that some H-2A workers are afraid? Yes, it is possible. Is it widespread? I don’t think so.”

For the workers, the money keeps them coming back year after year. After working in North Carolina for three years, the H-2A worker landed a job this year on a New Mexico chili pepper farm. In late June, he was fired—wrongly, in his opinion—and he returned to Mexico.

To counteract the “green monster,” workers developed homespun remedies. They’d drink milk or lime juice to cleanse their mouths of the sour taste from working close to the plant, said a migrant farmworker from Guatemala. She requested to remain anonymous because she’s undocumented.

After more than a decade working in North Carolina’s tobacco fields, she experiences headaches and lung problems, she said in Spanish. The fields’ conditions can contribute to a person’s reaction to the tobacco plants.

Under the blazing sun for up to 12 hours a day, workers were expected to bring their own buckets filled with water and ice, and they had to be careful not to shock their overheated bodies by drinking cold water too rapidly, she said. Dehydration paired with nicotine poisoning and exposure to the chemicals used on the plants could be fatal, she said.

The H-2A worker said no masks were provided while harvesting to prevent inhalation of pesticides, and the workers were responsible for bringing their own gloves. When the tobacco plants were particularly wet after rain—increased moisture can lead the skin to absorb more nicotine—the workers would use garbage bags to cover up their bodies.

Beyond the health problems, both workers interviewed said they dealt with personally and witnessed abuse.

“One of the biggest abuses to workers’ rights was sexual harassment,” the worker from Guatemala said. It would mostly happen from the employers, the contractor and the drivers. “They would take advantage since they had to take people to work and return them to their homes.”

Under the H-2A program, employers must provide housing and transportation to the fields. Wicker said this increases costs for growers who would rather hire domestic labor.

The NCGA has been the largest H-2A employer in the country for more than a decade, according to the Department of Labor. In 2020, the association employed 10,650 H-2A workers, or 3.9 percent of all positions in the U.S. It provides labor to about 50% of North Carolina farms, Wicker said.

But the “cumbersome” process deters workers from filing complaints, FLOC’s Velasquez said. Investigations unfold too slowly for seasonal workers who often relocate to a different state or go back to their home country. And anonymity, which could protect those who complain, is almost impossible on crews of 10 to 50 people, he said. (A Department of Labor spokesperson said the identities of complaining workers are held in strict confidence.)

Although federal regulations exist for discriminating against workers who complain about stolen wages, Velasquez said the rules don’t work in practice because the U.S. Department of Labor cannot keep in contact with workers year-round to follow up on cases.

Depending on violations’ severity, an inspector can arrive at a farm anywhere from one-to-two days to a couple weeks. But, if a worker complains during the last week of harvest season, his division may not be able to conduct an “effective investigation” because workers may have already relocated, he said.

However, he said, complaints are filed away and will be investigated if similar violations arise for the same employer the next year. The state is responsible for complaints related to housing. Jennifer Haigwood, the spokeswoman for the North Carolina Department of Labor, said the agency’s six inspectors respond “to all valid complaints.”

“During investigations,” she said, “employees are provided with the inspector’s contact information in the event they want to contact the inspector after the on-site inspection." Regardless, to Velasquez, the system isn’t effective.

“It’s a laughing matter because no worker in his right mind is going to complain,” he said. “There’s no way to protect the workers from complaints and to protect them from retaliation.”

Ignacio Calderon contributed to this story.

This story originally appeared in Investigate Midwest, and is reprinted with permission.

Da Yeon Eom is an international scholar from South Korea. She earned her bachelor's degree in journalism from the University of Illinois at Urbana-Champaign and returned to her alma mater to gain a master's degree in journalism as a Hefner First Amendment Fellow. Throughout her education at Illinois, Da Yeon was involved in The Daily Illini, WPGU 107.1, Illinois Public Media, and Hear My Voice. Upon graduation, she worked at FleishmanHillard as a health and wellness team intern. She is interested in writing data-driven stories related to health, technology, and agriculture. Read more >