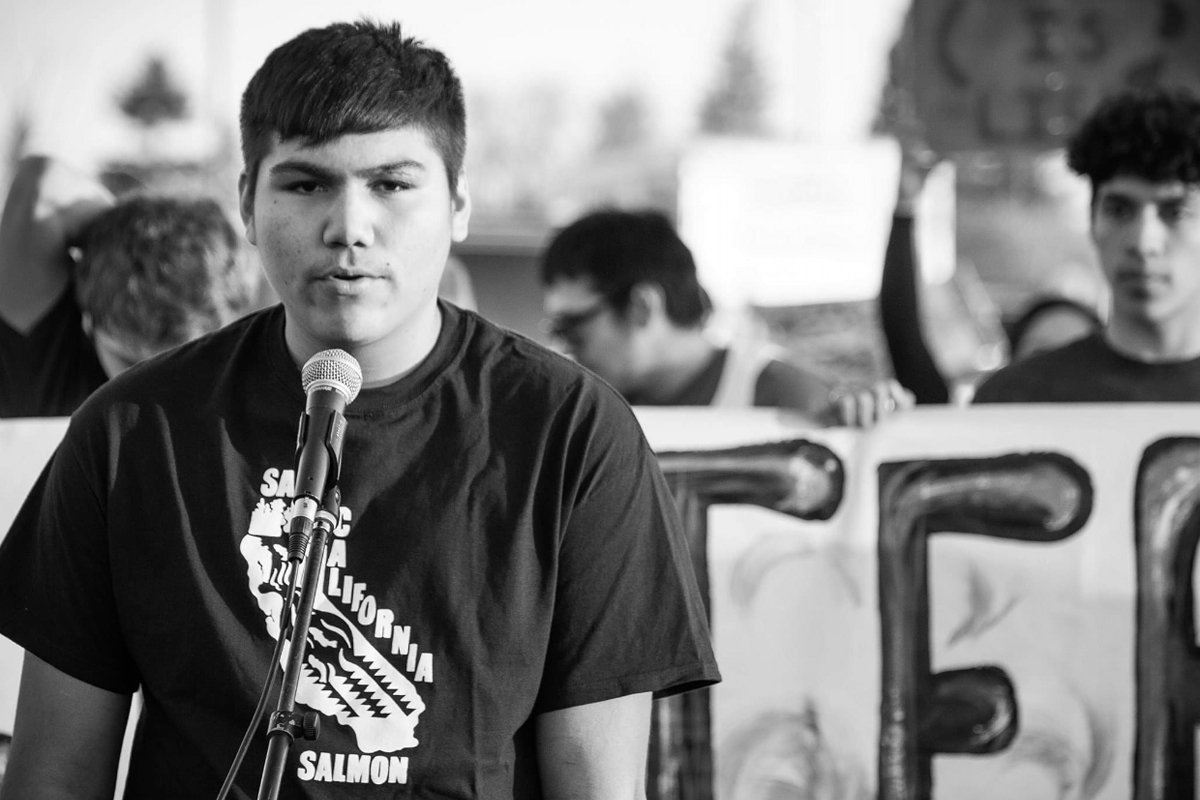 Seventeen-year-old Danielle Rey Frank was first drawn to activism in the sixth grade. As a member of the Hoopa Valley Tribe in what is now Humboldt County, California, she grew up on the Trinity River, which isn’t just a part of her Tribe’s food systems and livelihood, it’s also a sacred place that’s central to their ceremonies and traditions.

The Trinity and other area rivers have been consistently under threat from pipeline projects, along with rising water temperatures, pollution, and fish kills due to damming and water diversions from reservoirs and tunnels. All of which have been compounded by increasingly dire drought conditions.

After an elder from the nearby Yurok Tribe came to speak about these issues in her class, Frank knew she couldn’t afford to wait to fight for the future.

“This is our world,” she says. “We’ve already lost so much [oral history] with our parents and grandparents. If we lose our river, we don’t know who we are. We don’t know what will happen then.”

She started going to protests and hearings and speaking on panels about what was at stake. Then in 2018, when she was in high school, she helped form the Hoopa Valley High School Water Protectors Club to empower more youth to get involved.

The club, which now consists of roughly 50 Native students from the school, meets to connect to their cultural roots, write letters to policy-makers, and speak out at hearings and rallies. They were also largely instrumental in the creation of the new Advocacy and Water Protection in Native California High School Curriculum, released in March through Save California Salmon (SCS), a water advocacy group in Northern California.

Developed in conjunction with a coalition of other entities—including Humbolt State University’s (HSU) Department of Native American Studies, Klamath/Trinity Unified School District Indian Education Program, Blue Lake Rancheria, and the Yurok Tribe’s Visitor Center—the curriculum was made as an antidote to rising climate anxieties amongst youth and positions them as the leaders in the fight to protect their vitally important waterways, something tribes in North America have been fighting to protect for centuries.

“Our restorative environmental management and tribal place-based knowledge are best practices for climate resiliency. If we teach the next generation how to better manage and live with the land, they will become the leaders that can solve our challenges,” said Cutcha Risling Baldy, department chair for HSU’s Native American Studies Department, in a press release.

The Advocacy and Water Protection curriculum was initially inspired by a summer speaker series at HSU that featured Indigenous scholars, leaders, and activists across the state. Much like that series, the curriculum includes several video presentations from those speakers, along with study materials that cover environmental justice, Indigenous rights, community resilience, allyship, and youth activism.

Lessons also combine science, technology, engineering, art, and math (STEAM), utilizing traditional ecological knowledge, which has been acquired by Indigenous and local peoples over thousands of years through direct contact with the environment—something that climate scientists at the U.N. have acknowledged will be integral in the fight against climate change all over the world.

However, one of the curriculum’s focal points is the integrity of California’s rivers and the ongoing threats to salmon, currently facing extinction from climate change and water diversions. Those lessons teach about water policy and law, and cover current tribal battles over area water diversions such as the Delta Tunnels—a $15.9 billion project that would send significant amounts of water to farms in the Central Valley and Southern California—along with the movement by the Winnemem Wintu and Pit River Tribes to bring salmon back to the McCloud River, which were eliminated in 1945 with the building of the Shasta Dam.

So far, the curriculum and teacher’s guide have been downloaded by at least 600 educators across the country, and either used in full, isolated, or adapted to specific lesson plans.

“We have had teachers from Oakland with no Native students who are adapting the curriculum to [lesson plans about] refineries and fracking issues, which is really cool,” said Regina Chichizola, policy director for SCS. “They said they’ve been teaching about environmental justice for a while, but not from an Indigenous lens.”

In 2020, the youth of the Hoopa Valley Water Protectors Club saw how their voices mattered, when they demanded that Governor Gavin Newsom hold a hearing in the northern part of the state about the Delta Tunnels (now called the Delta Conveyance Project) and its potential to destroy their salmon runs. They succeeded in getting a hearing scheduled much closer to home—those meetings typically took place seven hours south, preventing many tribal members from testifying.

The hearing included many voices opposed to the tunnels, and was preceded by a rally with members of nine tribal nations that included emotional pleas from the youth in the Water Protectors Club. The young people learned from this event, as well as from SCS’s viral #undamtheklamath media campaign, about the importance of spreading the word through social media, and helped later formulate the curriculum’s media section about allyship and advocacy.

During the event, a number of Indigenous people—including Caleen Sisk, tribal chief of the Winnemem Wintu Tribe and a board member of SCS—chanted and sang traditional songs, which Frank said moved a lot of people to see a glimpse of what they’d be losing. The project has not been shut down yet and is currently under environmental review, but she said she and other youth felt that their voices were heard.

Sisk is also one of the leaders whose video presentation is featured in the curriculum, which focuses on the Trump Administration’s Water Plan, the Shasta Dam, and looks at how federal recognition is tied to the ability to access resources and support. Her tribe also has a separate fourth-grade curriculum on protecting salmon.

Included in that curriculum is the short documentary One Word Sawalmem, which is co-directed by and features Pom Preston, Chief Sisk’s son. The film is about Indigenous communities and their intimate knowledge about living in balance with the natural world. “Sawalmem” means sacred water, and Preston hopes that by sharing what he has learned about the land and its sacred value, he will inspire others to protect it in a deeper way. “People need to know the truth and that there is more going on in this world than we are being taught—and here’s the proof,” Preston told Civil Eats.

The climate crisis in California has made the need for action more urgent than ever before. In May, as fire season loomed, Governor Newsom declared a drought emergency in most of the state’s counties, eventually signing an executive order for the state’s population to reduce water consumption by 15 percent. In 2020, the state’s number of wildfires hit a record-breaking high with 9,600 fires burning over 4 million acres, and according to the Division of Water Resources, 2021 is shaping up to be the state’s third driest year on record, with numerous active fires burning since June.

The Yurok Tribe has already reported a massive juvenile fish kill event this year in the Lower Klamath. The news came a day after the Bureau of Reclamation, the federal agency that oversees water resource management, announced it would not honor the request of the Tribe to release more water flow to prevent the kill.

“Without the river in proper conditions . . . we’re not able to participate in our native culture the way we should be. . . . Our river is like a creek running through our reservation when it’s supposed to be the heart of everything. . . . We don’t even have salmon anymore. Our families used to catch 110 a summer, now we are lucky if we catch two,” Frank said at a recent hearing with the California Water Board.

Advocates at SCS have been critical of Newsom, accusing him of continuing to go along with the Trump administration’s Water Plan, which prioritizes big agriculture operations, and reroutes water to Central Valley growers, particularly almond farms, one of the state’s largest industries. In 2020, the U.S. Department of Agriculture estimated California was home to 1.6 million acres of almonds, with each acre requiring three to four acre-feet of water, which comes to roughly 18 percent of all diverted water used for state agriculture.

Reclaiming the Narrative for the Future

Almonds can be traced back to the Franciscan Padres, who brought them from the Mediterranean and were responsible for the construction of California’s missions, which, along with boarding schools, forced assimilation on Indigenous peoples, brutally stripping them of their languages, cultures, and often their lives, leaving in its wake decades of history books favoring settler colonialism that don’t tell these stories at all.

The creators the Water Advocacy curriculum were in part responding to a recent report by the American Civil Liberties Union that found school systems have been failing Native children across the U.S., calling out current education as a tool of oppression.

Standard curricula can demoralize Native youth, Risling Baldy told the North Coast Journal. “[W]e know that once they get [to school], they’re confronted consistently with people who question their own stories. It’s time to change that. It’s time to start at the very basis of the structural curriculum that we teach our youth, to tell them that their stories are important and matter, that their voices are important and matter.”

“[I want] tribal people in particular, but also non-Indian students, to hear that it’s not all historical trauma and we’re gone,” said Vincent Feliz in a short video from Humboldt State University’s Place-Based Community, an outdoor learning program that integrates knowledge from area Tribes. “It’s historical trauma, and we’re still here, and we’re not going anywhere.” Feliz is a Chumash lecturer in the Social Work Department at the school, which has a large Native studies program.

“By connecting local issues and environments to our education, and encouraging us to apply what we are learning to benefit our communities and California policy, we are helping to solve critical issues and getting students excited to learn,” says student Danielle Frank. “The curriculum educates us on how to sustain what we have left of the sacred world our ancestors left, while teaching what can be done to help revive it.”

Frank recently graduated, and she plans to continue an internship with SCS and find work in advocacy.

“I didn’t think kids belonged in politics . . . I didn’t think that we were educated enough on these topics to get up and speak our minds,” she added. “But, in reality, we are the ones that have to.” 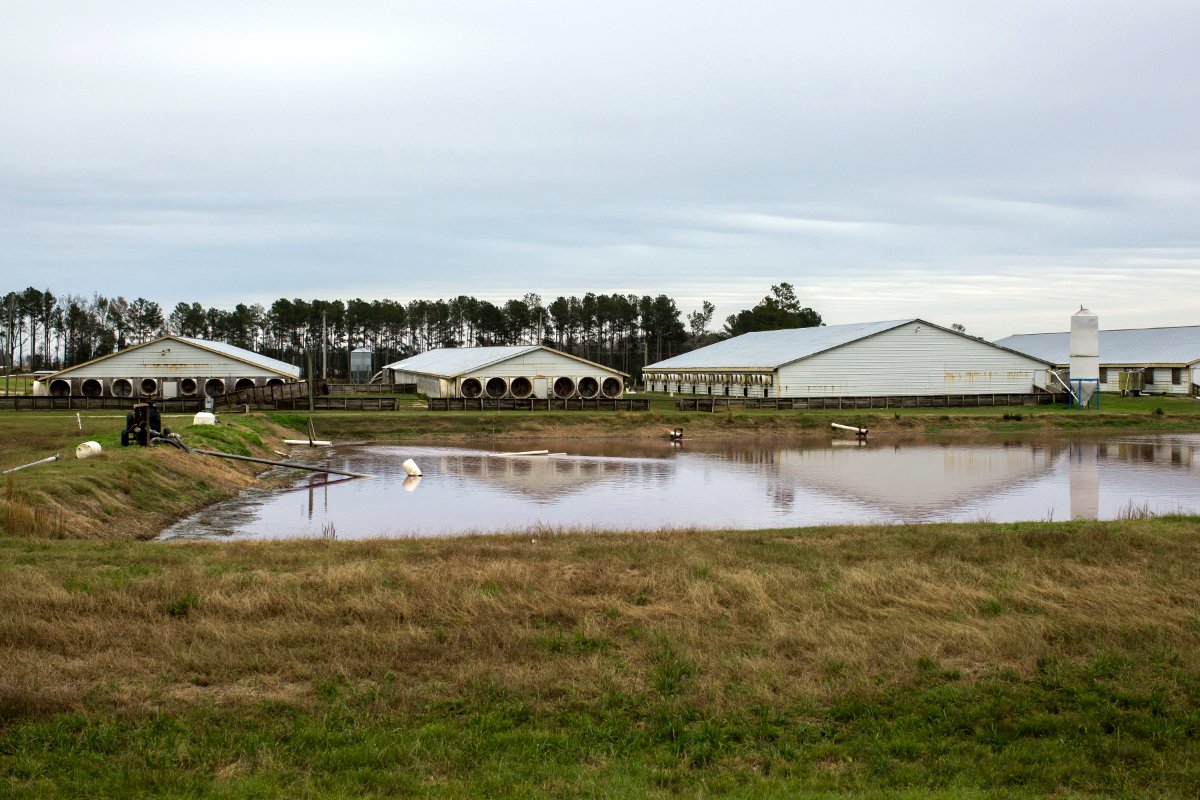