New research suggests that farmers who over-fertilize grassland crops like corn and wheat could face significant problems in dry conditions.

For decades, soil scientist Rick Haney watched farms—those he worked on, and those he lived near in Oklahoma and Texas—struggle to balance debt and drought, profits, and yields. “The farmers I’ve been around all my life are trying to hit a home run every year,” says Haney, who last month retired from a position researching fertilizer use with the U.S. Department of Agriculture’s (USDA) Agricultural Research Service, of the annual, high-risk drive to get a bumper crop.

“They only hit it one or two times a decade. I was watching these guys borrow a million dollars for cattle and plants that can die,” says Haney. “They can’t really control how much money they spend on equipment, or almost anything, but they still control how much fertilizer they apply.”

On most conventional farms, fertilizer is a necessity that allows farmers to maximize their yields year after year. But historically, their use has also created problems: fertilizers have facilitated large-scale monocultures, disrupted ecosystems, and largely minimized the need to monitor long-term soil health. And, on a practical level, over-fertilizing crops can lead to unintended consequences.

A growing body of research suggests that in addition to downstream “dead zones” and algae blooms, excess fertilizer can often also hurt crop yields, especially grass crops like wheat and corn, during droughts because of soil eutrophication—a buildup of nutrients that lets plants grow so quickly, they can choke themselves out.

Now, a new study published earlier this year in Global Change Biology provides further evidence that excess fertilizer applied during a drought year can create a boom-and-bust season because of the crops’ struggle for water. The study is part of an international collaborative experiment called the Nutrient Network (NutNet for short), which comprises a patchwork of 130 carefully monitored and managed grasslands across six continents. The project allows hundreds of ecologists, soil scientists, and agronomists to track ecosystem responses to climate change under different conditions around the world.

Does Fertilizer Help or Hinder Crops During Drought?

Globally, droughts and heatwaves are becoming more frequent and more severe, and the North American Great Plains are no exception. Already, the drought this year is shaping up to be one of the most intense in the High Plains since 2013, with 2018 as a close second. With grasses contributing a significant portion of the world’s food supply both directly and through grazing pastures, accurately predicting these plants’ responses to climate change is essential to global food security. One of the big questions at hand is how fertilizer affects grasses’ resilience to drought.

Soil scientist Kevin van Sundert is one of the experts on the case. He researches how grasslands respond to fertilizer and drought and was lead author on the study, which took advantage of NutNet’s existing monitoring stations to track grasslands’ response to the severe drought that baked much of Europe in the summer of 2018. The drought led to significant crop losses in Europe, but it also provided van Sundert an unexpected opportunity to compare how farmland with different fertilizer regimes fared in a real-world drought.

Because grasses have long been thought to be more drought-resilient than other plant types such as forbs (flowering herbs and legumes), van Sundert was surprised to find that fertilized grasses struggled to keep up when the drought hit. “This result came out that grasses are more sensitive to drought, so we need to figure out why this might be,” he told Civil Eats.

Grasses’ dampened response to fertilizer during drought is likely due to a lack of soil moisture. This may seem straightforward—of course there’s less water available during a drought—but here, fertilizer plays an important role. Fertilizers effectively remove nutrient limitation, allowing productivity to boom and plants’ biomass to increase. That increase in plant size is the effect farmers are counting on, but it can also lead to increased competition for water.

Just like a growing city drawing from a limited aquifer, a field with high biomass will increase its water demand, depleting soil moisture reserves more quickly than a field with smaller plants. During a drought, this phenomenon creates increased competition for limited water resources. That can be disastrous, particularly for a monoculture field, where the failure of one plant type means a serious financial loss.

Agricultural biologist Amber Churchill at the University of Minnesota, who was not involved in the study, put it simply. “Those bigger plants need more water,” she says. “That’s one reason why we might see this negative interaction between fertilization and drought.”

This negative effect has been demonstrated by research from NutNet before. A U.S.-based team in 2020 found a similar effect—biomass loss during drought, exacerbated by fertilization—in temperate grasslands in the U.S. Philip Fay, a soil scientist with the USDA, was involved in the previous study. Both studies, he said, suggest that over-fertilization during drought is a risk.

“There is a consensus that when you add nutrients to a system, it becomes limited by water,” Fay says. “That system, then, becomes more tied to changes in water variability.” Decreasing biodiversity by planting a monocrop, he adds, also removes a mediating buffer. “In a fertilized pasture where they use herbicides to knock out [weeds], they remove a potentially stabilizing diversity and increase the system’s tie to water availability.” 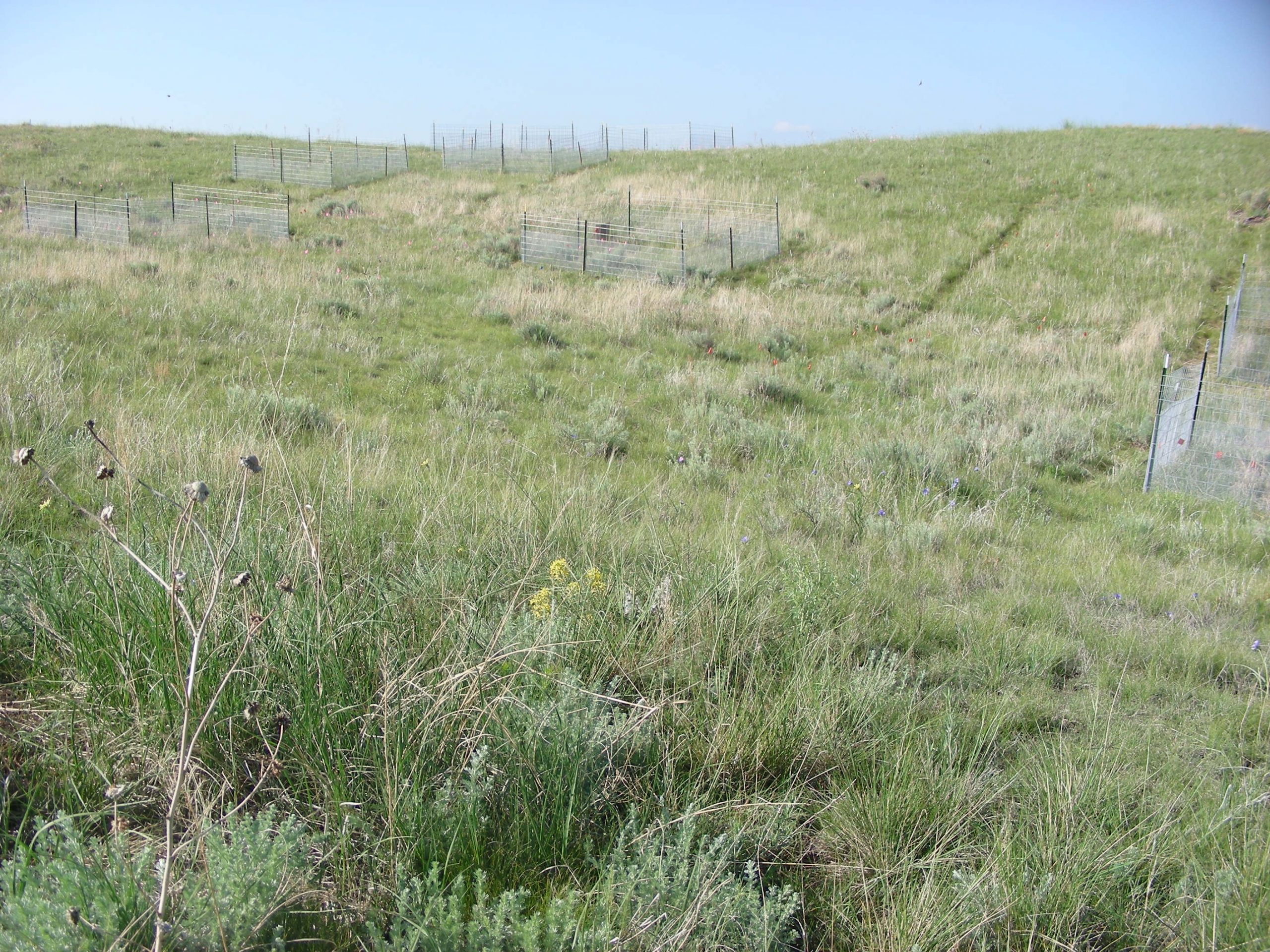 At Cedar Point Biological Station in Nebraska, patches of grassland underwent the same fertilization experiment as the European grasslands in the study. Over-fertilizing led to soil eutrophication for grasslands during drought in both areas. Photo courtesy of NutNet.

How Should We Fertilize In Hotter, Drier Climates?

How should farmers manage fertilize during periods of drought? Soil scientist Haney spends his days helping farmers answer that question. He’s been working to help farmers around the Great Plains implement long-term sustainability by optimizing their fertilizer use and focusing on overall soil health, as opposed to simply maximizing yields.

At the USDA’s Grasslands Soil and Water Research Laboratory in Temple, Texas, Haney analyzes fields’ soil chemistry, testing which nutrients are present to help farmers use only the amount of fertilizer their plants will realistically benefit from, without adding too much.

Over-fertilizing is very common in the Great Plains, he said, and the risks of doing so are clear. “Since there’s an 8,500-square-mile dead zone in the Gulf, I think we have strong evidence that we’re putting on too much fertilizer,” says Haney. Aside from the ecological impact, money is farmers’ main incentive to avoid over-fertilizing. Farmers often carry large debt loads and high financial risks, so saving anywhere they can is a necessity.

“In our lab, we average about $20 per acre in savings [for conventional farming]. For a farmer with 1,000 acres, that’s $20,000 that they didn’t have to spend on fertilizer,” he says. Scaling those savings up, over-fertilizing could be costing the Great Plains agricultural industry hundreds of millions of dollars every year. For an industry where drought is a huge economic risk, bringing down fertilizer use does double-duty: farmers save up front by buying less fertilizer, and they could be less likely to suffer crop losses if drought does hit.

Even though the ecological and financial costs of applying too much fertilizer are becoming clearer year after year, Haney says shifting away from a reliance on fertilizers is “like steering a battleship with a rowboat—it’s daunting.”

The U.S. fertilizer industry was worth $18 billion in 2020 and is projected to grow in the coming years. In many farm communities, fertilizer sales representatives are as ubiquitous as those selling seeds and pesticides.

Because chemical fertilizers have been so widely used for the last few decades, and because farmers often associate cutting their use with financial risk, it can be a hard sell. Conducting on-farm research and paying farmers for that research, Haney says, is one important way to convince them that it’s worth it, along with keeping much of the science focused on cutting costs.

In practical terms, however, Haney adds that keeping a longer-term focus on soil health may be the best approach to making crops and pastures resilient to drought. By incorporating multiple sustainable practices—such as planting nitrogen-fixing cover crops, reducing tillage, and introducing natural biodiversity—he says farmers can, over time, reduce their reliance on fertilizers and “get the soil system functioning again. That is the best defense against drought there is.” In years with “cooperative” weather, Haney says, the difference between a healthy and over-fertilized field may be minimal; conventional and sustainable farmers might see similar yields.

“But when a drought hits, that’s when the healthy soil really shines,” he says. “Soils managed with best soil health practices—using cover crops, no-till, etc.—are more resilient.” In North America, these are practices that extends back to Indigenous growers planting the Three Sisters (corn, beans, and squash) together to manage the soil, with no need to add fertilizer. Nutrient-building cover crops and crop rotation rely on similar agroecological principals.

Van Sundert, Churchill, and Fay all arrived at similar conclusions: While there’s no one-size-fits all solution to fertilizers in drought, healthy soil and a biodiverse ecosystem is a powerful mitigator of grassland and crop resilience. Fay, who is hesitant to make prescriptive conclusions based on the study alone, allows, “It’s just like dealing with other aspects of climate change: conserve. Use good stewardship. In the end, that’s what needs to be done.”

Rebecca Dzombak covers the natural world in the Anthropocene, as well as what came before us. Find her on twitter @bdzombak or at rebeccadzombak.com. Read more >