Providing free meals to all students is important, but kids also need a school food program that addresses historical discrimination, celebrates diverse foodways, and creates a more just future for our children.

The call for universal school meals—free for every student—is picking up steam. Like many of the existing inequities illuminated over the last year, access to school food has taken center stage, and federal lawmakers have put forward a pair of bills to make the temporary move to allow free meals throughout the pandemic a permanent policy. Meanwhile, California and Maine are poised to become the first states in the nation to adopt universal school meal policies at the state level (following the cities of Chicago, Boston, and New York).

And while access is critical, it’s not the only factor that matters.

Think about a time when a meal brought you joy. What was on the plate? Where were you? Who were you with? I’ve opened many workshops with these questions and they often prompt beautiful food memories for participants. Recently, I’ve ended the exercise with the question, “How many of you thought about school lunch?” I’ve asked hundreds of young folks and adults, and I’ve never had anyone respond with a yes.

For almost a decade, I’ve worked to design more enjoyable school meals. And while the impacts of a good school meal experience can be profound, they’re also not common. In fact, many students opt out of school meals all together. Why are so many of our children choosing hunger over school meals? The answer is simple and yet complex: They are responding to a system that was never designed for them.

As we begin to explore public policy that expands universal access to school meals, this is the time to think intentionally about what aspects of the National School Lunch Program we carry into the future forward and which pieces we leave behind.

First, let’s consider the origins of the program—and rename it. It was created after the passage of the Richard B. Russell National School Lunch Act of 1946, and for the last 75 years, we have gradually modified a school food system named in honor of the man who designed it. Richard B. Russell was a staunch segregationist and well known for inhibiting the Civil Rights movement in the United States during the decades he served as a U.S. Senator from Georgia (1933–1971).

School meals are a significant institution in our country; however, the original design failed to confront racial segregation in the educational system, causing many schools be prevented from accessing food, labor, and other kitchen resources from the beginning. Enforced equal access to a free school meal program didn’t happen until the late 1960s, when the program transitioned from local and state oversight into a program with national income standards for free and reduced-price meals. Hungry kids have a harder time learning, and generations of Black children were blocked from accessing subsidized and affordable school meals.

Although the school meal program has undergone multiple regulatory changes over the years, children and school food workers are still experiencing the lingering effects of the initial design. With a new name, there is an opportunity to acknowledge and address the inherent discrimination of the original program that still impacts the programs of today.

Second, let’s stop striving for “adequacy” with the food that we serve. On California’s meal program page, for instance, the word adequate is used nine times to describe the type of meals that must be provided to our children. What if we were to have legislation and policies that required meals to be nutritionally excellent? What would change about the standards and the required quality of food if we were to consistently provide meals that celebrated the complexity and diversity of our children? Adequacy isn’t an aspiration of a society that wants its citizens to thrive. We must question why we have set the policy bar for our school food system at adequate, and then actively address what we can do to dramatically raise the bar.

Case in point: While I was working with a school food program at a midsize school district in California, the district adopted a strong, values-driven wellness policy—a common approach to updating school meals from within a district—that led to improving the ingredients we used. But it wasn’t easy. At one point, we had to temporarily remove beef from the menu because the USDA-approved, adequate pre-cooked beef that we had access to and could afford had caramel color added to it, and that additive had been banned by the policy. (Pre-cooked beef was necessary due to lack of cooking equipment in our school kitchens due to historical underinvestment since the 1970s.) Fortunately, the district also had a skilled school food-service director, and access to additional monetary funds to buy cleaner, less processed food. But that kind of change is not happening everywhere. And, thus, adequacy means very different things in different districts.

The food we serve in schools needs to be exceptional—in quality, in flavor, in sourcing and presentation. Adequate school food has been the result of large-scale dumping of commodities, and has therefor helped prop up the industrial farming system for decades and has allowed a proliferation of processed and packaged foods on the lunch tray. We can do better for our kids. An exceptional school lunch is sourced from diverse farmers and ranchers who are stewarding the land sustainably and treating their farmworkers with dignity. It is culturally relevant and cooked with care, and it is provided in dignified dining environments by school meal service workers who are being fairly compensated for their meaningful work. An exceptional school lunch provides joy for all who are involved, from seed to table and nourishes our environment for generations to come.

Third, let’s question why we have children who are hungry in one of the wealthiest countries in the world. A useful thought exercise when thinking about creating a new system is to consider what would need to happen for the current system to no longer exist.

For decades, school meals have been used year-round to fill significant nutritional gaps for low-income families. What would need to happen for that to shift? Why do we have childhood hunger and poverty in this country? What societal investments are needed in order for families and schools to no longer bear the burden of hunger? If we make those investments, we could actually create a school food program whose primary purpose is to celebrate, nourish, and care for our children. Such a program would be a community good—an expected resource in a country that aspires to value and invest in its diverse communities inside and outside of schools. If we embrace a lens of community care in designing a new school food system, the positive effects will reach well beyond the tray.

With reflection, learning, and intentional redesign, we can create new systems that are relevant, equitable, and meaningful to our diverse 21st-Century students. It is time to design and implement a new, universally free school food program that encourages participation, celebrates the diverse foodways of our nation, and provides well-paying jobs to those who take care of our most precious population: our children. Their dignity and wellbeing must be at the center of every experience that is created to serve them. Designing systems that impact our communities is a profound responsibility with generational repercussions.

As we expand and/or implement new policy, we also must understand the history of legalized harm that allowed centuries of oppression, discrimination and inequitable investment in Black, Indigenous, and people of color (BIPOC) communities. Accounting for this harm will require substantial and intentional funding and policy support. Our past choices have a cost that must be accounted for as we build something new.

The 1946 Richard B. Russell National School Lunch Act needs to be reckoned with, in name and in policy. We cannot continue to use and invest in systems that are entrenched in the values of the past and expect to produce new outcomes. As a nation, we have the profound opportunity to create a school food system that acknowledges our past and creates a more dignified future.

Angela McKee-Brown is the Executive Director of the Edible Schoolyard Project and a former Civic Innovation Fellow at the Stanford d.school. Read more > 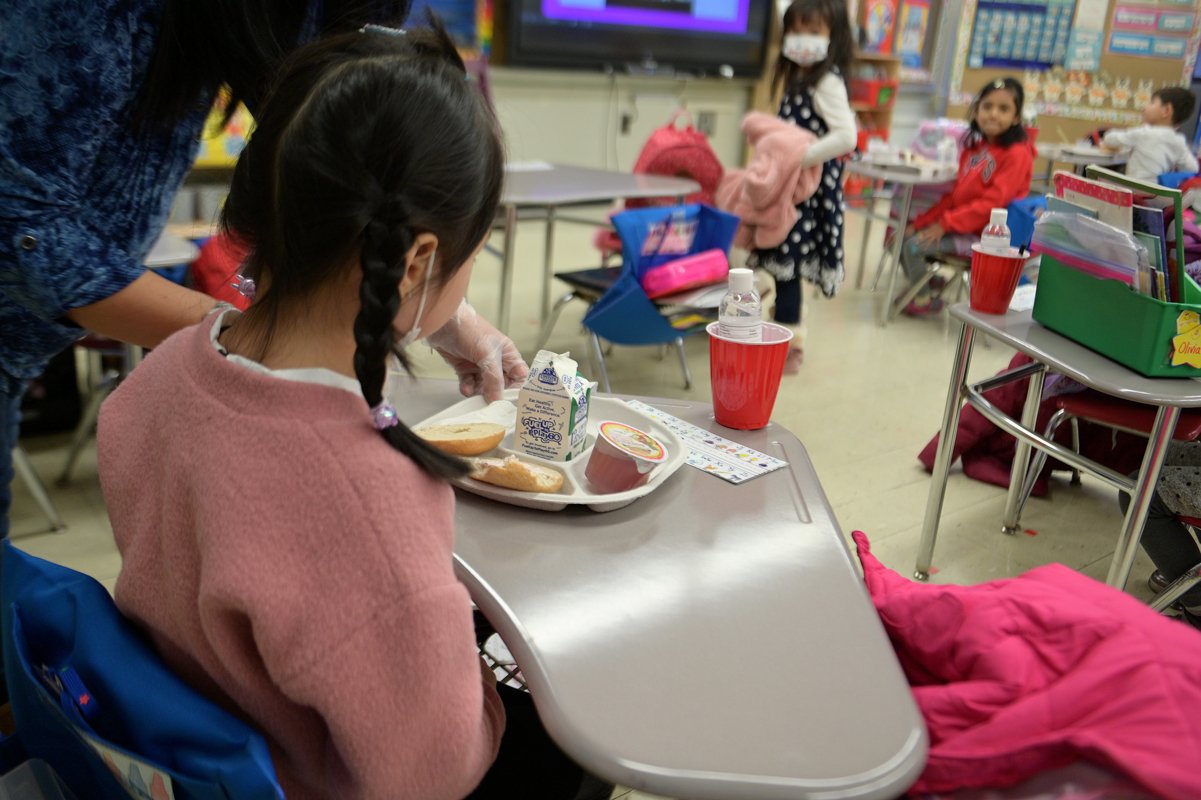