‘We are here to redefine what the family farm means, what the for-profit farming model looks like, and redefine what a human centered approach to farming can really be.’

Pride Month is a time to honor those who have struggled for queer and trans liberation. It isn’t just about the freedom to hold an LGBTQ+ identity, but also uprooting the unjust systems that hinder people’s ability to thrive. In its place, many queer and trans farmers and land stewards are building a new system in how they choose to grow food, build community, and organize their labor.

Hannah Breckbill, the founder of the 22-acre farm Humble Hands Harvest in Decorah, Iowa, uses queer as a verb: “To queer something is to question norms and assumptions about it, and then to reshape it to meet our needs better.”

For Breckbill, this involves breaking away from many assumptions inherent in production agriculture as it’s practiced on most U.S. farmland. This includes pernicious ideas like: “the only way to access land is to inherit it or marry it,” “everything on a farm has to be profitable and efficient,” “farmers have to have a second job,” and “to be a good farmer you have to work yourself into the ground,” she wrote in an e-mail. Breckbill has moved away from these norms by establishing a worker-owned cooperative, setting healthy work boundaries to allow everyone involved to live full lives, and engaging in farming practices that rebuild healthy ecosystems. As she sees it, all of these choices reflect a queer ethic.

To be sure, today’s queer and trans farmers aren’t reinventing the wheel. Rather, “The ancestors of queer, non-binary, women, Black, people of color were farmers, growers, plant nurturers, they were land shepherds, they were in reciprocal relationship with land and nature,” Chris Bouza, the co-founder of Finca Morada, a Queer, Trans, Black, Indigenous People of Color (QTBIPOC) cooperative house, urban farm, and art collective in Miami, told Civil Eats. “Connection with land is in our blood and lineage.” 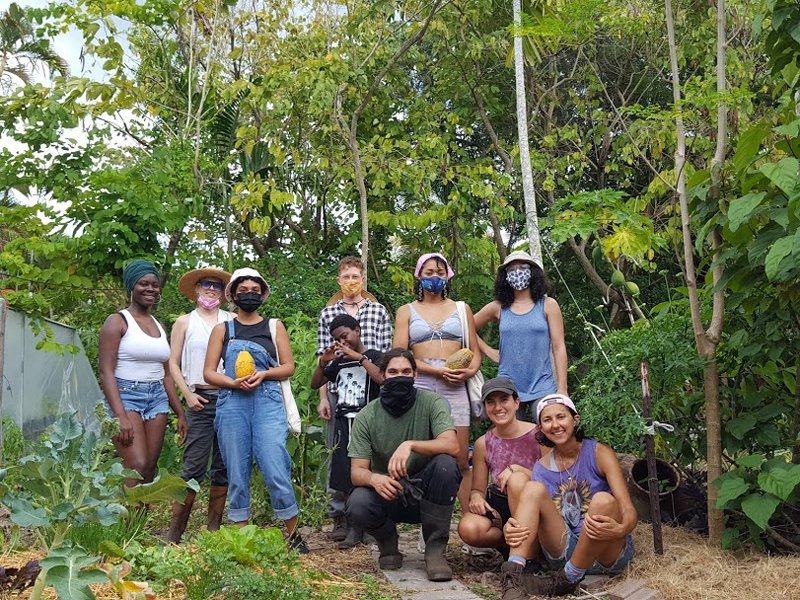 To honor this vital work, we compiled a list of queer- and trans-led farms and land projects to support this Pride Month, and every day of the year.

Tenacious Unicorn Ranch is an anarchist, trans-owned alpaca ranch and safe haven from the cis world in rural southern Colorado and beyond. “It helps heal the soul in a way that is immediately noticeable in people when they get out here, see this queer liberation, and feel it in their bones,” said Bonnie Nelson, who co-owns the ranch with Penny Logue. They raise nearly 200 alpacas, alongside sheep, goats, ducks, cats, chickens, and puppies named after Star Trek characters, and welcome volunteers.

Idyll Dandy Arts (AKA Ida), nestled in the wooded hills and hollows of Tennessee, is a communal land and educational project dedicated to creating a “world within a world, where ideas and marginalized LGBTQ+ people can flourish.” They engage in a non-hierarchical consensus model to govern their community and tend to the largely forested land and farm. They welcome visitors through artist residencies, garden interns, skill shares, and events, and prioritize sharing and exchanging their knowledge with the surrounding community.

Hocus Pocus Farm is a queer and women-owned farm that grows flowers, herbs, and vegetables, that they sell wholesale and through a sliding-scale community-supported agriculture (CSA) program. The 1-acre farm is part of the Osamequin Cooperative Farming Project, an incubator that leases land to young and beginning farmers in southeastern Massachusetts. “I have all these values and ideas about the world that have a lot to do with like my queerness, like anti-racist, anti-capitalist work,” said Sasha Wolfe, one of the farm’s co-owners. “[Farming is] just about putting those ideas into practice.”

Finca Morada is a queer and trans BIPOC cooperative house, arts collective, and urban farm in Miami, Florida. “At our heart-center is environmental, racial, LGBTQ, gender, social, and food justice, inspired by nature’s magic, radical interdependence and wild diversity,” say the founders on its website. During the pandemic, the members shifted to growing food for the community and partnering with other local justice-focused groups. As the founder of the food justice collaborative Grow Roots Miami, Finca Morada members also build free edible home gardens for the local community, with a mission: “Growing our own food is community care; it’s liberation; it’s revolution; it’s our protests put into tangible, healthy action!” 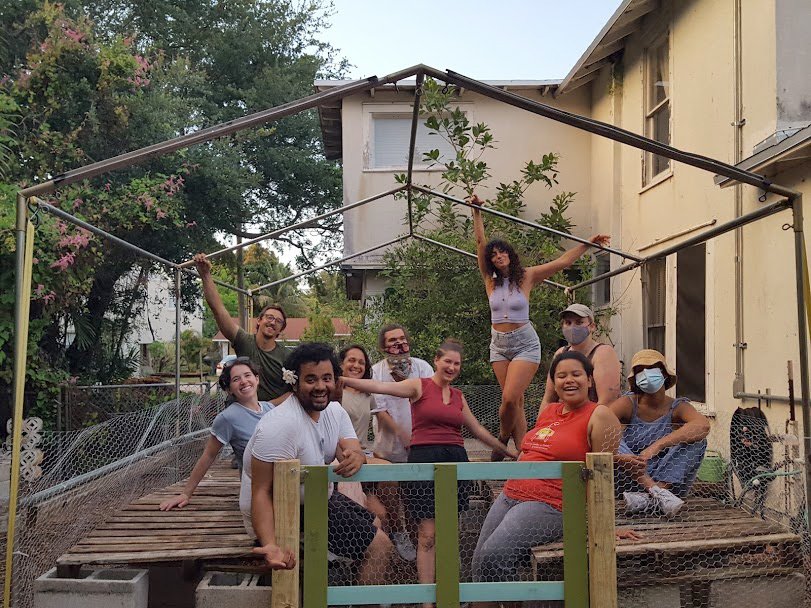 Milkweed Farm is a queer-owned diversified flower and vegetable farm in Guilford, Vermont. Founded by Jonah Mossberg, they feed their neighbors through a CSA, collaborate with other farms, and donate part of their proceeds to social justice organizations in Vermont. “Growing food and tending land is a way for queer folks to build sovereignty and resiliency in a system and society that often otherwise makes it difficult for us to do so,” said Mossberg in a recent e-mail. Recommended viewing: Mossberg produced the documentary Out Here on fellow queer farms in the U.S.

Radical Family Farms, founded by partners Leslie Wiser & Sarah Deragon, is a chemical-free, no-till regenerative farm in Sonoma County, California, dedicated to “reclaiming Asian American identities on the land and centering LGBTQIA+ mixed-Asian American heritage and culinary culture.” The farm operates a CSA that delivers Asian heritage produce boxes and flowers in Wiser and Deragon’s local community as well as to members in the Bay Area.

Truelove Seeds is a Philadelphia-based seed company that specializes in rare, open-pollinated, and culturally important seeds, especially those that hold significance for refugees and immigrants to the U.S. Founded by married couple Christopher Bolden-Newsome and Owen Taylor, the company partners with more than 20 small-scale farmers along the eastern seaboard, including Rise & Root and Milkweed (both on this list). Bolden-Newsome and Taylor also co-host the podcast “Seeds & Their People,” which features the farmers, gardeners, and seed breeders in discussions about the lineage and future of the food system.

Humble Hands Harvest is a queer, worker-owned cooperative that produces organic vegetables, sheep, pork, fruit, and tree nuts on 22 acres of land in northeast Iowa. Hannah Breckbill and her second cousin Emily Fagan host a Queer Farmer Convergence, which is “a gathering to build community among queer farmers and to reflect on and interrupt racist, capitalist, and heteropatriarchal legacies in U.S. agriculture.” They are currently fundraising to build a house and community space on the farm. 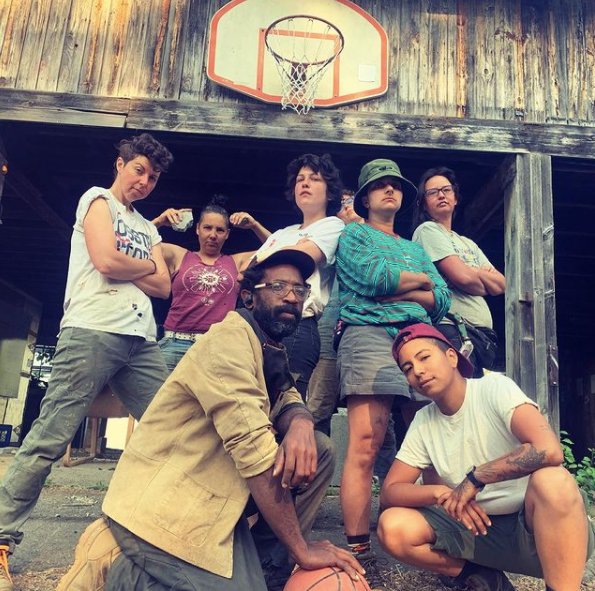 Rise & Root Farm is a five-acre farm in the lower Hudson Valley dedicated to food justice. The farm is cooperatively run by five women of multiple racial and LGBTQ identities, including urban farming veteran Karen Washington. Lorrie Clevenger, one of the farm’s founders, described her vision for the farm, in a 2017 Civil Eats article, as acknowledging the “U.S. history of exploitation around agriculture and is choosing to create something different.” For Clevenger, this includes fair wages and inclusivity, welcoming anyone to the farm.

Queering the Farm, founded in 2020 by Zaba Ángel, is a collective of queer, trans, Two-Spirit, Black, Indigenous, and People of Color (QT2BIPOC) land stewards in Albuquerque, or unceded Tiwa land. “I was living on a farm in South Valley and I felt like I had an opportunity to share the resource with the QT2BIPOC community. I wanted others to have the access to farming, land, and community during COVID,” Angel told Civil Eats in an e-mail. The collective’s seven organizers plan work parties on each other’s land, which includes a farm and other projects.

Rock Steady Farm and Flowers is a queer-owned and operated farm in New York’s Hudson Valley that is “rooted in social justice, food access, and farmer training.” Owners Maggie Cheney and D. Rooney, and a team of farmers run a 500-member, sliding-scale community supported agriculture program (CSA) that feeds members in their local community and New York City. “What we are building at Rock Steady rarely exists,” said Cheney, who hoped to create a safe space they hadn’t been able to find in the food movement. “We are here to redefine what the family farm means, what the for-profit farming model looks like, and redefine what a human centered approach to farming can really be.”