‘Percy vs. Goliath’ Is a Cautionary Tale of Corporate Control in Agriculture | Civil Eats

A Canadian-American director with roots in the civil rights movement spotlights the seed sovereignty maverick who took on Monsanto in the 1990s.

Christopher Walken as Percy Schmeiser in a still from Percy vs. Goliath. (Photo courtesy Saban Films)

In 1998, Percy Schmeiser, a canola farmer on the plains of Saskatchewan, Canada received a letter from the agricultural biotech company Monsanto, claiming that he was growing its patented seeds in his fields without a license. Genetically modified (or GMO) seeds were relatively new to the market, and the company’s Roundup Ready canola was resistant to Roundup, the herbicide Monsanto also sold. The new seeds came with the promise of increased yields and reduced pesticide use.

But Schmeiser and his wife, Louise, were seed savers, and unlike more than hundreds of other farmers threatened with a corporate lawsuit, they didn’t settle. Instead, they fought for the right to grow their own seed, claiming that the genetic material from Monsanto found on their farm had blown there on the wind. Their court battle reached the Supreme Court of Canada, resulting in a split decision. It upheld Monsanto’s intellectual property rights requiring the Schmeisers to surrender their 50-year seed stock, but the court ruled that the family owed the company no damages.

The feature film, Percy vs. Goliath, released today in theaters and streaming, dramatizes the couple’s six-year struggle against the multinational corporation, which was purchased by Bayer in 2018. Academy Award-winning actor Christopher Walken plays the stoic Schmeiser (who passed away in October 2020), Roberta Maxwell co-stars as his tenacious wife, and Zach Braff plays their determined lawyer.

The movie opens with the ferocious windstorm that may have transported the GMO seeds to the Schmeisers’ farm and Percy and his farmhand race to save their own seeds before they blow away. The scene suggests that the epic force threatening the survival of family farmers is not nature itself, but the corporate control of agriculture. “These companies are going to swallow us up,” Percy says.

The filmmakers took some creative liberties in making Percy vs. Goliath, including the creation of a fictional anti-GMO activist played by Christina Ricci and a cameo by seed sovereignty activist Vandana Shiva. Although the question before the Canadian courts was limited to patent infringement, the scope of the film is sweeping, including GMO seed contamination, pesticide impacts on health and the environment, farm economies, and corporate ownership of living plant material.

Genetically engineered food crops, including corn, soybeans, potato, and papaya, have been deemed safe to eat by the scientific community but they remain controversial for many environmental advocates, who see them as enabling vast tracks of commodity monocrops, creating a pesticide treadmill caused by the growth of herbicide-resistant weeds, and increasing overall pesticide use around the world.

Meanwhile, the majority of the U.S. seed supply is controlled by just four companies, 90 percent of all canola seeds are now genetically modified, and cross-contamination threatens non-GMO and organic seed production in the U.S. For the last several years, Bayer has been mired in court cases over its herbicide dicamba and the ongoing lawsuits linking glyphosate, the active ingredient in Roundup, to non-Hodgkin’s lymphoma.

The film’s director, Clark Johnson, is widely known as an actor who played high-profile roles on The Wire and Homicide, and he recently directed the feature films S.W.A.T. and The Sentinel. He spoke to Civil Eats about what attracted him to this quiet story about a Canadian farmer and why the questions it raises about agriculture still resonate 20 years later.

You are best known for detective series and crime dramas. What drew you to this story, wherein nobody dies? 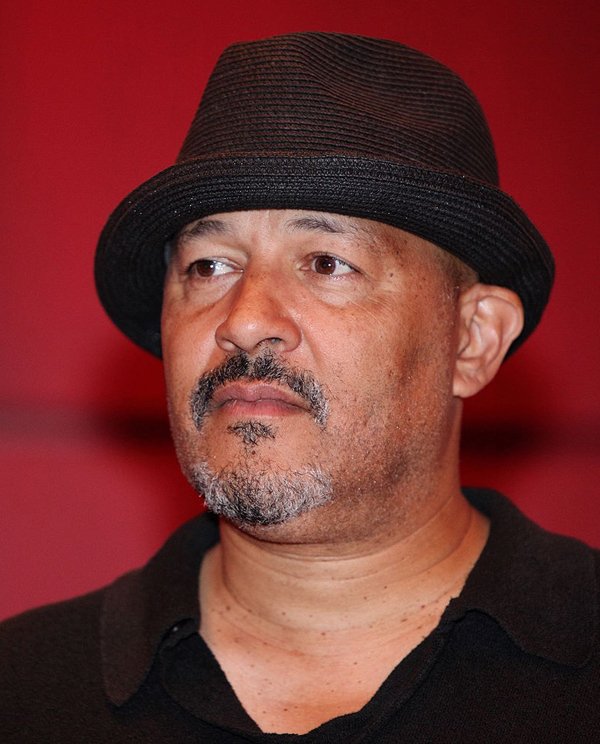 I do a lot of cop dramas and it’s fun to do big action movies, but the first film I directed—that got any notice—was Boycott (2001), which is about the birth of the civil rights movement. My next movie is my parents’ life story. We had to move to Canada when we were kids because my parents were involved in the movement with the Student Nonviolent Coordinating Committee (SNCC). And as a kid, [we] rode around in freedom rides and went to peace marches and stuff. My three siblings and I didn’t get to taste grape jelly or lettuce for the first few years of our childhood because of Cesar Chavez’s [boycotts]. So, that’s the kind of thing that I was raised with. But I was drawn to Percy’s story because I knew nothing about it. I didn’t even know what canola was.

So, how did a drama about agriculture lure major film stars like Christopher Walken, Zach Braff, and Christina Ricci?

Because it’s compelling and it’s a true story based on real characters. They weren’t going, “Oh, that guy that does all those cool cop dramas, he’s going to nail this canola movie.” The actors responded to the story and then they responded to how I was going to tell it.

The film’s storyline begins and ends with the Schmeisers’ legal battle with Monsanto between 1998 and 2004. Why do you think this family’s story is still relevant today?

This was pre-internet, mostly. [Percy and Louise] licked stamps and sealed envelopes and responded to everybody that offered up money as word got around through the farming community that they were being bullied by Big Agribusiness. We found a great, sixth-generation farm in Manitoba [to shoot the film] It is organic and they don’t use GMOs at all. And it was really inspiring to tell the story of the Schmeisers on a family farm. There is some relevance to the idea that GMOs can make things better. They were just saying, “We didn’t steal your copyrights.” They just were defending themselves and their honor.

There is some lingering controversy within the farming community over whether the Schmeisers knowingly planted the contaminated seed. The court Supreme Court of Canada stated that Percy was not “an innocent bystander,” yet the film paints him as the victim. Why is Percy the hero of the film?

I wouldn’t have done the movie if I didn’t believe the Schmeisers. They used to weed around the telephone poles, the hydro poles, because that’s where the weeds were. [Percy] noticed that the canola was thriving with the weeds. And he said, “Oh, these are great seeds.” And he used the seeds from that acre. Now, when you get an acres’ worth of canola seeds and save them to seed your land next year, they call that infringement. To me, it was like a no brainer that he wasn’t saying, “Hey, I got free seeds!” 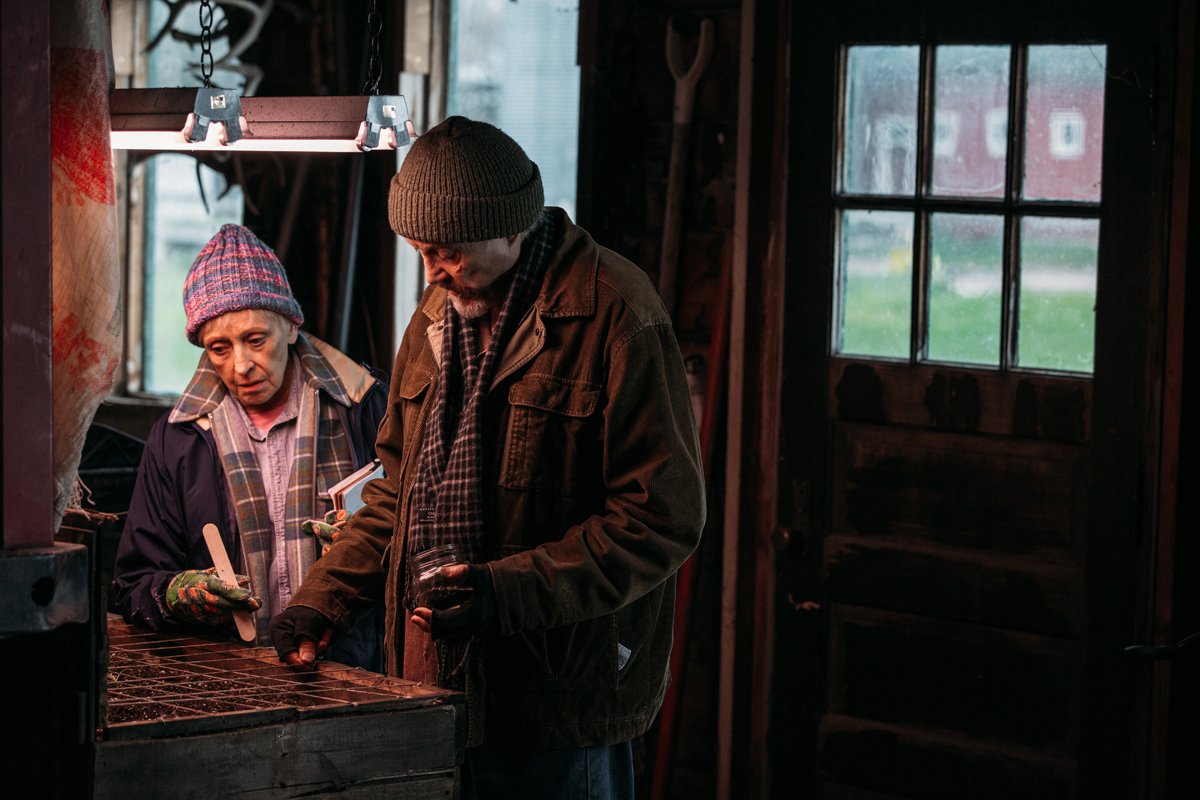 Roberta Maxwell and Christopher Walken in a still from Percy vs. Goliath. (Photo courtesy Saban Films)

What takeaways about GMOs did you want your audience to leave the film with?

Well, you can just rip it from the headlines that Bayer is dealing with billion-dollar lawsuits because people are getting cancer because they use Roundup. We’re in a challenging time on a number of levels because we are trying to get ahead of nature. I get it. We want to feed the world.

That’s why I didn’t want to just say Monsanto was evil and that’s all there was to it. [I wanted] to open up a dialogue about where their responsibility lies. Their scientists are world-renowned and come up with great ideas that can make farming more practical. Especially now, when so many people [face] food insecurity in the world, I’m happy to find something that we can feed everybody [with]. But you gotta be careful how far you go with that.

After its release in 2020 in Canada, Percy vs. Goliath was painted in some in some circles as an anti-GMO film, but it doesn’t sound like you were saying that at all.

Well, I am in that we’re talking about this particular farm and these particular people and the reaction to them and the battle they took on. You know, Percy II could go into show the Monsanto side, but I’m not interested in doing that. They got people for that. We’re telling the story of how he dealt with their attack. I don’t know that much about Monsanto. I know a lot about big business and big government. As I said earlier, I come by my feistiness and my civil disobedience honestly. And so I’m happy to tell his side of the story.

It’s hardly a whodunnit, so how did you frame this patent infringement lawsuit for a movie-going audience?

Right. We joked about shooting in Canada. The pickup trucks that are stalking him around all the time, keeping an eye on him—he drove them through a mud puddle and got them stuck. Now, [if it was] an American version, the S.W.A.T. version, he would have had a shotgun and gone out in a gun battle. So, it’s not an action movie, but neither was Erin Brockovich. This is a story about one guy going up against a monolith. So, we didn’t rip pages from the headlines, we ripped pages from the court cases.

Did you actually use some of the legal arguments from the trials?

Oh yeah. I mean, if we had changed a comma, the Monsanto lawyers would have been all over us.

Since the Schmeisers’ case wrapped up in 2004, so much has transpired around Monsanto, including the acquisition by Bayer, and the USDA label on bio-engineered food that becomes mandatory on January 1, 2022. Are you at all concerned that this film might seem like old news?

Not at all. I think it’s an “I told you so” moment. The repercussions are being felt right now . . . [farmers] take their spreaders blast that [Roundup] all across their fields. And it doesn’t just stay on the canola, it gets into your kitchen, into your kids’ bedrooms . . . that is no joke. So, it’s a cautionary tale.

Oregon’s Seed War: Can Vegetable Crops and Canola Coexist in the Seed Capitol of America?