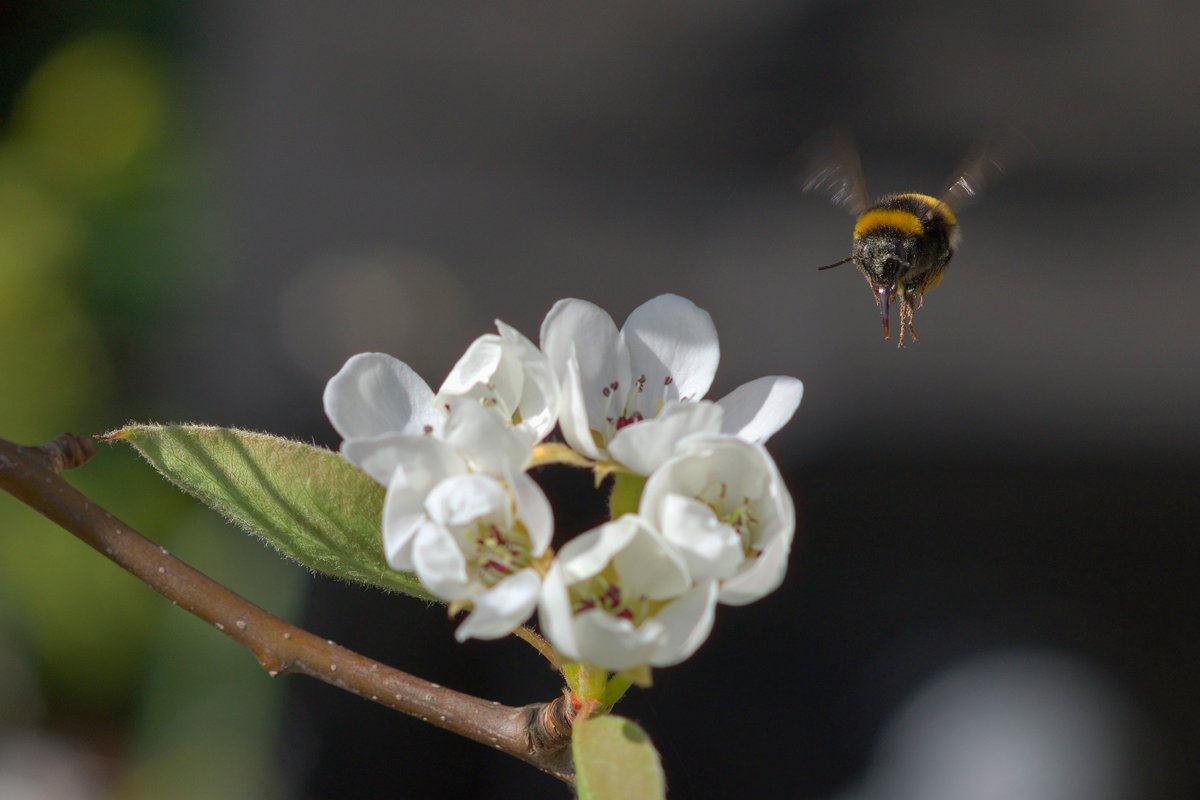 In January, a coalition of scientists from various academic and conservation organizations sent a letter to the U.S. Department of Agriculture (USDA) asking the agency to take action on an unexpected threat to local ecosystems: bumble bees.

The authors urged the agency’s Animal and Plant Health Inspection Service (APHIS) to start tracking movement of commercial bees throughout the United States. Doing so is critically important, they wrote, because commercial bumble bees have been implicated in spreading pathogens to a variety of wild bee populations and driving the decline of several native bumble bee species, as well as threatening the pollination networks that keep us fed.

“As diseases have been shown to move . . . between bumble bees and honey bees . . . the potential for bumble bees to serve as disease vectors threatens a wide array of pollinating insects,” the letter concludes. “Agriculture that relies on pollination is at risk throughout North America because of unregulated trade and movement of bees.”

Pollinators are essential to putting a wide variety of nutritious and affordable food on the table. And while research is showing that wild bee communities play a significant role in this process, American agriculture continues to rely on managed bees to do the important work of pollinating massive acreage of food crops.

Honey bees are by far the most common commercial pollinators, with 3 million colonies reported in the U.S. last year. But they’re not the only bees employed commercially, nor are they the most effective pollinators in many cases. Bumble bees are commonly used with crops such as berries, melons, peppers, and tomatoes because their ability to buzz pollinate, or shake the pollen from the flowers, makes them more effective. It’s estimated that around 140,000 colonies of just one particular kind of bumble bee—Bombus impatiens, the common eastern bumble bee—were sold for tomato production in 2010. The two main companies rearing and selling bumbles in North America are Biobest USA, Inc., and Koppert Biological Systems.

“It’s a small enough industry that it’s not on most people’s radar,” Jamie Strange, chair of the Department of Entomology at Ohio State University and lead author of the letter to APHIS, told me by phone. “And most people would say, ‘Oh, it’s a bumble bee. What’s the harm?'”

But these scientists and advocates aren’t concerned about bumble bees generally. They’re worried about the impact of managed bumble bees, which have been reared in captivity and shipped en masse to farms all around the country. Any organism moved beyond its native geography runs the risk of having detrimental impacts on new locations. And the human activity of management magnifies this risk by conferring competitive advantages to commercial bees of all kinds.

Honey bees aren’t native to North America and their commercial use is raising significant ecological concerns. However, bumble bees pose a more nuanced challenge. There are around 45 species of bumble bees native to various parts of the U.S. and Canada—and only a few of those are suited to commercial rearing and systemic pollination. And yet, even these North American bees have had detrimental impacts.

The decline of several wild bumble bees has been linked to commercial bees. In the late 1990s, a dramatic increase in the fungal pathogen Nosema bombi among wild bumble bee species coincided with an outbreak of the same disease among the commercial stock of Bombus occidentalis, the western bumble bee. This outbreak was implicated by scientists at the Xerces Society for Invertebrate Conservation in the rapid disappearance of three other types of bumble bees: the rusty patched bumble bee (now listed as an endangered species), the yellow-banded bumble bee (recently rejected for endangered status), and Franklin’s bumble bee (now believed to be extinct).

Research has also shown that wild bumble bees collected near greenhouse operations using commercial species are more likely to be infected with pathogens than those collected at locations further away. In theory, bumble bees used for greenhouses stay confined to the structures. In reality, unless growers take particularly vigilant precautions, bees can exit and enter through doors, vents, and gaps around windows.

In Chile, two types of European bumble bees introduced for agriculture have led to the decline and local extirpation of the only native Patagonian bumble bee, as well as the spread of non-native plants, nectar robbing, and flower damage. It’s unclear what the ripple effect of such changes to local ecosystems has been or will be: The loss of even more local species? Disruption of the existing connections between pollinators and plants? A weakened resilience to other stress factors?

According to the letter, there’s currently no mechanism for tracking commercial bumble bees from where they’re raised to where they’re shipped in the U.S. Consequently, if a new disease outbreak were to occur or local pollination networks were disrupted, there would be no way to trace those impacts or hold companies accountable.

“Now, we—the scientific community, the conservation community, the farmers—have to deal with and pick up the cost of that invasion,” Strange says. “And do we have anything that we can do to recoup those costs?” Unfortunately, there doesn’t appear to be.

Eventually, however, APHIS stopped exerting regulatory control and left it to the states to make their own decisions about importing commercial bumble bees. In 2010, the Xerces Society petitioned APHIS to resume regulating the industry because of the connection between commercial bumble bees and the severe decline of native species. Xerces had substantial conversations with the agency between 2013 and 2014. But APHIS appears to have abruptly ended the dialogue, continuing to leave the issue in the hands of the states.

Few states actually have restrictions on the types of bees that can be used for agricultural purposes. Oregon prohibits the use of non-native bumble bees. California limits the use of the non-native common eastern bumble bee to greenhouses and requires colonies be destroyed at the end of the season. Washington state is now considering a bill that would restrict the use of non-native commercial bumble bees—specifically in response to the establishment and continued expansion of a wild population of the common eastern bumble bee in the Northwest.

“We don’t yet know the downstream impacts of that on native populations,” Strange told me. “But we’ve now unleashed this thing and there’s no way to go back and reconstruct which company it was that was shipping them in.”

I reached out to Biobest and Koppert repeatedly to discuss the concerns presented in the letter and to learn how they might be addressing the possible environmental risks; neither company responded. This is probably not surprising. Strange has participated in many bumble bee working groups over the years with other scientists, government officials, and industry representatives. He says that when asked for information regarding the sales and movement of their bees, the industry reps have claimed that the information is proprietary and have been unwilling to share.

According to their websites, both Biobest and Koppert sell the common eastern bumble bee. It’s the only species that Biobest offers in the U.S., while Koppert also offers a species native to the West Coast. Both companies have statements on their product pages advising customers to check with their local authorities before buying the bees. On just two of its four product pages, Biobest also states, “B. impatiens is not authorized for outdoor pollination in the West Coast areas of Canada and USA.”

When I reached a sales representative for Biobest, they told me that the company will ship the common eastern bumble bee to western states for indoor use only. The indoor colonies come fitted with a queen excluder—a small plastic device that reduces the size of the exit hole to prevent the queen from escaping and establishing a wild population. A sales representative at Koppert refused to supply similar information about where the company ships its bees.

A Regulatory Nudge Toward Accountability

This might be the most concerning thing of all: the industry’s lack of transparency and apparent unwillingness to be open with the public about their business. The fact is we don’t know for certain how harmful commercial bumble bees currently are. But the information that could help build a better understanding can only come from the companies themselves: How many bees are they producing and shipping? Where are the bees being shipped to? What are the companies doing to ensure their bees are relatively free of disease and pathogens? When an industry feels no obligation to help the public understand the harm its businesses may be causing to local communities, then that industry requires a firm nudge toward greater accountability.

The current regulatory framework for honey bees in the U.S. provides only limited help when thinking about how to address commercial bumble bees. At both the federal and state levels, honey bees are regulated as agricultural commodities. The USDA’s role is limited to the importation of bees from other countries. Oversight of movement between and within states is left to the states themselves, which has resulted in a wide variety of rules and enforcement. The USDA does, however, conduct an annual survey of honey bee operations regarding the number of colonies they maintain, the number of colonies they lose, and the factors contributing to those losses. Strange and his co-authors are asking for similar data collection with bumble bees.

At the beginning of February, APHIS responded.

“We understand and appreciate your concerns on this complex matter affecting pollinators,” the agency wrote in its own letter. However, APHIS is delaying any immediate action on the request.

According to the letter, APHIS has set up a scientific working group that is looking at the risks associated with the interstate movement of honey bees. The results from this group, which should be available this year, “will be directly applicable to bumble bees, since many diseases and pests are shared between them.” The agency is also anticipating a white paper in the works by Strange and other researchers about developing a program to ensure that commercial bumble bees are free of disease and pathogens.

“As this additional information and analysis becomes available, we will take your request under consideration,” the agency response concluded. APHIS will need to “carefully consider and evaluate what measures are warranted,” as well as determine what actions “are within the scope of our regulatory authority” and “what resources could be available to support such a program.”

Will the agency’s careful consideration happen in time to avoid possible damage and disruption in the future? Because the current lack of public accountability is exacerbating the ecological risks that managed bees can pose to the wild pollinators and the pollination networks we all rely on.

“I think a lot of us are waiting for the next bad thing to happen because it’s been long enough now that it ought to,” Strange says. “I don’t know if we have a pathogen on the horizon, but we definitely have a pattern of risk developing.”

Matt Kelly is an independent journalist based in the Finger Lakes of New York. He is the creator and editor of the Bee Report. He is also the director and producer of the recently-released documentary film, the Bees of Grand Staircase-Escalante. Read more >