Like many experiencing the cold, snow-filled days of a pandemic winter, Alexis Nikole Nelson dreams of spending warm days by the seashore. But her beach wanderlust isn’t merely about swimming and sunbathing; she also wants to forage for seaweed.

“I absolutely love this one particular kind of seaweed, bladderwrack,” said 28-year-old Nelson, who lives just outside of Columbus, Ohio, and spends most of her free time either searching for and gathering food or researching edible plants. “When it’s dried, I blend it up with salt. It makes things taste a little meaty, a little cheesy, [and] not particularly fishy. I’ve been finding all kinds of really fun ways to use it, and now I’m like, ‘Well, I’ve got to find a ton more of it this year.’”

Nelson’s interest in finding the seaweed in its natural environments is more than personal. She hopes to share it on the social media platform TikTok, where she’s teaching nearly half a million people how to identify, harvest, and prepare everything from sumac to acorns to ginkgo nuts—all while presenting an alternative to the mostly white-male image of modern foraging.

This isn’t the kind of trendy foraging you see in high-end restaurants and pricy classes geared toward finding dinner in the woods. Nelson’s brand of foraging is geared toward curious people with time on their hands and an interest in gaining a deeper knowledge of the world around them. And it’s just one sign that the practice of foraging has exploded in popularity in the past year as the pandemic has fueled concerns about finding affordable, healthy food.

“I’ve always foraged to some extent,” Nelson said, “but on a whim, when the shutdowns started happening last March, I made a one-off video and was like, ‘Hey everybody, you’re probably a little afraid of going to the grocery store—me too! Here are five super common, edible plants easy to identity that are definitely in your neighborhood.'”

Nelson works in social media marketing and had started a TikTok account to learn how to use the platform for her job. In the early spring, most of her videos were getting a couple of hundred views. But when she opened the app a few days after posting her first foraging video, it had 40,000 views.

@alexisnikoleIf you watch this video you will survive, like, 2 extra weeks when the apocalypse happens I PROMISE ? #greenscreenvideo #xyzbca #foraging #comedy♬ original sound – Alexis Nikole

Bringing a BIPOC Perspective to Foraging

Foraging has recently emerged as a specialized hobby people engage in on the weekends or while on vacation; some even pay hundreds of dollars for foraged foods at restaurants like Noma in Copenhagen. But foraging is deeply rooted in Black, Indigenous, and People of Color (BIPOC) culture.

“For a lot of Indigenous and Black families, getting stuff that was growing around was just part of the normal deal; it wasn’t a cool, niche hobby,” Nelson said. “As a Black woman, I just want to yell into the heavens about how accessible this information should be and how accessible so many of these foods are.”

While there isn’t much detailed national data on who is foraging, Marla Emery, a research geographer with the U.S. Department of Agriculture (USDA) Forest Service, estimates that more than 20 percent of people in the U.S. and Western Europe take part in foraging. That number is in line with what’s been reported in other recent journal articles that also suggest that foragers represent a much more diverse demographic than is often showcased. 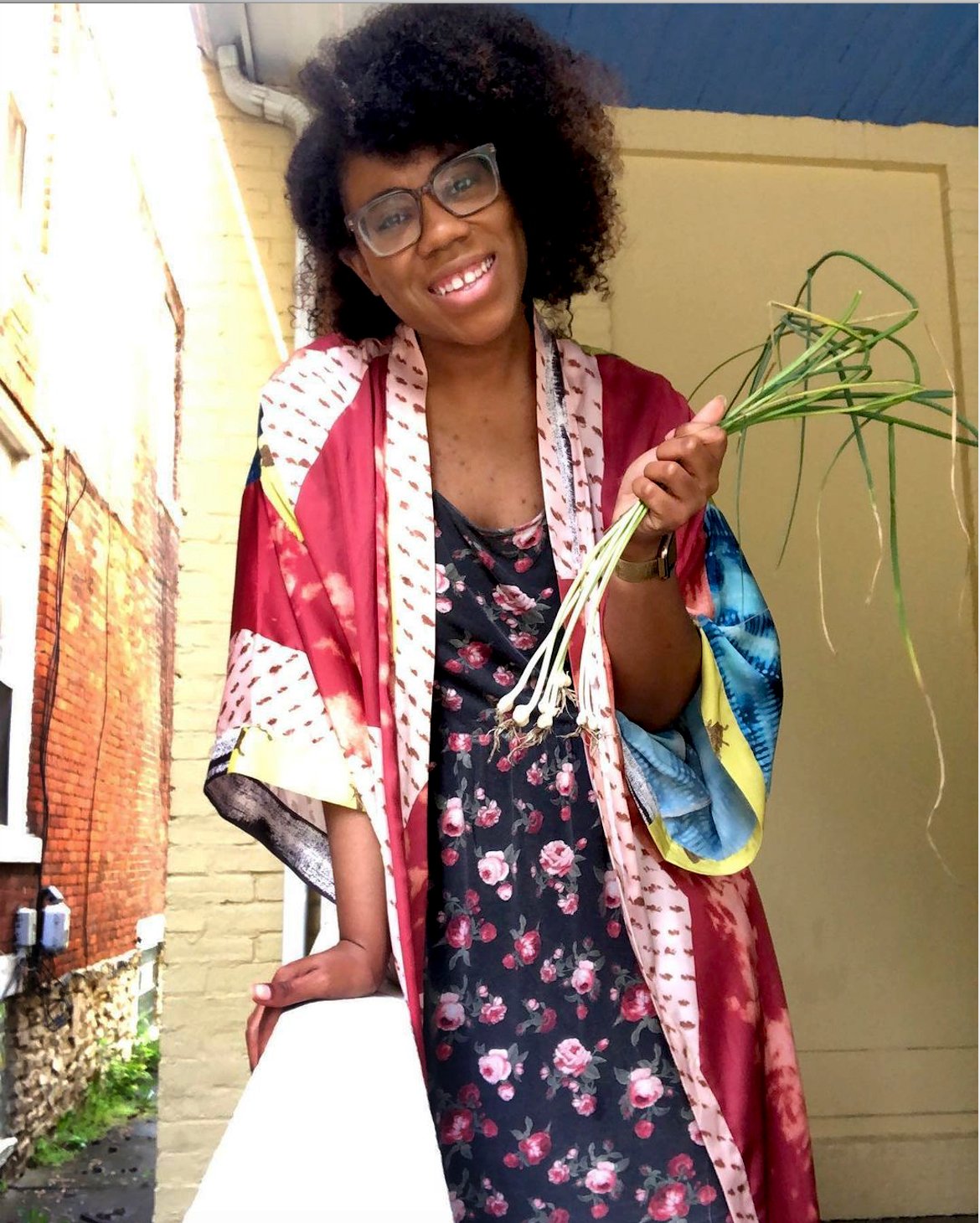 Alexis Nikole Nelson with some field garlic bulbs for braiding.

When she first started sharing her videos, Nelson said she’d have people asking other foragers—usually male, usually white—to fact-check the things she was saying. “It was infuriating, like, ‘Why can you take their opinion at face value, and why am I the one who needs a double-check?’” Nelson said. “I definitely think a lot of people don’t necessarily expect a Black woman to be knowledgeable in this space, and I’m hoping that I’m doing some of the work to break that down.”

Through her videos, Nelson hopes to help expand the images that come to mind when the word “forager” is used, and to show younger people of color that they too can forage. Most of her videos focus on either the ease of finding food, suggesting to her audience they’ll be able to delay going to the grocery store, or how easy it is to make everything from tea to dessert to full-on meals from foraged foods.

Nelson grew up in Cincinnati learning about plants in her mother’s gardens; as they worked the soil together, her mom would quiz her on the flowers and trees she was growing.

“Every once in a while, my mom would say, ‘Well, this is a weed but you can use it for cooking if you want.’ All the cool, organized gardening stuff didn’t stick with me, but the propensity for identifying plants did,” she recalled.

She’s been building up her knowledge of foraging ever since. As she grew up, she’d spend summers at overnight camps in the forests, and she’d store away knowledge camp counselors passed on about sorrel and other wild things they came across during the day, waiting until she was home to research those plants.

“It’s been a really slow build of knowledge ever since I was like a really little kid,” Nelson said.

While her mom used gardening to unwind from work, Nelson uses foraging, making it a part of her routine. Most of the year, she’ll forage every day after work in her neighborhood, planning longer excursions to national forests and the Massachusetts coast where she visits family during time off.

In her videos, she’ll share what she finds and how she uses it. Nelson has demonstrated making molasses from wild berries, sweets from flowers, even steamed dumplings from mugwort, salted mustard garlic, edamame, and salted dried ramp leaves.

While she forages less during the winter months, Nelson often reads and studies up on edible plants. She has also begun paying a lot more attention to environmental pollutants, like the herbicides sprayed in parks and other places she goes looking for edible plants. It all started when she began monitoring water quality reports before gathering seaweed.

“Any time you’re gathering from the sea, you have to pay so much closer attention to water pollution and water safety levels,” she said. “But when you’re in any kind of maritime setting, especially where fishing is prevalent, information about water quality is readily available. And that has made me take a step back and consider the safety of everything I’m gathering, regardless of where it’s coming from.” 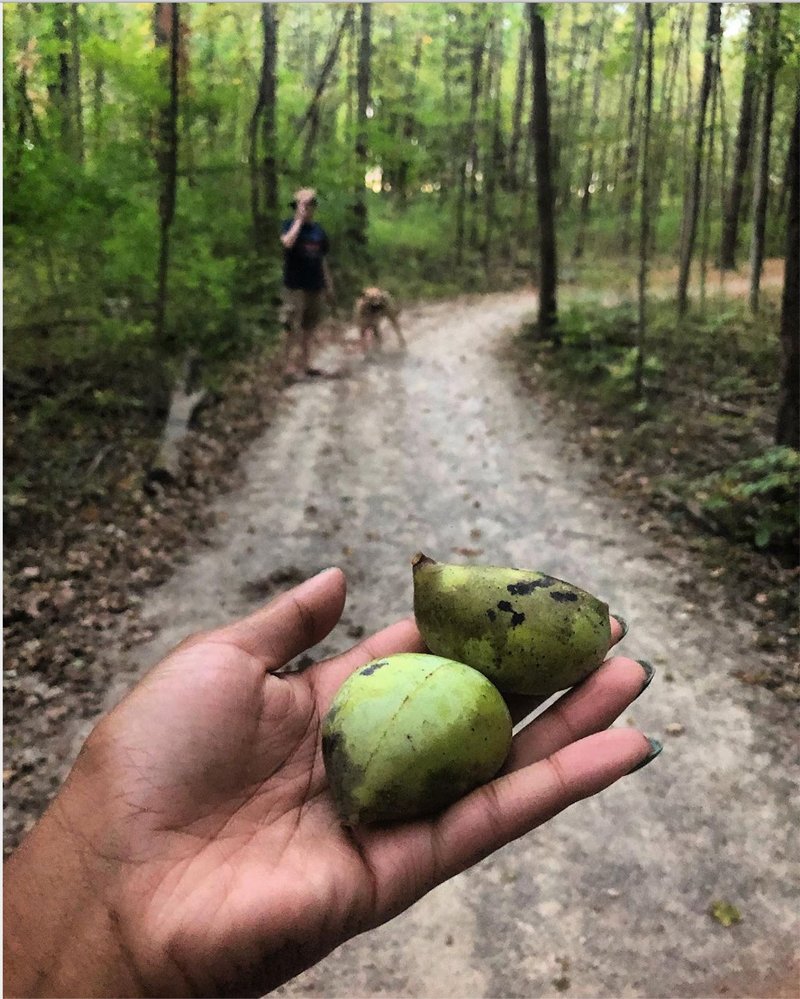 Most of the time, Nelson continued, “It’s a common-sense thing, you know—don’t gather right next to a railroad because of heavy metals. But sometimes I’ll reach out to the parks and recreation department and ask, ‘Hey, do you spray this park?”

Nelson wasn’t expecting the community she found on TikTok, where the average user tends to be younger than on platforms like Instagram and Facebook. More than 60 percent of TikTok users are under the age of 30.

“I didn’t start a TikTok [account] with the anticipation of building any kind of an audience or being any kind of content creator, but I’ve made a lot of friends,” she said. Some of those friends include other foragers such as Scott Stimpson, Indy Srinath, and Pascal Baudar.

“There’s an amazing sense of camaraderie on TikTok, and I appreciate that it’s pushed me to think bigger and to feel more inclined to try new things,” said Nelson.

Stimpson, who moved from Florida to Oregon to follow his interest in foraging for mushrooms, went viral thanks to a video he posted in 2019 of cutting a mushroom that turns blue from oxidation.

While Stimpson and Nelson haven’t met in person, they have connected online. “Alexis is wonderful,” he said. “My dream is to forage and cook with her.” 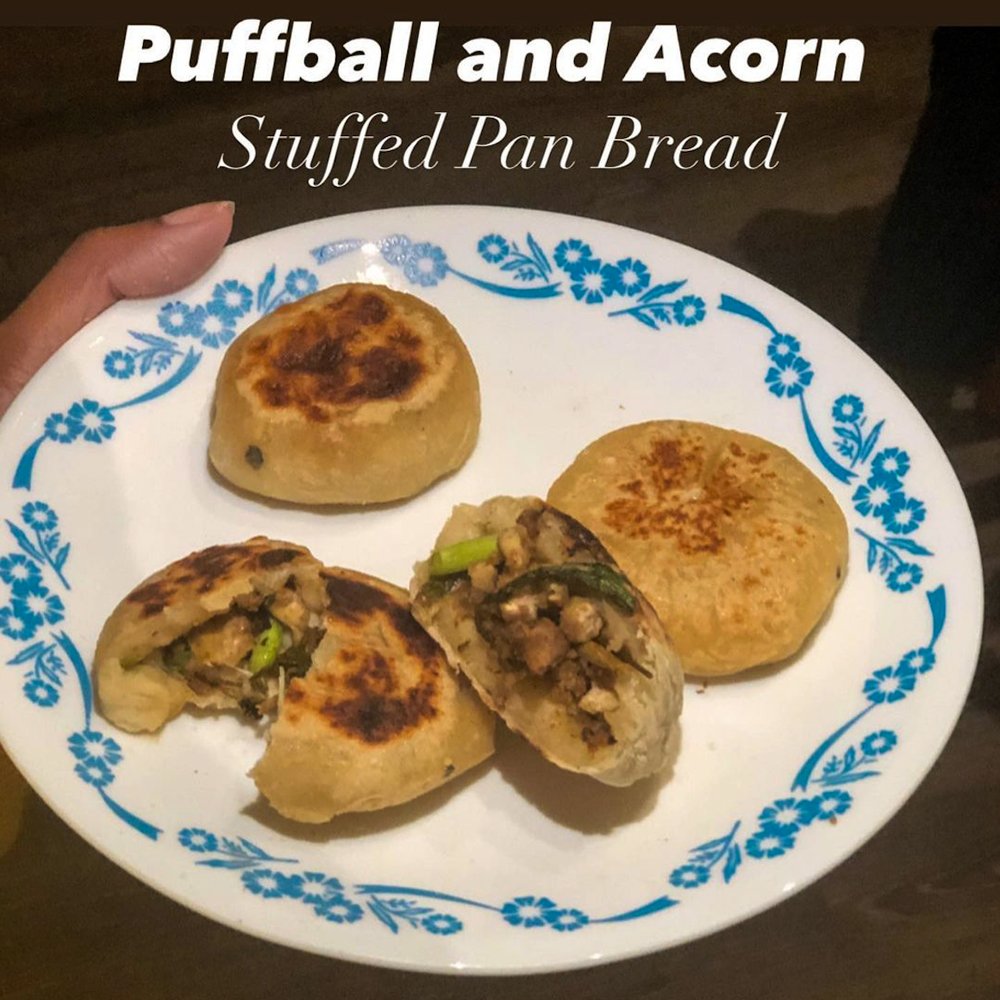 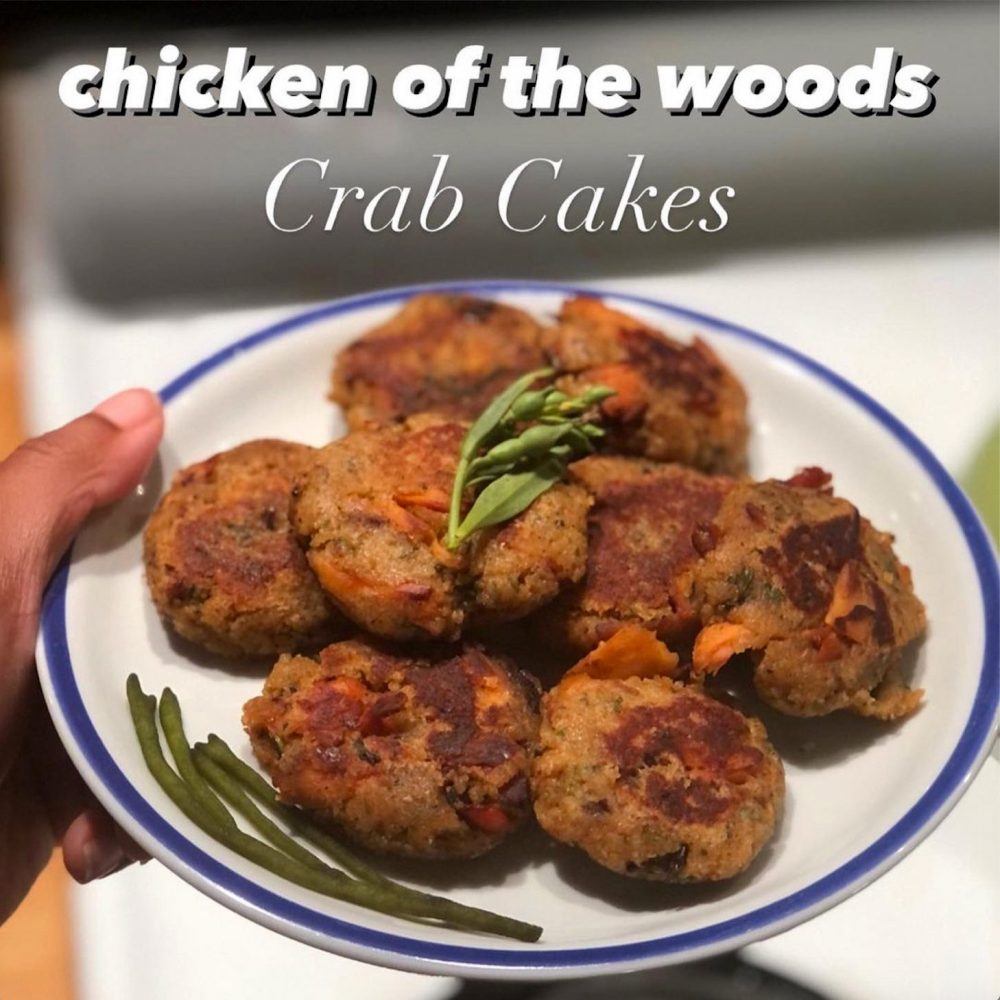 Stimpson, too, appreciates the companionship he has found on social media around foraging. He has used social media to connect with people in the Portland area, starting a barter group he uses when he has extra mushrooms to trade for food. “I’d say 90 percent of my friends in Portland are due to foraging and Instagram; I’m so thankful for them,” he said. Plus, he added, “Any time I can take money out of the equation is wonderful.” While he doesn’t post as often on social media as he used to, he loves when he can tell a story around foraging.

Sharing stories is also one of the main reasons Baudar, who is based in Los Angeles and has been foraging regularly since the late 1990s, uses social media. “Foraging is a way we as humans can reconnect with nature but also use it as a resource to help the environment,” he said. “We don’t have a lot of positive solutions for dealing with invasive plants—people normally want to spray them,” he said. He would like to see people forage and consume invasive species instead.

In his many social media posts around foraging, the mostly self-taught Baudar, author of Wildcrafted Fermentation: Exploring, Transforming, and Preserving the Wild Flavors of Your Local Terroir, focuses on how to harvest invasive species, cut down on food waste, and preserve food.

Similarly, Nelson credits the foraging community she’s found online with pushing her to be a better, more engaging storyteller.

Although she’s staying close to home while the pandemic continues, Nelson is hoping she’ll eventually be able to travel to more places to forage, including to the Pacific Northwest to learn about mushrooms and to Alaska to learn about kelp. As she continues to learn, she plans to keep sharing her experiences with followers.

“I’m constantly looking to continue learning, adding additional historical context to the knowledge of plants that I already have and learning about plants that maybe get overlooked,” Nelson said.

All photos and videos courtesy of Alexis Nikole Nelson.