Civil Eats TV: Cacao Is a Food of the People | Civil Eats

The founders of Cru Chocolate use their connection to Central American cooperatives to highlight cacao’s migration story while making chocolate in their home kitchen.

“In Central America, cacao manifested as the food of the people, and that tells you a lot about how people live,” says Karla McNeil-Rueda, who grew up in a family of sugarcane and coffee farmers in a small town on the border of Honduras and Nicaragua.

McNeil-Rueda is now the co-founder of award-winning Cru Chocolate, based near Sacramento, California. The hand-crafted, bean-to-bar chocolate and drinking chocolate she makes in her home with partner and co-founder Eddie Houston is deeply connected to her heritage and to the story and mythology of Mesoamerican chocolate traditions. 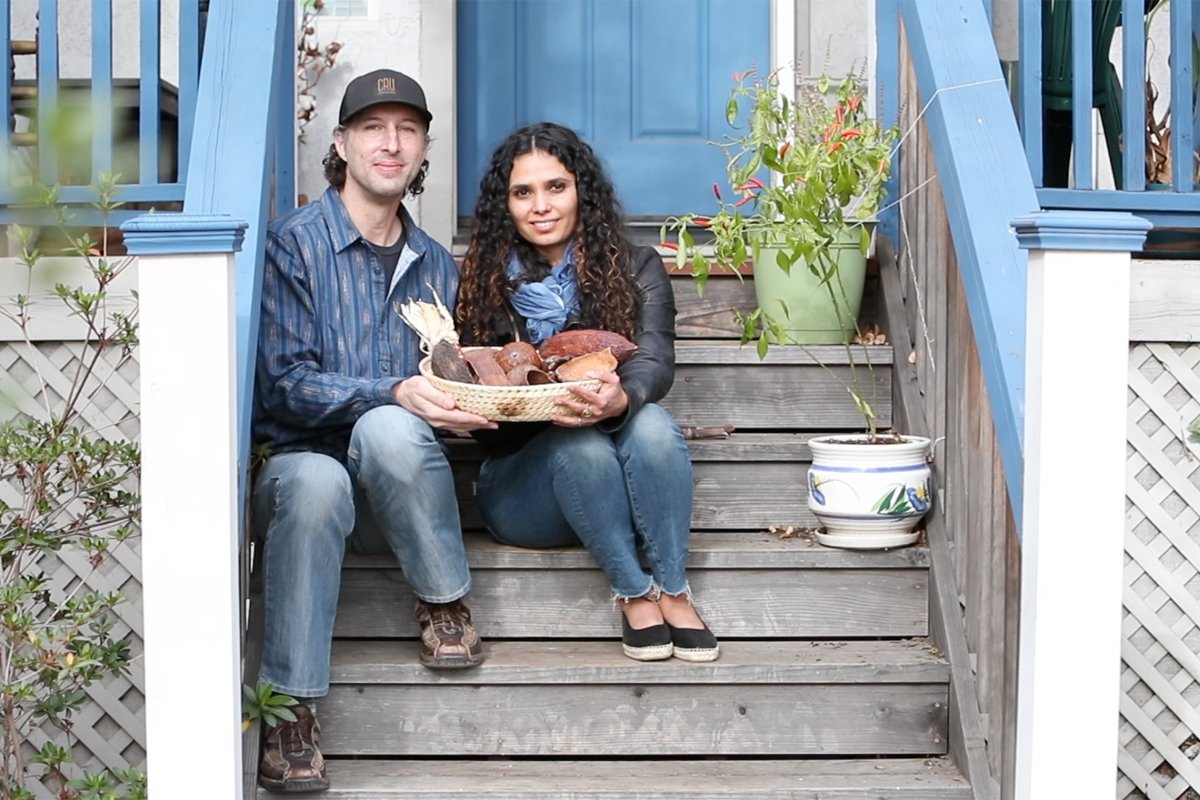 The cacao tree, Theobroma cacao, Latin for “food of the gods,” is native to Central and South America. The ancient Mesoamericans, which included the Olmec, Mayan, and Aztec civilizations, worshipped chocolate, or Xocolatl—bitter water—as the Mayans called it, and enjoyed it as an everyday drink as well as in rituals and healing practices. The Mayans considered chocolate a gift to the people that anyone could partake in, regardless of social standing. Chocolate became less communal under Aztec rule, when it was served as a drink primarily to the wealthy, members of the royalty, and priests.

Despite its storied legacy as a drink for kings, McNeil-Rueda strongly believes in the democratization of chocolate. “Cacao is not the food of the gods. It is the god,” she says. “And it’s always been available to all people.”

Colonialism spread cacao overseas, and today, 70 percent of the world’s cacao is produced in Africa. Americans consume roughly 10 pounds of chocolate per person each year, much of it coming from a small number of global multinational corporations. Millions of smallholder cacao farmers live on the margins, earning subsistence wages in an industry rife with deforestation and ongoing documented cases of child slavery and trafficking.

It’s against this backdrop that McNeil-Rueda seeks to center the history and culture of Central American chocolate in telling her own positive migration story. The Cru team looks for smallholder farmers who grow cacao without pesticides and who value seed diversity and food sovereignty, and the company’s goal is to ensure a fair price by investing in the long-term economic and community development of their growers. They directly source beans from Guatemala, Honduras, and Nicaragua, and partner with women in the cacao production process through farming cooperatives, a rarity in the male-dominated cacao industry.

McNeil-Rueda says she is inspired by her culture’s relationship to nature and the cacao plant especially, that it nourishes and feeds her spiritually. And she has deep respect for the places it grows, the people who have grown it, and for the plant itself.

“The ultimate goal is sharing a delicious cacao, knowing where it comes from, and supporting the people who grow it in an ethical way,” Houston says.

Cru is also a cottage food business: They make their products in their home garage and kitchen roasting, de-shelling, and stone-grinding the beans using modern machinery, with some home hacks. They create bars and wheels that are designed to be melted into hot water to create a range of hot beverages from classic hot chocolate to a new line of powdered cacao-mushroom adaptogenic drinks. 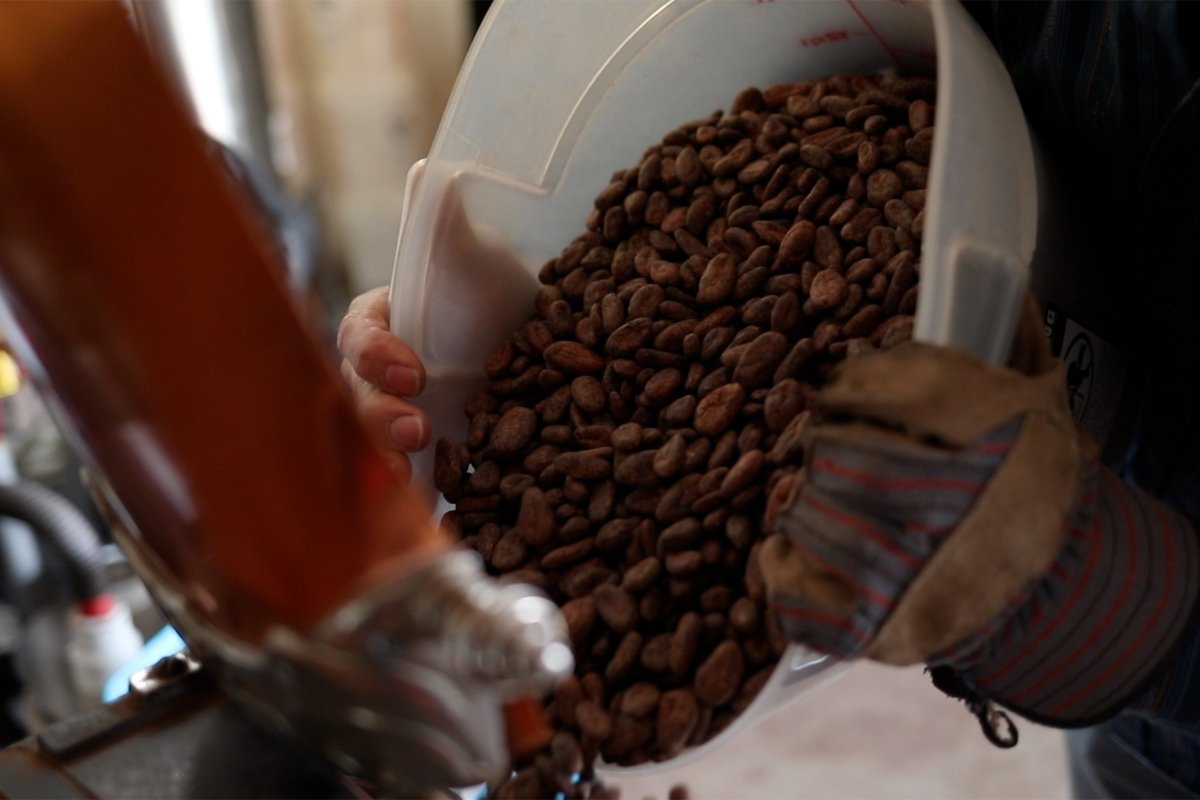 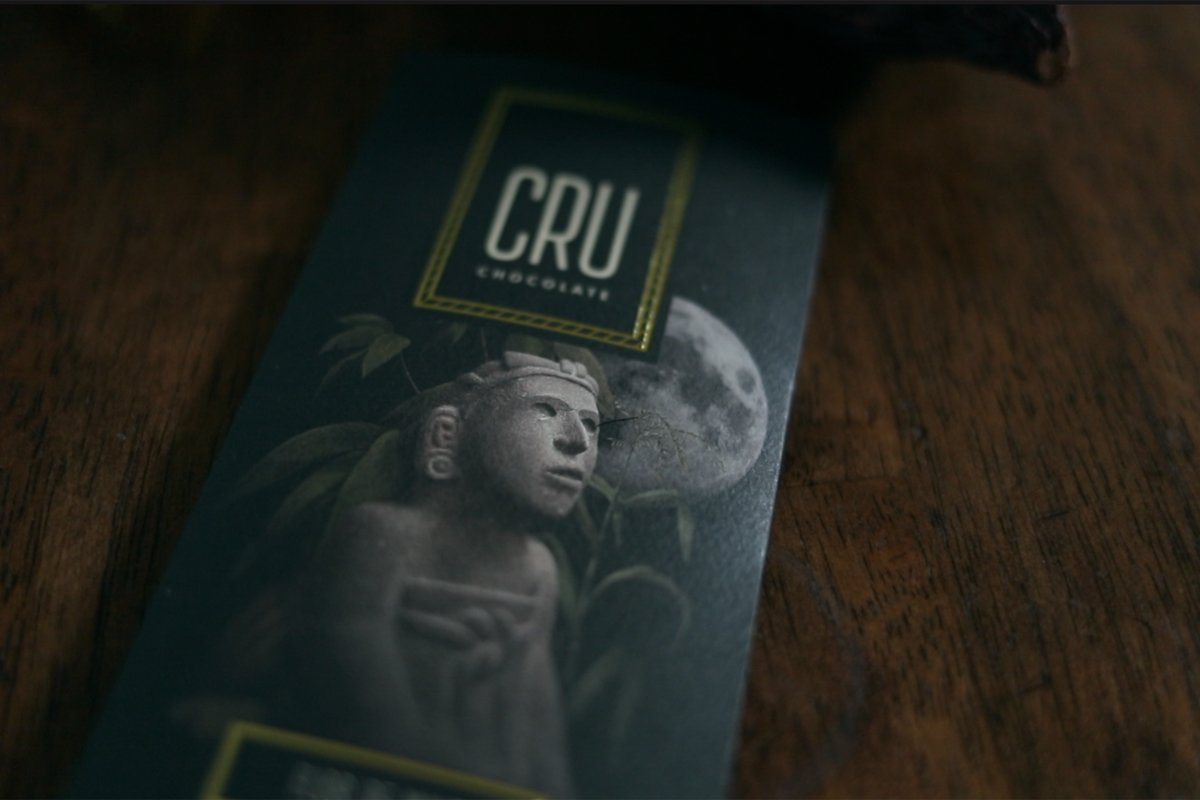 “Chocolate’s origin is a cacao-based drink, in some cases blended with corn and spices, that you drink for breakfast or in the afternoon following a long day of work. Cacao and corn have spiritual and cultural significance in Central America,” says McNeil-Rueda. “They are plants that have evolved along with humans and that together have weaved and enriched the net of life as we know it today.”

After Hurricane Mitch devastated Honduras in 1998, McNeil-Rueda’s grandparents encouraged her to leave farming and pursue an education; she became the first person in her family to graduate from college. She received a degree in industrial engineering and an advanced degree in sustainability, and then studied cacao technology and fine chocolate confectionery at the Chocolate Institute of Latin America and the Caribbean in Cuba. She came to the U.S. in 2005, and together with Houston, who is also an engineer, started Cru in 2016.

Cru’s mission includes a focus on helping people create and grow their own businesses by providing education and facilitating small-scale equipment purchases. In 2018, McNeil-Rueda and Houston were invited by Madeline Weeks, then a U.C. Davis graduate student, to visit the Red de Mujeres Women’s Network of cacao growers in southern Petén in Guatemala, a multi-generational group of Indigenous Mayan Q’eqchi women who work with Asociación Maya Q´eqchi´, Waqxaqib Tz´ikin, an association of cacao farmers. They worked together to empower the women to help them get their traditional products into the global marketplace.

The couple also started buying from the cacao association to support the women and others in the Petén.

“Cru Chocolate is an example of a business with a heart and people who walk the walk,” says Weeks. “Karla’s unique approach to making chocolate begins with a deeper appreciation for the cultural heritage of cacao and how it can be used in diverse ways. She is relentless in her drive to source ethically, work with smallholder producers, and swim upstream to truly improve people’s well-being.” 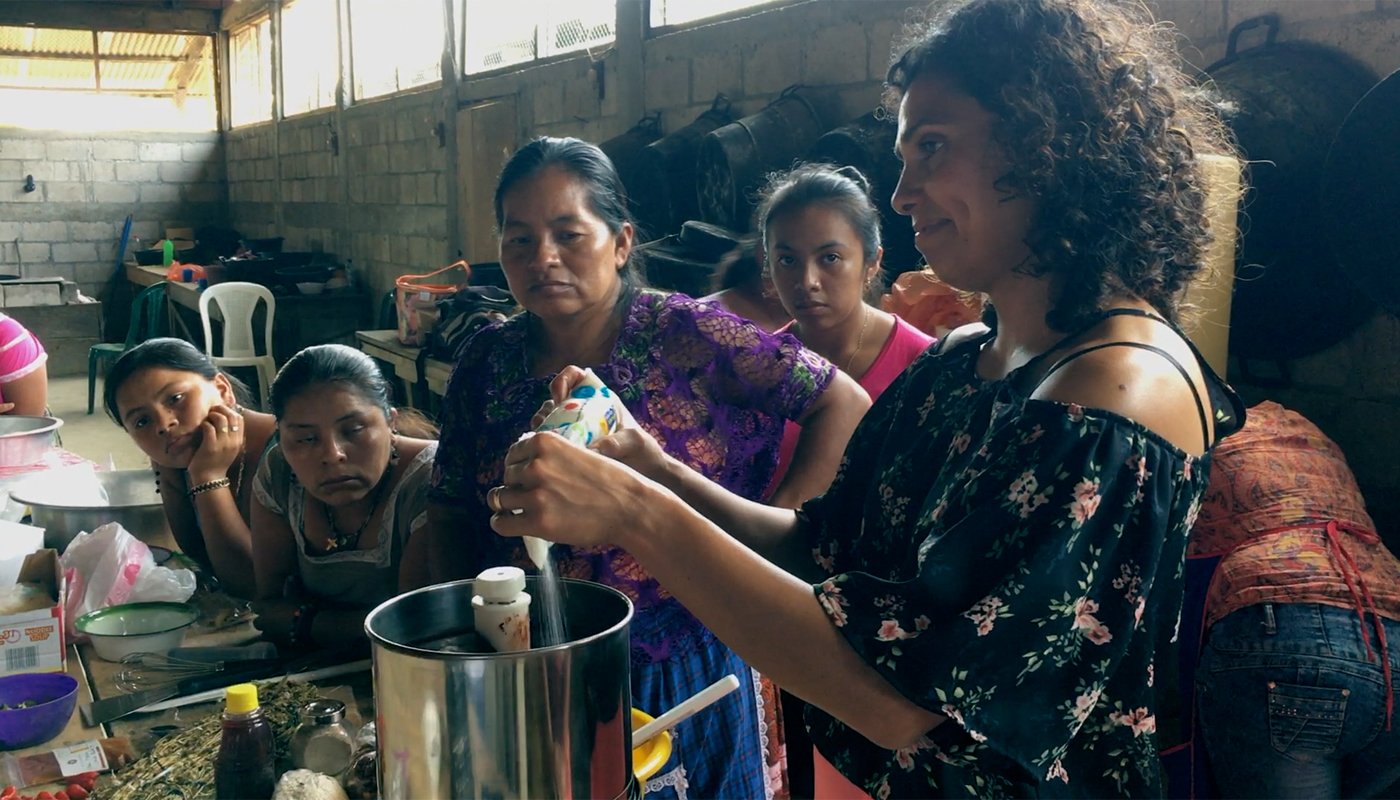 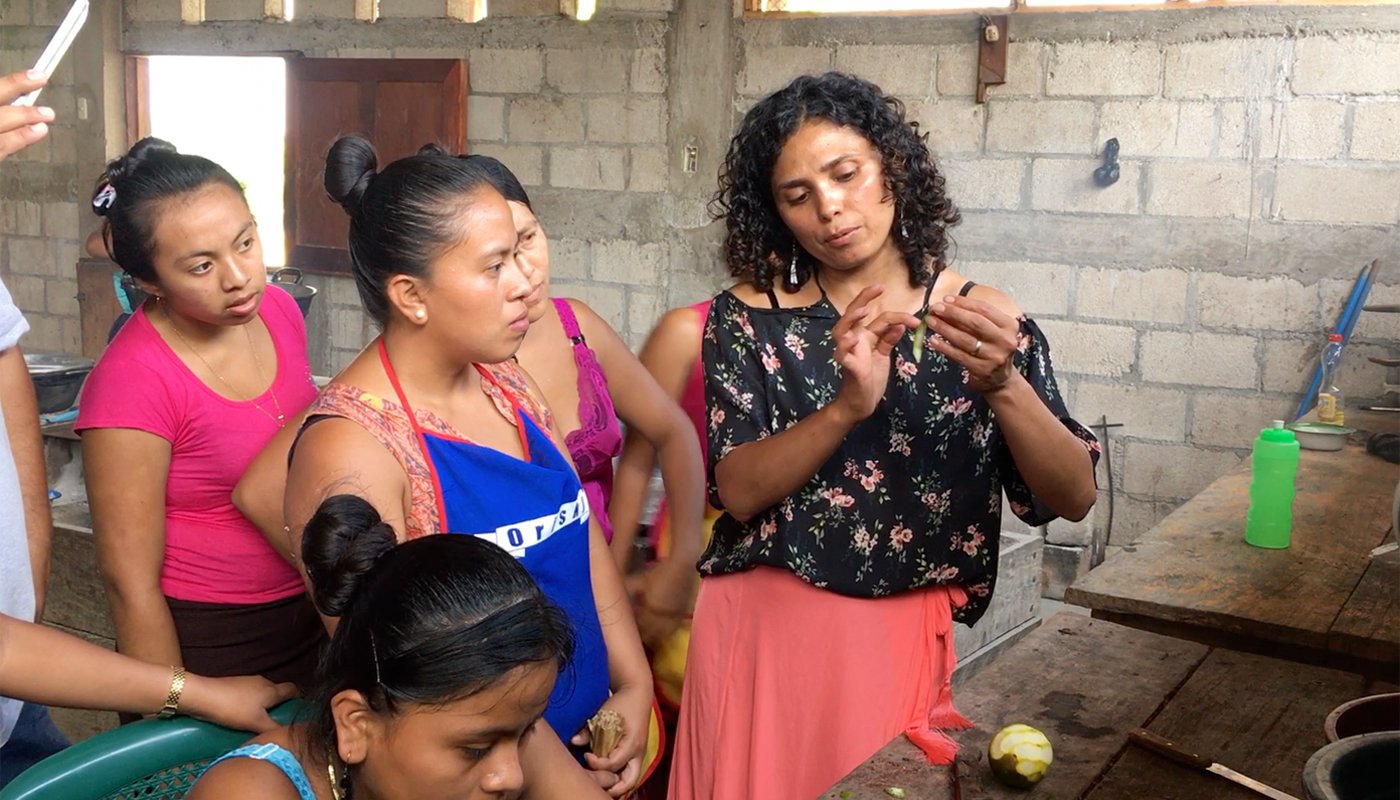 Weeks noted that Fundación ProPetén, the organization that helps coordinate logistics between the communities in Petén, was instrumental in helping with Cru’s sourcing trip, and continues to be an export liaison to the cacao communities.

For McNeil-Rueda, the connection was the beginning of a deep cultural and commercial relationship. “It was important for me, because they are Mayan women who have a very strong and alive culture,” she says. “They are the ones who invented chocolate. I wanted to see how they saw chocolate, and learn from that.”

Last year, Cru purchased one ton of cacao from the association of cacao farmers, and this year, 65 percent of their production will come from Guatemala. Due to the strong cultural heritage of consuming cacao, only around 5 percent of Guatemalan cacao beans are exported, mostly to the U.S. and Europe, and Houston says the taste of the chocolate is quite unique.

“As you’re roasting it, you can remember the people and sights and sounds, and bring that into the chocolate,” Houston says.

The Cru team hopes to be able to grow their business and transition out of their home factory in the near future. In the meantime, they continue to help consumers gain a greater understanding of the importance of buying chocolate that allows consumers to make a direct investment in women.

“The fact that I get to make chocolate in the United States, and people are being exposed to it, opens doors to other definitions of what chocolate can be,” McNeil-Rueda says. “Up until now, the focus has been on candy, and as long as people chase that sugary dessert, what chocolate can be—and what people have been doing for thousands of years—will remain invisible.”