What Role Can Vineyards Play in Conserving California’s Biodiversity? 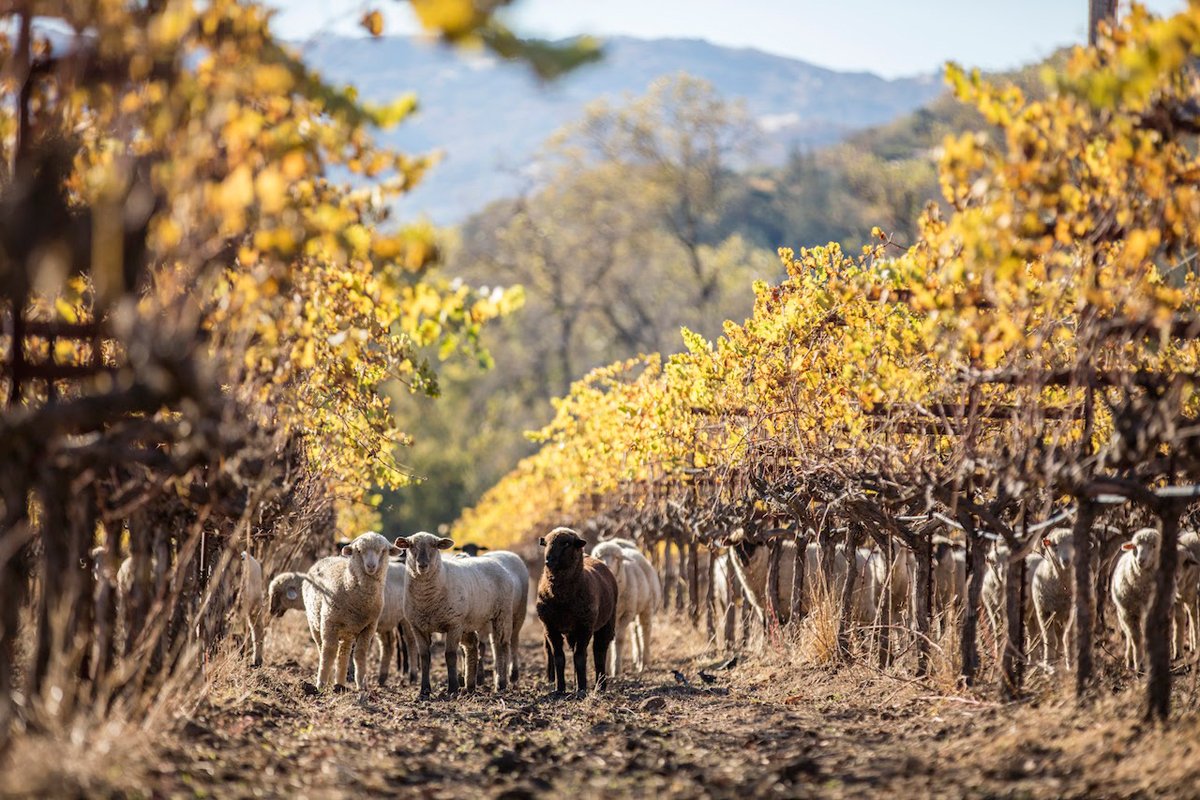 At Gamble Family Vineyards in Napa, California, the beavers are becoming a problem. “I’m speaking about it calmly right now,” Tom Gamble laughs. “On my worst days, I’m more like Bill Murray in ‘Caddyshack.’”

For years, Gamble Vineyards has worked to create a more biodiverse habitat on vineyard land, including establishing animal sanctuaries throughout the property and donating acreage to the Napa River Restoration project. Now the river’s growing beaver population is chewing the trees that Gamble has planted over the last 20 years.

“It’s interesting to see that we solved an issue, but it’s creating another issue,” says Gamble, the vineyard’s founder. Giving back habitat to native species is a matter of fine-tuning, of getting the ecosystem in balance—and this sometimes takes some effort. “But the biodiversity is worth it,” Gamble says.

As on a vegetable farm, growing wine grapes in a way that increases biodiversity leads to a host of benefits. Bringing in good bugs keeps pests in check. Building healthy soil creates a teeming—and productive—microbiome that helps sequester carbon. Planting hedgerows around the vines preserves native species, gives birds a place to roost, and keeps vine diseases from spreading. And of course, there’s the intangible benefit of having a farm, and a life, that’s in balance. “I grow grapes to make wine to sustain a life that can be enjoyed outside and with nature—and the more nature I’ve got, the happier my life is,” Gamble says.

A growing number of California vineyard owners agree with Gamble that farming with a focus on biodiversity is worth the time, effort, and financial investment. Winemakers around the state, including Gamble, Benzinger Family Winery, and Bonterra Organic Vineyards, have worked for decades to protect native species and regenerate the land. Others, like Pisoni Estate, are broadening their focus to include holistic habitat restoration.

Grapevines cover 635,000 acres in California—nearly double the size of the crop in the state in 1990. Given this scale, a commitment to growing grapes to boost biodiversity can produce a number of environmental benefits, as threats to the land—including urbanization, clearing, and climate change—intensify.

“In the event all of California’s wine grape acreage were to be farmed regeneratively, such a widespread shift would contribute toward the mitigation of climate change,” says Joseph Brinkley of Bonterra Organic Vineyards in the Northern California town of Ukiah, in Mendocino county. In addition, vineyards would face less virus pressure, thus reducing the need for pesticides and synthetic inputs. The need for water would decrease and the health of watersheds and ecosystems would improve.

“We would see a continued growth and resurgence of species: beavers, bobcats, coyotes,” says Gamble. And instead of posing a threat to native habitats, California’s vineyards would instead play a key role in restoring the ecosystems of working land.

The Wine Industry as Friend and Foe to Biodiversity

Known for their mild, wet winters and warm, dry summers, Mediterranean wine growing regions in California, Italy, Spain, and Central Chile, are biological hotspots, but they traditionally don’t fall under protected land status because of their practical use as agricultural lands. And the Golden State is at particular risk for habitat destruction, given its high population density and explosive development.

The wine industry is in part to blame: clearing grasslands, shrublands, and oak woodlands to make way for grapevines represents a key driver of habitat loss in California. And because grapes are typically grown as a monoculture on floodplains or hillsides, their cultivation reduces ecological diversity and threatens native species like California oaks, native grasses, and riparian vegetation.

Vineyards also pose an opportunity to increase biodiversity. Because grapes are a perennial crop that can grow for many years, growers can build a diverse ecosystem around the vines with practices like planting cover crops, installing hedgerows, and supporting birds and pollinators.

The wine industry is also uniquely poised for this kind of investment. Because wine grapes are a specialty crop with high rates of return, vineyard owners can more easily afford to invest in new, biologically beneficial ways of operating.

Wine drinkers are also increasingly willing to seek out and pay for eco-friendly wines. One study revealed that consumers show more willingness to pay for wine that is produced respecting biodiversity practices in the vineyard. Dr. Adina Merenlender, a conservation biologist who studies the role of vineyards in habitat restoration, cites wine lover “traditional respect for terroir” as a selling point for such products.

Three Elements of a Biodiverse Vineyard

Soil is key. And wine growers, as a rule, are focused on amending and conserving their soil through natural means like composting, installing erosion barriers, and cover cropping.

“This is an area where growers have a lot of incentive,” says Merenlender. “Nobody wants soil erosion, [and] soil health is very much in their own interest.”

At Bonterra, Brinkley brings sheep into his vineyards and uses their manure to improve soil biology. In addition, Bonterra’s cover crop program has introduced around 10 species of plants to the vineyards, which attract more pollinators.

The second element of biodiversity is habitat conservation and restoration. This includes practices from planting hedgerows where birds can roost to employing Integrated Pest Management (IPM).

“We don’t think of it so much as habitat conservation, but rather as life enhancement,” says Brinkley. “We manage riparian zones and wildlands in order to cultivate biodiversity.” In this way, Bonterra creates an environment where native plants and animals, birds, and raptors can thrive without interference.

The third piece of the puzzle? Water. “In a Mediterranean system, water is habitat,” says Merenlender. Proper water management—including storing winter rainfall to be used for irrigation in the dry summer months—protects the habitats of streams and rivers from being drained for vineyard irrigation.

Meanwhile, Gamble practices cover cropping and minimal tilling to increase carbon sequestration and micronutrients. Recently he has also experimented with planting non-vine greenery as a border between his vines and his neighbor’s. In addition to providing habitat for insects and birds, these hedgerows relieve the virus pressure that comes when vineyards are jammed up against each other. “Sometimes it’s like kindergarten; [the vines] spread germs amongst each other,” he says.

About 150 miles south of Napa and 30 miles inland from the Monterey Bay sits Pisoni Family Vineyards. The Pisonis have used regenerative practices for years, but it’s only within the last handful of years that they have shifted their focus to increasing biodiversity and cultivating polyculture too. Mark Pisoni, the resident farmer, attributes this change to seeing the results of bringing in beneficial insects such as hoverflies and parasitic wasps (which feed on mealy bugs).

The Pisonis have worked on this land for generations, first as dairy farmers, then vegetable growers, and now winemakers. What’s striking is how little of the land they cultivate: of 280 acres, they have planted only 35 with vines. Much of the ranch remains undeveloped, home to native trees and plants that grow undisturbed. “We leave a lot of our ranch in its natural state,” Pisoni says. “I think that’s really important—not planting every corner of land.”

The latest addition to the cultivated vineyards is the insectary garden, which provides a home to native plants and food for the birds and insects that keep pests at bay. Dreamed up by the farm’s Special Projects Manager Jazmin Lopez, this three-acre garden sits at the center of the vineyard. “The idea is that it creates this island of beneficial insects that will go out and assist us with pest management,” Lopez explains.

She and Pisoni worked together to select native California plants for the garden, choosing species that would amend the soil and use minimal water. They picked plants that flower at different times of the year in order to provide a habitat and nectar source for pollinators year round. The oasis of California buckwheat, silver lupine, and sagebrush is now a key part of Pisoni’s pest management strategy. Lopez sees this project and others like it as a way to “use the strengths of Mother Nature” to increase the health and sustainability of the vineyard.

Boosting biodiversity in vineyards sounds like an obvious solution to conserving California’s increasingly depleted native habitats. But there are obstacles, from capital to policy to market demand. For most growers, the barriers boil down to two things: time and money.

“We’re setting aside good land that could be used for vineyards to plant crops that are not generating revenue,” says Pisoni. “It’s right in the long term for our ranch and for the planet. But are we sacrificing short-term profits? Probably.”

This type of farming is also time-intensive. Lopez and Pisonia dedicate hours to the insectary garden, actively monitoring beneficial insects and making sure pests are not entering the vineyard.

Gamble is quick to point out that not every California grower can afford to farm grapes this way. In places like the Central Valley, grape growers often work next to other agricultural crops that get sprayed by pesticides. The Central Valley, he says, also lacks the same type of high-end branding and consumer market that regions like Napa and Sonoma have.

He sees finding a market willing to pay for these efforts as the biggest obstacle for vineyards that want to join the fight for conservation. “Consumers are our partners, and we can progress as fast as they are able to afford our wines,” says Gamble, whose wines range from $90 to $140 per bottle. “[But] if you can’t get a sustainable price for your product, you will not be in business.”

In his experience, the younger the wine drinker, the more they care about biodiversity. Wine makers who choose to pursue habitat conservation will need to find and market to this kind of consumer.

And then there’s a larger cultural barrier, which might be the most significant of all. “The biggest hurdle is the paradigm shift from a crop monoculture to a diverse—and commercially viable—farming system,” says Brinkley. “Overall, it’s a holistic approach that may not be intuitive at first, but the land is a demonstrative teacher.”

For Pisoni, his farming practices are linked inextricably to a long-term vision for land cultivation. “These are generational commitments you are making to these vineyards,” he says.

The Need for Incentives

Merenlender believes an important next step in moving away from monocrops among California’s vineyards is for land trusts to provide strategic easements to growers, which will reduce the cost of habitat restoration.

For example, a grower may decide to remove vines from a marginal strip of land—an area that’s too wet or too rocky—in order to allow native species to recolonize. Merenlender suggests that private and public land trusts offer easements to counteract the cost of removing those vines. This policy change would provide incentive for more growers to make space on their land for passive species recolonization.

“We need incentive programs that are more strategic than just putting an easement across the whole plot of land,” she says. “If it’s too much of a cost for the producer, then let’s [ask] the land trust sector to offset those costs strategically.”

Better growing practices can’t make up for the amount of native habitat that has already been cleared to plant grapes, Merenlender says. But while they “don’t replace the protection of these intact ecosystems, working lands are still super important to focus on. And the vineyard has opportunities to make [these lands] more diverse.”