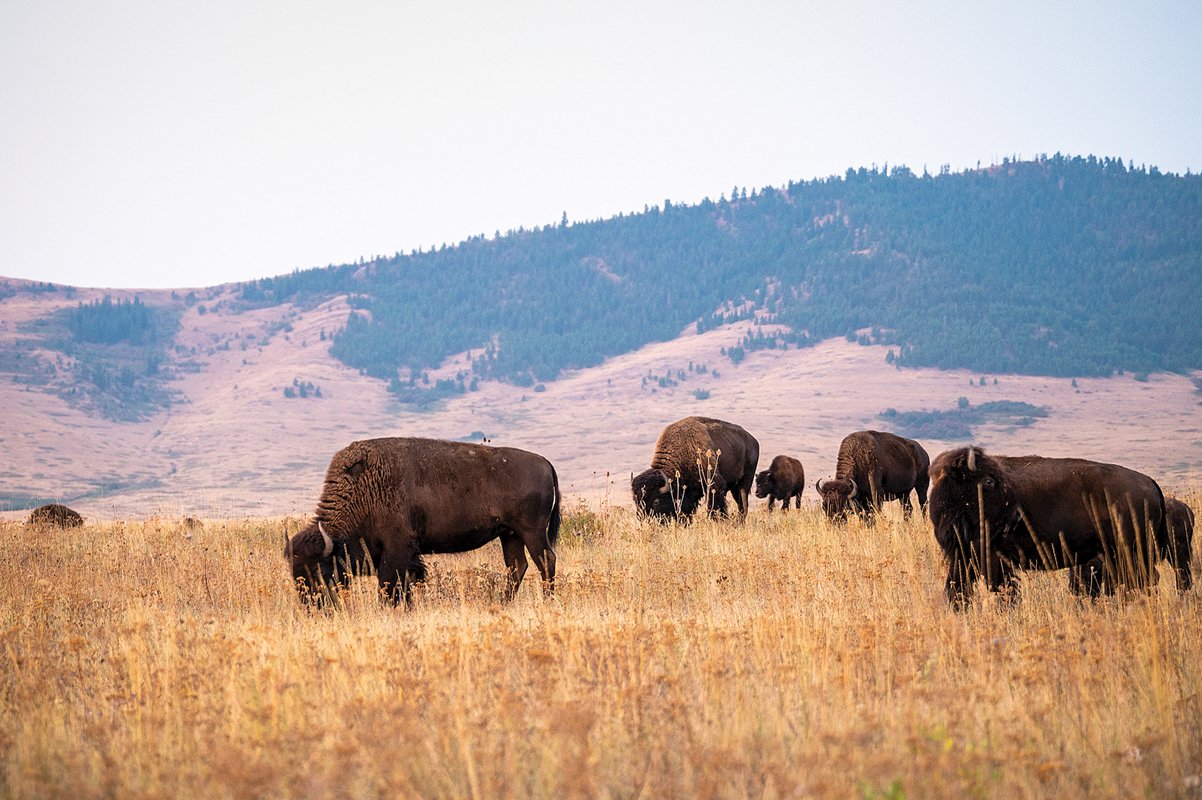 When Shane Morigeau was growing up on the Flathead Indian Reservation, he knew that the land inside the fenced National Bison Range was different from the tribal lands elsewhere on the reservation, at the base of Montana’s Mission Mountains or the shores of Flathead Lake. He remembers being a kid in his dad’s truck, driving past while his father explained that the lands inside the fence weren’t tribal lands anymore. As tribal elders tell it, it was common knowledge that the fence was as much to keep them out as it was to keep bison in. “It happened long ago,” Morigeau said, but “it still resonates across generations.

In December, a bipartisan bill that would transfer the lands and management of the National Bison Range to the Confederated Salish and Kootenai Tribes looked as if it might die in Congress with the end of the session. Instead, it was attached to a must-pass package of COVID-19 relief and government spending bills, and, unexpectedly, it passed. After a century of work, it felt sudden, said Morigeau, a tribal member and attorney for the Confederated Salish and Kootenai Tribes and a Montana state legislator. “It happened so fast, it just really hasn’t sunk in.”

Finally, after 113 years, the 18,800 acres of grassland, woodland, and wildlife that comprise the National Bison Range, along with its resident bison herd, will be returned to the Confederated Salish and Kootenai Tribes. Today, the transfer has broad support from the community, conservation groups and politicians alike. But the long journey included three rounds of failed agreements between the U.S. and the tribe, numerous lawsuits, a federal investigation, and a massive public education campaign to quash racist rumors and stereotypes. It comes at a time of a broader conversation on the return of land stewardship to tribal nations, with an Indigenous woman—Deb Haaland (Laguna Pueblo)—poised to oversee public-lands management as Interior secretary for the first time in history.

“It’s a reconciliation,” said Chairwoman Shelly Fyant. “We are such a place-based people. To have this land back, to be in control of it, is a fresh, new hope.”

The National Bison Range started as a small herd of free-roaming bison on the Flathead Indian Reservation managed by tribal members in the 1870s, while the bison around them were hunted to near-extinction. During the allotment era, when tribal lands the U.S. deemed “surplus” were sold, the federal government divvied up the reservation in 1904, giving some 404,047 acres to settlers, 60,843 to the state of Montana, and 1,757 acres to the U.S. “for other purposes.” Settlers flooded in, and today tribal members are a minority on their own reservation.

The U.S. retained tribal lands for the range, carved out of prime habitat in the middle of the reservation. In 1908, President Theodore Roosevelt put the range under federal management without consultation with the tribe. Tribal members were not even allowed to work there.

In 1971, the Confederated Salish and Kootenai Tribes took the U.S. to court for taking its lands in the early 1900s. They won, but though the taking was declared illegal, the lands weren’t returned.

Tribal efforts to co-manage the National Bison Range with the U.S. Fish and Wildlife began in the early 1990s, but they were met with opposition, despite the tribe’s established conservation record. (In 1982, for example, the tribe became the first tribe to designate a wilderness area when it created the 92,000-acre Mission Mountain Tribal Wilderness.) The tribes and the wildlife agency agreed to co-manage the range in 2004, but the arrangement crumbled within two years after a small number of vocal federal employees and locals allied with an anti-Indigenous group, alleging mistreatment by the tribe. It was a theme that would continue for nearly two decades.

Anti-Indigenous racism wasn’t new to the Flathead Indian Reservation. As human rights advocates have noted, anti-Indigenous groups have sprung up here since the 1970s, precisely because of the large population of non-Native settlers unwilling to abide by tribal laws. Groups like All Citizens Equal and Citizens for Equal Rights Alliance regurgitate racist stereotypes while seeking to reduce tribes’ political power and refusing to recognize their sovereignty.

Scores of people—some associated with those groups—wrote to Fish and Wildlife in opposition, pushing cruel stereotypes of Indigenous people as “lazy” and on “federal welfare.” Delbert Palmer, a leader of multiple anti-Indigenous groups, wrote to the Department of Interior in 2006 that “tribes are not sovereign nations.”

The national nonprofit Public Employees for Environmental Responsibility (PEER), which supports current and former public employees, also opposed the tribe’s management on behalf of Fish and Wildlife employees concerned about working for the tribes. Some, including Delbert Palmer’s son, Skip Palmer, then a board member of All Citizens Equal, had direct ties to anti-Indigenous groups. As an organization ordinarily devoted to government whistleblowers and environmental ethics, PEER gave anti-Indigenous sentiments a new sheen of respectability, as well as a pro bono platform.

In dozens of press releases over more than a decade, PEER accused the tribes of harming the bison, harassing non-Native federal employees, and “privatizing” public land, framing the tribes’ plans as a “takeover.” On top of multiple lawsuits, PEER filed a formal complaint with the Office of Inspector General, which turned up virtually nothing. In the early 2000s, the Montana Human Rights Network contacted PEER to point out how its harmful rhetoric echoed anti-Indigenous views.

In response to questions, Tim Whitehouse, PEER’s executive director since 2019, said in a statement that PEER didn’t oppose the recent legislation; rather, it opposed previous negotiations because they “lacked transparency.” “Under my watch, PEER will never represent individuals or groups associated with anti-Indigenous views. Systemic racism against Indigenous peoples is real and its impacts have been devastating. PEER should never and will never use language that echoes anti-Indigenous sentiments or use language that divides communities.”

Opposition from non-Natives is common when it comes to returning land to tribal management, said Krystal Two Bulls, Northern Cheyenne and Oglala Lakota, director of NDN Collective’s LandBack campaign. Two Bulls, who is from Lame Deer, Montana, sees the return of the National Bison Range as emblematic of the long endeavor to shift the stewardship of public lands—many of which were taken illegally—back to tribes.

Similar conversations are happening over Bears Ears National Monument in Utah and Gwich’in lands in the Arctic. It’s a generational battle, but, Two Bulls said, “More than any other campaign that I’ve worked on or any other organizing space that I’ve been in, Land Back is one of the ones that holds the most hope.”

Chairwoman Fyant remembers riding on horseback on the range as a teenager, gleefully racing ahead when she wasn’t supposed to, and, later on, enjoying baseball and picnics when she worked at Two Eagle River School. Every tribal member has a unique relationship with the National Bison Range. And yet, the Salish word for it is Nɫoʔx̣͏ʷenč, meaning “the fenced-in place.” The physical barrier grew into a powerful metaphor about how tribal members could relate to the lands taken from them, Fyant said.

But now, the tribes can put their energy into Indigenizing the range, welcoming the public to learn about tribal stories and priorities. Speaking of the return of the lands and Haaland’s potential as Interior secretary, Fyant summed it up simply: “It’s about damn time.”

This article was originally published at High Country News on January 26, 2021, and is reprinted with permission.