Annabel Rabiyah is raising awareness of a shared culinary history in her Boston-based pop-up.

Annabel Rabiyah holding a platter of zangula at a Jewish food festival.

Annabel Rabiyah moves through the kitchen with familiarity. She’s unconcerned with measurements and makes Iraqi kubbeh (meat wrapped in a wheat pastry and fried) and khubz tawa (Iraqi flat bread) from memory, using her hands to mix ingredients. She knows when to add more water to the farina and flour mixture for the kubbeh based on the feel of the dough, and she’s generous with the black pepper, a spice central to Iraqi food. 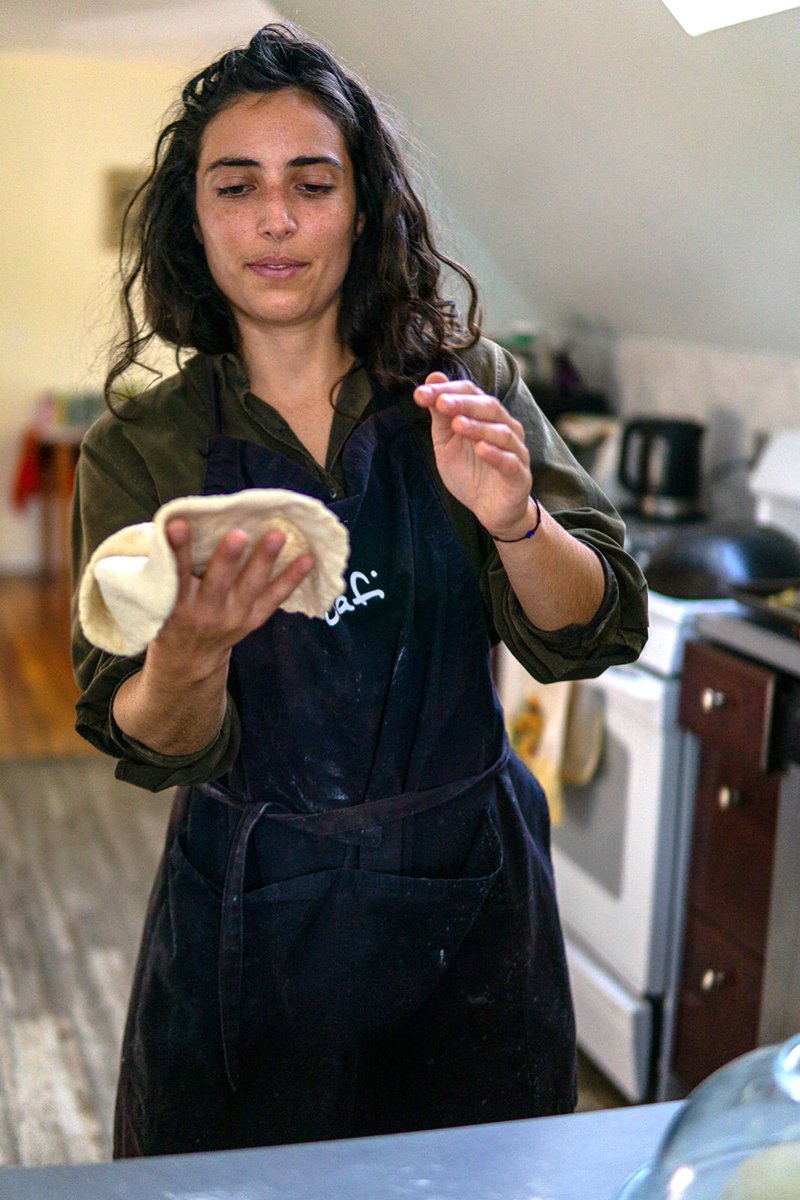 As head chef and co-founder of the Awafi Kitchen, a Boston-based pop-up culinary space dedicated to sharing Iraqi-Jewish food and culture, Rabiyah cooks the Iraqi food she learned from her family. She started the Awafi Kitchen in 2017 with several family members to tell stories through food and highlight the overlap between Iraqi and Jewish food.

“The more I delved into learning about the cuisines, [what] I thought was essentially Jewish was [also] Iraqi food,” Rabiyah said. “It’s not even similar, it’s essentially just Iraqi food.”

Before the pandemic, the Awafi Kitchen partnered with local artists and venues to offer a culinary element to their projects, hosted pop-up meals at restaurants in the Boston area, and used these collaborations to uplift Sephardic and Mizrahi Jewish history and culture. More recently, Rabiyah has pivoted to teaching online cooking classes, and occasional baked good deliveries. She can be seen on YouTube, demonstrating a recipe for ba’be ‘btamur, Iraqi-Jewish hand-rolled date pastries, and khubz tawa, which she taught herself by watching Iraqi videos and experimenting in the kitchen. 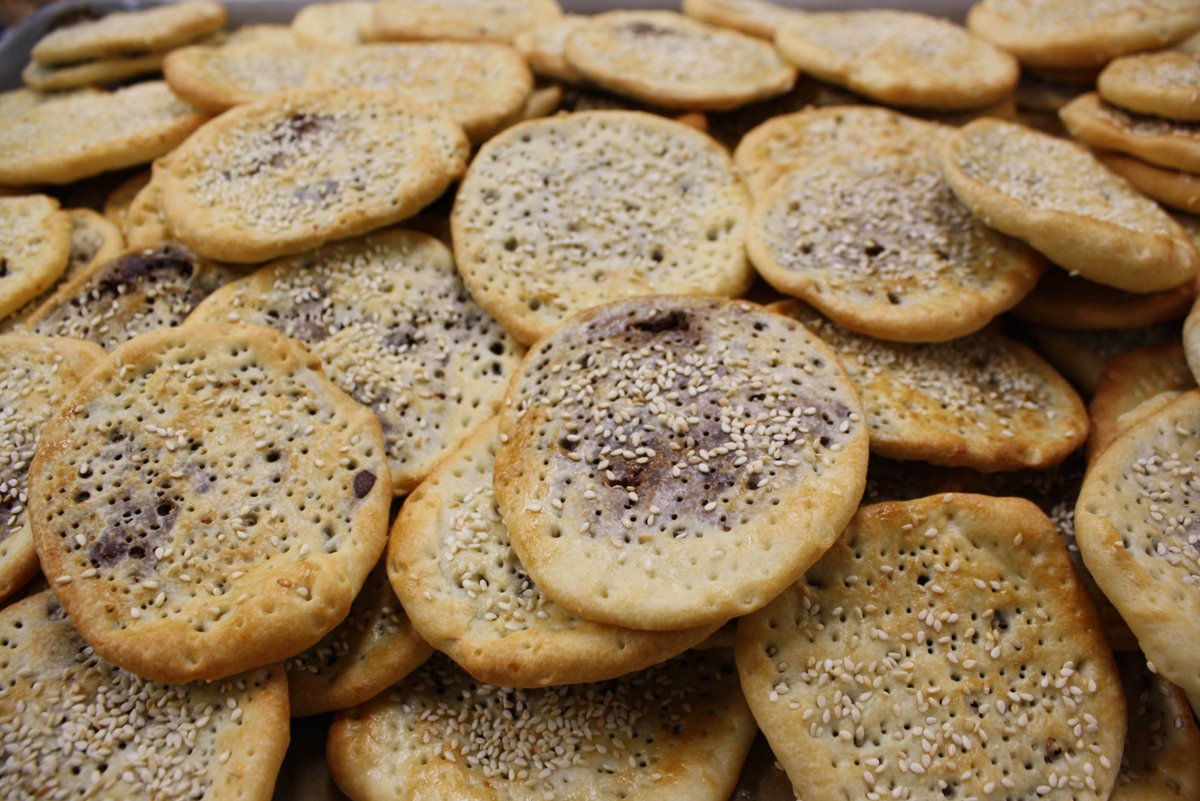 Rabiyah—who has a Master’s degree in nutrition and has a day job as an urban farmer supporting 56 community gardens in Boston for The Trustees of Reservations—has used her work with Awafi Kitchen to go deeper into her own cultural background. It’s also part of a larger effort to bring attention to the cuisine and culture of Jewish people who aren’t part of the Ashkenazi majority.

Rabiyah, who grew up in the U.S. with an Ashkenazi Jewish mother and an Iraqi father, spent years grappling with questions about her heritage. “I grew up with a very politicized identity,” she said. “As a child, people really didn’t believe that Iraqi Jews existed.”

Rabiyah’s family immigrated to the U.S. from Baghdad after the 1967 Six-Day War. Before that, she says, Jewish and Iraqi culture were synonymous there, largely because of the size of the Jewish population. “In the [1930s] it was 40 percent Jewish in Baghdad,” said Rabiyah. “They shut down the main commercial street for Shabbat.” Now, the Jewish community there is essentially non-existent.

It’s hard to say how many Sephardic and Mizrahi Jews live in the U.S.; the U.S. Census doesn’t ask about Jewish religion or culture, and most national surveys of American Jewish life fail to ask respondents about lineage. One survey conducted by Brandeis University found that 88 percent of American Jews identify as white, 2 percent as Black, 5 percent as Hispanic, and 4 percent as “other.” One analysis by a group of Stanford researchers concluded that 12–15 percent of American Jews are people of color. For the same reasons, there’s little data on how many Jews in the U.S. identify as Ashkenazi, but immigration throughout the 20th century was largely from Eastern European countries.

Judaism is a global religion with multiple distinct cultures. Yet in the U.S., a country that has long been a site of refuge and relocation for Jewish people fleeing persecution, the dominant stories about Jewish culture center Ashkenazi Jews, whose ancestors hail from Eastern European countries and Russia. They’re often perceived as white and of European descent, and their assimilation into American culture has helped to create a false narrative that Ashkenazim are the norm. The impact of this, Rabiyah said, is an erasure of Sephardic and Mizrahi Jews, whose lineages begin in North Africa, Spain, and the Middle East.

Rabiyah is using food to record family history, document generations of Jewish movement across countries, and to demonstrate that people like her—Jews of color—exist. Take tbeet, a famous Iraqi-Jewish dish that involves slowly cooking a chicken in rice and is deeply embedded in Jewish faith and culture. It was traditionally started on Fridays, before it was forbidden to start a fire to honor the Sabbath, and served 12 hours later on Shabbat.

She also hopes to show how Iraqi Jews have acculturated to the U.S. and continue to adapt traditional foods here by swapping out ingredients that are easier to find. In order to develop recipes for the Awafi Kitchen, she reached out to elders in her family and in her community and asked them to tell her about recipes that have never been written down.

“Family is at the core of our food, and our story,” Rabiyah wrote on Instagram. “Our family members include some of the last Iraqi Jews that grew up in Iraq. Their memories feel so important to preserve.”

In December, Rabiyah partnered with the Brooklyn-based collective Experimental Bitch Presents in their production of a play called In The Kitchen. Rabiyah developed the recipe for ba’aba beh tamur, an Iraqi cookie typically made for the Jewish holiday of Purim. To adapt to the pandemic, the project was a play-in-a-box: audience members received boxes with the audio play and the ingredients and recipe for the cookies.

Listeners heard the voice of Hannah Aliza Goldman, an actor, performer, writer, and food historian, draw on her own family history—her father’s lineage is Sephardic from Morocco, and her mother is Ashkenazi.

In preparation for the play, Goldman retraced her grandmother’s journey and returned to the village in Morocco where she grew up. In the 1930s, more than 250,000 Jewish people lived in Morocco, while today that number hovers around 3,000. For Goldman, much like Rabiyah, cooking traditional Sephardic recipes is a way to rebuild lost connections to that side of her cultural heritage.

“In Jewish culture we have different definitions of homeland,” Goldman said. “My grandmother was very religious. For her, Eretz Zion—Israel—was the homeland and they chose to move there for religious reasons. In the same vein, Morocco was also her home.”

Championing Sephardic and Mizrahi cuisine while telling the stories of migration and multiple homelands is a way of preventing cultural erasure, said Coral Cohen, the play’s director. For this reason, she plans to work with other Sephardic and Mizrahi artists in the future as well. Like Goldman, Cohen comes from a Mizrahi and Ashkenazi family. “Being white-passing, it’s important to acknowledge the privilege that we have, but really important to strongly identify as Mizrahi Jews, as Sephardic, as Iraqi, or Persian, because we are so erased in this country,” Cohen added.

Cohen and Goldman relied on community partners, such the Sephardic Mizrahi Q Network, a community of LGBTQ-identifying Sephardic and Mizrahi Jews who gathered around meals before the pandemic, to get the word out. The Q Network was inspired to use food as a way to reconnect with heritage, tell stories, and demonstrate that there are multiple valid ways of being Jewish.

“Food is one of society’s oldest technologies of community building. We’ve had everything from chicken with preserved lemon and green olives to Persian rice. All the food represents the beauty and the diversity in [the Jewish] community.”

In 2017, Ruben Shimonov, born in Uzbekistan and raised in the U.S., found himself searching for a Jewish community of people like himself: queer, non-Ashkenazi, and able to hold multiple identities at once. Every Friday night for Shabbat, members of the Q Network would share a meal together. Now, the community shares space on a Zoom screen, but prior to the pandemic the New York-based organization would rotate hosting responsibilities, eating in a different home every week.

“Food is one of society’s oldest technologies of community building,” Shimonov said. “We’ve had everything from chicken with preserved lemon and green olives to Persian rice. All the food represents the beauty and the diversity in [the Jewish] community.”

Representing that diversity is equally important to Rabiyah. For her, cooking her own family’s recovered recipes is a way of ensuring that other Sephardic and Mizrahi Jews feel increasingly seen and heard. “If you want your perspective to be shared,” she said. “Especially if you’re in a context of a lesser-told history—you have to tell it yourself.”