Getting Food Assistance to Californians Might Get Easier | Civil Eats

A line at a Food Bank distribution for those in need in Van Nuys, California. (Photo by Mario Tama/Getty Images)

A new bill could make it easier for seniors and people with disabilities to apply for CalFresh, California’s version of food stamps, and allow people to enroll entirely over the phone by 2024.

“California’s food insecurity crisis is worse than ever, and we have a moral responsibility to make CalFresh benefits easier to access,” said State Senator Scott Wiener, a San Francisco Democrat who introduced the bill earlier this month.

Wiener’s proposal comes against a backdrop of rising hunger as the pandemic continues to ravage California’s economy and increasingly tests its hospital system. One in eight adults in California said there hadn’t been enough to eat in their household, according to a recent Census survey. Over 3.3 million Californians said they had received free groceries or meals from places like food banks, school programs, or churches.

California has long lagged the rest of the country in getting the federally funded Supplemental Nutrition Assistance Program to all who qualify, which means the state misses out on billions in federal funding earmarked for the hungry. Just 71 percent of eligible Californians were enrolled in CalFresh—tying with Kansas for the fifth-lowest rate in the nation—in 2017, the last year for which national data is available.

Food advocates and county and state officials say the reasons behind California’s low participation rates are numerous and complex: With each county administering the program separately, some counties enroll almost every eligible person while others don’t get to half; the state’s geographic and ethnic diversity means many are hard to reach; often immigrants fear that signing up could hurt their or a loved one’s chances at citizenship. 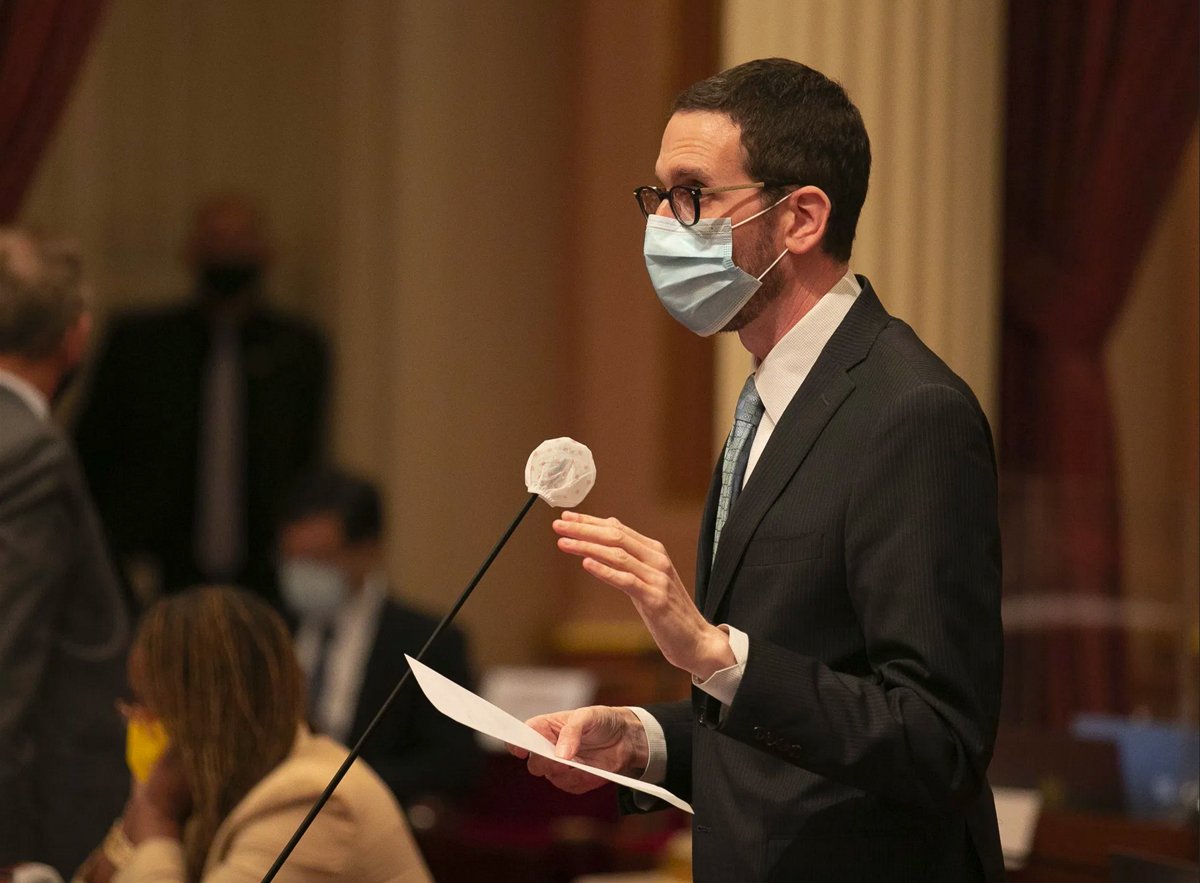 Sen. Scott Wiener speaks on the Senate floor during a vote on Aug. 31, 2020. (Photo by Anne Wernikoff for CalMatters)

Most everyone agrees that the application itself—which involves answering lengthy questions, providing documentary evidence, and participating in an interview—along with frequent recertification paperwork present big barriers. Only about 20 of 58 counties currently allow people to apply entirely over the phone, according to Wiener’s office.

“CalFresh benefits are critical for so many,” Wiener said. “Lengthy and burdensome bureaucratic processes should not get in the way of people being able to put food on the table.”

It’s not the first time Wiener has tried to ease CalFresh application hurdles. In 2018, he sponsored an ambitious proposal to require the state to enroll 95 percent of eligible households by 2024. It failed to reach a final vote after county officials raised concerns that it lacked funding.

Last year, Wiener sponsored a narrower version, nearly identical to this year’s. But it also died early as lawmakers focused on the state’s coronavirus response.

The pandemic has given California a peek into how an easier CalFresh enrollment process could work. Early on, the federal government waived a requirement that people provide a signature—the part of the application that often brings people into county offices in counties that haven’t yet implemented e-signature technology—and also made it easier for recipients to recertify their eligibility.

It’s hard to say how many more people were able to get on or stay on CalFresh because of the change. But it’s clear that need spiked. The number of CalFresh recipients increased rapidly by 800,000 between February and June, when enrollment peaked at over 4.8 million, before dropping back down to 4.3 million by November.

“But those waivers will expire at some point, and we cannot afford to go backward,” said Jared Call, a senior advocate with Nourish California, a nonprofit that promotes food security and has backed Wiener’s efforts.

Focus on Seniors and People with Disabilities

The bill also would simplify and shorten the CalFresh application for seniors and those with disabilities, a change which has led to higher participation in other states. In theory, that could happen quickly after the bill was passed, potentially increasing food security for seniors affected by the pandemic.

Just 19 percent of eligible California seniors receive the food assistance, compared with 42 percent of seniors nationally, according to an analysis of 2015 enrollment data.

“There is an easier and a better way to do this,” the senator said, “as many other states with much simpler food benefits application systems show us.”

This article originally appeared in CalMatters, and is reprinted with permission. The article is also part of the California Divide, a collaboration among newsrooms examining income inequality and economic survival in California.

Jackie covers income inequity and economic survival for CalMatters' The California Divide collaboration. She has reported for the Data and Enterprise desk for Reuters News and for her hometown paper, The Santa Barbara Independent. Her reporting on immigration, the environment, and justice has appeared in Reuters, Pacific Standard, Public Radio International’s “The World,” and The Philadelphia Inquirer, among other publications. A graduate of Stanford University’s master’s program in journalism, she received the James S. Robinson student journalism award for a multimedia series that documented the impacts of wildfires on immigrant communities in Northern California in 2017. Jackie is a Report for America corps member. Read more >