Forage aims to make every cent of SNAP count, and partners with grocery chains to list deals and lowest prices.

Andrew Lopez used to spend two whole days a month plotting out his grocery shopping route. He’d sift through coupons for grocers throughout Los Angeles, carefully curating and editing a shopping list that would, hopefully, stretch their funds the furthest.

“I used to run from store to store to get the best deal,” said Lopez, who delivers restaurant meals for a living. “It’s something I inherited from my mom. She’d go to Super A and then Vons and then this one and that one. I grew up thinking that’s just the way you do it.”

Lopez is now the sole earner in his family, as his wife, who worked at a fast food restaurant before the pandemic, is now a stay-at-home mom for their kids, ages 1 and 2. For them, that extra savings is crucial.

Lopez doesn’t qualify for the Supplemental Nutrition Assistance Program (SNAP)—he earns slightly more money than the cutoff threshold—but his wife and children do. Their monthly allotment is a little under $400, but even with regimented meal planning and carefully editing, their grocery list often costs between $500 and $600 a month.

“Prior to the pandemic, a lot of people were making really difficult decisions between paying rent or buying food. The pandemic has made those decisions even more challenging.”

The Lopez family is part of a growing number of Americans who are leaning on SNAP benefits to get by this year. In early March, before the closures in the U.S., 37 million people received SNAP benefits. According to the most recent data available from the USDA, that number rose 15.8 percent to 43 million people the following month.

One thing that Lopez has found helpful in making the most of his family’s benefits is a new mobile app designed to help users locate the cheapest groceries in their area.

Called Forage Grocery, the app prompts users to select stores in their neighborhood, upload their grocery list, and it will populate the list with prices of those items, alongside coupons for those goods or cheaper alternatives, like a white label brand, if available. Having the side-by-side totals allows users to decide which store to visit. It does not, however, cover hot food at this time.

“The two things that we’re solving for are time and money,” Justin Intal, the founder of Forage, told Civil Eats. He describes his user base as both “[financially] poor and time poor.”

In California alone, the state with the highest number of SNAP recipients, an average of 4.1 million Californians were living in households that received at least some food stamp benefits each month pre-pandemic. By October 2020, that number had risen by 20 percent, to over 4.5 million. And as of August 6, roughly 10 million Californians were experiencing food insecurity, one in three kids were in a food-insecure household, and more than 40 percent of families with young children under age 12 weren’t getting enough to eat—up from 15.1 percent in 2018. 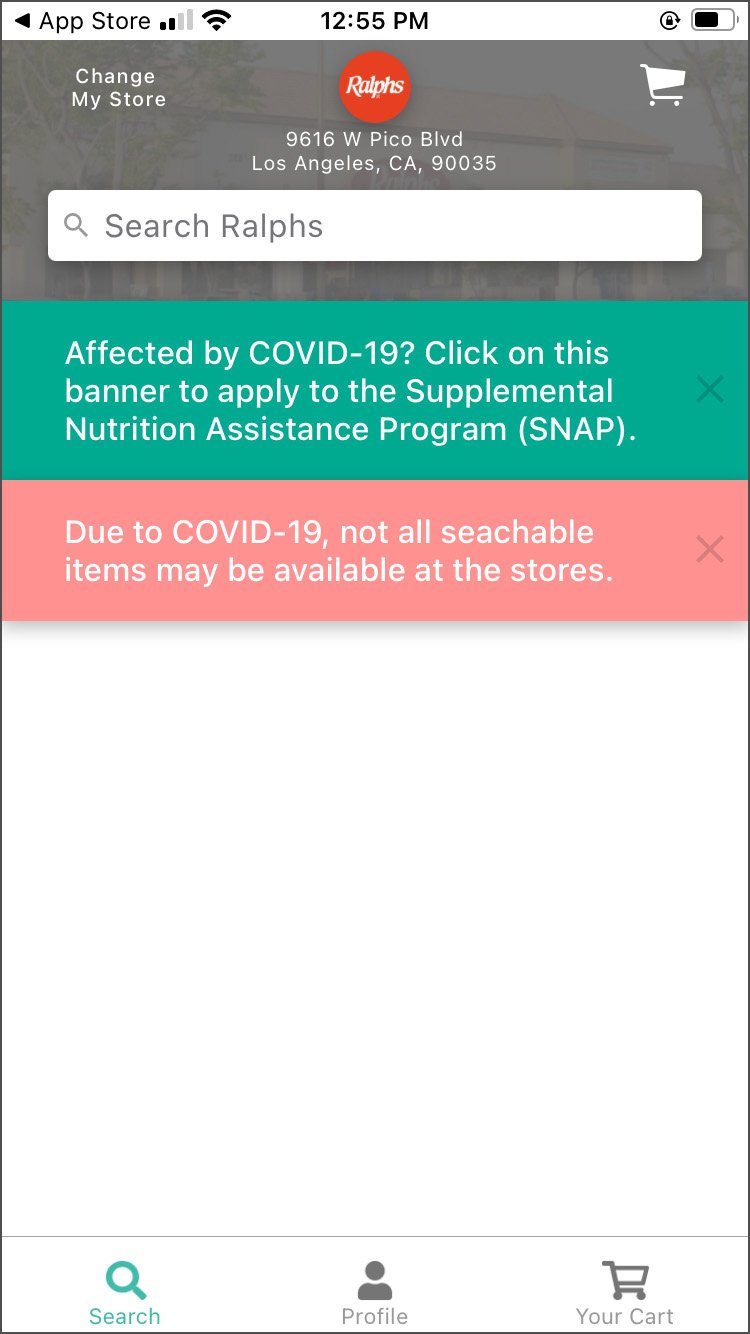 A screenshot from the Forage app shows how users can sign up to receive SNAP.

While SNAP benefits help put food on the table, they aren’t quite enough. Studies have shown that the funds are often exhausted before the start of the third week of each month, leaving recipients to make difficult decisions about where and how to spend their money.

“Prior to the pandemic, a lot of people were making really difficult decisions between paying rent or buying food. Or whether they would use their money to pay utility bills or buy food,” said Amanda Schultz Brochu, vice president of the San Diego Hunger Coalition. “The pandemic has made those decisions even more challenging.”

Right now, the app is only available for stores in California (Walmart, Ralph’s, Food 4 Less, Albertsons, Vons, Safeway, and Pavillions, with more being added every week), but Ital and his team are working on scaling up.

“We’re trying to cover where the most need is for now,” Intal said.

In the coming months, he hopes to add stores throughout the state, before expanding to New York, where SNAP user data suggests the density of need is next greatest. In doing so, they’ll be able to expand more easily to New Jersey and Pennsylvania, since those states have similar stores.

While the app is available for free to anyone, the target market is SNAP users. “They’re the ones who need to save money the most to maximize their benefits,” Intal explained. According to Intal, the median price of a nutritious meal is more than $3.02, whereas SNAP users receive roughly $1.44 for each of their three meals per day.

The business model behind the app is based on a membership fee charged to the participating retailers—meaning it’s a pay-to-play model. It doesn’t currently include advertisements, but could in the future, and Intal said the company will need to find additional revenue streams as they scale up.

Forage Grocery is also working in conjunction with food security organizations including the San Diego Hunger Coalition, 211 California by United Way, CalFresh Initiative, Basic Need Initiative, eatfresh.org, No Hungry Kid, and others to share the application with those who need it the most. Part of their partnership includes running banners in the app connecting users to additional resources, like Feeding America, an organization that helps people find their local food bank and CalFresh.org, which helps people apply for food stamps.

Jacqueline Hess, the program manager at the San Diego Hunger Coalition, was instrumental in helping Intal and his team during the developmental stage of building the app, reviewing the materials, and inviting Intal to present during a task force call with other California organizations that assisted SNAP recipients.

“Forage is one of the many tools that really empower low-income communities to better meet their food needs by stretching their budget just a little further,” Hess said. “I think until we have more equitable wages allowing families to meet their basic needs, we really see this as a critical tool for them to be able to identify cost alternatives.”

Food assistance programs aren’t without other obstacles. In addition to providing limited funds, the programs can also be challenging to enroll in. Although these programs have become more flexible in who can receive benefits and how—for instance, applicants are no longer required to do face-to-face interviews, which expedites the process—they still require applicants to jump through multiple hoops.

“Another shortcoming of the SNAP program [is that] there’s some intimidating language that prevents eligible immigrant families from applying for the program,” Hess said, referring to the Public Charge Rule enacted by the Trump Administration, where immigrants to the U.S. may be denied visas or permission to enter the country due to disabilities or lack of economic resources (the rule is currently being litigated nationwide). “They’re hesitant to go through that process, not knowing how that might affect them and their family members.”

While it’s challenging to get information at the hyper-local level, the Hunger Coalition said they’ve recently been digging into local unemployment claims. Since the beginning of the pandemic, one-third of the San Diego working population has applied for unemployment. While it’s difficult to conclusively prove causation versus correlation between unemployment numbers and SNAP applications, Joseph Shumate, director of communications for San Diego Hunger Coalition, said “unemployment is a fairly good indicator of food insecurity and, in fact, is one of the indicators we use in calculating regional food insecurity.”

The people who are the most impacted are those who have the lowest levels of education—those who have a high school diplomas or less make up 46 percent of the unemployment claims.

Additionally, Schultz Brochu pointed out that food insecurity is disproportionately affecting communities of color. Both the Black and Latinx populations are experiencing 31 percent food insecurity, compared to 25 percent of the general population.

While the company itself is not doing any direct outreach to non-English-speaking households, Forage is piggybacking on outreach programs already established by community partners to get the word out, particularly in marginalized communities. The San Diego Hunger Coalition, for example, does localized outreach by working with subcontractors to increase enrollment and help people to apply.

“This is effective because we work with organizations embedded in communities that are trusted by residents and have the language skills necessary to assist non-English speakers,” Shumate said.

One silver lining, Intal said, is that recent changes in legislation let people use their benefits to purchase groceries online for home delivery, helping them save time and creating a safer shopping experience.

In March, roughly 35,000 people receiving SNAP benefits bought food online. By June that number had risen to over 750,000, an increase due to the expansion of online SNAP availability to many new states as well as a greater number of people enrolled in the program.

While the need has been greater this year, Dr. Craig Gundersen, a professor at the University of Illinois who has authored numerous studies on food insecurity and SNAP, believes that apps like Forage will continue to be useful well past the pandemic and the economic collapse it’s brought about.

“I think it might help increase access and encourage people to apply,” Hess said, adding that people who are struggling to meet their basic food needs often aren’t aware they qualify. The app includes links to direct people to programs like the San Diego Hunger Coalition for additional information and help.

Because Forage is an app, it does require a smartphone to use, which may be a non-starter for some low-income homes. But it’s only one tool in the arsenal of dedicated application supporters who can walk SNAP recipients through their other options.

So far, the app has proven to help stretch those who use its budgets, even if the savings are modest. As of early October, Forage Grocery had over 6,500 users and more than $175,000 in tracked savings.

“Twenty dollars a month might not sound like a lot to most people, but it’s a lot to me,” Lopez said.

Bailey Berg is a freelance features and news writer based in Anchorage, Alaska. Her work has been published in The New York Times, The Washington Post, The Guardian, and more. Read more >