A new, peer-reviewed paper on White Oak Pastures’ practices advances our understanding of the climate impact of beef and the potential for regenerative grazing to store carbon in the soil.

At White Oak Pastures, an eastern Georgia-based sixth-generation farm, Will Harris “went rogue” and began to transition away from industrial cattle ranching 25 years ago. Since then, Harris has been rotating organic cattle, chickens, and pigs on 3,000 acres of pasture in an effort to improve land degraded by years of conventional cotton and peanut production.

Comparing his black soil to the red soil only yards beyond the fence he shares with his neighbor, Harris said in a recent phone call: “They look like they came from two different planets.” 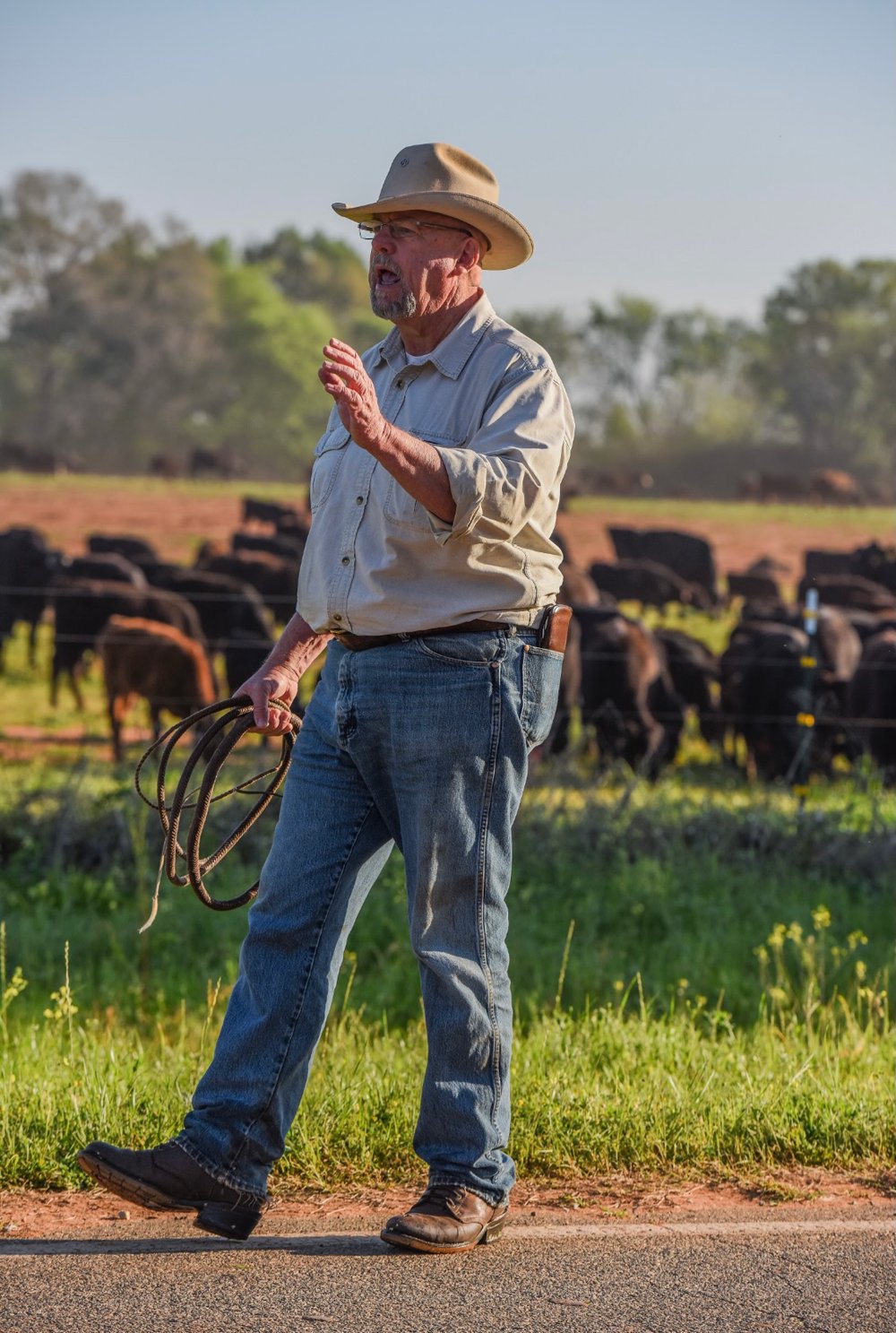 Will Harris walks beside his regenerative beef

Now, White Oak Pastures is at the center of a larger conversation about the climate impact of beef and the power of regenerative grazing to store carbon in the soil.

In 2019, White Oak and General Mills, which buys the ranch’s beef for its Epic jerky line, published a life-cycle analysis by Quantis, a sustainability consulting group, which claimed the farm “offsets at least 100 percent of [its] grass-fed beef carbon emissions and as much as 85 percent of the farm’s total carbon emissions.”

Beef production is a significant source of methane, a potent greenhouse gas, and livestock is responsible for 14.5 percent of human-caused emissions globally, according to the United Nation’s Food and Agriculture Organization (FAO). So, the promise of a practice that offsets that methane by storing carbon in the soil is tantalizing to many consumers and industry insiders.

White Oak Pastures promoted its “carbon negative footprint” in the wake of press reports questioning the validity of carbon neutral beef amid the regenerative agriculture boom. In recent years, awareness of regenerative practices have been picking up as several groups rush to create labels and certification schemes for farms that claim to be improving the soil and working to draw carbon out of the atmosphere. With so few quantitative studies yet conducted, however, the Quantis claims yielded a fair bit of criticism. But it hadn’t been peer reviewed—until now.

In November, a group of eight scientists published a comprehensive, peer-reviewed life cycle analysis on the research done at White Oak Pastures. The findings confirm that multi-species pasture rotations sequester enough carbon in soil to create a greenhouse gas footprint that is 66 percent lower than conventional, commodity production of beef. The catch is that the regenerative approach requires 2.5 times more land.

The difference, says study co-author Paige Stanley, occurred because the Quantis analysts applied the rate of carbon sequestration solely to beef, while this paper included nutrient inputs and emissions from all the animals in the system.

“It’s a hell of a lot of carbon,” says study co-author Jason Rowntree, a researcher at Michigan State University. “But when you combine all of the different proteins, the emission footprint is considerably lower, with a land tradeoff that must be addressed.”

Rowntree hopes to see the approaches used on operations like White Oak scaled up to improve more land, along with simultaneous work to reduce the overall footprint of beef production.

The new peer-reviewed study looks at the multi-species rotational grazing done on the ranch and found that White Oak’s approach reduced net greenhouse gas emissions of the grazing system by 80 percent. Regenerative practices helped sequester 2.29 megagrams of carbon per hectare annually. To put that into context, sequestering just 1 Mg of carbon per hectare each year on half the rangeland area in California would offset 42 million metric tons of carbon dioxide equivalent, roughly the annual emissions from energy use for the state’s commercial and residential sectors.

Still, a lingering debate—about the degree to which regenerative agriculture is a climate change solution, given the added land use—predictably flared up on social media once the new paper was published. The beef over beef production can get heated. Critics were quick to note that the study did not confirm net negative greenhouse gas emissions at White Oak Pastures.

Further, some suggested widespread adoption of regenerative agriculture could drive further deforestation to meet beef demand. For example, Richard Waite, a senior researcher at World Resources Institute (WRI), pointed out that converting cropland to grazing land will sequester soil carbon for a while, but the growing global demand for crops would limit the ability to realize conversion at the massive scales needed.

For Stanley and her colleagues, the bottom line is simple—the sequestration rate is meaningful, especially since grasslands play such an important role in storing carbon. In fact, new research finds that sustainable, optimized grazing and restoration of degraded pasture will be crucial to maintain the cooling effects of grassland carbon sinks.

“People will read [the study] and take the conclusion with them that fits whatever they already think—whether it be land sparing, land sharing, rewilding, half-Earthers,” says Stanley, a University of California at Berkeley Ph.D. student, highlighting some of the more vocal conservation and food production factions.

No one is denying the improvements shown across soil health metrics, adds Stanley. But people who view food production solely through a lens of feeding up to 10 billion people by 2050 tend to focus on the land area needed to do that, she says. But improving degraded land is also a critical need for future production. And beef raised using rotational grazing is more expensive than conventional commodity beef, and that fact could reduce over demand for it. “At its core, [the argument] is more a question of values rather than whether or not things improve under [the White Oak] model,” says Stanley.

The contention surrounding regenerative agriculture’s climate benefits is complex, multi-faceted, and only heightened given efforts to create market incentives around carbon. “Part of it is putting a dollar value on [the carbon sequestered],” says Rowntree.

“The ‘regenerative’ piece, specifically, is even more contentious because there have been some unscientific claims made about the benefits of regenerative ag,” says Stanley.

Steve Rosenzweig, a soil scientist at General Mills, which funded this research, says regenerative agriculture is the best way to meet the company’s goal of reducing greenhouse gases emissions by 30 percent by 2030. “We have to be producing food while building resilience and rebuilding the health of ecosystems. Just focusing on efficiencies or maximizing production doesn’t get us to resilience or adaptation,” he adds.

What gets lost when the debate focuses solely on carbon, however, is that rebuilding degraded soils is crucial for future food production. “Regenerative agriculture is an unqualified success, but it’s not a silver bullet to every single problem we have,” says Jon Foley, executive director of Project Drawdown.

“Regenerative agriculture is an unqualified success, but it’s not a silver bullet to every single problem we have.”

Rowntree says it’s most appropriate to implement regenerative models in areas where they can help food security and sovereignty without taking away from the bigger burden of feeding a growing population. He points out that regenerative grazing systems are phenomenal in marginal landscapes. “We’re not going to go into 250-bushel corn fields and do this,” he says.

Jeff Goodwin, conservation stewardship leader at the Noble Research Institute in Ardmore, Oklahoma, agrees. “What do you do with landscapes that aren’t suited for crops for human consumption?” he asks—answering that turning it into high-quality protein and new land-based carbon sinks is a tremendous opportunity for agriculture. Urvashi Rangan, co-chair at Funders for Regenerative Agriculture, a national initiative of funders and investors promoting regenerative agriculture, agrees. “Land is a resource. We use land. We should use it well,” she adds.

The focus on carbon is understandable. Agriculture is the only one of the carbon-emitting industries that can mitigate its own emissions, says Goodwin. Yet, land-based sinks currently soak up only 24 percent of atmospheric greenhouse gas emissions, according to Project Drawdown’s latest primer, “Farming our way out of the climate crisis.”

The White Oak study demonstrates that while agricultural lands may not function as giant sponges that soak up society’s carbon pollution, regenerative techniques are also a fantastic way to reduce nitrogen runoff, improve water quality, and create and improve habitat for biodiversity, says Foley. “The focus solely on carbon misses the big picture,” he adds.

“I agree that carbon is the elephant in the room, but there’s a whole herd of other animals on the prairie that matter, too,” says Goodwin. “We’re building more diversity on the planet—increasing wildlife and pollinator habitat—and that’s a good thing,” he adds. And, he says, there is a cascading dynamic of positive responses when organic matter is increased. “The value to a producer [in the form of greater water infiltration or healthy soil microbes] is much more than we could pay them for the carbon,” he notes.

White Oak Pasture’s Harris looks beyond what he calls “scientific quibbles” over the amount of carbon sequestered. To that end, this life cycle analysis doesn’t account for the other soil, water and microbial benefits regenerative agriculture provides, neither does it account for the negative impacts of conventional beef production. The calculations around conventional beef production system has, for example, never included the cost of antibiotic resistance, even though 80 percent of antibiotics go into animal production, says Rangan. For example, she points to the human and environmental health concerns that stem from managing the manure.

“Let’s imagine how food systems can do the most good for people and the planet with the least harm into the future.”

Waite, of WRI, says he would love to see the conversation evolve from “how do we make agriculture regenerative,” as if that’s the silver bullet, to “how can we feed a growing population while greatly reducing agricultural emissions and increasing land-based carbon sinks, and building resilience to climate change.” If we do that, he says, then regenerative practices clearly fit in to the picture, but aren’t the whole picture.

Maybe, says Foley, it’s time to focus on the shared common goals around the food system, which is complicated. “Let’s imagine how food systems can do the most good for people and the planet with the least harm into the future,” he says.

For Harris, the ability of rotational grazing to also retain water and prevent erosion is crystal clear—literally. Last week, he shot a video of the temporary pool created after rain washed through the region around his ranch. In the footage, water that had moved through White Oak Pastures runs clear, while that running off his neighbor’s property is muddied with eroded soil. “It’s not all about carbon; that’s just one component,” says Harris. “The benefits of our land management practices are way more complex than that.”

Correction: This post originally read that cattle was responsible for 14.5% of of human-caused emissions globally. In actuality, it’s all livestock.