The celebrity chef has come full circle as a food access advocate in her new role at Farm to Pantry, gleaning food and feeding the hungry in her community.

“It’s pretty incredible what the power of many small acts can do,” says Duskie Estes, the executive director of Farm to Pantry, a nonprofit organization that focuses on gleaning community gardens and farms to feed the growing number of food insecure people in Northern California’s Sonoma County.

On a recent fall morning, she and a half-dozen volunteers were out early gathering the last zucchini, tomatoes, and eggplant on Farm to Fight Hunger, a six-acre property owned by Bruce Mentzer in Healdsburg, California.

In a region where other crops are often replaced by wine grapes, Mentzer made the rare choice to pull up a vineyard to create the nonprofit farm. All of the produce grown here goes to food pantries and other community organizations serving people in need.

This year, Mentzer grew five tons of produce—the equivalent of 40,000 servings of vegetables—and donated more than 10,000 eggs. Much of that was donated to Farm to Pantry.

Farm to Fight Hunger is just one of the several hundred properties Estes and Farm to Pantry visited this year to collect surplus. Along the way, she’s creating community partnerships and long-term networks to ensure that more food ends up on tables than in landfills.

The ancient practice of gleaning—collecting crops from fields after commercial harvest—is described in the Old Testament, which commanded Hebrew farmers to leave a portion of their crops for others. The Biblical tradition continued into modern times in France and England, where the rights of the rural poor to glean leftover crops from nearby farms were enforced.

Today, gleaners are mostly volunteers who are granted permission to gather food at farms, orchards, and backyard gardens to ensure that post-harvest leftovers aren’t plowed under or left to rot.

And it’s desperately needed. Like most communities facing economic stress and skyrocketing hunger during the pandemic, Estes estimates 1 in 3 people in Sonoma County are facing food insecurity, which has also been hard hit by recent wildfires. Undocumented farmworkers working in the wine industry have been especially impacted, and are hesitant to make use of these services, says Estes, who has worked to bring food to that community through partner organization Corazón.

While food-pantry lines have grown exponentially, many local farmers lost their market partners as nearby restaurants were shuttered by the pandemic, leaving massive amounts of produce in the fields. In the United States, up to 40 percent of food is wasted under normal circumstances, with a vast amount occurring on farm fields.

With food banks running out of food, Estes saw a natural match at a critical moment, and she jumped at the chance to activate her background and connections in the food and farming community to rescue food for those in need. 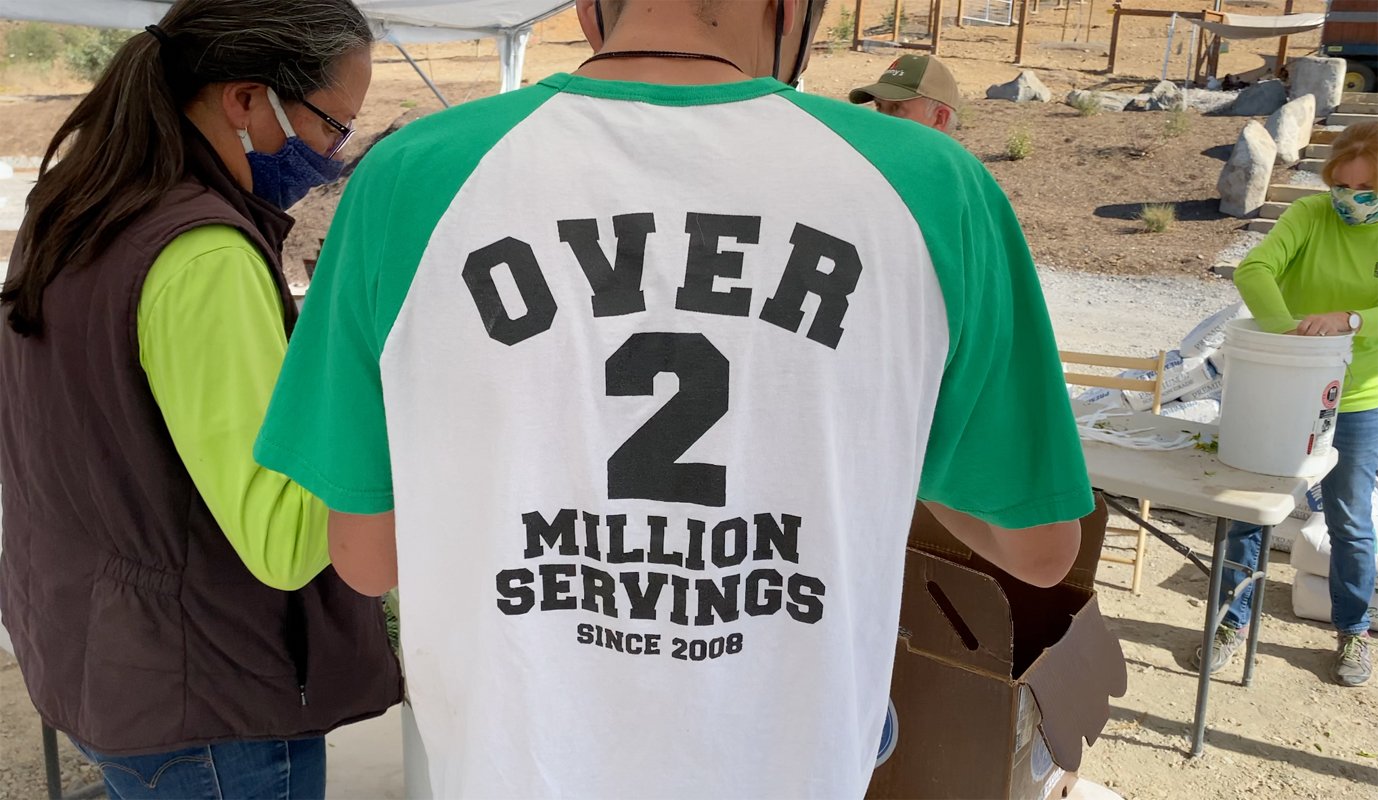 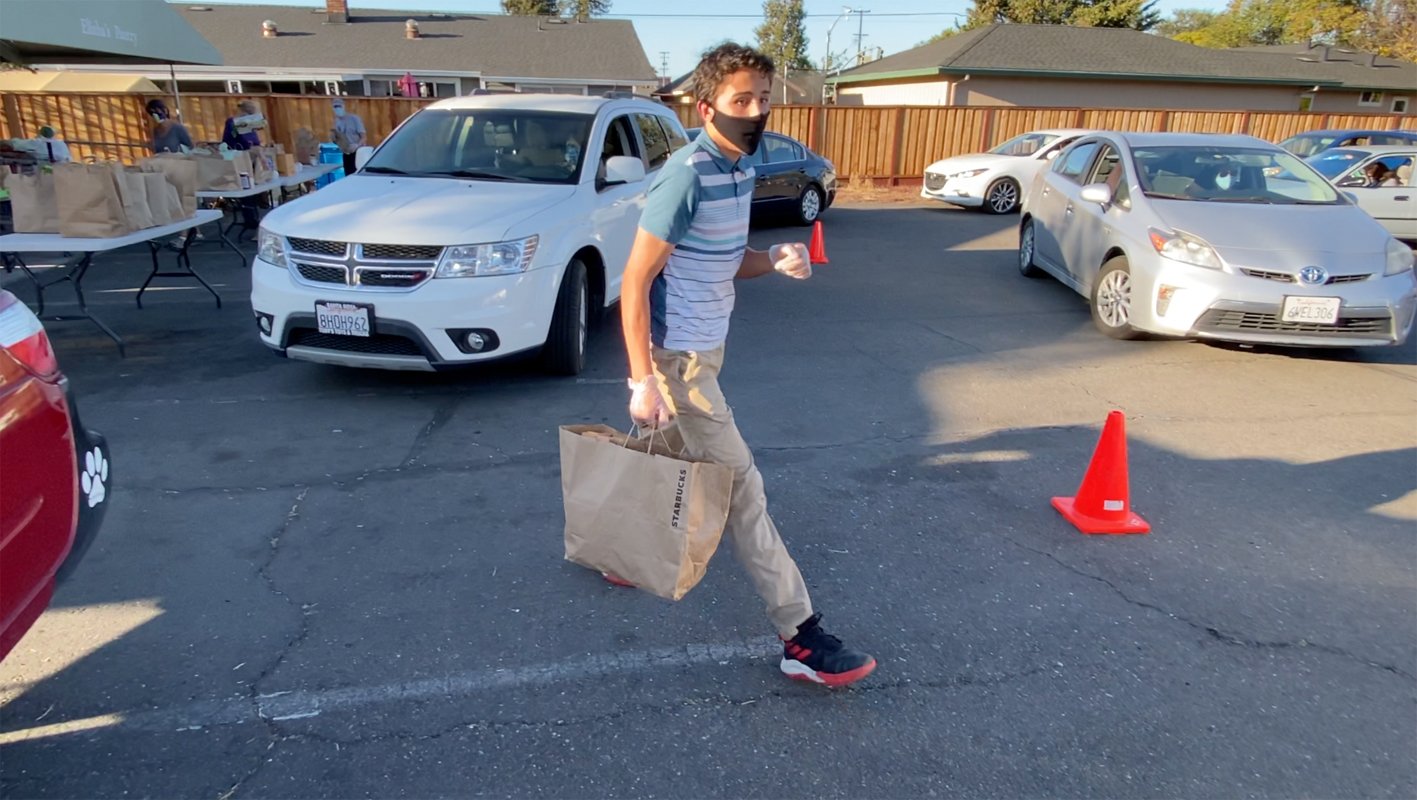 “This is not waste, this is beautiful produce,” says Estes. “We only deliver delicious food we would eat ourselves.” She acknowledges the criticism of short-term solutions to food security or that solving hunger and food waste together is an easy fix. But Estes sees this as a win-win for farmers and growers who want to feed people in the immediate term. “This work is critical,” she says. “This is a safe way to give back in the time of the pandemic.”

This year, Estes and her team harvested 200,000 pounds of produce, serving more than 800,000 servings of fruits and vegetables.

It’s not the first time Estes has focused on feeding people. She has spent a long career as a well-known celebrity chef, appearing on the Food Network, writing award-winning cookbooks, and running acclaimed restaurants. Earlier in her career, Estes worked in a variety of mission-driven roles, including positions at Share Our Strength, where she organized and led a direct service program for chefs in hunger relief, now known as Cooking Matters; humanitarian chef José Andrés was one of the first volunteers in her program. She also ran the kitchen at Glide Memorial Church in San Francisco, serving up to 3,000 people a day.

On this day, Civil Eats traveled with Estes to deliver the freshly harvested food to Catholic Charities of Santa Rosa, where a small kiosk has been set up in the lobby, showcasing the free food for everyone in need. A young, pregnant couple stops by to pick up a bag of tomatoes.

“Beautiful food! It smells delicious,” another young woman says, as she packs her grocery bag high, saying she’ll share the goods with her family. Catholic Charities normally serves around 1,000 people per month with food. Since the economy has crashed, that number is up to 1,700.

“The food is out there, and no one should be left behind. We just have to go get it.”

Later in the day, Estes delivered the freshly picked produce to Elisah’s Pantry, a food pantry built by a partnership of three congregations, Congregation Shomrei Torah, Christ Church United Methodist, and Bethlehem Lutheran Church. Twenty cars are already lined up ahead of the pick-up time at 4 p.m.—some days the parking lot is full an hour before the distribution begins. That day, around 90 households will receive some of Farm to Pantry’s produce. 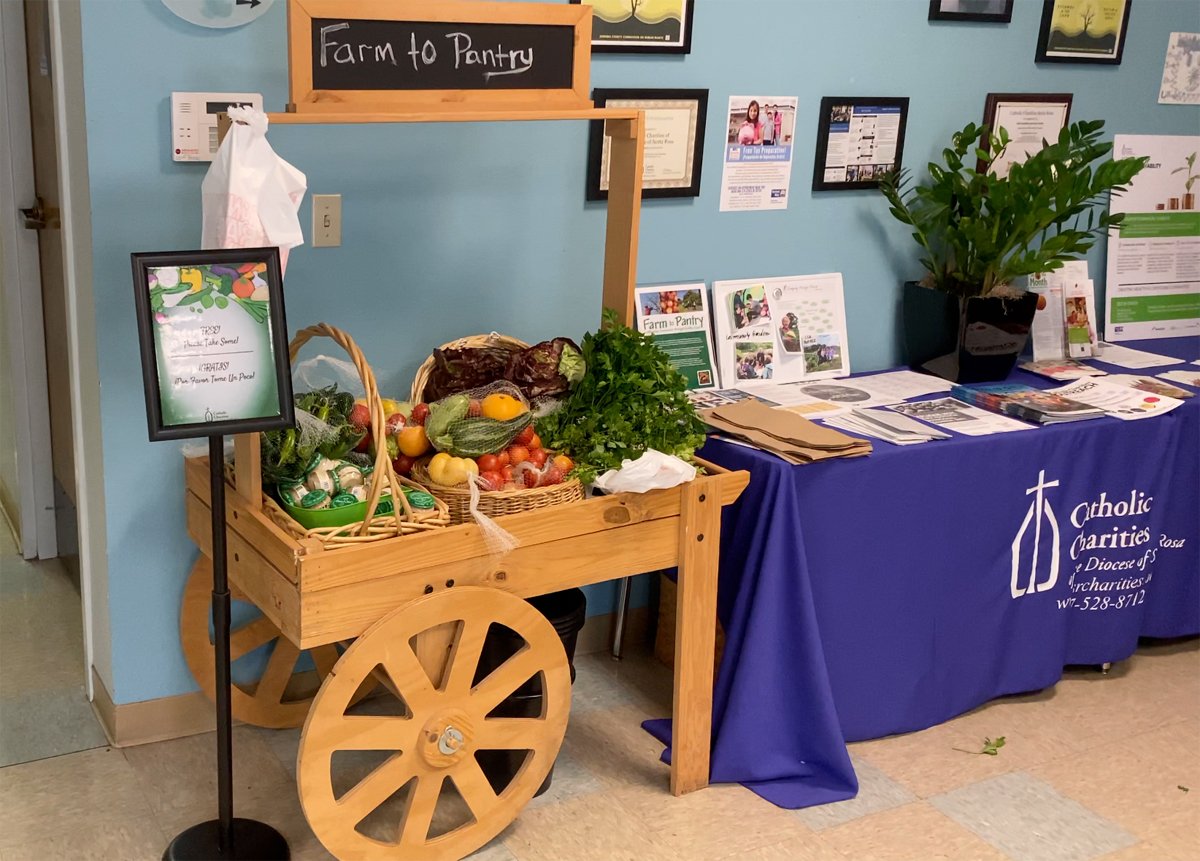 “We’re so excited when Duskie and her team come,” says Elisha’s Pantry coordinator Lien Cibulka. “It’s really amazing what they’re doing. They’re gleaning produce so it’s not wasted and we can provide it to our community.”

Some of the day’s harvest will also be delivered to other partner organizations that will cook and prepare it into meals for homeless shelters and others who don’t have access to kitchens.

At the end of the long day, Estes is still energetic, as she shares her vision to get more farmers, givers, and gleaners involved. And as the coronavirus-driven economic crisis continues, and an estimated 54 million Americans—including one in four children—don’t have enough to eat, it’s work that will be needed far into the future.

“The food is out there, and no one should be left behind,” says Estes. “All we have to do is go get it.”