The Quapaw Nation's Casino Farms Its Own Food | Civil Eats

A stone’s throw from the blackjack tables, bison are grazing, beehives are buzzing, crops are growing—and nature is winning.

This article originally appeared in Reasons to Be Cheerful, and is reprinted with permission.

On the surface, Oklahoma’s Downstream Casino Resort looks like any other: lines of brightly lit slot machines snake past entrances to steakhouses and sports bars, while cocktail waitresses shuttle trays to craps and blackjack tables. A takeaway café serves gourmet coffee, and an all-you-can-eat buffet is stacked with prime rib on Saturday nights.

But beneath this familiar facade is a very different kind of system—one that applies traditional Indigenous food and farming principles to modern hotel operations. The Quapaw tribe, which runs the Downstream Casino Resort, operates seven greenhouses and two sprawling gardens that provide the hotel with 20 varieties of vegetables and herbs. The tribe also has an apiary with 80 beehives, as well as a craft brewery and a coffee roaster that supplies the hotel and casino.

The Quapaw is also the only tribe in the United States with its own USDA-certified meat packing and processing plant, where it processes bison and cattle that it raises on open pastures, selling the bulk of it to the casino’s five restaurants. The rest is provided to the two tribal-run daycares, the Quapaw Farmers Market, the Quapaw Mercantile, and a few other tribally-run shops. 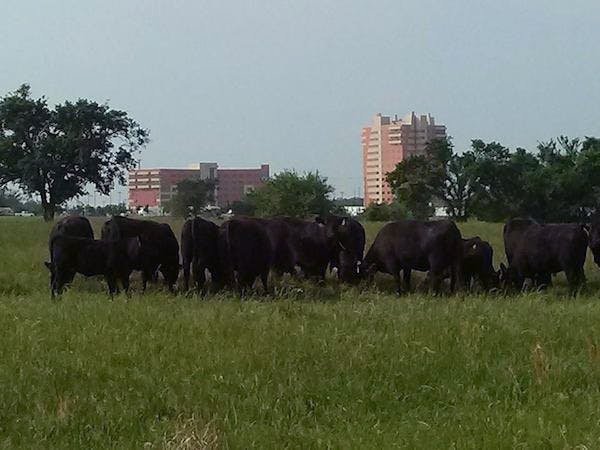 With all these businesses—plus a construction firm—the Quapaw Nation is one of the largest employers in this part of Oklahoma, employing 2,000 tribal and non-tribal workers, while paying above-average wages and offering a full benefits package to all full-time employees. It’s a business model that preserves cultural heritage while providing a profit.

Lucus Setterfield, director of food and beverage at Downstream, says 50 percent of the food served at the resort’s Red Oak Steakhouse comes from the Quapaw land. Even the mint in the restaurant’s mojitos is grown in the greenhouses.

“The Quapaw are one of the most innovative tribes in the country when it comes to food sovereignty,” says Maria Givens, the communications director of the Native American Agricultural Fund (NAAF).

Innovative as it may be, the Quapaw are essentially resurrecting a way of life—living off the land that sustained them before they were driven off of it by settlers. Colonization—and the policies that created Indian reservations—deprived them of their traditional foodways of foraging, fishing, and hunting and disrupted their long-established patterns of intense physical activity. Public health experts believe that these are two of the reasons Indigenous people have some of the highest rates of diabetes in the U.S. According to the CDC, Native American adults are three times more likely to be diagnosed with diabetes than white adults, and 1.6 times more likely to be obese. 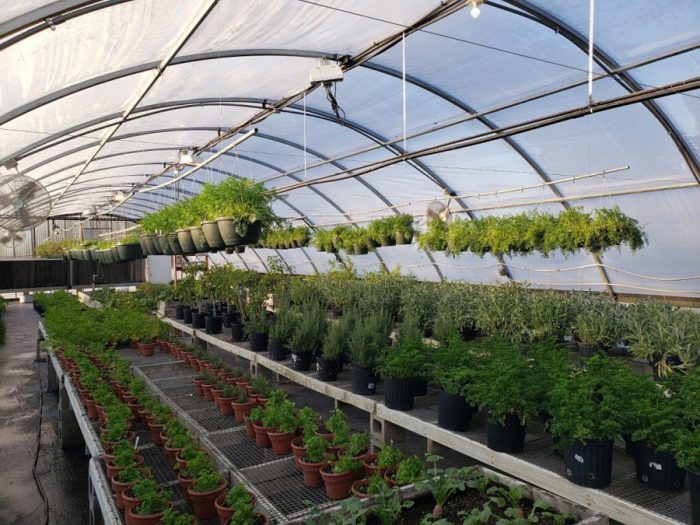 With seven greenhouses and two gardens, the Quapaw gardeners harvest about 6,000 pounds of food per year. Each morning, the resort’s chefs stop by and place their orders. (Photo courtesy Downstream Casino Resort)

By retrofitting a modern resort with a system of locally sourced, sustainably raised food, the Quapaw are reclaiming their food sovereignty and, at the same time, benefitting every guest who visits their resort, whether those guests know it or not.

It all started in 2010 when then tribe chairman John Berrey, a fifth-generation cattle rancher, had a vision to reintroduce bison to this part of Oklahoma. The bison is the state mammal, but it’s also a traditional food for the Quapaw people, who lived in Northeastern Arkansas and then western Missouri before eventually moving to Oklahoma.

That year, the tribe was given eight bison from Yellowstone National Park via the InterTribal Buffalo Council. Now, 10 years later, the tribe has a bison herd of close to 200 as well as a herd of 385 Black Angus cattle. (The bison have been breeding, but the tribe has also gotten additional bison from other national parks.) Both are pastured on fields of native grasses and the ones that are headed for slaughter are finished on grains and mushrooms. The tribe processes only five to 15 bison per year and doesn’t slaughter until they’ve sold out of every type of meat: steaks, ground bison, chuck roast and bison jerky.

“We use the whole animal,” explains Quapaw Nation grants coordinator Shelby Crum—even the hides, which a Quapaw artist decorates with tribal paintings and sells at the farmers’ market.

The 25,000-square-foot meatpacking plant, which opened in 2017, was designed to conform to renowned animal scientist Dr. Temple Grandin’s blueprint for humane animal handling. The Quapaw built the processing plant adjacent to the feeding facility to avoid the need for transport, which makes animals nervous. It also uses Grandin’s designs for curved chutes with high walls, which minimizes stressors, and the holding pens include extra crowd gates and bright colors. In addition to processing its own animals, the plant processes 50 to 60 head of cattle per week for nearby ranchers from Oklahoma and Missouri. 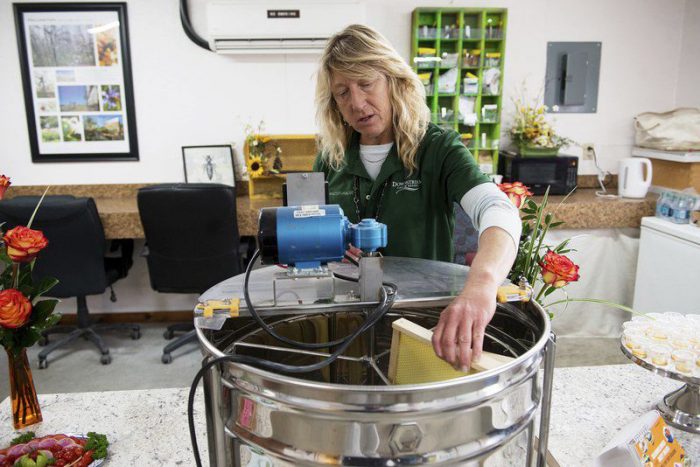 A worker processes honey from one of the resort’s 80 beehives. (Photo courtesy Downstream Casino Resort)

The meat is broken apart into different cuts, smoked, flavored, and packaged right there at the facility, which also has freezers and coolers for storage. Most is sold at a discounted price at tribally-owned retail outlets like the Quapaw Mercantile, the farmers’ market, the Quapaw C-Store, and the Downstream Q-Store. “The whole goal is to make it affordable,” Crum says. That said, anyone from any state can order the meat via the Quapaw Cattle Company’s online store.

The first greenhouse went up in 2013. Today, with seven greenhouses and two gardens, the Quapaw gardeners harvest about 6,000 pounds of food per year. Each morning, the resort’s chefs stop by and place their orders.

Setterfield, who has worked at Downstream since it opened in 2008, says the greenhouses have provided cost savings, but the biggest benefit is the freshness. “It’s great for things that might not travel well—micro-greens and herbs. Herbs, especially, are 10 times better the day you pick them,” he says.

Some produce is also sold at the Quapaw farmers’ market, held on the first and third Friday of the month. An additional 10 to 15 vendors from the surrounding community sell their produce, eggs, honey, and meat at the market. The farmers’ market also accepts SNAP, which makes it easier for Quapaw members—and non-tribal residents—to access fresh, affordable, locally grown produce.

“There’s no grocery store in Quapaw,” says Crum. “You can drive six miles away to Miami, [Oklahoma], which has a Walmart, but if you’re sharing a car with your spouse or you have no vehicle, six miles can be a huge barrier.” 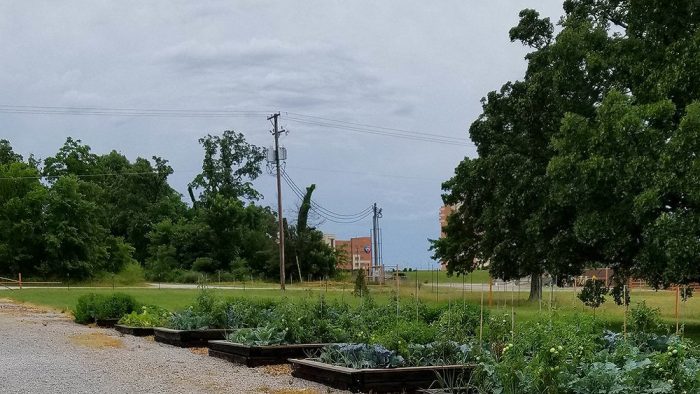 “We want the focus to be on growing edible foods. Growing foods for your family, for your tribes—medicinal foods and medicinal plants. That’s our goal,” says the tribe’s grants coordinator. (Photo courtesy Downstream Casino Resort)

The farmers’ market also runs a food preservation program, funded by a $50,000 grant from the Native American Agricultural Fund, where for $25, shoppers can rent out equipment like a pressure canning kit, a fermenter, a vacuum sealer, or a dehydrator. In conjunction, the Quapaw tribe runs food preservation workshops on everything from how to can pickles and sweet corn to how to make dehydrated zucchini chips. “It’s just another way we’re encouraging that people make their produce last throughout the year,” says Crum.

Like most casinos, Downstream offers guests and staff unlimited free coffee—an expensive perk. “We were spending half a million dollars on coffee per year!” says Crum. Berrey, always interested in cutting out the middleman, saw another opportunity. Instead of ordering the coffee from non-native producers, why not roast it on site?

In 2016, Josemiguel Gomez helped found the coffee roasting program, called O-Gah-Pah. Gomez is not a member of the Quapaw tribe; he’s from Puerto Rico, where he owned three coffee shops of his own. “We fulfill all the needs of the casino, plus all the Quapaw schools, the EMT, the fire station and the gas stations,” says Gomez. The roasting facility also provides all the coffee for Saracen, the tribe’s new casino in Arkansas. Select coffee shops in Oregon, Kansas City and Florida source O-Gah-Pah beans, too. “We are very proud of our product,” Gomez says. “It’s very well represented.”

The Quapaw brewery came out of Setterfield’s chance encounter with a “beautiful tank” at a gaming show in Las Vegas. At the time, he was in the process of expanding Legends, the casino’s sports bar. Today, Legends has four tanks, which brewer Mike Williams rotates five beers through: a Honey Brown Balmer, a Flat Rock Red, a pilsner, a kolsch, and an IPA. The honey brown, the most popular, is unusual in that the flavor changes throughout the year, because the bees the resort keeps are attracted to different blossoming flowers in each season.

“At one point, there was a question of, ‘Should we only use the spring honey?’” recalls Setterfield. “But then we thought it would be kind of cool to not be consistent—to use the product we have available.” Discerning drinkers of the Honey Brown Balmer will notice it is sometimes more amber, slightly sweeter, or extra floral depending on the time of year.

Last year, the NAAF also awarded the Quapaw tribe $50,000 to develop a seed bank. The seed-saving program, which launches this month, is a big deal. Not only are Quapaw farmers creating a library for seeds from all the different herbs and produce they grow, they will also be starting a nationwide seed distribution program. “What we’re hoping to do is to get donations from other tribes and seed banks so that we can support this nationwide,” says Crum. Eventually, the idea is for other Indigenous farmers to save their seeds and send them back to the Quapaw tribe.

“We want the focus to be on growing edible foods. Growing foods for your family, for your tribes—medicinal foods and medicinal plants. That’s our goal,” says Crum.

The tribe has done two food sovereignty surveys of its members—one in 2018 and one in 2019, at the end of the first farmers’ market season. In the first survey, they asked if the members had high blood pressure or diabetes and how many servings of fruits and vegetables they ate. The second survey asked if they ate more fruits and vegetables because of the farmers market, and the answer was a resounding yes. “And they thought it made tribally-produced meat more affordable,” says Crum.

Though it’s too soon to tell if the expanded access to fresh produce and herbs—not to mention food preservation techniques—has helped tribal members reduce high blood pressure, diabetes, and obesity, Crum, who is getting her masters in public health at Oklahoma University, says she will ask those questions in a few years. “That’s more like a five-year question,” Crum says, “once they’ve had enough time to make a change.”

This story is part of the SoJo Exchange from the Solutions Journalism Network, a nonprofit organization dedicated to rigorous reporting about responses to social problems.