Raíces Cooperative Farm is empowering the Spanish-speaking community in the Columbia Gorge to provide for themselves, and each other. 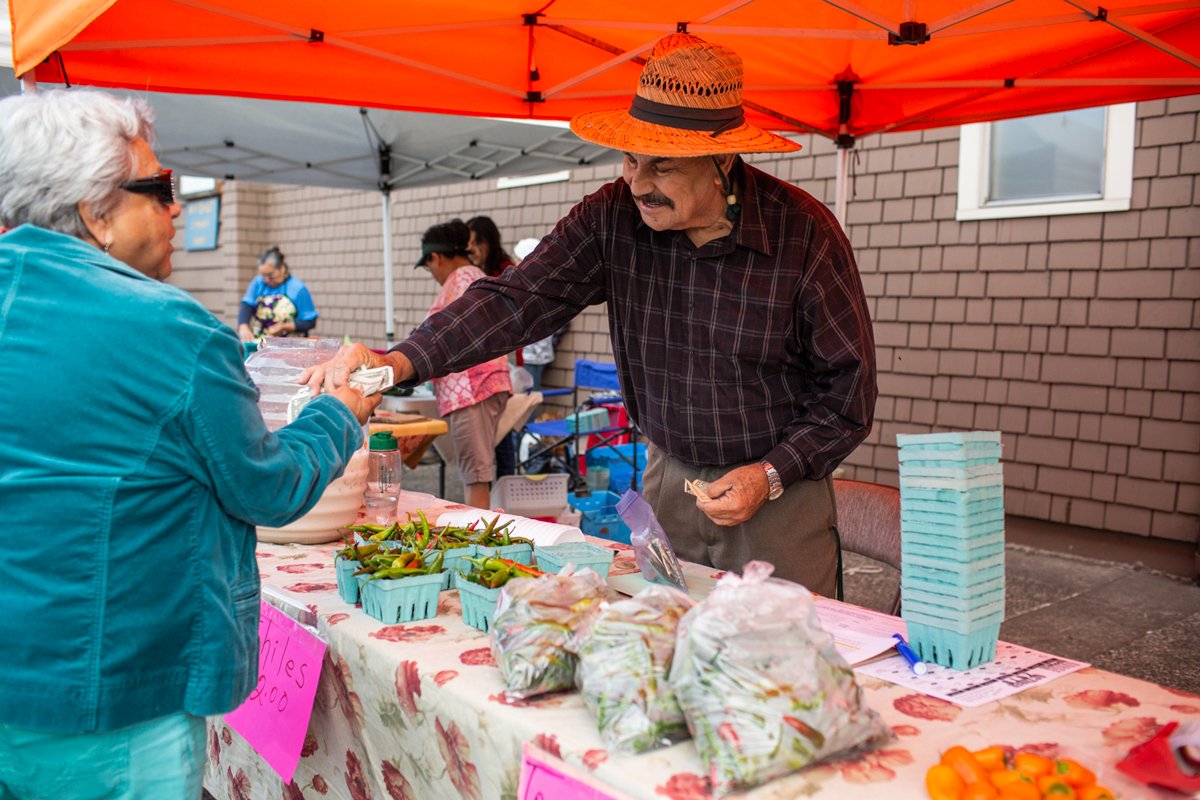 Joel Pelayo has a surplus of beets this year. As a founding member of Raíces Cooperative Farm in Hood River, Oregon, he usually sells his produce at Mercado del Valle, a farmers’ market created by and for the Spanish-speaking community. But because Mercado del Valle has been closed this year due to COVID-19, Pelayo’s family has been sharing extra produce with friends and pickling and preserving his beets with garlic, oregano, and jalapeño.

Like many Latinx* people in the area, Pelayo came to Hood River from Mexico to work in the orchards. Now, he’s one of several lead community health workers at The Next Door, a local nonprofit that fosters community empowerment, and the organization behind the farm. And he’s seen as an elder and mentor in the community, in large part for supporting Latinx farmworkers grow food for their families and earn an income on the side.

The farm is home to 30 Spanish-speaking families who each devote 10 hours a week of garden service in exchange for land to grow vegetables and opportunities to learn cultivation skills.

This year, the pandemic has presented a series of unexpected economic and logistical hurdles. And yet while market access and opportunities for community building have been limited, Raíces is still improving food security in the community.

“It’s great to be able to share during this time,” said Anna Osborn, economic development program manager at The Next Door, who provides staff support for the farm. “I see [farm members] taking home more and gifting their produce to family members and community members.”

Challenges in an Agricultural Community

Agriculture is a primary economic driver in the Columbia Gorge, and 90 percent of the food grown there is exported out of the region. Latinx people make up 32 percent of the Hood River County population according to the official U.S. Census count, but the actual number is likely higher. In Oregon, around one-quarter of the immigrant population is undocumented. And despite working on farms, many farmworkers don’t have enough to eat: A 2015 Gorge-wide survey found 53 percent of farmworkers are food insecure.

Ten years ago, when the Northwest Area Foundation hosted community conversations with a council of local leaders, including Pelayo, they identified “a place to grow food” as a big priority. After numerous listening sessions, focus groups, and several location changes, Raíces settled on two one-acre plots of land in Hood River.

In its early years, Raíces went through an extensive process with guidance from the Northwest Cooperative Development Center to become a cooperative. Its members make decisions collectively using the model of sociocracy, or dynamic governance—a systems approach that prioritizes freedom, equality, and self-determination. 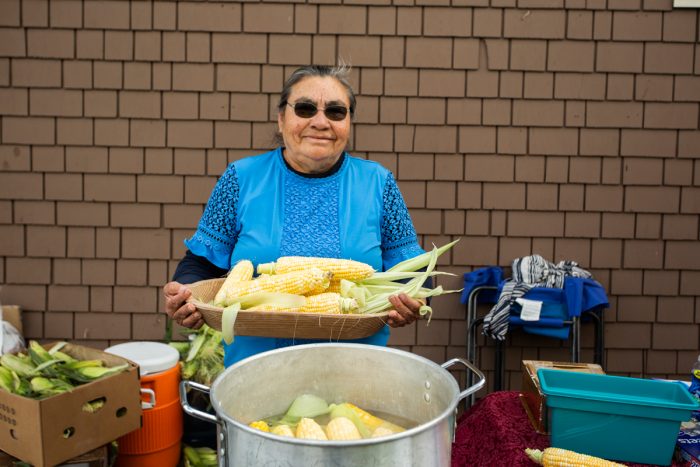 Raíces also collaborates extensively with other local organizations for educational and economic development purposes. The farm partners with the Master Gardener program through Oregon State University Extension Service, which provides workshops on everything from soil health to plant propagation techniques. Many farmers sell their produce through a community supported agriculture program (CSA) and at local farmers’ markets, including Mercado del Valle.

According to a 2018 evaluation, more than 300 people have benefited from produce grown by Raíces. About 3,900 gallons of produce are grown in the two farm locations, and 80 percent of surveyed members reported an increase in their ability to work collaboratively and an increase in the quality of their produce.

For members, like Maria Antonia Placencia de Sanchez, or Doña Toña, as the community fondly knows her, a major benefit to belonging to Raíces is learning from one another. Sanchez remembers learning a trick from another farmer to help improve her corn yield: “He said, ‘You can cut your flowers and they’re not going to [cross pollinate].’ And I did that last year and it works.” 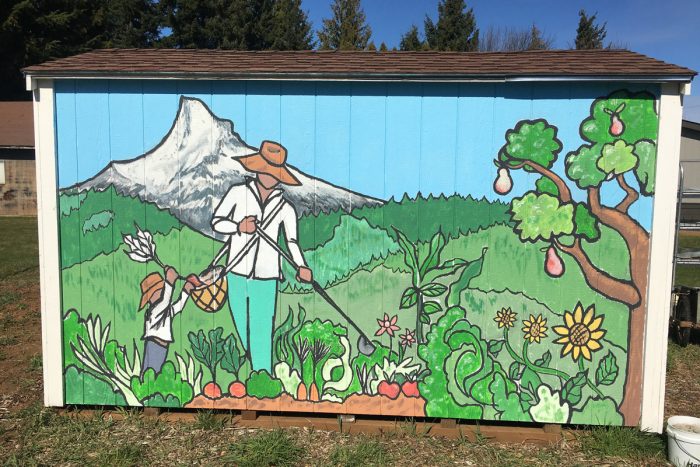 In addition to receiving peer mentorship, Raíces members have historically had the opportunity to cultivate leadership skills. Vitalina Rodriguez became involved in Raíces in 2012 and continues to be a valuable member. The soft-spoken farmer lit up while describing how Raíces has enabled her to grow and sell more food. “Through Raíces, I began to learn better cultivation techniques. [We are shown] how to care for the soil, plants, and seeds, and the program provides economic support.”

Both Sanchez and Rodriguez were raised in rural Mexico and immigrated to the U.S. to work in fruit production almost 30 years ago. When they arrived, they both faced a language barrier. Now, both are respected community health workers at The Next Door and have leadership roles at the farm. Sanchez and Pelayo helped start Raíces, while Rodriguez facilitates workshops in a gardening series called Siembra La Cena (Seed to Supper).

Adapting to the Reality of COVID-19

COVID-19 has not only brought about unforeseen challenges, but it has also illuminated existing inequities. In Oregon, Latinx people account for 12 percent of the population and about 36 percent of COVID-19 cases. The data is similar in Washington and across the country. Latinx people often work jobs without paid sick leave and may be unable to self-isolate if they have symptoms. What’s more, COVID-19 has disproportionately impacted the Latinx community economically, with about half of the Latinx population in the U.S. reporting someone in their household lost a job or took a pay cut. Many Raíces members also work at larger local orchards or fruit packinghouses and have seen a decrease in their hours this year due to COVID-19. 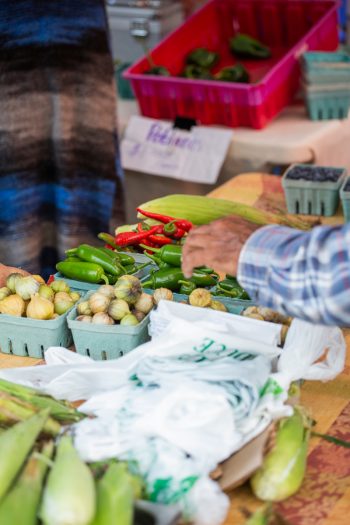 Because Mercado del Valle is closed this year, its umbrella organization, Gorge Grown Food Network, is providing a mobile market that Raíces members are using to sell their produce.

Like most local businesses, Raíces has put measures in place to ensure its members’ safety. All farmers are required to wear masks on site, and only three people are allowed in the shared greenhouse at one time. All in-person meetings have been put on hold, with less frequent phone calls taking their place.

The farm had to modify its annual plant sale fundraiser by offering a curbside sale, where masked and gloved staff delivered pre-ordered plants to customers in their cars. This year’s sale earned $3,000 more than last year’s $14,000, and staff received feedback that this new system was more desirable.

Raíces members also typically pool their produce for a summer CSA for employees of The Next Door. Osborn worked to safely modify the CSA by using minimal indoor space this year, which ran for seven weeks instead of the usual 12. Rodriguez, who did not sell at any farmers’ markets this year, was able to provide blueberries in the CSA boxes for all seven weeks.

Even with these efforts, many farmers had a surplus of produce. They have been taking more home, sharing with friends and family, and selling it to the Gorge Grown mobile market.

Many members of the farm have been active with COVID-related outreach to the migrant and seasonal farmworker community and ensuring the Latinx voice is heard during the pandemic. The Next Door also released a series of educational videos in Spanish, which have been used by local businesses and organizations. Around the state of Oregon, the Columbia Gorge is regarded as a leader in supporting and empowering farmworkers.

“Having worked with [this community] as a social worker, I have seen how they look out for one another and for their community in a way that shows the sort of resourcefulness we should all strive for,” said Oregon State Representative (D-52) Anna Williams of the Columbia Gorge.

Part of the mission of The Next Door is to empower natural leaders, including those “who don’t even necessarily think of themselves as leaders,” said Janet Hamada, the organization’s executive director. Raíces Cooperative Farm is a prime example of this mission.

And for Sanchez and Pelayo, the key to the program’s success is listening to their neighbors. “What’s important is to build on the community’s strengths,” said Pelayo. “So, when you’re teaching something, you [first ask] the people, ‘What do you know about this?’ Once you learn about their strengths and challenges, you start to build on that.”