A decade after writing a book about agriculture's connection to climate change, Anna Lappé interviews the author of a new study that confirms we can’t bring down emissions without addressing the food system.

A new study published in Science offers a stark warning about the climate crisis: Even if we completely halted fossil fuel use in the near term, we would still blow through the carbon budget needed to avoid catastrophic climate change unless we change the trajectory of emissions from the global food sector. Although many have warned about the climate impact of modern food production and land use, this new science is soberingly clear, and it has garnered attention around the world.

Without radically reducing emissions from agriculture, the research shows we won’t meet the Paris Agreement’s goal to limit average warming to 1.5°C – 2°C degrees. And yet, even those targets still position us to face some pretty extreme climate impacts.

Civil Eats talked with Michael Clark, a researcher at the Nuffield Department of Population Health at the University of Oxford and one of the lead authors on the study, about the findings, what they teach us about collective action to move the needle on climate, and how we might build the political will to do so.

Why does the food system have such a big climate toll?

One of the main sources of greenhouse gas emissions from food systems is meat, and within that red meat from ruminants: beef, sheep, goats, and—to a lesser extent—other livestock like pork. The reason why ruminants have a relatively large impact is two-fold: They’re particularly inefficient at converting grass into things we can eat; or, if they’re not being fed grass, converting soy or other feed into food for humans. This matters because you have to include the climate impacts of producing the feed we then give to cows and other ruminants. Another reason why ruminants are particularly high emitters is because during their digestive process, they convert their food into methane, a potent greenhouse gas that they then burp.

The other large source of emissions within food systems is from fertilizer use—from how it is processed to emissions from application. Nitrogen naturally converts into nitrous oxide, which is one of the other very potent greenhouse gases.

Your findings paint a picture based on current trends. What trends did you track?


Very broadly speaking, emissions from the food system are a function of what we eat, how it’s produced, and the size of the population. We looked at these three factors and trends to date and projected out if these patterns continue over the next several decades.

What we found at a global scale is that the most important driver is changes in dietary habits; populations eating more food and eating a larger proportion of that food from animal sources, either meat, dairy, or eggs. Population growth is an important driver, but it’s not as important as dietary habit change. And while changes in food production—like having better management techniques and reducing emissions per unit of food—could counter those shifts, it would not be by a huge amount.

Now, all this is at a global scale; for any single country, that global pattern may not match up. Diets are changing, but not uniformly. For instance, diets are not changing by a huge amount in the United States, but if you go to a place like China or Brazil, countries experiencing large economic transitions, there are massive dietary shifts happening and with them those emissions are going to be driven up.

Do you feel the story of food systems emissions has been late to the game in climate change?

Rightfully, a lot of the effort, focus, and political will has targeted emissions abatement through fossil fuels. That makes a huge amount of sense. But we’re getting better knowledge about the impact food has had on the environment—and the trajectory of emissions—and starting to see, thankfully, food becoming a bigger part of the conversation.

Talk about some of the main levers for change. First, plant-rich diets: Let’s get into what you mean by that and why this diet shift makes a difference.

We mean a reduction in meat, dairy, and eggs and an increase in fruits, vegetables, whole grains, nuts, legumes, and so on. What’s critical here is that while the endpoint is similar for everyone in the world, the direction you might need to go to get there will be really different. In the United States, for instance, this shift in diets might mean a typical person eating much less meat and much more fruits and vegetables. The second thing I really want to stress is that these plant-rich diets are associated with pretty large increases in health outcomes. While for this paper we focused on climate, plant-rich diets have enormous co-benefits.

Let’s talk about another lever for reducing food system emissions; what you and your co-authors call “healthy calories.”

Approximately half the global adult population is eating too much or not enough. In certain countries the figures are even more extreme. For my co-authors and me, the healthy diet lever means—independent of a plant-rich diet—what proportion of calories are coming from fruit, vegetables, and other healthy sources of calories. We know that so many people are not getting the right amounts of food for a healthy diet. Similar to the plant-rich lever, this means in some places, eating a lot less, in other places, it will mean people eating more [healthy foods].

Food waste has gotten a lot more attention in the past few years—in part, I think, because the percent of food that is wasted is so high and because addressing food waste feels so doable.

Yes, it’s pretty shocking: About one-third of all food that is produced remains uneaten, ether because it’s thrown away, rots, or otherwise doesn’t get to the people who want to eat it. The sources differ widely by country, sometimes it’s a lack of refrigeration, lack of storage, grain silos, and so on. In the United States, a family of four wastes on average $1,600 worth of produce a year. That’s a pretty big incentive to act.

It always surprises people that if the emissions associated with food loss were a country, it would be the third largest emitter in the world.

One of the joys and complications of working on a global study is that the policy responses are going to look very different wherever you are. We talked earlier about the climate impacts of nitrogen fertilizer use. One policy that has really been effective has been the 1991 European Union Nitrates Directive. Now, when it was passed, it was designed to reduce nitrogen runoff because agricultural sources of runoff were one of the main causes of water pollution in Europe. Since then, fertilizer applications per hectare have decreased by about half, yet crop yields have continued to increase as they were before. It’s just one example of a relatively large geographically scaled policy that is working. While it wasn’t specifically designed to address emissions, it most certainly has had emissions benefits.

We can look at farmers choosing different production pathways. Like in some cases adding more crop rotations into their planning or using agroecological approaches, such as planting hedgerows, agroforestry, and more. Honestly, there really is a huge amount that can be done. But it’s important to stress that no single action is going to solve the problem.

One of the big food-climate debates is about soil carbon sequestration and livestock. What do you think about those who argue for livestock’s ability to rehabilitate soils?

We know for sure we can be doing a lot better in terms of soil carbon storage. And we are seeing incredible results from a range of strategies, like some I mentioned: planting cover crops, intercropping, and silvopasture, planting hedges between fields that can prevent soil loss—and more. All of these can help sequester more carbon in the soil, but I think the key message should be: Soil carbon sequestration is part of the solution, but it isn’t the only solution.

Now, for the debate about cows! The instances where I’ve seen cows or other ruminants’ potential to be net negative in terms of greenhouse gas emissions—after accounting for methane emissions—is over short timescales, in certain conditions, on previously degraded land. So, yes, it may be possible for cows to play a helpful role, but in a limited way. How the cows are raised matters; but how many cows you’re raising matters more.

Do you feel like any parts of your paper have been misunderstood as this complex story gets translated for the general public?

I actually think the coverage has been good. There are basically three main points and I think the media has been capturing them well: One, food matters to climate and if we continue eating the way we are, it will result in catastrophic climate change; two, there is a lot we can do; third, everyone has a role to play—consumers, businesses, food processors, everyone.

I know one question those who work on climate often gets asked is, “Are you optimistic or pessimistic?”—but, I feel I should ask the same of you.

I’m laughing because it’s an uncomfortable question to answer. We are starting to move in the right direction, but honestly, we’re not moving anywhere close to as fast as we need to. We need to start acting now. It would have been great to have made these changes years ago, but we didn’t.

Right. As they say, the best time to plant a tree was 10 years ago. The second best time is today.

Anna Lappé is the author most recently of Diet for a Hot Planet: The Climate Crisis at the End of Your Fork and What You Can Do About It, the director of Food MythBusters, and and the Real Food Media Contest. Read more > 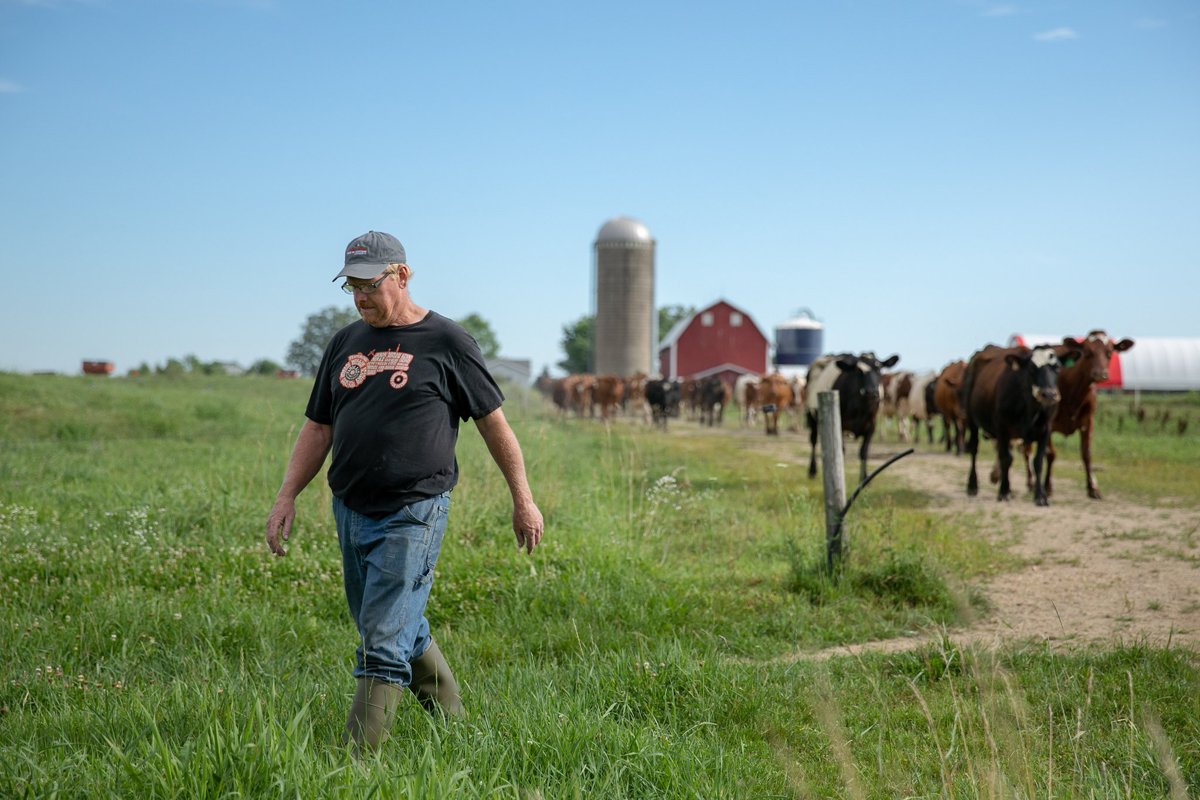 Grassland 2.0 Aims to Replace Soy and Corn Farming with Perennial Pasture in the Upper Midwest