A bill widely expected to pass in Prince George's County would be the first in the nation to phase in healthier meal and beverage options in every restaurant in the county.

The McDonald’s restaurants dotting Maryland’s Prince George’s County are take-out and drive-thru only, just as they are around the country, as part of national efforts to slow the uncontrolled spread of the coronavirus. And although the Happy Meals are still flying out the doors, an effort underway by the county council could have nationwide implications for what gets included in those boxes.

Tomorrow, the council is holding a public hearing on County Bill 071, dubbed, “The Healthy Kids Meal Bill,” which would set a five-year plan in motion to overhaul the foods that restaurants can serve children in the county. Supporters say the bill, which is widely expected to pass with unanimous support from the 11-member council, will be the nation’s most comprehensive health nutritional children’s meal policy to date.

The bill will start by requiring, over the next two years, that all food retail businesses offer water, milk, or 100 percent juice to accompany every children’s meal as a default beverage option rather than soda, which can still be requested by parents or guardians. Over the next five years, the bill will add requirements for every restaurant to offer at least one healthy side dish and then one healthy main course.

“While I was running for office, I would always hear, ‘We don’t have enough access to healthy options for meals in Prince George’s County,’” Councilmember Sydney J. Harrison, the author of the bill, told Civil Eats.

Prince George County’s bill follows a similar bill passed in Baltimore in July 2018, which was the first of its kind on the East Coast. Today, around 20 cities, counties, and states have passed Healthy Kids’ Meal legislation, but the Prince George’s County bill takes the proposal several steps further.

“We really believe that this will be a good turning point for healthy children’s meals across the country,” McIntosh said.

Although initiatives like this one have been in the works for years, proposing what the restaurant industry sees as sweeping changes in the midst of the pandemic has led to some pushback.

“Our members are concerned about the timing of the council’s consideration of legislation that would impose more restrictions on food service businesses,” Melvin Thompson, the senior vice president of government affairs and public policy for the Restaurant Association of Maryland (RAM), testified before the county council on October 15. The pandemic has been tough on most businesses and Thompson adds that, “many restaurants are still struggling to keep their businesses afloat.”

The pandemic has not been bad for fast food chains’ businesses, though. “McDonald’s, Pepsi, and Coca Cola have exceeded the profit margins in light of the pandemic,” Harrison said. McDonald’s latest quarterly earnings report shows sales increased by 4.6 percent over last year, and earnings of $5.42 billion during the three months ending in September.

Despite McDonald’s success, not all food retail businesses are benefiting during the pandemic, according to Martin Dresner, a professor at the Robert H. Smith School of Business at the University of Maryland.

“There’s certainly been winners and losers in the restaurant industry [during] the pandemic; I think a lot of these independent operations are really hurting,” Dresner told Civil Eats.

While some national chains are “doing quite well,” especially those with delivery services in-place, Dresner said local food establishments have been struggling to survive.

At the same time, councilmembers and nutrition advocates alike argue that the pandemic has exacerbated existing health and economic problems in the county, as it has around the country. Prince George’s County continues to lead the state of Maryland with over 35,000 confirmed COVID-19 cases so far, or nearly a fourth of all cases statewide. And with takeout and delivery are the only dining-out options for residents, the council sees this bill as an opportunity to improve the long-term health of county residents.

“I think that the pandemic only highlights the need for more legislation that helps to move communities in a healthier direction and provide more access to healthier options,” said Sara Ribakove, a policy associate at the Center of Science in the Public Interest (CSPI).

Although Ribakove is careful not to imply that the bill would change the county’s immediate experience of the pandemic, she notes that healthier diets can help “lower susceptibility to [chronic] diseases down the road,” including hypertension, Type 2 diabetes, and heart disease, which are prevalent in this majority-Black community.

Sydney Daigle, director of the Prince George’s County Food Equity Council (PGCFEC), says her own food landscape is “just dominated by fast food restaurants and unhealthy carry-outs.” She also believes that this bill can change consumer behavior for the better.

“I think health is at the forefront of everyone’s mind right now—in the county as it is across the nation. We see now, more than ever before, how important it is to look at policies that will improve the food retail environment for families and kids,” Daigle added.

Federico Asch, who sits on the American Heart Association’s Greater Washington board of directors, explained that research and clinical data supports the fact that high consumption of sugar is linked to increased health risks such as diabetes, obesity, and heart disease—all COVID co-morbidities.

“These are habits that start in childhood,” said Asch. Even though “Prince George’s County is taking the lead, it’s not alone,” he added. “These are health issues that affect everyone in America.”

As the bill nears its final vote, representatives from restaurant chains and the state’s restaurant trade association are airing their concerns about the bill. Philip Cronin, regional manager of U.S. government relations at McDonald’s, claimed at the hearing that the current bill would “prevent the sale of Happy Meals” in the county.

Although McDonald’s isn’t taking an official position on the bill, a statement provided to Civil Eats after the hearing proposed amendments to the bill that would “require only a few adjustments to the language as it stands and would not change the intent of the legislation.”

Cronin’s concerns largely focused on the size of McDonald’s operations. He said that making changes to its Prince George’s County menu would have ripple effects along its entire supply chain, which in turn would affect the nation’s food supply. 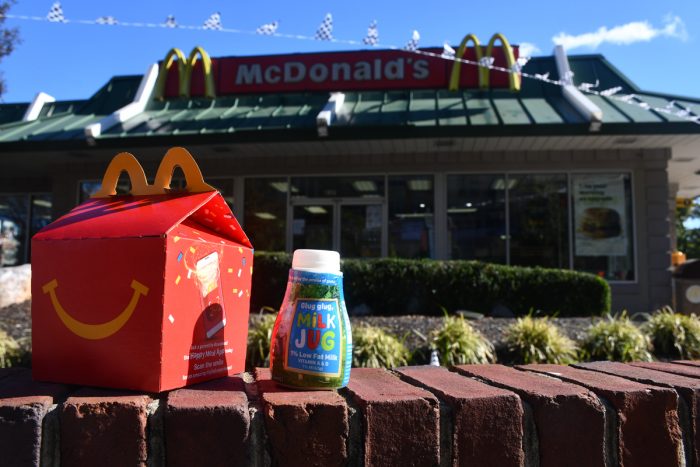 Dresner considers this situation as “the ‘McDonald’s problem,’” in that national chains are not in favor of local mandates that create potential disruptions to their ongoing operations.

“They are national chains, and they have national operations. They like to roll out products [on] at least a regional but [ideally] a national basis; so, if you have individual counties with different mandates, and I think that complicates their supply chain,” Dresner told Civil Eats.

“If we add a whole grain product requirement, we would have a significant impact on the grain supply in the United States,” Cronin said. “I know it seems somewhat far-fetched, but it is the truth, it is the reality.”

Dresner also mentioned that if McDonald’s is required to offer more healthy meal options that end up not being popular, the company could find itself in a bind.

“If they weren’t creative enough to come up with some healthy options that people wanted, they would end up with probably excess inventory,” he added.

While Harrison critiqued Cronin’s supply-chain anecdote as “not necessarily the truth,” he pointed to the situation on the ground as needing real-world action.

“We don’t have the opportunity or liberty to be anecdotal, we have to be factual, and the facts say that Prince George’s County is number one in the state of Maryland for fast food saturation,” Harrison said.

Similarly, Daigle at the Food Equity Council said that McDonald’s and RAM “didn’t come forward earlier in the process and chose to wait,” raising their objections too late to have them addressed.

“[The bill] might mean that [restaurants] have to add additional packets of apples to their Happy Meals, or perhaps fruit juices,” Daigle said. “But it’s not that they can’t offer their current menu. They have to add some additional healthy components—and they have five years to do that.”

One of Cronin’s proposed amendments included offering an additional fruit drink instead of the required half-cup of non-fried fruit or vegetables.

This doesn’t sit well with Ribakove, who noted that the standards proposed in the current bill are in line with federal dietary guidelines and incorporated ideas from industry-backed standards such as the National Restaurant Association’s voluntary Kids LiveWell program. It’s “really important to maintain the requirement for whole fruits and vegetables,”she added.

Even while it’s voicing opposition to the county bill, McDonald’s has set its own goals that, if achieved, would bring Happy Meals in line with Prince George County’s new rules. As part of its Global Happy Meals goals, launched in 2018 to be implemented by the end of 2022, McDonald’s aims for Happy Meals to contain 600 calories, 10 percent of calories from saturated fat, 650 milligrams of sodium, and 10 percent of calories from added sugar—an achievement that would meet or exceed the Prince George’s County requirements by the time the proposed law goes into effect.

Cronin acknowledges that, “when it comes to the overall nutritional requirements, we’re pretty much there,” but added that having entities outside the company “dictating what gets us to that [outcome] can be difficult for us.”

Harrison acknowledged McDonald’s national goals even amidst its efforts to change the bill, saying, “we congratulate you, you’re leading the rest of the restaurant businesses in Prince George’s County.”

Harrison explained that the local effort was not designed to create “a punitive piece of legislation.” Instead he sees it as an opportunity for business growth—one that incentivizes businesses to “be a part of the solution” when it comes to improving health outcomes in the community. Amendments to the bill during the previous hearing removed explicit mentions of fines and enforcement after the five-year implementation process, although Council Chairman Todd Turner mentioned that the county code allows the health department to issue fines for violating the law even if those fines aren’t spelled out in the bill.

The county council plans to schedule a final vote soon after the hearing. As Harrison awaits the outcome, he hopes his county can spark change across communities nationwide.

“Hopefully, Prince George’s County can lead the nation in a way to show that we are focused, we are committed, we are dedicated to creating ‘Health in All’ policies and living well,” he said.