Food Insecurity Is Rising in Detroit. So Is the Number of People Fighting It.

The pandemic has made hunger more widespread and visible, but across the city, food banks, schools, and social services have made a tremendous pivot to ensure people are able to eat. 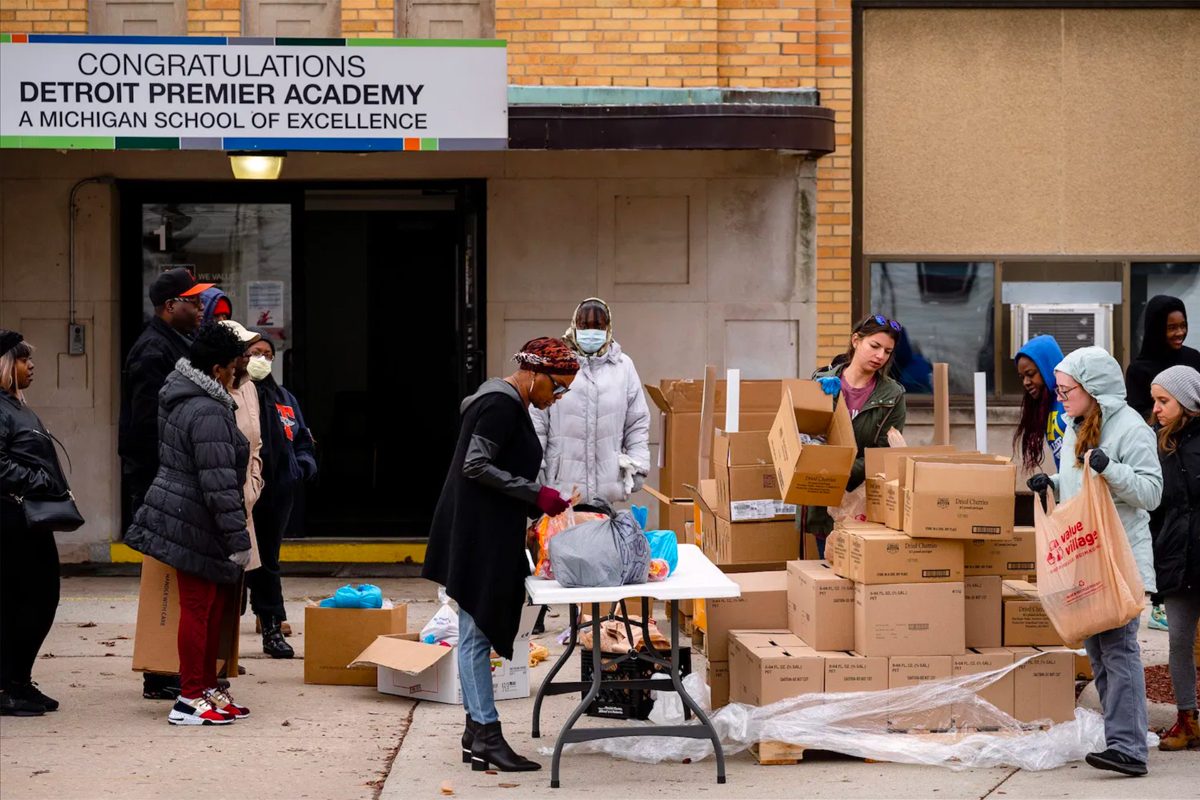 Sedans, trucks, SUVs, and minivans idling in two lines down both West Vernor Highway and 25th Street, meeting in a fork where vehicles take turns edging forward. Masked drivers unlatching trunks as someone scribbles the number of children in their home on the windshield. Grab-and-go meals at elementary schools handed out for students who take classes virtually at home, while others eat in a cafeteria.

“We wouldn’t be able to make it work without them,” a woman said of the free meals provided by Gleaners Community Food Bank. Sandy, who declined to give her full name, awaited food pickup at St. Anthony’s in a blue minivan in the Tuesday morning line on West Vernor in September. She said the food was for her niece who was supervising virtual school at home for her three children and couldn’t come herself. “It probably saves us $50 to $60.”

Each person is given 30 pounds of food, including produce and milk. “It’s real milk,” Sandy said. “What’s good is the stuff they’re giving is stuff they’re actually eating.”

This is the new picture of food insecurity in Detroit, where the coronavirus pandemic has made hunger more visible. In the last six months, food banks, schools, and social service providers have made a tremendous pivot to make sure people are able to eat.

It’s All About Logistics

Navigating closures and social distancing has required a systematic overhaul, but some changes are so effective, they are expected to endure beyond the COVID-19 era.

The U.S. Department of Agriculture (USDA) estimates that between 30 and 40 percent of the nation’s food supply goes to waste, totaling about 131 billion pounds of food each year. Meanwhile, as the pandemic took hold, food insecurity tripled in U.S. households with children, according to a report from Northwestern University’s Institute for Policy Research.

That’s particularly pressing in Detroit, where the poverty rate is three times higher than the national average. About 82 percent of public school students qualify for free and reduced-rate school lunches. While an urban agriculture movement and service providers have helped fill gaps, a 2017 report by the Detroit Food Policy Council estimates that about 48 percent of Detroit households are food insecure.

This spring’s unanticipated school closure threatened a health crisis on top of a health crisis. Federal, state, and local agencies had to figure out how to get food to families, which ordinarily includes breakfast, lunch, and, in some cases, an afternoon snack or dinner program.

The Detroit Public School Community District (DPSCD) first set up food distribution at 57 locations, providing about 18,000 meals to children each week. It then shifted to 17 sites, adding capacity as staff members were screened for COVID-19, and delivering learning packets along with the food. Increased funding flexibility from the USDA allowed the district to not only provide food for students and their families, but for any Detroiter who needed it. Two dozen charter schools were also providing about 10,000 meals a week to children.

Six months later, DPSCD now knows where the need is most urgent. That includes the Cody-Rouge area, not far from Brightmoor, “which is typically an underserved community, and not just with respect to food,” said Machion Jackson, DPSCD assistant superintendent. It also includes pockets in Southwest Detroit, she said, and near Fisher Upper Magnet Academy on the east side.

More flexible funding streams for the summer food program meant more flexibility on where food could be provided for schoolchildren by Forgotten Harvest and its partners. It also allowed bundling, so that people could pick up several days’ worth of meals at once. For families, this reduced the burdens of transportation and time.

Now, as schools open back up, DPSCD is returning to its regular meal program, with one breakfast and one lunch per student each day for those attending classes in person. But even for students attending classes virtually, grab-and-go meals are available at each school.

As more parents return to work, Jackson said, it’s important that the food is provided at each building, putting it within walking distance of as many families as possible. An extension of the “summer rules” means that the grab-and-go meals can still be provided not only to district families, but to others in need who come by on Mondays and Thursdays to pick up a bundle.

COVID-19 has not only exacerbated food insecurity in Detroit. It also spotlights the role of school districts in meeting essential human needs. “We typically distribute half a million, or a little more than than half a million, meals per month, and that goes unnoticed by the general public,” Jackson said.

Without school meals, there is hunger, especially in households that rely on single incomes or have caretakers who are elderly grandparents or foster parents. Reduced or delayed unemployment benefits are also adding financial stress to district families, while more at-home time requires more in expenses.

“If the pandemic does nothing else,” Jackson said, “it’s made the general community see how important foodservice programs in schools are, and how they sustain the city.”

Food Pantries Grow with the Need

The number of people taking part in DPSCD’s food programs dropped somewhat in July and August as more food pantries opened up. That included new sites at St. Anthony’s and New Paradigm College Prep in Southwest Detroit, both supported by Gleaners and hosted by Southwest Solutions.

Each site is open every-other-week, serving about 400-450 people, though that nearly doubled one Tuesday in late August at New Paradigm. Food distribution was combined with a backpack giveaway, and cars started lining up two hours before opening, stretching bumper-to-bumper for nearly a mile.

One woman named Sylvia, a custodian for Detroit public schools, picked up food for her four children and her sister’s three children before weeping in relief as she got in line for school supplies.

“There was an extraordinary response,” said Steve Palackdharry, communications director at Southwest Solutions.

While the food pantry has run out of food a few times, Gleaners monitors the need and adjusts for it.

Given average household size, Palackdharry estimates that the food reaches about 24,000 people a week. While most people pick it up in their cars, others walk up from nearby affordable housing units.

About two-thirds of those who come out to St. Anthony’s are Latinx families who work in restaurants, factories, and construction—all industries that have been hard hit this year.

There are others coming out to St. Anthony’s and New Paradigm on Tuesday mornings: census workers and people registering voters. With few opportunities to reach residents face-to-face, the distribution sites have become a de facto civic hub. “Much more than food is happening at these events,” Palackdharry said.

Pre-COVID-19, about 17 grocery rescue trucks left the Oak Park warehouse of Forgotten Harvest each day. They picked up around 400 pounds of food from a dozen or so retailers and delivered it to partner agencies, who then distributed it to people in need.

They also gathered surplus food from manufacturers, caterers, and others, as well as the Forgotten Harvest farm, and repackaged it all into family quantities at its warehouse. Altogether, this system delivers about 46 million pounds of food a year into the community, with the three busiest pantries in Warren, Romulus, and Oak Park.

As one of the foundational forces in getting food to people in need, it was especially important for Forgotten Harvest to adapt quickly and well.

Six months into COVID-19, the organization is still adapting to the new normal. By late August, the food rescue was not yet back up to 17 routes a day, but Spicer said it was getting there. Forgotten Harvest is also working with about 95 percent dry food, which was “not the case pre-COVID.”

But Forgotten Harvest accelerated what had been part of its long-term plan to meet immediate needs. It opened a second building to pack food boxes that will “still provide good social distancing even two years from now, and just as much food,” Spicer said.

Partner agencies typically rely heavily on seniors who volunteer to distribute food, but since they’re especially vulnerable to the coronavirus, many haven’t been able to continue their service. Corporations also routinely send volunteer groups to Forgotten Harvest, but that too has been pulled back for safety reasons. Altogether, that means the loss of entire distribution sites.

“We have pockets of areas just not being served right now,” Spicer said. “We’re trying to get back to a steady place,” partly by hiring temporary staff.

Each site serves up to about 700 families in drive-through lines per week. Families of five or more get two of the 20-pound boxes, each a mix of protein, grains, fruit, vegetables, and dairy.

These changes didn’t happen seamlessly. Initially, Forgotten Harvest set up a site at TCF Center downtown to build food boxes, but a week later came the news that the space would be used as a medical facility for COVID patients instead.

“I burned through three tanks of gas looking for another site,” Spicer said.

Plan B was a former Kmart tech center in Royal Oak. Spicer’s voice caught when he spoke about the workers that put in a huge amount of time and effort in moving the entire operations twice in two weeks, along with adjusting for a thousand other pandemic shifts and their own personal needs, all to make sure people were fed.

The people Forgotten Harvest serves often find out about the sites through an email or a social media post. One woman was driving home from a doctor’s appointment and did a U-turn when she passed a distribution site.

“We see a lot more unemployed,” Spicer said. Michigan’s unemployment rate in April reached 24 percent and, according to the most recent numbers, is now closer to 9 percent. Detroit’s official unemployment rate is more than 12 percent.

Spicer added that Forgotten Harvest is also seeing “a lot more working families where this is typically their first time at a food pantry.”

While it’s not yet clear how or when the pandemic will end, Spicer hopes that society doesn’t just revert back to old patterns. “When the economy is thriving,” he said, “what we see is human needs and human services really take a backseat to other philanthropy.”

But food insecurity has always been an issue. And it has life-and-death stakes. “I hope the focus on human need continues,” he said.