With commercial real estate at a premium and out-of-town speculators holding on to land in Detroit, Black farmers had to join together to secure land access.

It took them 20 minutes to reach their goal. The campaign ultimately raised nearly $55,000.

Tepirah Rushdan was talking to her best friend about how they could help Black people in Detroit own the land where they farmed, and they just decided to go for it. The two urban farmers decided to create a GoFundMe to raise $5,000 to do that.

“That demonstrates what the need is,” said Jerry Hebron, executive director of Oakland Avenue Urban Farm. She joined Rushdan on the project, called the Detroit Black Farmer Land Fund. “When you have Black farmers trying to make a living, we don’t need them to be land insecure.”

Providing Black farmers with land security was one of the reasons Hebron, Rushdan and representatives from the Detroit Black Community Food Security Network (DBCFSN) D-Town Farm launched the GoFundMe campaign.

Rushdan, who is also co-director of the nonprofit Keep Growing Detroit (KGD), told Detour that while the impetus for the project may have been an immediate need of a few, the traction showed her she could tackle a more entrenched problem: the disparity in land acquisition between Blacks and whites.

Detroit Has Plenty of Black Farmers, but Few Who Own Their Land

Through her work at KGD, Rushdan helps track the number of gardens and farms in Detroit and who operates them.

“We noticed that more white farmers were getting the land than Black farmers,” Rushdan said. “Maybe it was because they had the money and the extra time to go through the hoops to buy the land. I didn’t like that. I had a lot of Black farmer friends who were rocking it, but they didn’t own the land.”

With commercial real estate at a premium and out-of-town speculators holding on to land in Detroit, Rushdan said Black farmers feel more at risk of losing access to land they farm on but don’t own. She cited the controversial sale in 2012 of more than 1,500 non-contiguous city-owned lots to Hantz Woodlands LLC at about $300 per lot. Critics called it a land grab. Though Hantz planted fruit trees on the eastside land, many have criticized the development.

“[In many instances] residents were taking care of the land, and to get it taken from under them was heartbreaking,” Rushdan said. “It’s just one of those systemic inequities.”

The deep roots of land inequity

“There has been a historical dispossession of land from Black farmers, and redlining is a part of that history,” said White, an associate professor of environmental justice at the University of Wisconsin-Madison.

Another author, Pete Daniel, concluded in his book “Dispossession: Discrimination against African American Farmers in the Age of Civil Rights” that the U.S. Department of Agriculture historically created rules for land acquisition that discriminated on the basis of race. This discrimination extended to the denial of loans and access to capital support programs. Daniel found that Black farmers also lost their land through violence and intimidation during the civil rights era when laws were supposed to have helped their progress. The inequity resulted in a 93% decline in Black farmers between 1940 and 1974.

“A land fund is often needed (to remedy) these types of situations,” said White, a Detroit native and a past president of the DBCFSN board of directors.

How the Fund Will be Funneled to Dozens of Farmers

The Detroit Black Farmer Land Fund campaign ended in July this year, but people continue to donate money directly to the CashApp account or by check. Meanwhile, a committee including representatives from Keep Growing Detroit, Oakland Avenue Urban Farm and D-Town Farm will decide how to disburse the funds. They will select 60 applicants based on factors like farmer experience and their plan for the land. The committee is requiring grantees to make a five-year commitment to grow on the land.

The group is also providing technical assistance to the growers in navigating the purchase process. Rushdan said in times past, it was difficult helping the 1,900 KGD members figure out who owned land and how to purchase it. Purchasing land sometimes requires hiring a lawyer and standing in line for hours at a city government building—money and time some Black farmers, who often work full-time jobs and raise a family, just didn’t have.

The fund is also working with the city to make the process of buying land smoother. At the end of August, the city announced a modified process for people who want to buy land through the Detroit Land Bank Authority, which owns about 90,000 parcels in Detroit. Detroit Mayor Mike Duggan said the goal is to transfer land “from city ownership into ownership of the people who live in these neighborhoods.” 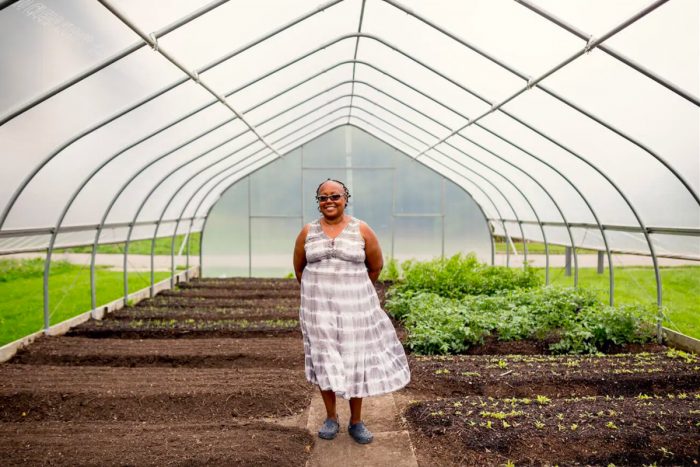 For years the city has sought to do that through the DLBA Side Lot program which allows Detroiters to purchase the lot next to their home for $100. DLBA executive director Saskia Thompson told Detour that the Land Bank board of directors approved The Vacant Land Reuse strategy to give the DLBA the ability to sell other vacant land beyond side lots. Starting next month, residents can buy lots within 500 feet of their homes for $250; nearby oversized lots (between 7,500 and 15,000 square feet) for $200; lots with accessory structures, like sheds, for $250; and infill housing lots to construct new homes.

Land Equity, Even After the Fund Runs Out

The fund is not enough to purchase land for all Black farmers who need help, and the farmers have other needs, like taxes and supplies, to consider. But supporters hope that over time, and with the support of city programs that make land more accessible to neighborhood residents, the city can work towards a more equitable distribution of land.

Urban farmer Sherrie Smith said the Detroit fund and its partnership with the DLBA is promising. “The Black Farmer Land Fund is important because it gives people a chance to grow food in their community,” said Smith, who grows on the grounds of Focus Hands, a community garden on Detroit’s west side owned by Focus: HOPE. “The thought of ‘I can actually buy this’ will increase and empower a lot of Black farmers. People don’t have that much saved up. [The fund] will help a lot of urban farmers overcome that hurdle.”

Smith, who last year was certified as a master gardener, began growing in milk crates because there was not enough space around her home to grow produce. A former Focus: HOPE employee, she began volunteering at Focus Hands when she learned it was untended.

Oakland Avenue Urban Farm’s Hebron said she appreciates being able to work with the DLBA after farming for more than a decade on land that took the city 15 years to sell to the North End Christian Community Development Corporation. The city “didn’t think farming was the best use of the land,” Hebron said.

But with the city’s new commitment to sell to residents, she’s hopeful the fund will be able to help growers like Smith.

“If we are looking to have food sovereignty then there needs to be land security,” she said. “It’s a matter of equity.”

Rhonda J. Smith is a journalist in Detroit. She holds a bachelor’s degree in journalism and a master’s degree in communication, and has been a writer and editor for more than 25 years. Her work has appeared in outlets including The Detroit News, Newsday, Chicago Tribune and Wayne County Community College District publications. She was a 2019 Detour Detroit Emerging Voices Fellow. Read more >